The Comic Convention has taken many turns since its timid beginnings in Spain many years ago. Recently the event changed, taking a more commercial ando boastful turn, becoming what is now Heroes Comic Con. This popular event celebrates its second edition in Valencia from 22 to 24 February.

The pavilions 7 and 8 of the Feria Valencia will be the stage that will host the different activities, doubling the assistance capacity of the previous year. On this occasion the event will offer several new features, such as a Panini Marvel content area and spaces dedicated to children’s comics, French comics and Valencian artists, such as Paco Roca and Ana Oncina, the author of the poster of Heroes Comic Con Valencia 2019. 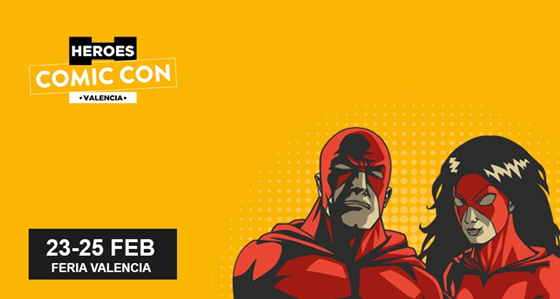 Conferences, talks, workshops, exhibitions, games, activities and stands from different stores of the comics and fanzines sector are just some of the attractions that this festival dedicated to comics will hold. But a comic convention is not complete without its guests. This year’s star will be Joe Keery, the American actor and musician that you’ll remember for his portrayal of Steve Harrington on Netflix series Stranger Things. You can buy signatures and photos with Joe Kerry for a small fee. There will also be great artists from the national and international comics, such as the scriptwriter and draughtsman of DC Comics Jon Bodganove, the draughtsman of Marvel and DC Carlos Pacheco, the Valencian writer and scriptwriter Carlos Pacheco, the draughtswoman Tula Lotay and the comic author Cristina Durán.

During the celebration of the event will be exhibited the collection of originals of “Where are you?”, by Bea Enríquez, winning work of the 11th FNAC-Salamander Grapchic Award. It is an exhibition of color proofs, sketches, character designs and various work materials that tell a story about relationships with things and other people from the point of view of the author. In addition, the attendees will be able to play different Xbox One games in the video game zone. Some available titles will be Crackdown 3 and Forza Horizon 4. Do you feel like dancing? There will also be a dance area of ​​Fortnite to move to the rhythm of his Battle Royale, and the classic cosplay contest could not be missed, where the participants get into the skin of their favorite heroes, characterizing themselves as them.

The event will take place from Friday 22 to Sunday 24 February, from 10:00 a.m. to 8:00 p.m. Check the program of the event in the next few days so you can go to all the activities . If you do not want to miss your favorite artists and the most fun activities, buy now your tickets for Heroes Comic Con Valencia.

Previous articleMedifit Reha, your international centre for physical rehabilitation on the Costa Blanca
Next articleGet ready for an experience of delicious sensations with the new dishes of the Kanaiia restaurant