Vall de Cavall: For the love of horses

If you’ve ever eaten at the fabulous Restaurante Vall de Cavall at Gata de Gorgos, you’ve probably enjoyed watching the horses in the paddocks and taking in the wonderful views of Montgo Mountain, across the campo surrounding this beautiful corner of Spain. It feels like it’s always been part of the landscape, but back in 2006, there was nothing there but a small country house nestled in four hectares of mostly undeveloped land.

Belgian national 3-Day Eventing rider Peter Bastijns and his wife Ines had recently moved to Spain from Belgium with their family.  All was not as good as it should have been, and they experienced some difficulty in adjusting to their new lifestyle.

Peter was regularly flying to Belgium for competitions, and Ines was worried that he’d end up in hospital or worse, because eventing gets more dangerous as the riders and horses get older. As for Peter, he felt he was missing out on his connection with his beloved horses, as he was just flying in to ride, rather than spending time during the week training and exercising them. And Ines and the rest of the family missed him while he was away – as he missed them. 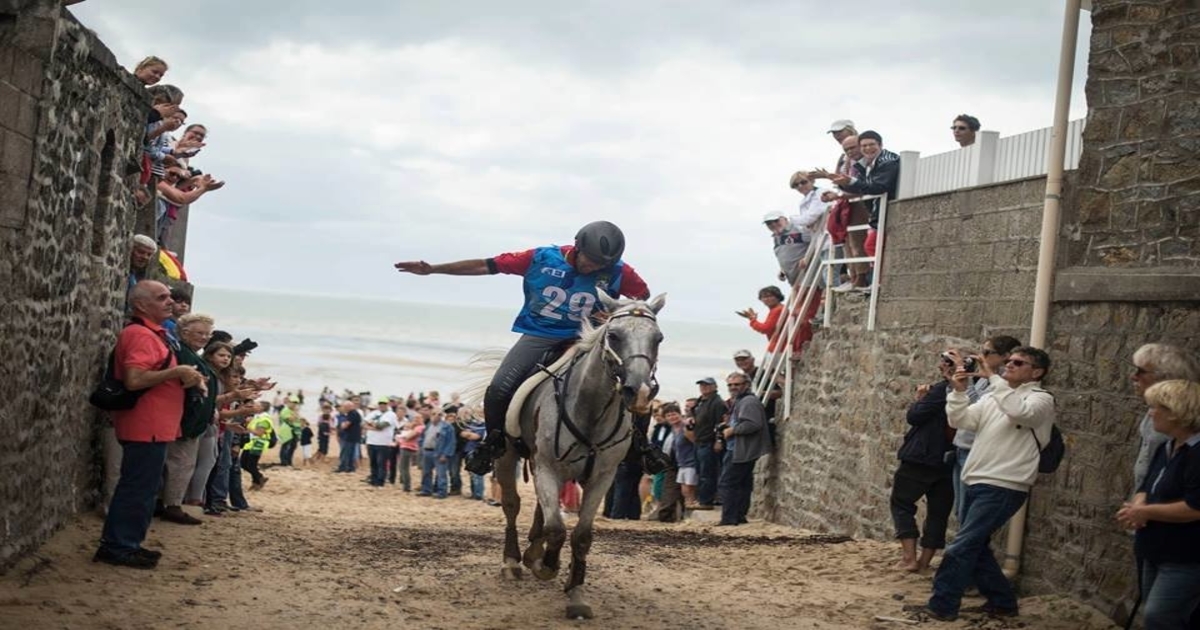 Something was missing – and Ines’s father Andre knew exactly what it was! He offered to build a stables and livery yard, so Peter could spend more time with his own horses. At the same time, Peter made the switch from eventing to endurance riding. Not only was it a safer prospect, it was more of a team thing. Ines and Peter are a very close couple who love doing things together, and she was able to travel with him to competitions, and follow the route as an ‘Assistancia’ – bringing water for the horses at approximately 40 kilometre intervals.

Endurance rides can cover anything from 80 – 160 kilometres, and it’s as much fun for the team of groom and assistant as it is for the rider. In fact, Ines refuses to be left behind, even though they may face a drive of up to 1,000 kilometres to the various competition venues. Peter jokes that:

If Ines isn’t in the car, it just won’t start!

Vall de Cavall first opened the stable doors in 2008. These days, it’s also well known for the fabulous food in its large restaurant, but back in 2008, it was just about the horses.  It still is, but Ines and Peter have adapted as they’ve gone along, which is why they have no trouble filling their stables and their restaurant! 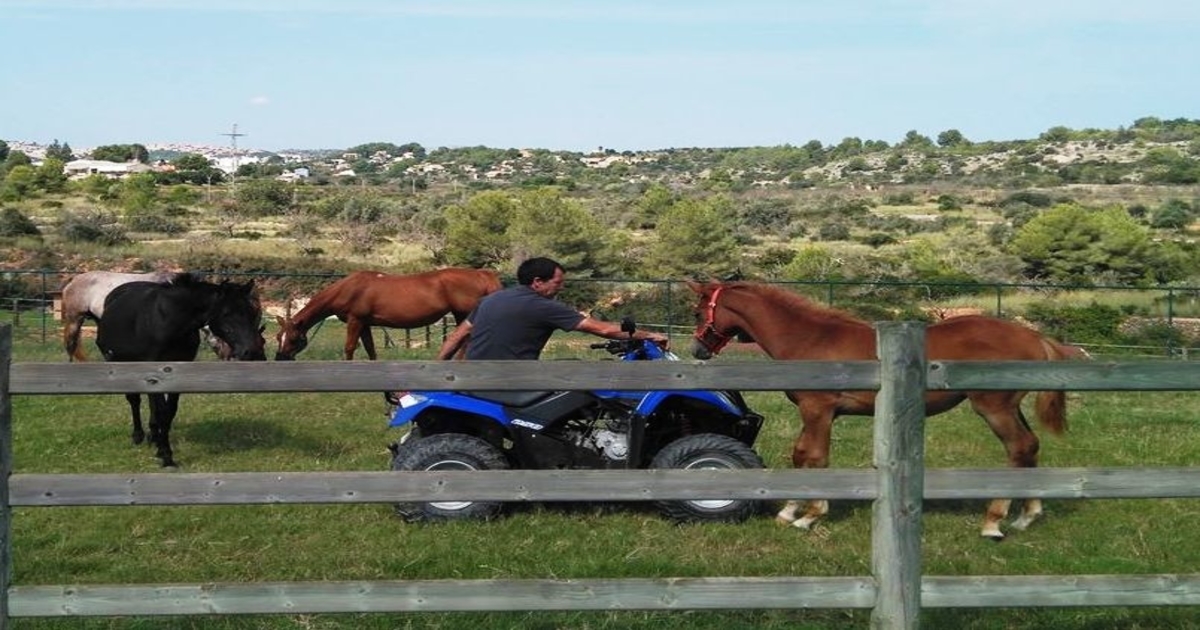 Somebody suggested it would be a good idea to have a small bar/restaurant, so that when clients came to see their horses, they could get a drink and some tapas. Peter didn’t really want to get into that, but he could see it made sense. Vall de Cavall is now occupying eight hectares of land, as the business has expanded. There’s nowhere close where people can get food or drink, so it makes sense, practically and economically.

The small house on the land was converted into a restaurant, and there were just 30 covers available. As it became more and more popular, it outgrew its original premises into the spectacular, typically Spanish building it is now. There are guest rooms available, and a swimming pool, so if you love spending time with horses in the countryside, it’s a great place for a break once the lock-down is over and Spain is safe again. And there’s plenty of space, with 50 covers indoors and another 90 on the spacious outside terrace.

Peter and Ines’s story is something of a fairy tale, but it hasn’t all been plain sailing. Although the livery yard was an immediate success, with all the available spaces for horses taken within six months of opening, 2008 wasn’t a good year for anybody. As the global financial crisis took its toll, most of Vall de Cavall’s mainly English clients sold their horses or moved back to the UK. 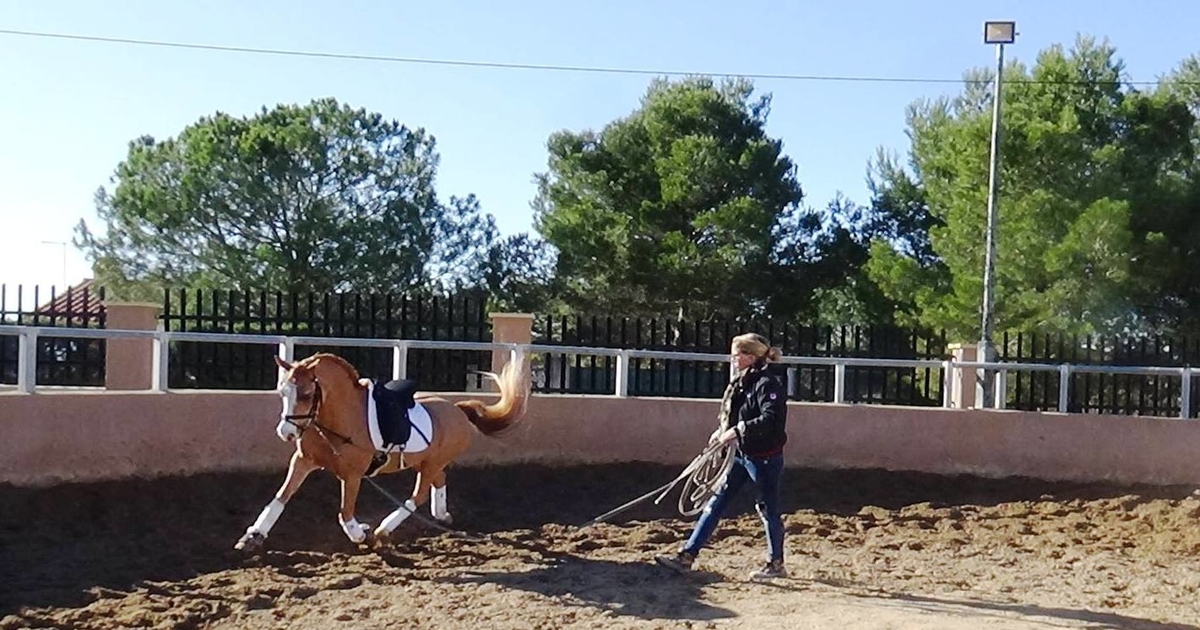 Within a year, though, the yard was full again, although the demographic was very different, as Peter explained:

When people came back to Spain with their horses, there were all nationalities, from all over Europe and beyond. Right now, we have 40 horses liveried here, and only three are owned by Spanish clients. There are Russians, Finns – lots of nationalities are represented here, and all the owners are full time residents in Spain. That’s great for us and the horses, as they see their owners regularly, and the owners become friends, not just clients.

So, what sort of people own and stable horses? Probably not what you might expect. Around 70 per cent of Peter’s clients are over 60 years old, and they are almost all women, with just one retired gentleman stabling his horse there. Some of the younger owners are competitive, and take part in dressage competitions. Laura – who works at Vall de Cavall as an autonomo –  trains riders and horses for dressage, as well as competing successfully herself. Laura also gives riding lessons, but only to clients who stable their horses there and want to brush up their equestrian skills.

Peter and his team are passionate about what they do, and this is clear in the services they offer. They do not hire out horses for riding or competition – they prefer to help their clients build the best possible relationships with their horses. The emphasis is on having fun, and that goes for everyone who comes to Vall de Cavall, whether they have two legs or four!

At the moment, because of lock-down, owners are not allowed to visit their horses, but Peter, Laura and the five grooms who are allowed to work with the horses and exercise them for their well being have it covered. The horses are walked and exercised on lunge ropes, and have plenty of time to play in the paddocks too. For the horses, lock-down is not much different to normal, except they don’t have to train, and they don’t get ridden so often. Some of them are pretty happy about that, and seem to be thriving on it. 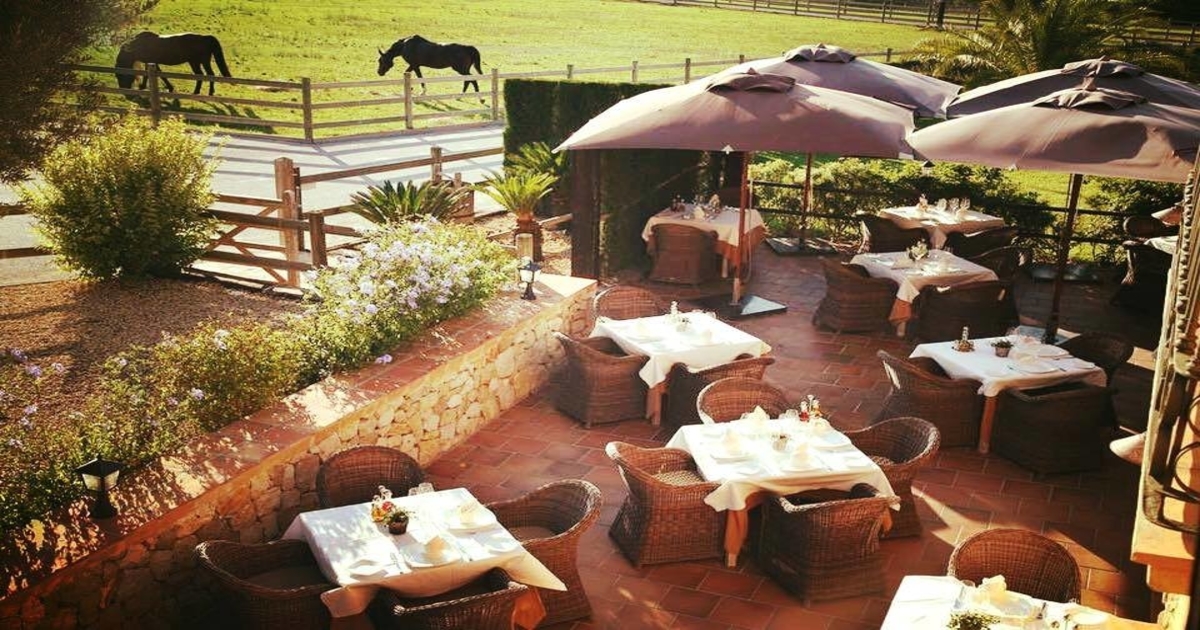 Laura sends regular photos and videos to each owner, so they can see their horses are happy and well. She’s also created an owners group on social media, so she can answer questions, offer advice, and just generally keep in touch.

Peter has won several championships in his long career in equestrian sport, at local, national and global levels, and is keen to encourage others who want to compete. However, in Spain, it’s necessary to belong to both national and Valencian federations, so it can be a very expensive project for maybe three or four competitions a year.

Peter has set up a ‘Liga de Hipicas Sociales,’ which essentially means that those who subscribe to it are able to compete regularly, but don’t have to pay enormous amounts in federation fees, because it’s basically for fun. That said, this is no ‘competition lite.’ Dressage performance is judged by the same judges, at the same standards, as federation competitions. The difference is, Peter’s events attract around 100 subscribers, while federation competitions are lucky to get 25 – 30 riders. 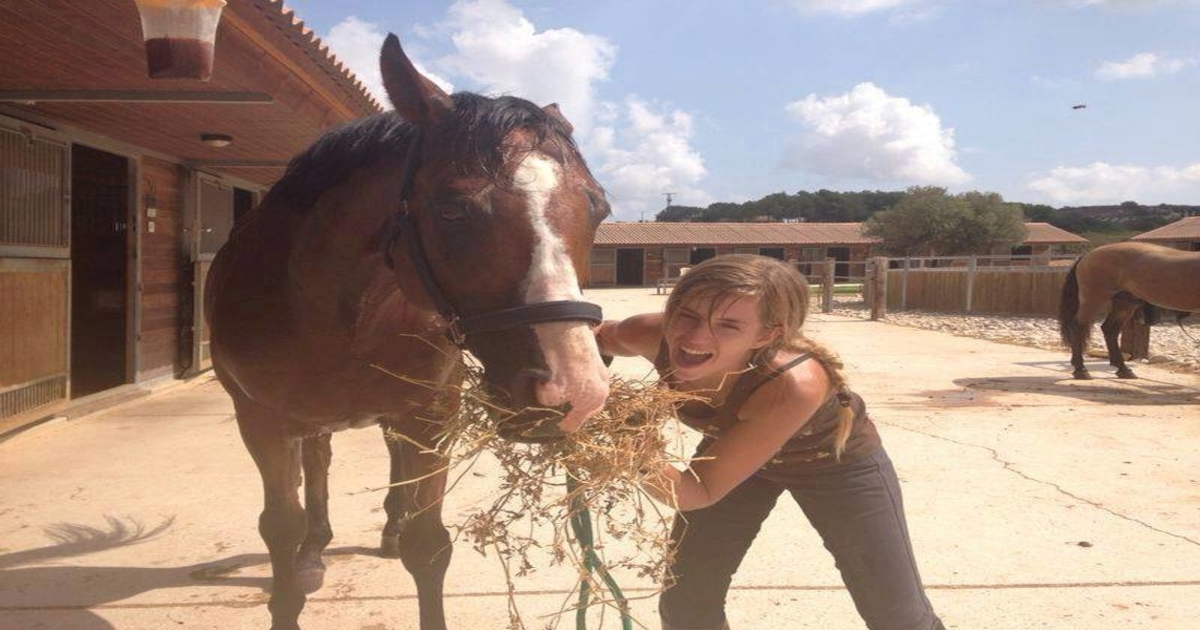 The great thing is anyone, from any age group, can take part in dressage, and it’s popular among the children. Although, as Peter says, girls tend to drift away from riding around the age of 17, then come back again later, maybe in their 40s. Why is that? Let Peter explain:

They discover boys, and then they leave the horses for a while. I should know. I have six daughters of my own!

There is so much more to Vall de Cavall than the livery yard and restaurant. This is a thriving community of horse owners and professional riders who work together for the sheer love of horses. That’s obvious from talking to Peter, and seeing the photos and videos on their social media.  Vall de Cavall is more than a business – it’s a family of horse lovers, providing advice, care, friendship and fun for everyone who is fortunate to come through their gates. 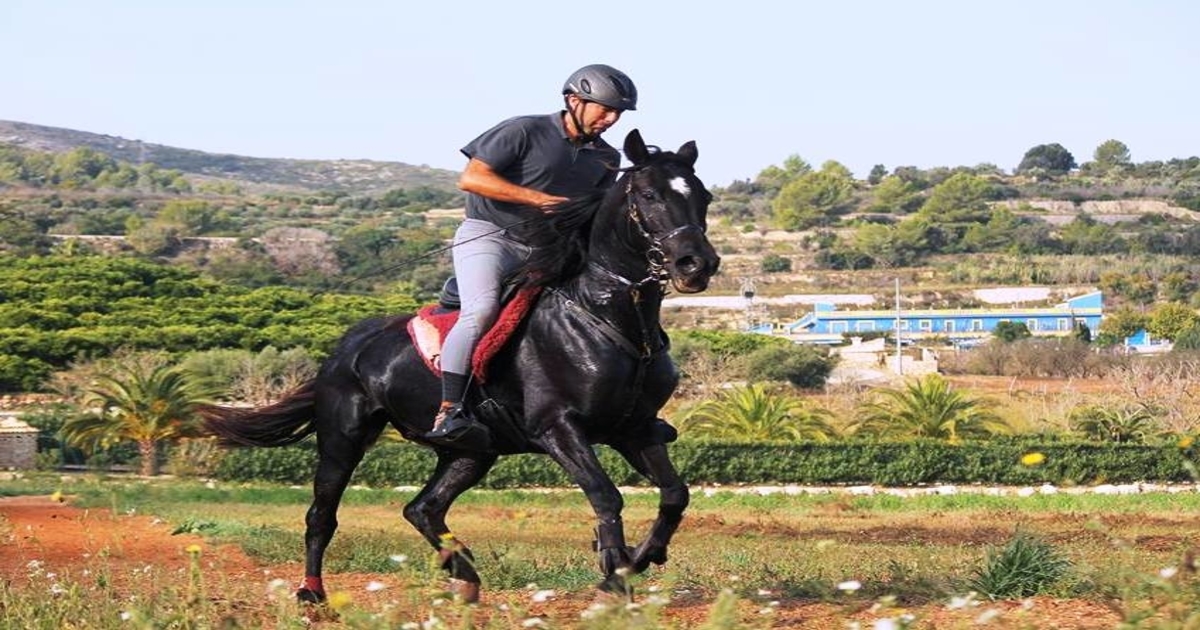