Barcelona has an extensive network of Michelin-starred chefs. A total of 31 stars in 22 restaurants form the core of this prestigious culinary network in Barcelona. 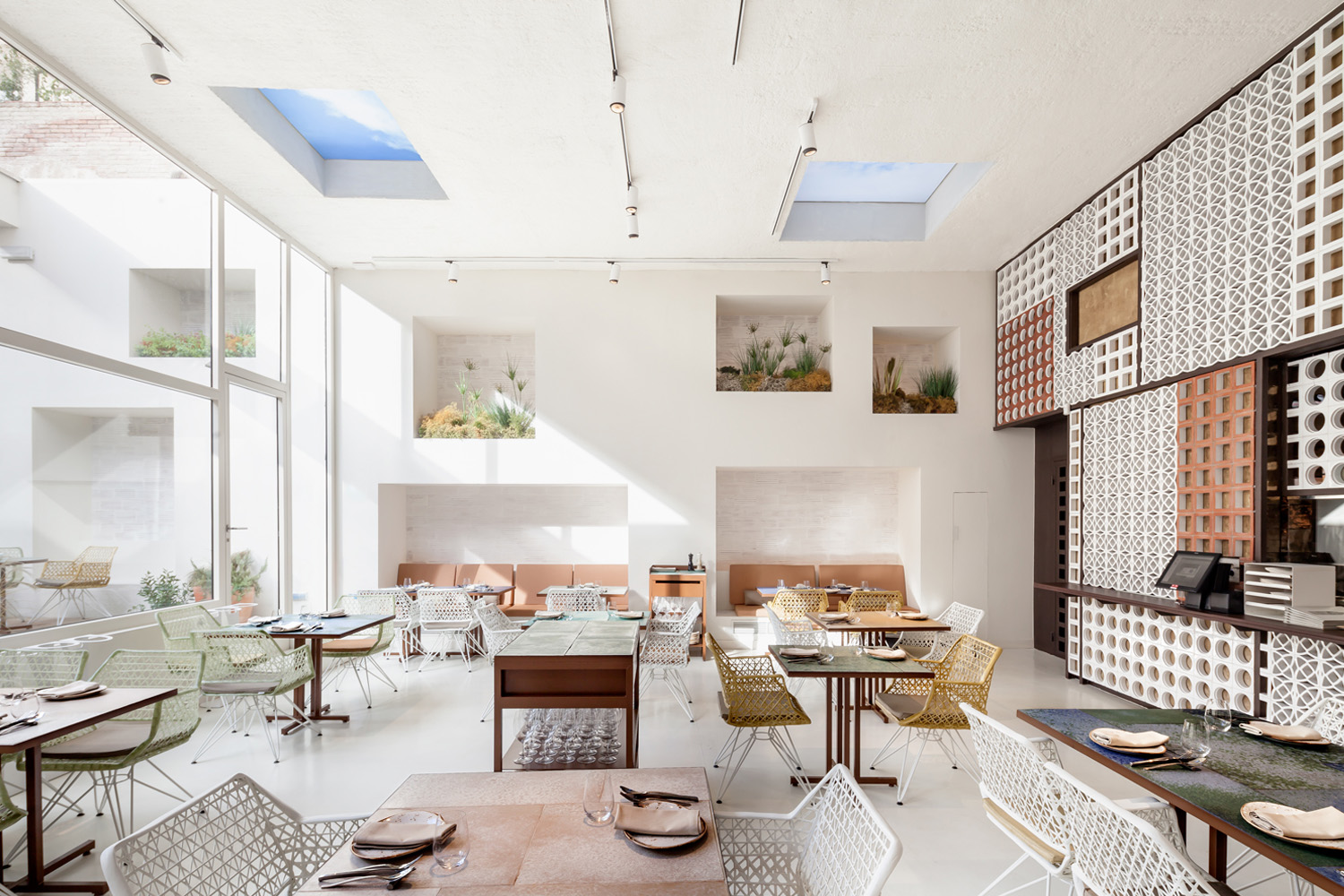 Barcelona continues to be the city with the most Michelin stars in Spain. The prestigious gastronomic a has awarded 32 stars to 22 restaurants in Barcelona in the Michelin Guide 2020, which maintains Barcelona as the capital of this award in the country, beating even Madrid.

Three Michelin stars indicate exceptional cuisine that justifies the trip in itself, two stars indicate first-class quality in its type of cuisine, and one star designates a restaurant that is very good in its category.

The Catalan capital remains at the forefront of the international gastronomic avant-garde, as demonstrated by the total 33 stars that the city holds in 23 restaurants. For example, Cinc Sentits continues its upward trend and has been awarded its second Michelin star. At the end of last year, new names were also added, such as Artur Martínez’s Aürt, which has maintained this recognition due to the consolidation of its gastronomic proposal.

Heed our warning, these are not restaurants for a mere casual outing, they’re luxury restaurants, selected by the world-renowned Michelin Guide to enjoy on special occasions.

Have you ever thought of treating a loved one to a Michelin star dinner? Without further ado, here are the best eight Michelin star restaurants of Barcelona in our opinion. The prices mentioned with each restaurant is the average price per head.

Lasarte was the first restaurant in Barcelona to be awarded three Michelin stars (2017) by the chef with the most stars in Spain: Martín Berasategui. Although the Basque chef delegates here to the Italian Paolo Casagrande as head chef. This is also where the tasting menu for the Mobile World Congress comes from.

In Lasarte, you can enjoy dishes such as grilled roe deer with black truffle cream, roast kingfish with clam pil-pil, crab and champagne, or Wagyo ravioli with glazed eel, iodised cream and caviar.

Apart from Berasategui, the Italian chef Paolo Casagrande is in charge of the day-to-day running of the restaurant, whose highest elegance and creativity are present in dishes such as the apple millefeuille, foie gras and eel, and where the surprising aesthetics never take precedence over a brilliant combination of flavours. 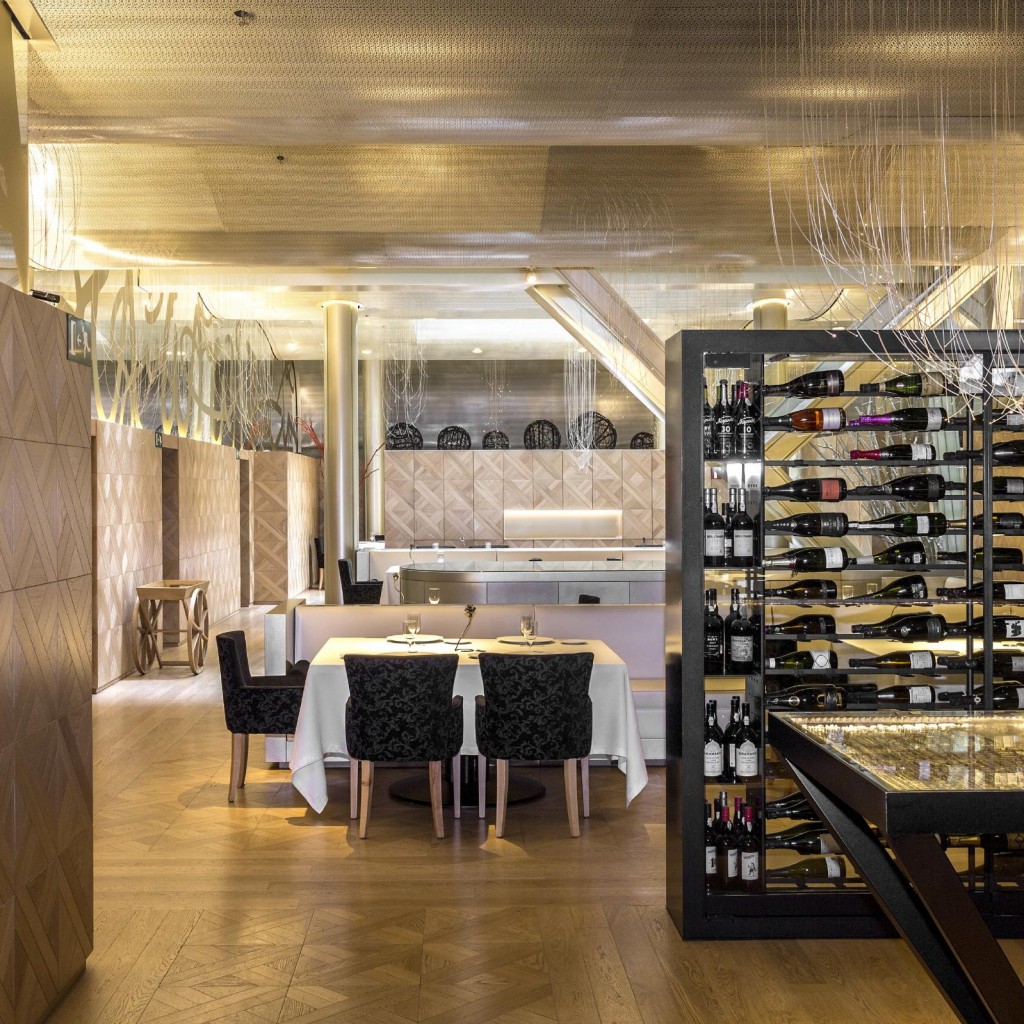 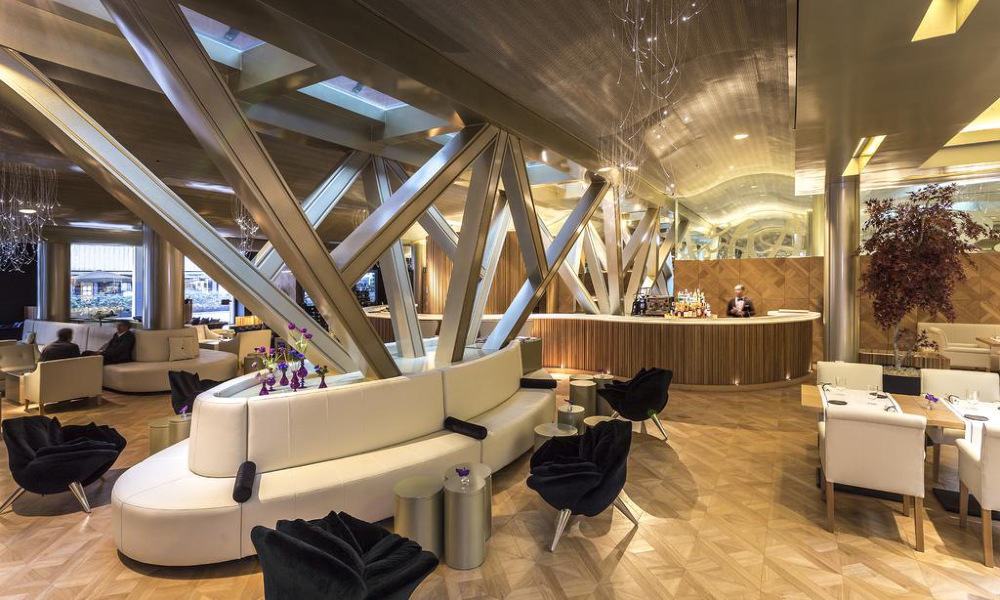 The prestigious ABaC restaurant has also been awarded 3 Michelin stars and was nominated for Best Restaurant in Catalonia 2011, seating 56 diners. It’s located in the newly built pavilion, in contact with the garden. Indoors and outdoors coincide through large windows, as you can see in the photograph on the right.

The chef of this restaurant is none other than the famous Jordi Cruz, also known for appearing in the MasterChef programme.

The menu is divided into 50% traditional and 50% avant-garde. One of its most popular dishes is the “Pantera Rosa” (the Pink Panther)  a sort of deconstruction of the classic children’s pastry. 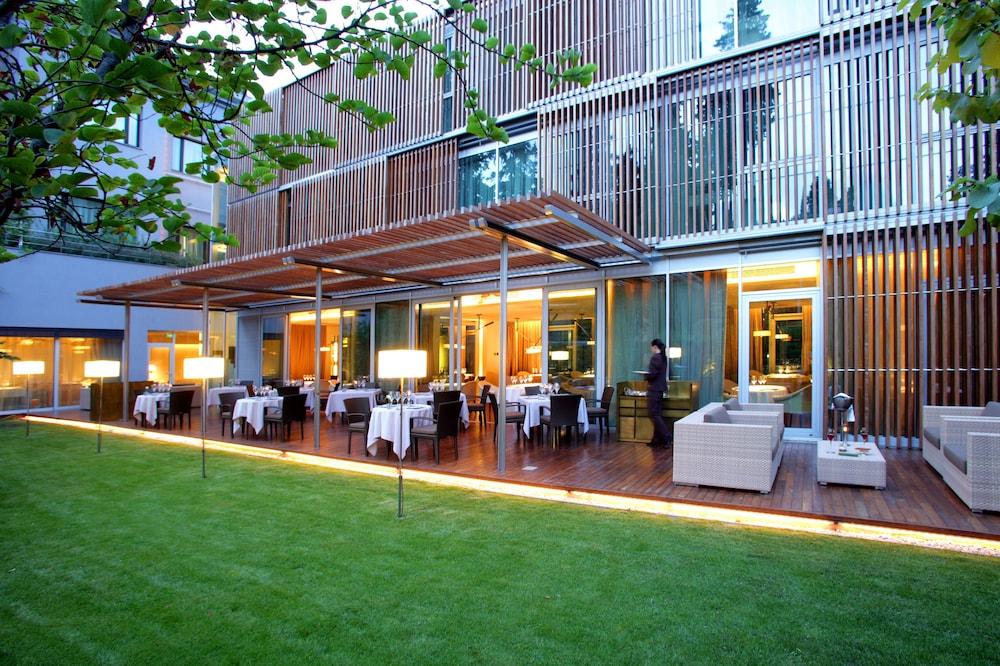 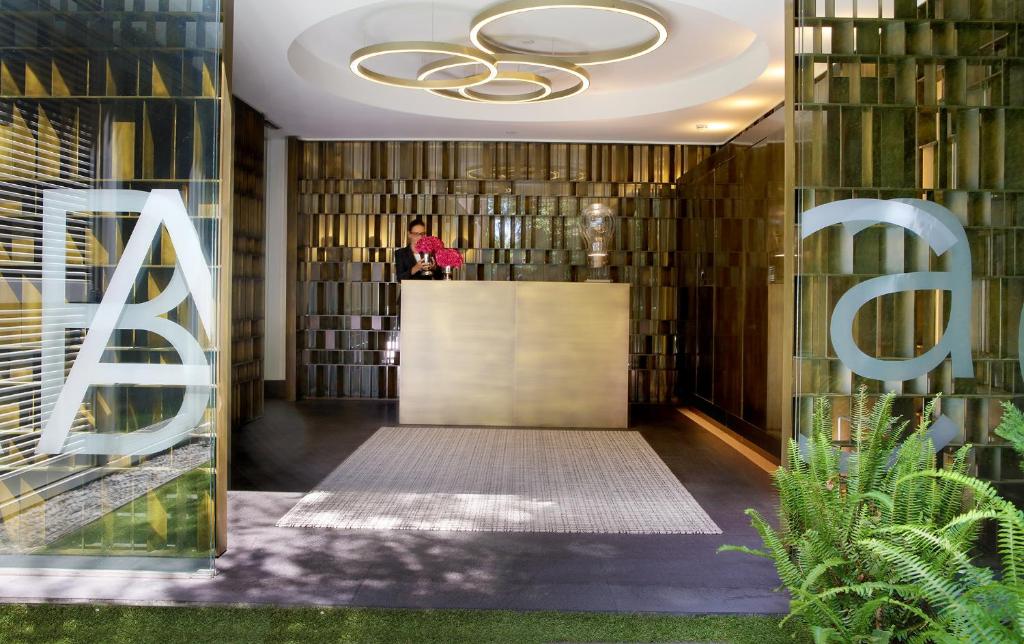 It has one Michelin star and is run by Fran Agudo in the kitchen and Joan Romans in the dining room. It should be noted that the chef and creator of this restaurant is Albert Adrià, the youngest of the Adrià brothers.

Diners are treated to a fun experience through contemporary and traditional tapas. The menu is constantly evolving and changes according to the seasonality of the products available. They don’t have a tasting menu but they can prepare a tailor-made one for you, depending on your personal tastes.

Albert Adrià’s innovative proposal is constantly growing and continues to maintain its star since it was awarded in 2014 for the first time. 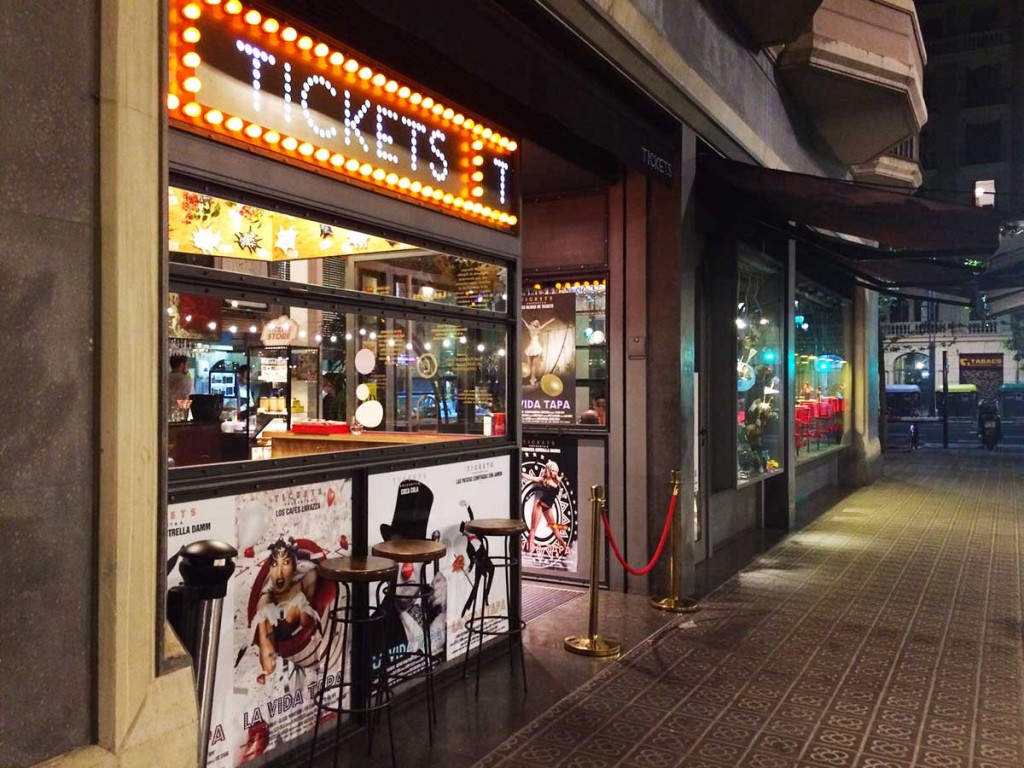 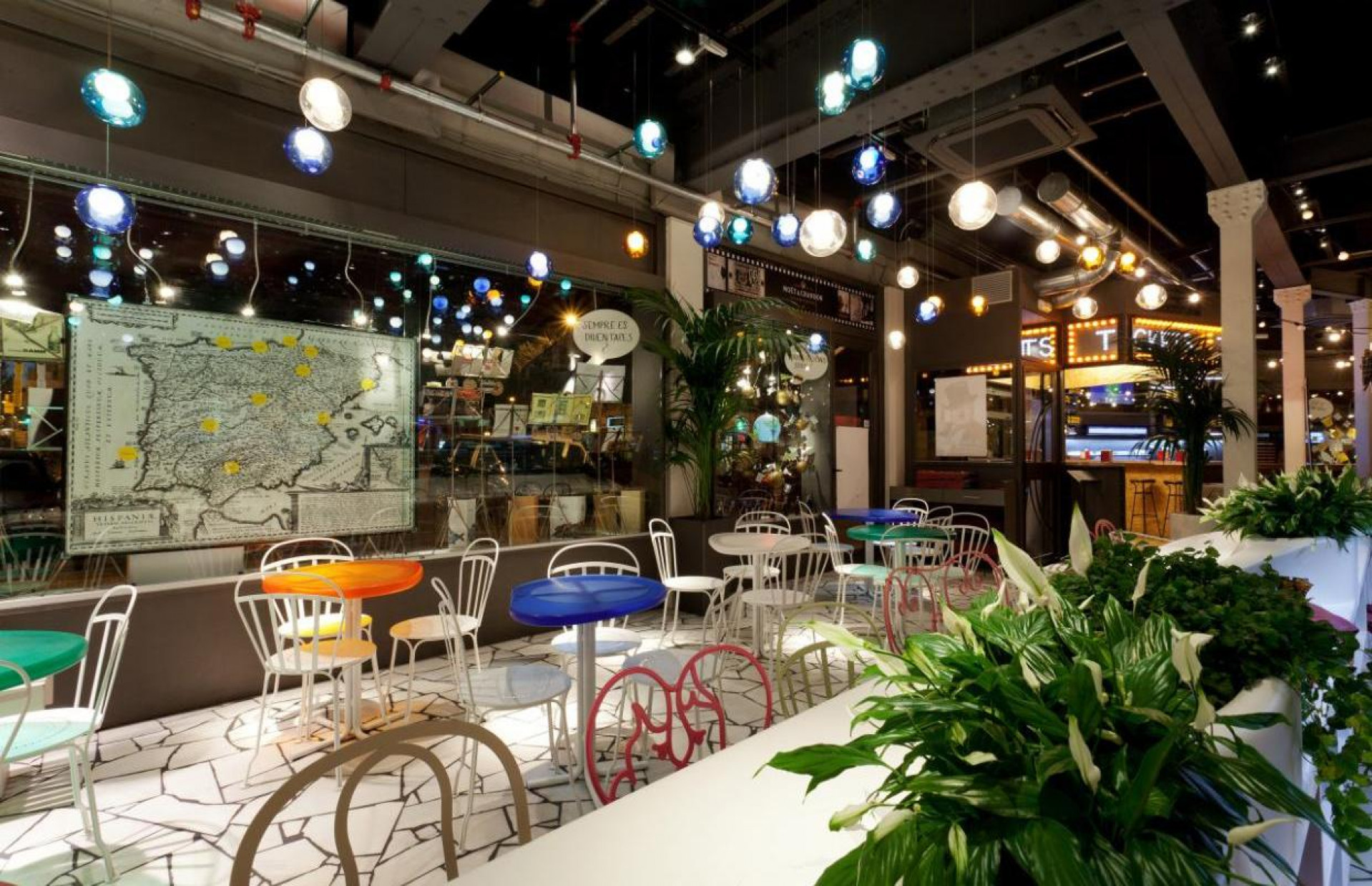 Found in the Monument hotel, Oria is next door to the Lasarte. By comparison, Oria is the informal anteroom of Lasarte, but it’s in a different universe from the fine tapas catalogues within the more affordable part of the great luxury

The restaurant space has a modern and sophisticated air, well integrated into the hotel lobby thanks to the inverted pyramid structure. The space is characterised mainly by its large height, by a skylight that floods the space with natural light and by a swimming pool with still water that tidies up the surroundings.

You can choose from the à la carte or the executive menu. 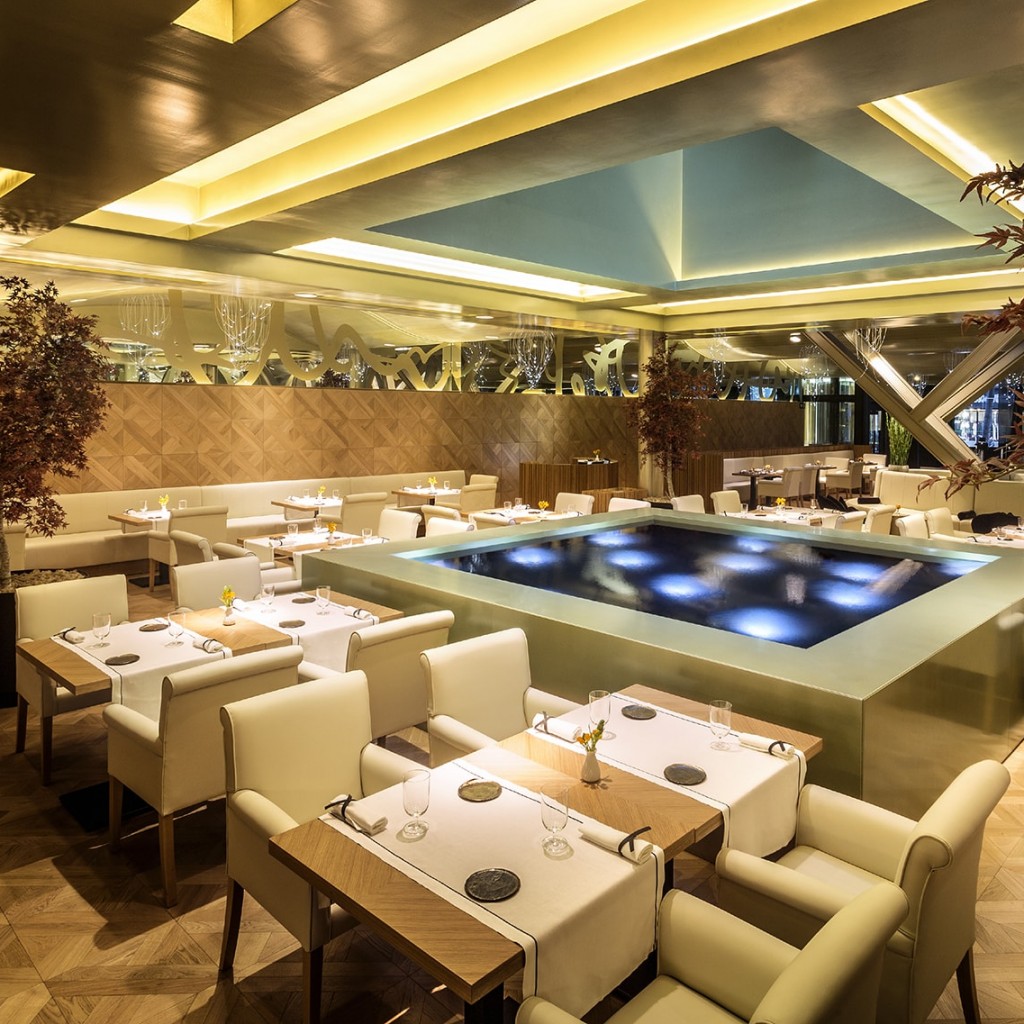 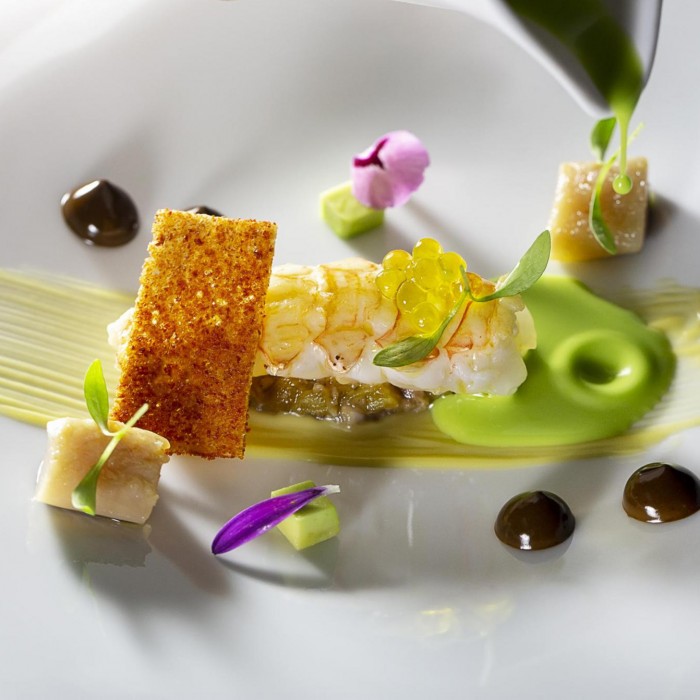 This restaurant has been awarded its second Michelin star in 2021, with Jordi Artal at the reigns. Cinc Sentits was one of the first restaurants to establish a tasting menu in Barcelona. The name translates to “five senses” in Catalan.

Featuring Catalan cuisine in its purest form from the hand of a self-taught chef who came out of marketing and made his debut in a kitchen in his own restaurant. Interestingly, the menu changes several times a year so you’ll always find a different proposal.

The restaurant is divided into three areas; the dining room, with space for 1-5 diners. The chef’s table, with seating for 6-8 diners, and finally, the private area with seating for 10-24 diners. 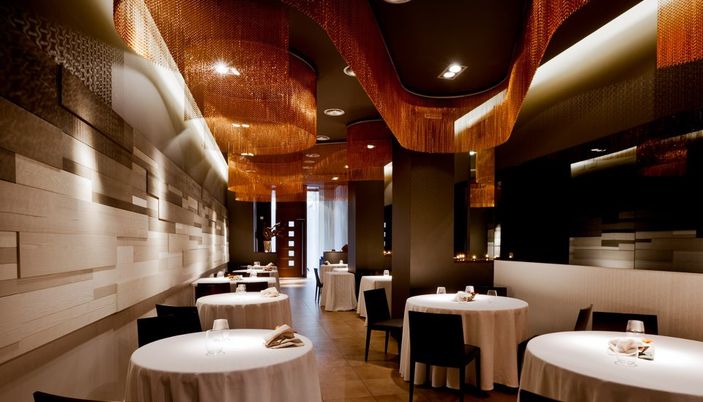 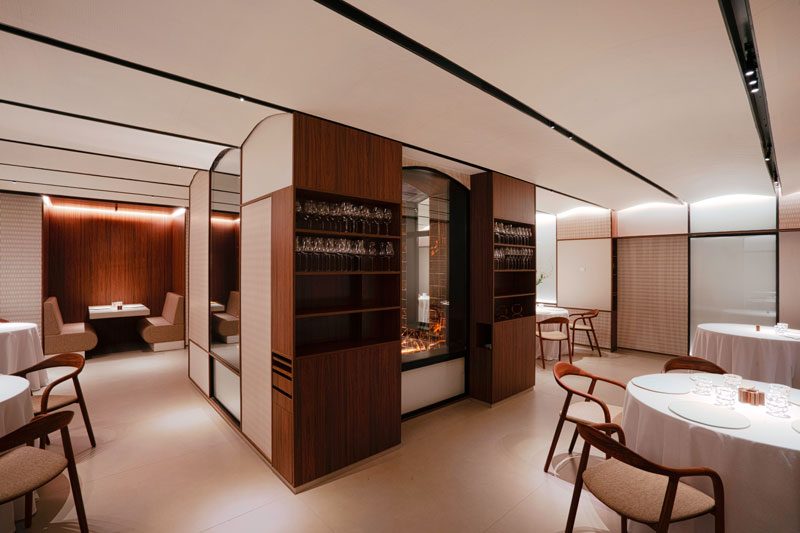 This two-Michelin-starred restaurant will immerse you in the heart and soul of contemporary Mediterranean gastronomy whilst overlooking Puerto Olimpico.

Wit the famed and prestigious chef Paco Pérez as the driving force behind this restaurant, he brings an imaginative cuisine based on the freshness of the sea and the essence of the products provided by the garden and the mountains. It is an interpretation of modern cuisine with traditional and innovative touches.

There are few chefs like Paco that succeed in bringing the flavour of the sea to haute cuisine as he does.

You can accompany your dining experience with an exquisite wine from their impressive wine cellar comprising up to 700 references. 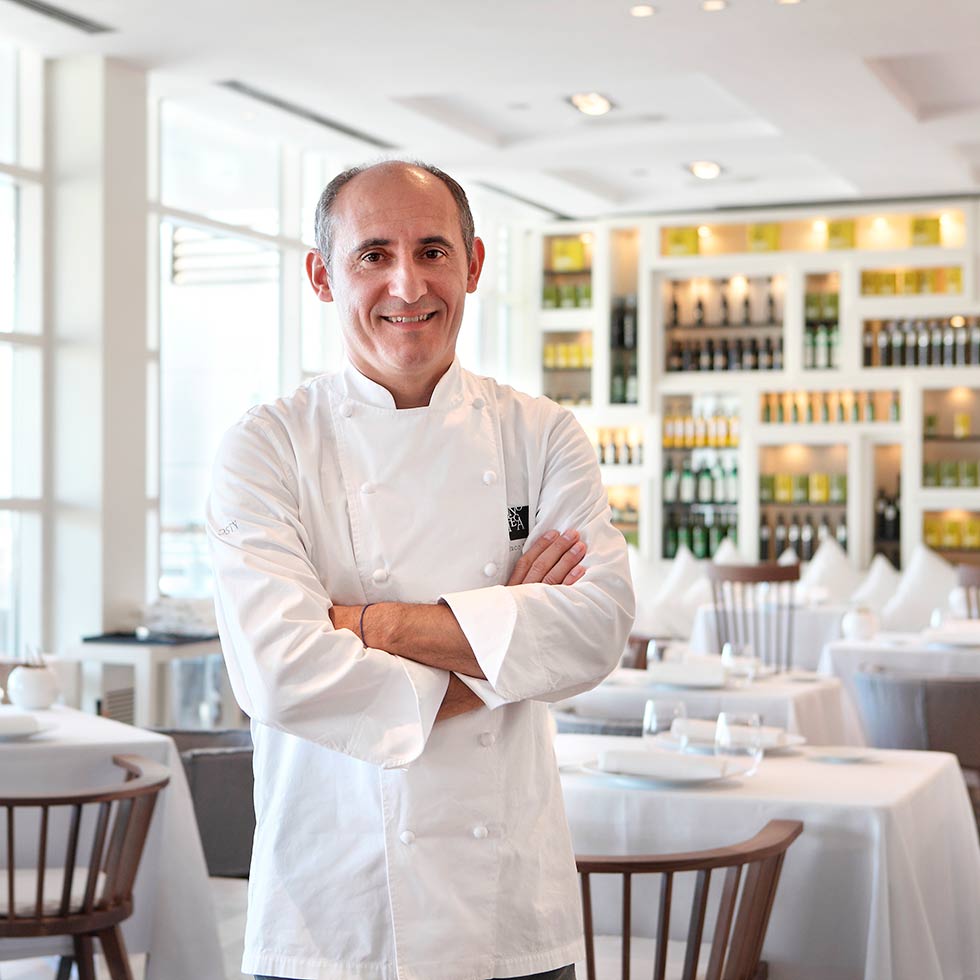 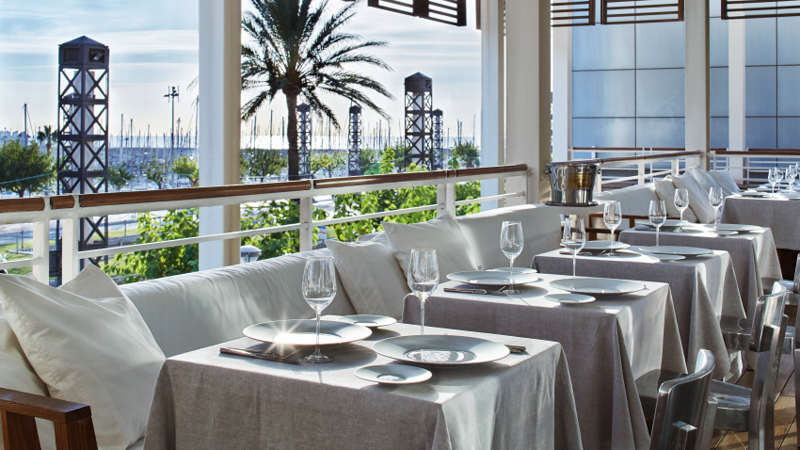 With the kitchen manned by the Torres twin brothers, they’ve elaborated a cuisine of “memories” based on family recipes and made with seasonal products from the garden and contemporary techniques.

The restaurant is found in an old industrial building in the centre of Barcelona where different kitchens are located around which diners are seated. The customer is immersed in the kitchen as the food is being prepared, with seasonal produce as the main focus of the different tasting menus. The cuisine achieved two Michelin stars in its first year of opening (2019). 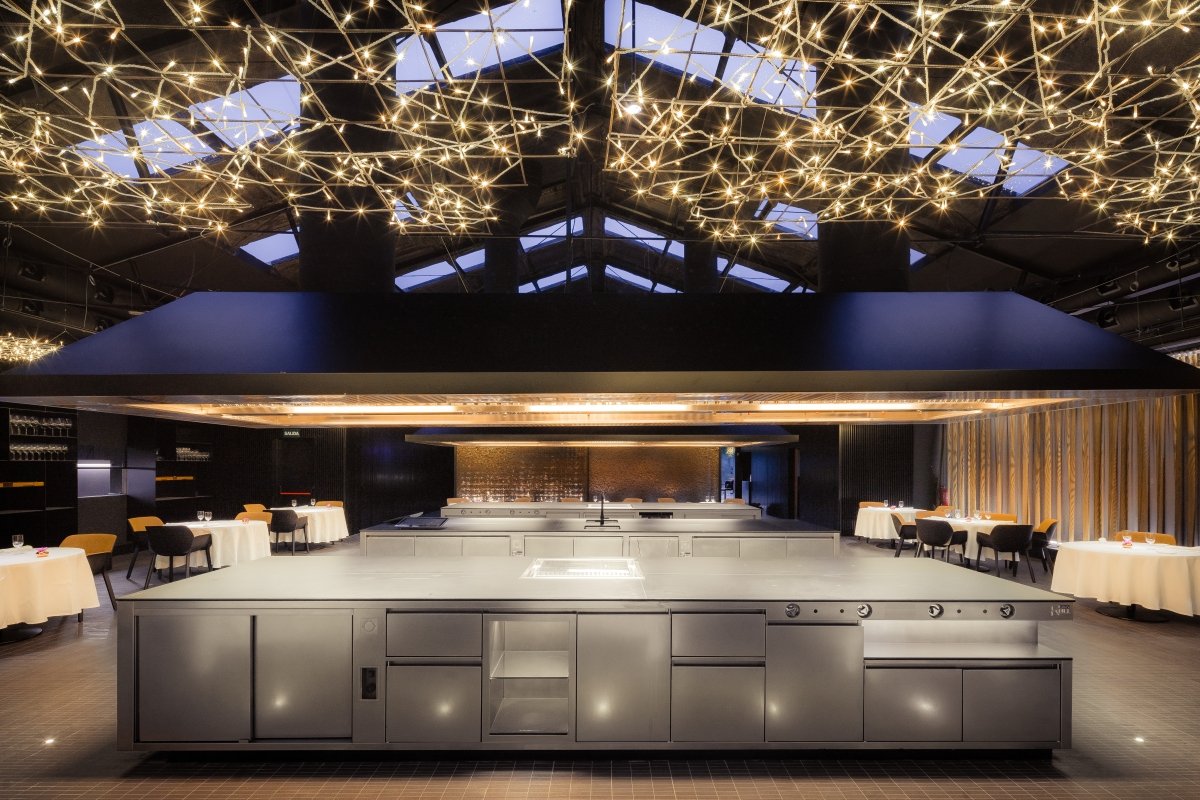 Open since December 2014, the concept of Disfrutar was born after years of intense work at elBulli restaurant, where Mateu Casañas, Oriol Castro and Eduard Xatruch began to form a team. It has two Michelin stars and has even reached number 18 on the list of The World’s 50 Best Restaurants.

Located in the Eixample, in front of the Mercat del Ninot, this restaurant is inspired by the history and heritage of the Mediterranean. The main dining room is inspired by small fishing villages, reminiscent of their other restaurant in Cadaqués called Compartir.

Their aim is to please, surprise, excite and create unique experiences through gastronomy. Every season, they usually change some of the dishes on the menu. They have 4 variants of tasting menu that you can choose according to your preferences. 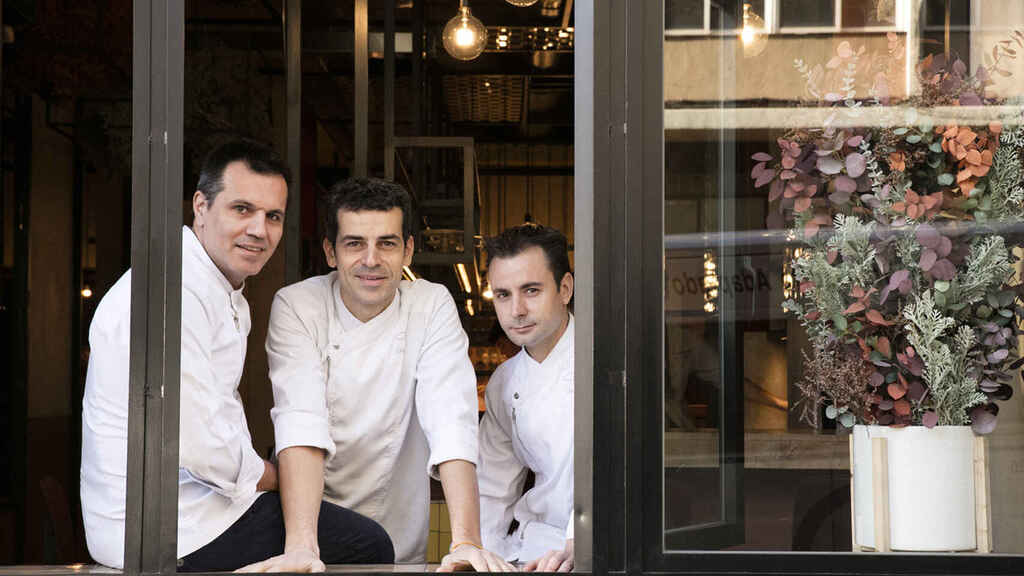 Previous articleOur Recommended Restaurants to Visit for Christmas in the Fabulous City of Benidorm
Next articleDeessa in Madrid’s Ritz: Quique Dacosta’s Most Ambitious Endeavour Yet