Over the years there have been thousands of visitors to the wonderful Mediterranean shores of the Costa Blanca. They have enjoyed all the beautiful beaches, bars, restaurants, mountains, scenic views and more, but in all that time one thing has stood out that everyone knows and recognizes: the Benidorm Palace.

The Benidorm Palace has been for years the one place you cannot miss. This is the entertainment venue that is most likely the best in Europe as over the past 41 years —30 years under the ownership of Cristina and her family— it has enjoyed a lease of life that not only has seen some of the largest and most exclusive performers entertain people there but has the credibility and recognition that has seen not only the government. Also, international organizations such as Interpol hold their meetings there, so such is its prestigious reputation.

It is most likely that anyone reading this will have not only been there, but has also gone back to this venue time and again due to its never-ending success of being able to look ahead each year and find more ways to bring in the people to its glorious arena with special shows and musicals and more to keep displaying new acts and stars. However, what everyone probably did not realize is that this venue that stands the test of time and keeps on progressing is not due to a large international organization, but to a family of British and Spanish nationals who continue to run it as their prized asset on a daily basis.

The Benidorm Palace immediately stands out when you approach it from the main road as the silver roof structure makes it look impressive before you even arrive in the car park. I recently visited the venue to meet up with the owner of the Palace, namely Cristina Climent. She is a wonderful lady born in the North of England in Widnes who as a lot have done over the past years came for a holiday in the 1970s to the Costa Blanca and never went back. 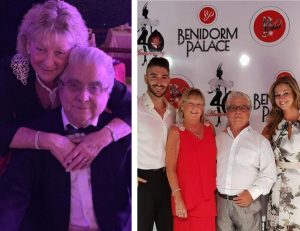 From those immediate encounters with Benidorm, which then was not the colossal size it is now, she met her to be husband, Vicente. They settled down to a life in the sun and then a desire to make hard work pay of for both of them. They started on a path of taking over a shop in one of the major hotels in Benidorm where they worked long hours and Vicente went off in the evenings to play in his band as well, such was their love of music also. From those long days they were always looking for their next venture that could see them progress forward. With children now coming along, they one evening found themselves at a local function. They were seated next to four Spanish people who started letting them know their woes and troubles as owners of what was then the venue Benidorm Palace, but not as it is today and ironically Cristina used to walk past there every day on the way to the hotel.

Due to the forward thinking and seeing an opportunity, both Cristina and Vicente expressed great interest in looking to see if they could take this Palace under their wing. After a few days of discussions, they embarked on a ten-year lease with the option to buy and took over in 1990 the Benidorm Palace.

Those days the Palace was not like it is today, as it only served drinks and cocktails and its entertainment was to say the least not bringing in the visitors. Therefore, with a bold and enthusiastic Cristina, they set about transforming the whole venue and immediately put in specialist kitchens to serve top quality food and cuisine. Then she designed a complete fit out of the interior and making it into what it is today: a 2,000 seated arena that is unique in its style and quality. 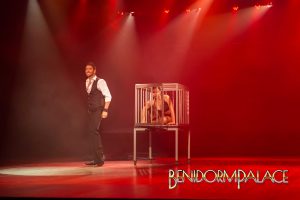 The early years were not easy as any business owner knows, but the staff quickly started to embrace the new ideas and surroundings. They started to bring in exclusive special performers and the shows with the wonderful dance troupes and singers started to then get them more noticed. People started to come from far and wide to see this new wonderful venue that allowed them to sit in comfort and be served quality cuisine whilst at the same time be entertained for hours on end with some of the best shows ever seen in Europe.

Four years into their venture they bought the place outright and following on from there the venue has gone from strength to strength. This is mainly when you speak to Cristina is due to her values and perfection and her family’s values of never sitting on your laurels and always looking at how can you improve each day. Cristina and her family love the Benidorm Palace and enjoy being there every day. As her family have grown up, her son David is now himself a trained magician and regularly performs on stage and her daughter Jo is hands on in the administration side of the business with her father, whilst Cristina and Vicente set about every year building on their passion of getting the best dancers and acts to take them even further.

The passion they have for this venue is unrelenting. I have to say that when I asked Cristina why she has not sat back in later life and let others do the work she smiles and says quite happily that it is her life and she enjoys it as much today as she did when they started.

Over the past few years the Benidorm Palace has seen some of the greatest names in the industry perform there. A lot of people would not realize that the great Julio Iglesias went on to become a star after performing at the Palace and over the past twenty years stars such as Danny La Rue have performed and today, they are still setting records on attendance. For example, Cristina and Vicente came up with putting on musicals and gala shows, and these have done exceptionally well and only recently the renowned Motown Musical broke their attendance record of selling out not only the nighttime performance, but also the matinee as well, meaning 4,000 people went through the doors of the Benidorm Palace in one day. They have also won some prestigious awards over the years as well and in 2012 they won the best cabaret theatre in Europe award. Their son David has also now been inducted into the magic circle and even won the famous Merlin Award in 2015, such is the talent in the family. 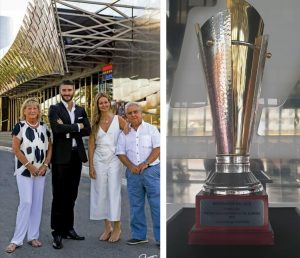 It goes without saying that the family’s dream is working not only because of them, but also due to the amazing staff they have that work extremely hard and put their heart and soul into making this venue what it is today. Some of them have been working there since Cristina and Vicente took over the venue on day one and they also love coming in each day.

We all know that Benidorm is a place where people think of bars and inclusive hotels and all that this resort brings, plus of course the TV programme, but whilst all this exists it is impossible to not know of the Benidorm Palace as it is renowned all over the world. Today we can say, despite all the problems and economic downturns in the world, this place has stood the test of time and that is due to the incredible and lovely lady Cristina Climent, her family and staff who when I left were then setting out the next gig and not relaxing one bit! And when I asked her why she does not retire and lie in the sun now, she just smiled and said: ‘Never! This is what I do’. With the attention to detail and the overall performance that she and her family put into this it is no wonder this venue is most probably the best in Europe. 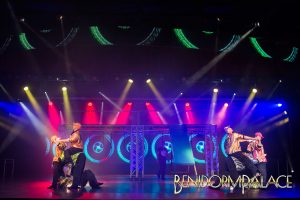 So there you go the story of a lady from Widnes who at only eighteen years of age went to Spain for a holiday and never went back. She has not only done well but she is an inspiration to us all in business. If you were not aware that the Benidorm Palace was owned by a great family like this then maybe your next venture could be just around the corner as the Costa Blanca has many opportunities and this lady has shown you can dream and succeed.