We are breaking the planet. Climate change is a fact. We are about to reach a point of no return. That’s why we have to act now and protect the environment. Therefore, initiatives such as the Neteja Submarina i Litoral de Benisa are so important. Now you can help conserve the seabed and coastline of this city on September 29.

The Neteja Submarina i Litoral or Underwater and Coastal Cleaning of Benisa is a consolidated event that this year celebrates its 18th edition. This solidarity ceremony is organised by the Benisa Town Hall and the Les Bassetes Diving Club, and they expect to have a large number of participants in order to collect marine litter. More than 80% of this waste is made up of plastics, which take about 400 years to disappear. According to the European Commission, there are more than 150 million tons of waste in the sea because of the neglect and selfishness of human beings. As a consequence of this, we are putting marine flora and fauna at risk, and we have caused the extinction of many species.

The XVIII Neteja Submarina i Litoral of Benisa is part of the Blue Flag Program (“Programa Bandera Azul”). Through this initiative they try to make people aware of the importance of the care of the aquatic environment by all users, since this task falls to everyone, not just the inhabitants of the coastal towns. 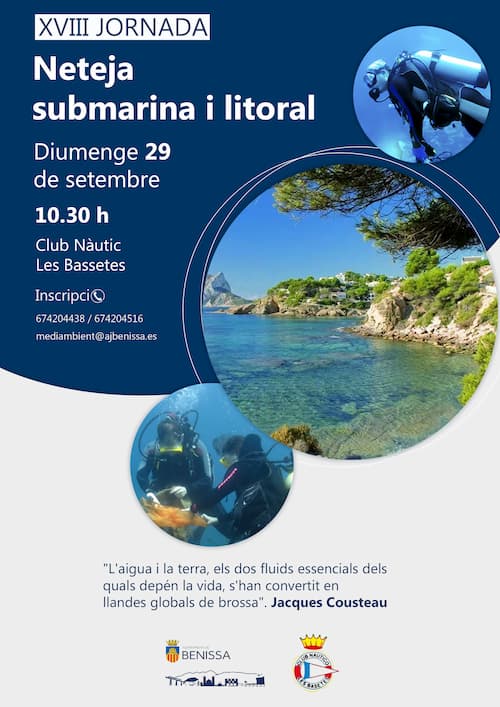 Be part of this cleaning team

This solidarity activity will take place on Sunday, September 29 at 10:30. Participants will meet at the Les Bassetes Diving Club. The underwater and coastal cleaning event will end at 13:30 with an appetiser. If you want to be part of the underwater cleaning team, you can register by calling +34 674 204 438 and +34 674 204 516 or writing an email to mediambient@ajbenissa.es. You can find more information on the website of the Benisa Town Hall

The environment needs you. Are you going to turn your back on it? All life comes from water. Let’s return nature to what is hers.

Previous articleThis summer ends with storms
Next articlePic d’Or Restaurant: From the sea to the table