With ventures in  Bizkaia, London, Tokyo, Lisboa, Seville y Brussels, Eneko Atxa has achieved an impressive five stars from the prestigious culinary guide over his career. 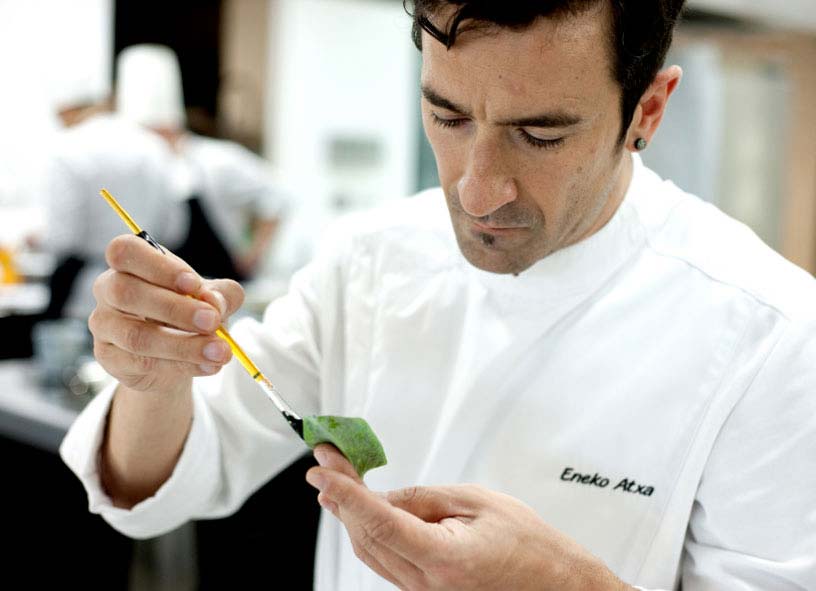 Eneko Atxa is renowned around the world for his cuisine, but he’ll never forget his roots. His gastronomy is an ode to the pleasure of identity, to food from home, and to his origins. We invite you to explore his history and discover the man behind the apron.

After studying at the Leioa Catering School, Eneko Atxa soon began to stand out for his undeniable culinary talent, forging his professional career in the kitchens of great restaurants such as Martín Berasategui, Mugaritz, and Etxebarri.

14 years ago, Eneko and his uncle opened a txakoli winery with a small dining room. Known today as Azurmendi, in the Biscayan town of Larrabetzu, boasts three Michelin stars, occupies 16th place in the list of the 50 best restaurants in the world. Eneko achieved this amazing feat.

and has been distinguished as the most sustainable restaurant on the planet. Along the way, he forgot to laugh, but now he claims to have recovered his laughter. In 2016 he received the Fuera de Serie Award in the Gastronomy Category and in 2017 he revalidated his three stars at the 2018 Michelin Guide gala and unveiled a new star for his restaurant Eneko.

In 2005 at the mere age of just 28, he opened the Azurmendi restaurant, where he achieved dazzling success based on five main pillars: work, knowledge, customer, territory, and sustainability.

His cuisine perfectly combines technique, aesthetics, and flavour, with a clear commitment to local produce, the restaurant’s vegetable garden, and of course, Basque roots. 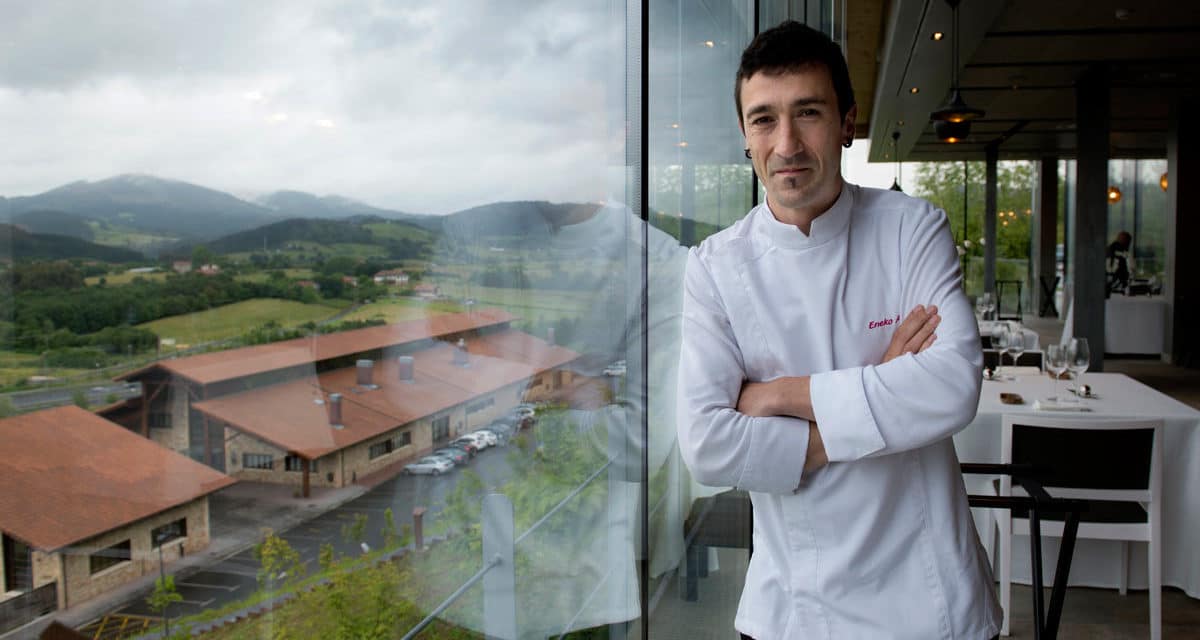 Eneko was born in the town of Amorebieta, where many around the Basque Country saw him train as a chef in various kitchens. Trained at the Leioa Catering School, Eneko developed as a professional alongside chefs such as Martín Berasategui and Andoni Luis Aduriz, and also worked in the kitchens of famous restaurants such as Andra Mari in Galdakao and Etxebarri in Axpe.

He’s the mastermind behind Azurmendi, one of the 11 Spanish restaurants with three Michelin stars. However, they are not the only ones he holds: the recent opening of Eneko’s restaurant in Bilbao has given him a new shine to add to the one already held by Eneko Larrabetzu, his home in this Basque town.

Eneko describes the cuisine at Azurmendi as a “journey through time”. Elaborated with family recipes, from the love of tradition, craftsmanship, and the contemporary, to bring pleasure to the palette.

The young chef chose that name because it was his mother’s surname. Everything stays at home. For its location, he chose a hillside surrounded by vineyards, an enclave that makes the gastronomic and sensory experience even more special.

Azurmendi is one of the 11 Spanish restaurants with three Michelin stars. However, they are not the only ones he holds: the recent opening of Eneko’s restaurant in Bilbao has given him a new shine to add to the one already held by Eneko Larrabetzu, his home in this Basque town. 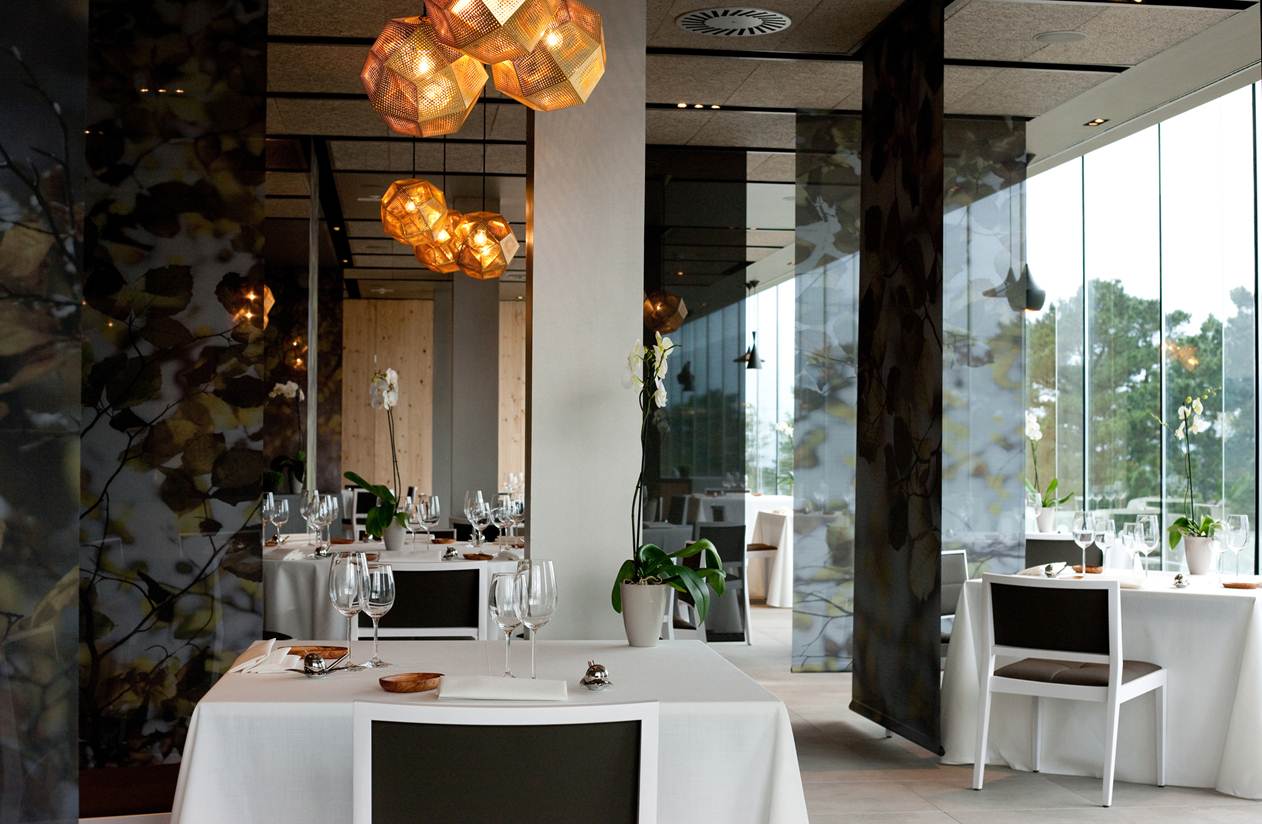 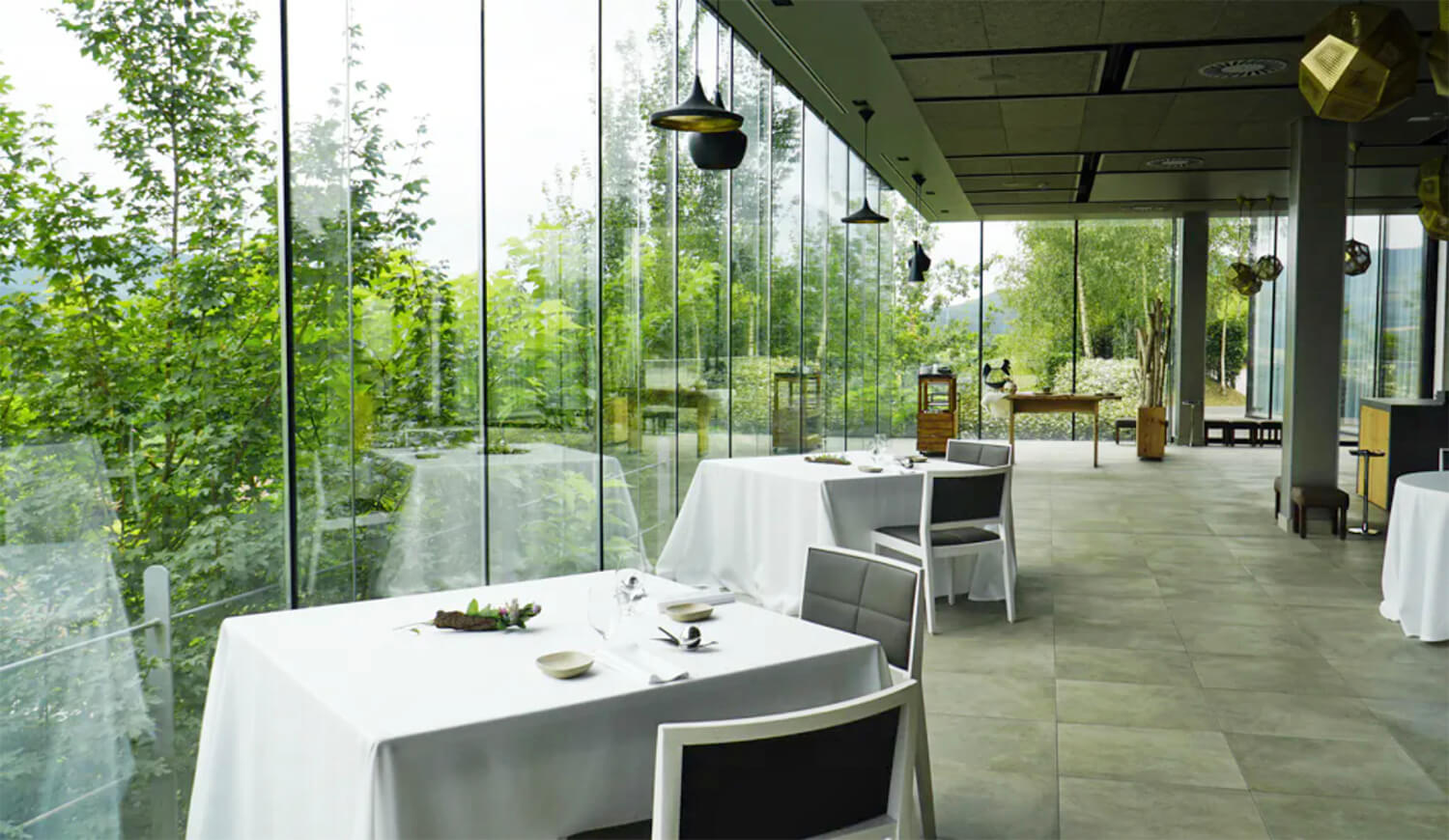 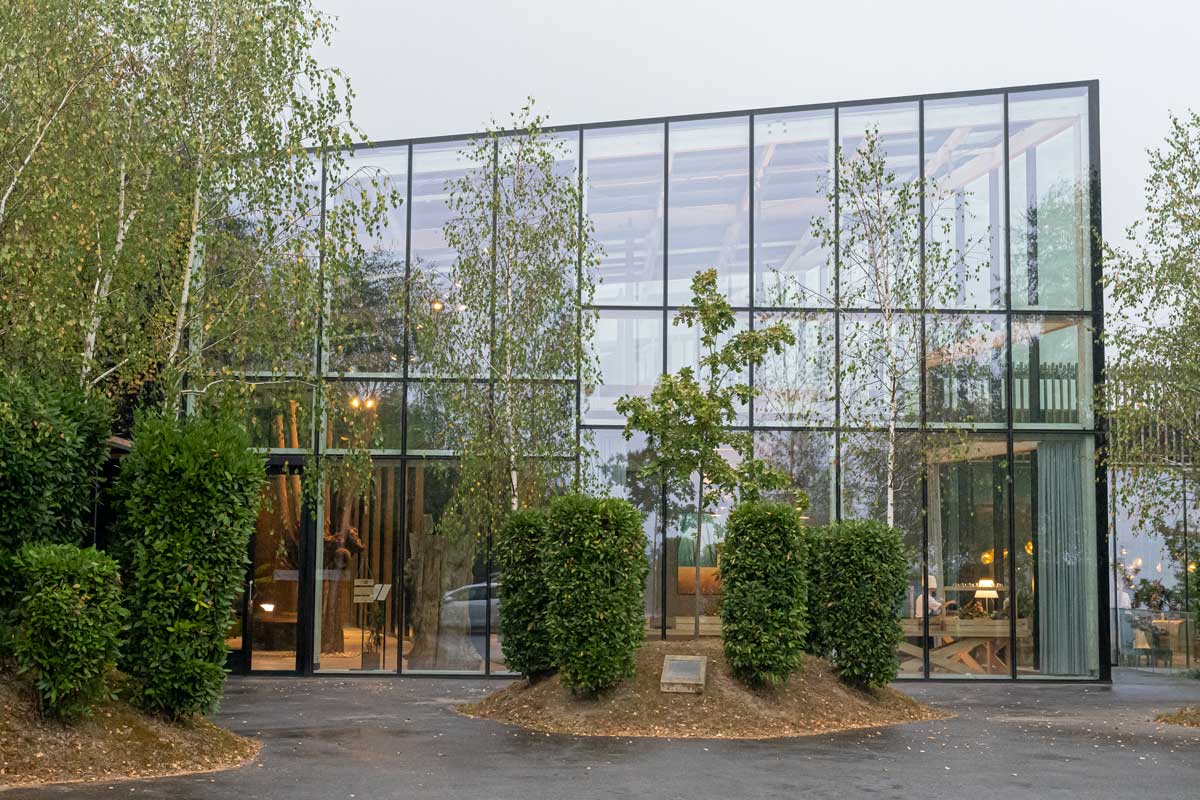 Chef Eneko Atxa returns to his origins with the Sutan menu. An open menu with dishes designed to be cooked in front of the diner. Full of flavour, technique, and tradition, prepared with local produce.

Azurmendi was born in this building, located on the outskirts of Larrabetzu, in 2005. After winning its first 2 stars in 2012, it moved to the top of the hill, where a sustainable building was built to house it. Now, in his ‘first home’, the chef has wanted to return to his origins, to talk about his land, his culture and traditions, Basque producers, and his work. This is the ENEKO restaurant, which already has a Michelin star.

For the chef, seeing the diner’s face while cooking is a responsibility that he demands and carries to perfection. This is why at ENEKO in Larrabetzu, the team prepares the food in front of the customers, to fully immerse them in the dining experience.

The ENEKO restaurant is located above the Gorka Izagirre winery, where guided tours are given in Spanish, Basque, or English. Diners can visit the winery and taste two txakolis before eating at the ENEKO restaurant for a complete food and wine experience. 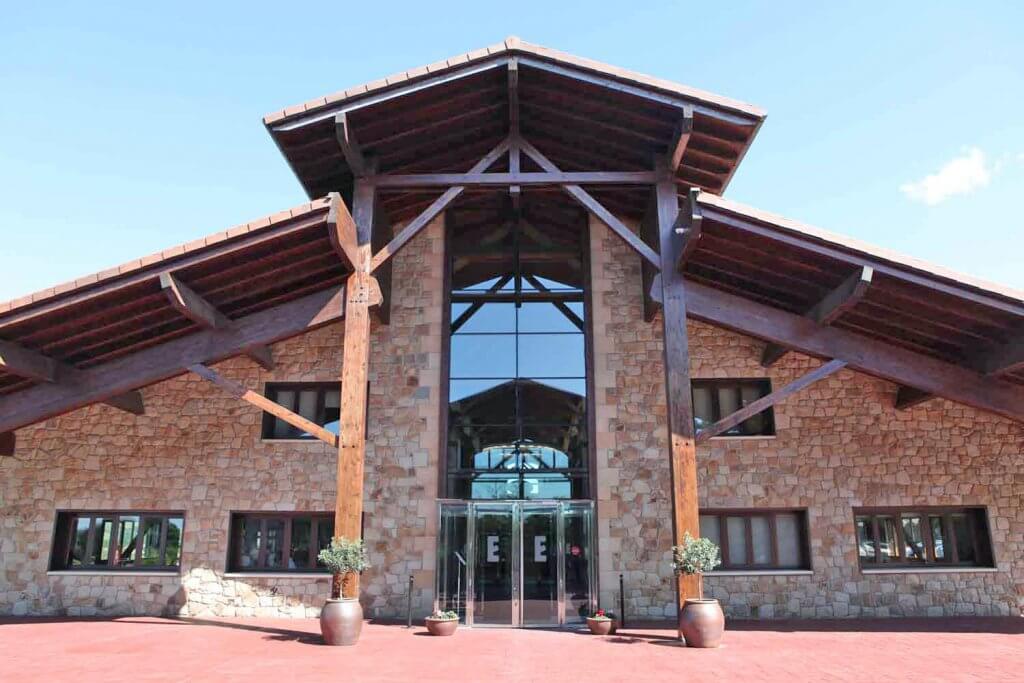 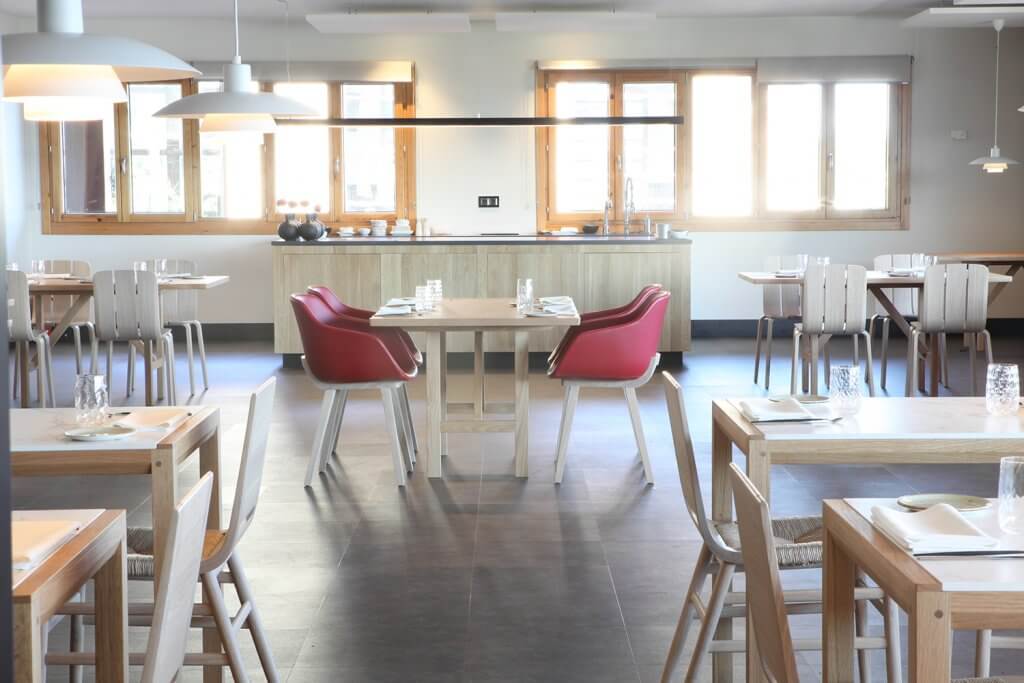 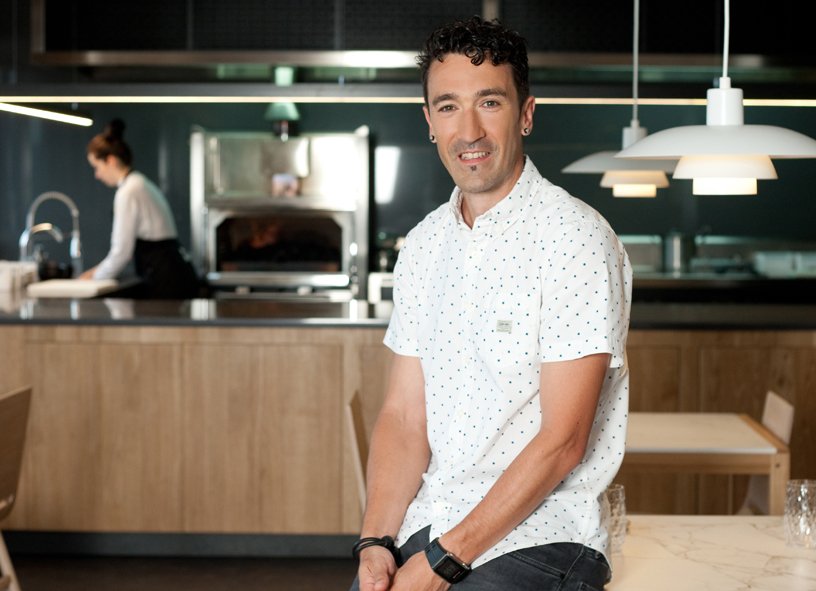 Previous articlePalau de la Música: Where Music and Culture Come to Life in Barcelona
Next articleThe Olive Tree: Where to Enjoy Fine Dining with a Modern Twist