The tourist capital of Costa Blanca and the Valencian Community is much more than skyscrapers and beaches, as there are interesting places to see in and around Benidorm. 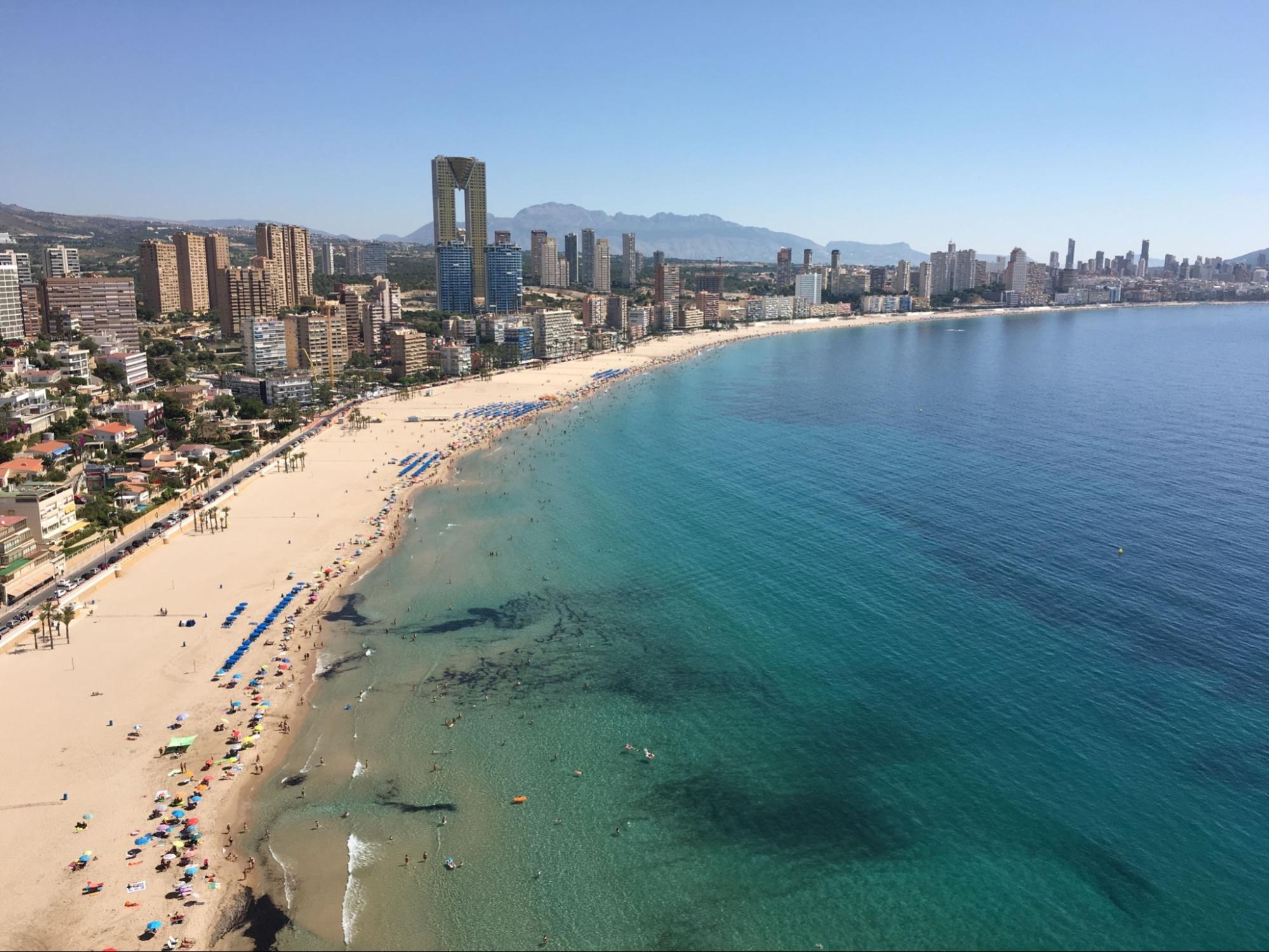 Before Benidorm became the little British hub of Spain that it is today, it was a coastal town with a fishing tradition, and in the old town, we can find the last remnants of the history of the beloved city. The old town is situated right in the centre of Benidorm, bounded by the Parque de Elche and the Plaza Triangular.

In order to make it easier for tourists to visit the streets of Benidorm, the Town Hall has established four zones. You will find directional information panels at the main entrances to the city, as well as in the areas most frequented by visitors.

The area that can be considered the old town is the intersection of Avenida de Ruzafa with Avenida Emilio Ortuño – Plaza del Castillo (Punta el Canfali), Puerto and Parque de Elche, which are small streets and generally pedestrianised, giving a feeling of overcrowding. It’s undoubtedly one of the most attractive areas as far as tourist elements are concerned 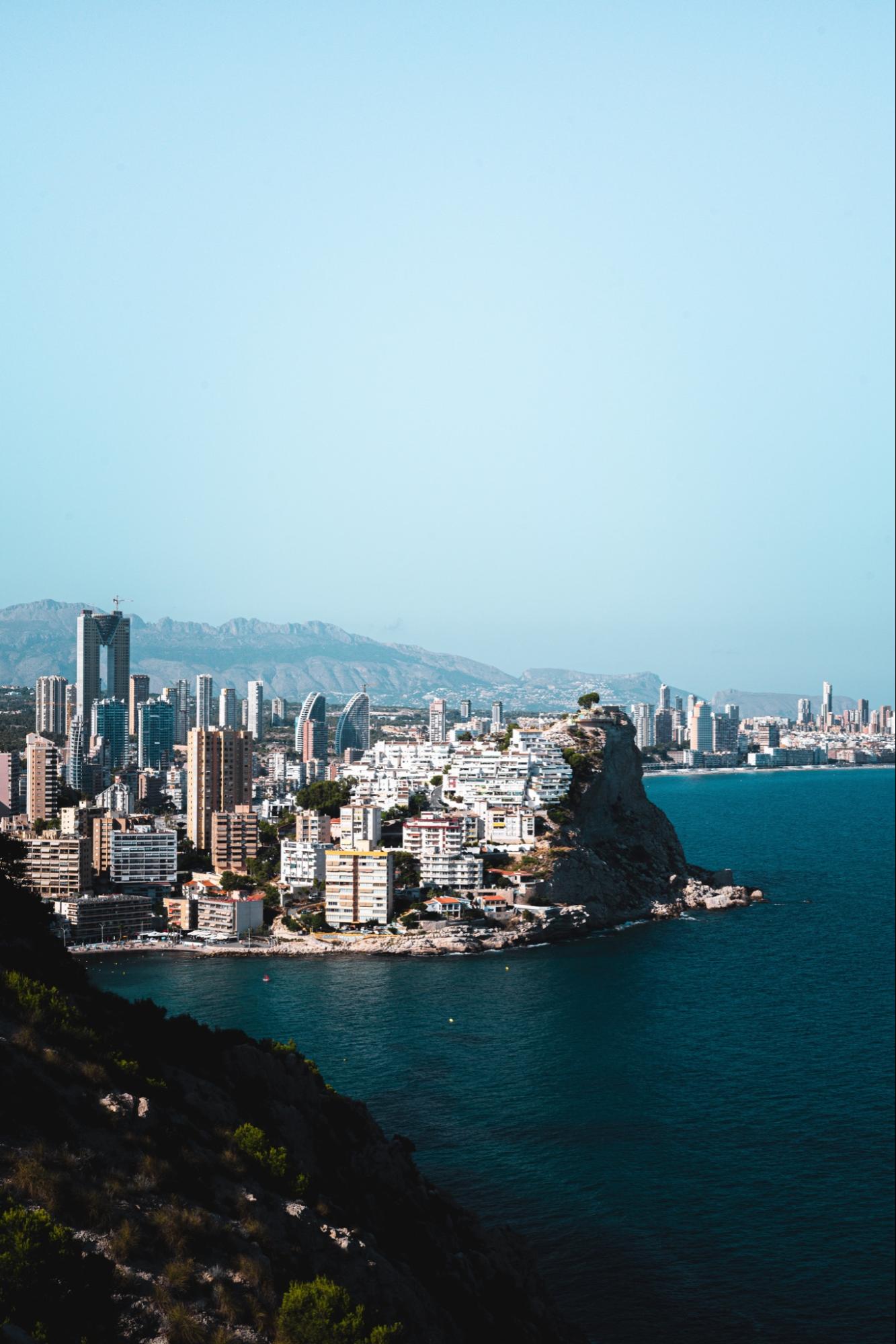 Benidorm attracts not only those who prefer to spend their vacations on the beach but also many enthusiasts of fascinating excursions. On its territory, many historical monuments are well preserved, and there are several interesting museums and galleries.

One of the most famous attractions of Benidorm is the beautiful Gran Hotel Bali, the tallest hotel in Europe, which is a true example of contemporary architecture. The building rises up to 186 meters, the construction of this skyscraper was completed in 2002. The observation deck on the top floor of the skyscraper is open to all visitors who can enjoy a bird’s eye view of the city.

During a walk through the city, you can see many tall buildings, which is why Benidorm is often referred to as “Spain’s Manhattan”. 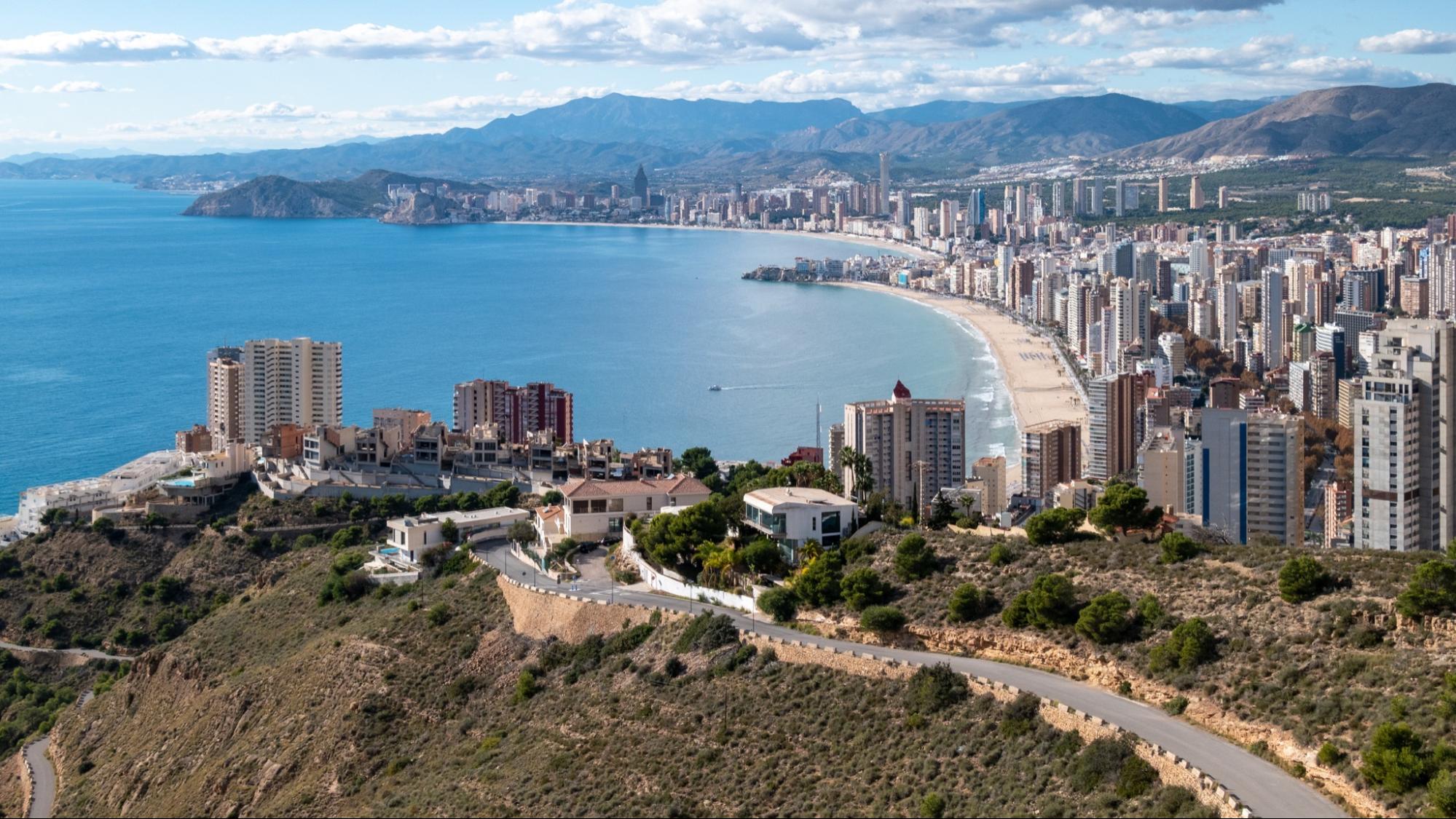 Benidorm is one of those special cities that offers tourists entertainment for children of all tastes. The city has also natural attractions, among which we should mention the mountain Puig Campana.

Compared to it, all of Benidorm’s skyscrapers can begin to look small. In the picturesque pre-mountainous areas there are many walking routes that pass through the most attractive places.

The names of many historic avenues and streets speak for themselves: Avenida de Uruguay, Calle Pekin, Avenida del Mediterraneo. Each street is lined with historic buildings, quaint restaurants and stores. Walking along the Calle de Los Gatos, you can reach the beautiful old castle, which is considered to be the conventional border between the old town and the new part of the city. 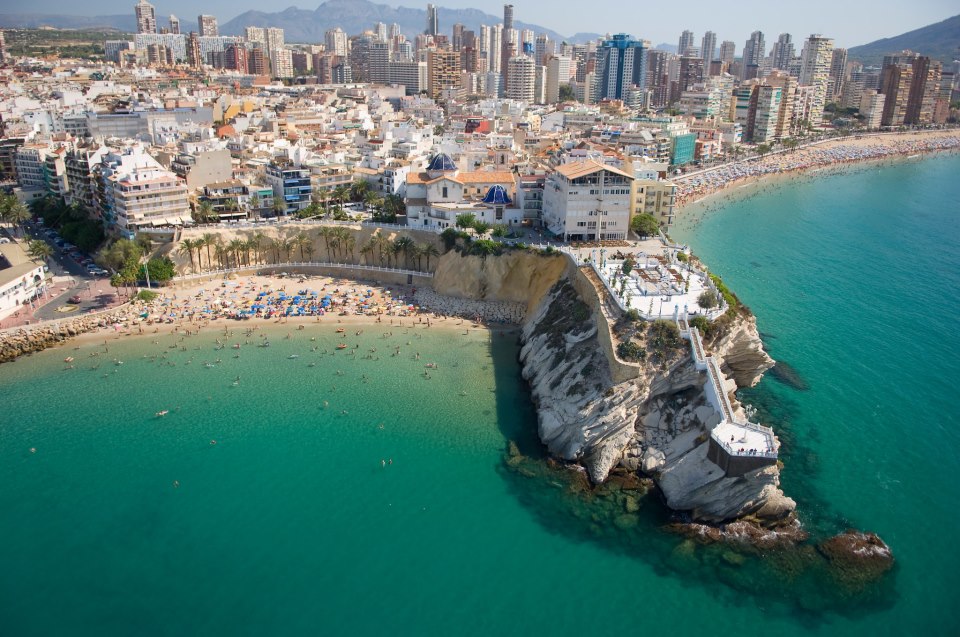 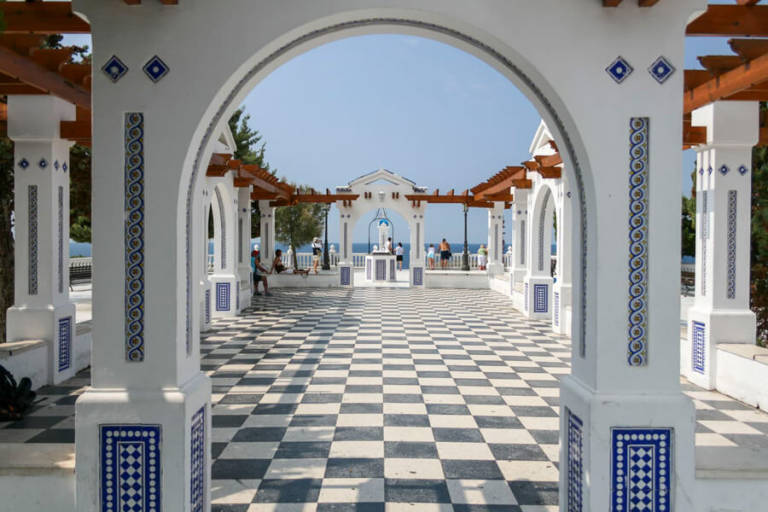 Before it became the important tourist centre that it is today full of skyscrapers and leisure facilities, Benidorm was a small, typically Mediterranean fishing village. That’s why in the old town we can still enjoy that style in its streets and emblematic buildings. The old town of Benidorm is situated between the Plaza Triangular and the Parque de Elche.

The old town of Benidorm is an ideal place to get in touch with the most deeply rooted traditions of this city. Among its houses, which still remind us of the fishing origins of the town, we can find some emblematic buildings, most of them dating from the mid-20th century as points of tourist interest.

Thus, for example, we can find the Parque de Elche at one end. This park is also known as the park of pigeons. You can imagine why this park is usually full of flocks of pigeons that are usually under the shelter of the fountain. In this park, we can find numerous benches and swings as well as walking areas, and we can stroll in the shade of palm trees.

We can also find the church of San Jaime and Santa Ana, the most important church in the city, where we can find the image of the patron saint of the city: the Virgen del Sufragio. This church dates back to the 18th century and is located next to the Plaza del Castillo.

Many of the typical events of the city’s Fiestas Patronales take place next to this church because the image of the patron saint of Benidorm is located there. It stands out for its large blue dome typical of Mediterranean architecture.

Benidorm is also home to excellent health services. HCB is a family healthcare group that has come a long way and has always sought excellence in healthcare services. Thanks to the quality of its services and care, they continue to be a well-respected and establish healthcare clinic today.

The history of HCB began in 1986 when the Paz Figueroa family realized that there was no healthcare centre in Benidorm that could meet the health needs of that time. Tourist expansion brought many travellers to the area and there was no centre specifically trained to treat foreign patients.

It was then that the idea of creating a multidisciplinary team focused on treating patients from different parts of the world was born. It was from this idea that the current HCB model for foreign patients was forged.

The success of this model was such that it quickly expanded throughout Costa Blanca and the creation of the network of external medical centres to HCB Benidorm began, these being HCB Albir, HCB Moraira and HCB Calpe. 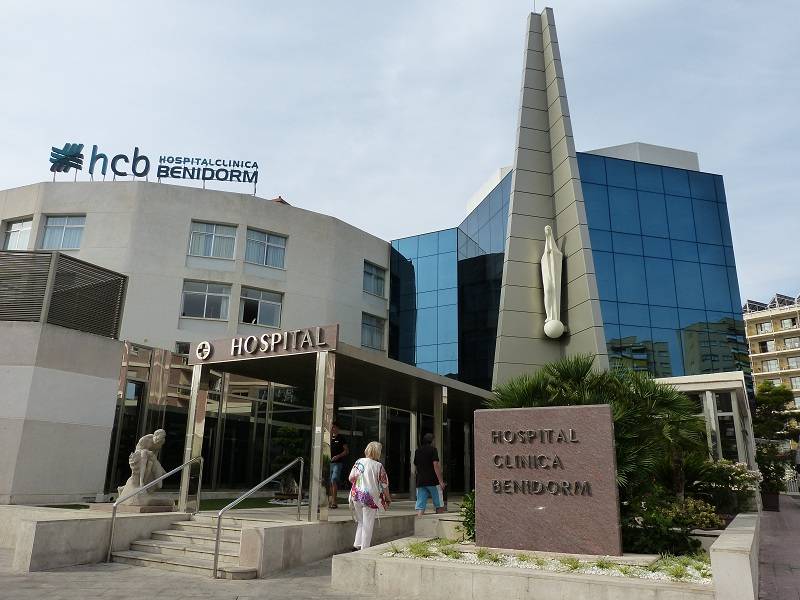 Where to Eat in Benidorm

The story of the ConBrassa Group is tied up with the history of Benidorm itself. Licinio García Alcázar moved from Albacete to Benidorm to build this famed group of restaurants and gastro-bars, drawing from the 30 years of experience under his belt in the restaurant industry.

He now manages six successful restaurants that are ranked amongst the finest establishments for high-quality cuisine, signature cocktails, and exceptional service in Benidorm.

Focusing on using the best seasonal products on the market, “El Barranco” was the origin of the Conbrassa gastronomy philosophy. It was the first restaurant of the saga located in a privileged setting in the cove of Benidorm in 1989.

Each of them has been executed with the utmost precision and each with its own style, personality in different locations, but always with one thing in common: to involve the client in an unforgettable experience.

With all six restaurants, you’ll be spoiled for choice from traditional Mediterranean cuisine, to gourmet pizza, to delicious grilled meats, to a superb Paella. 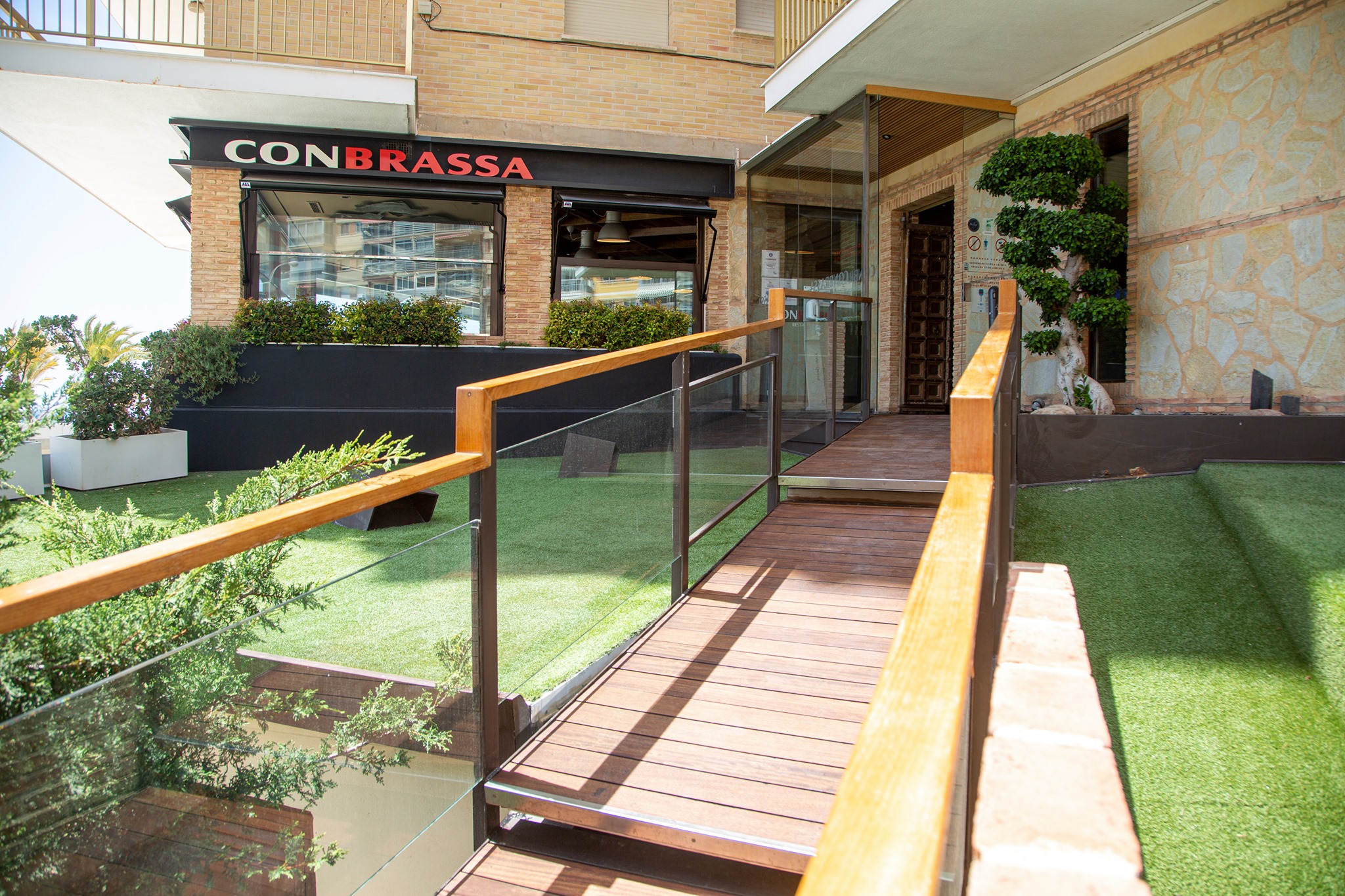 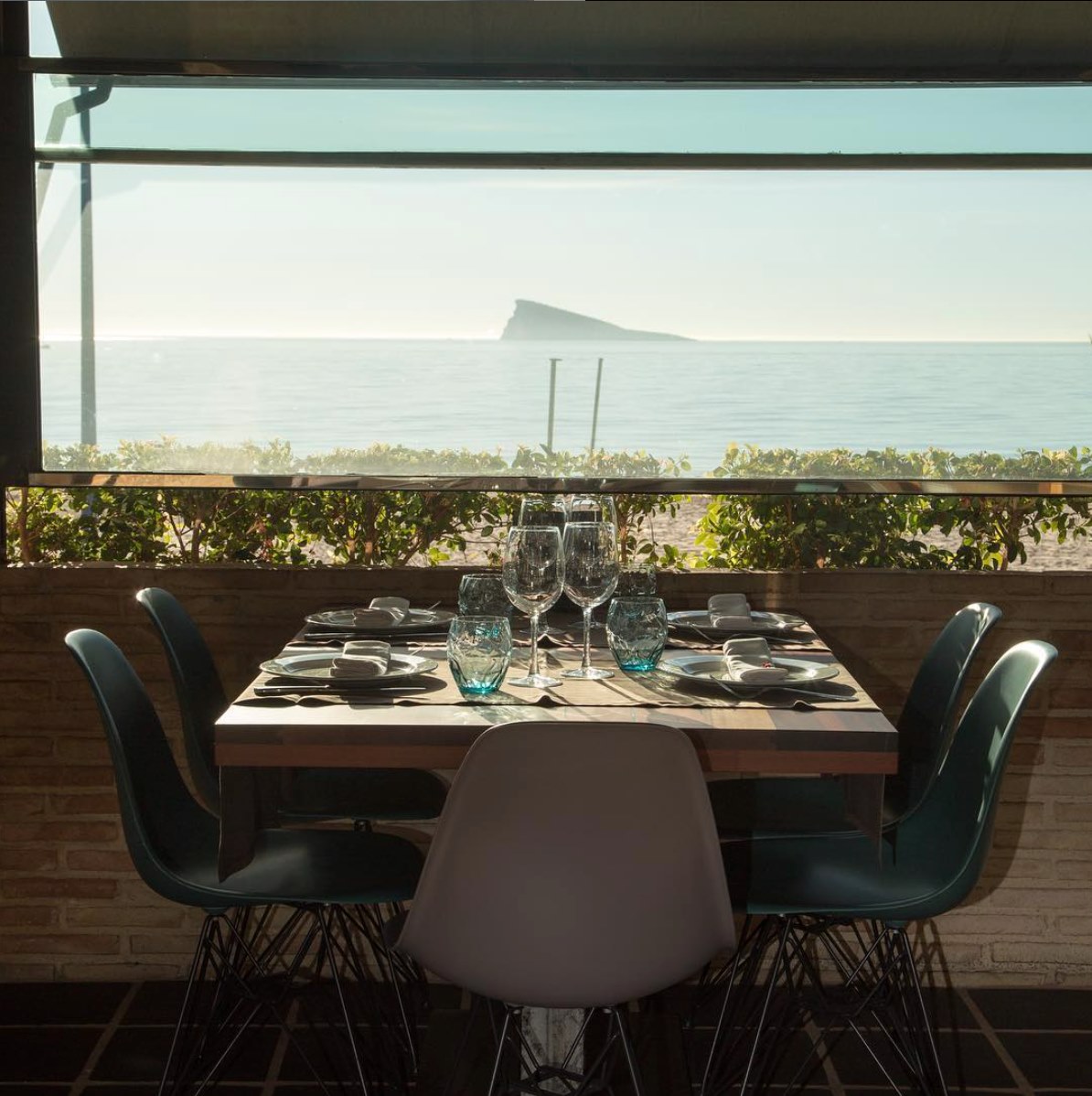 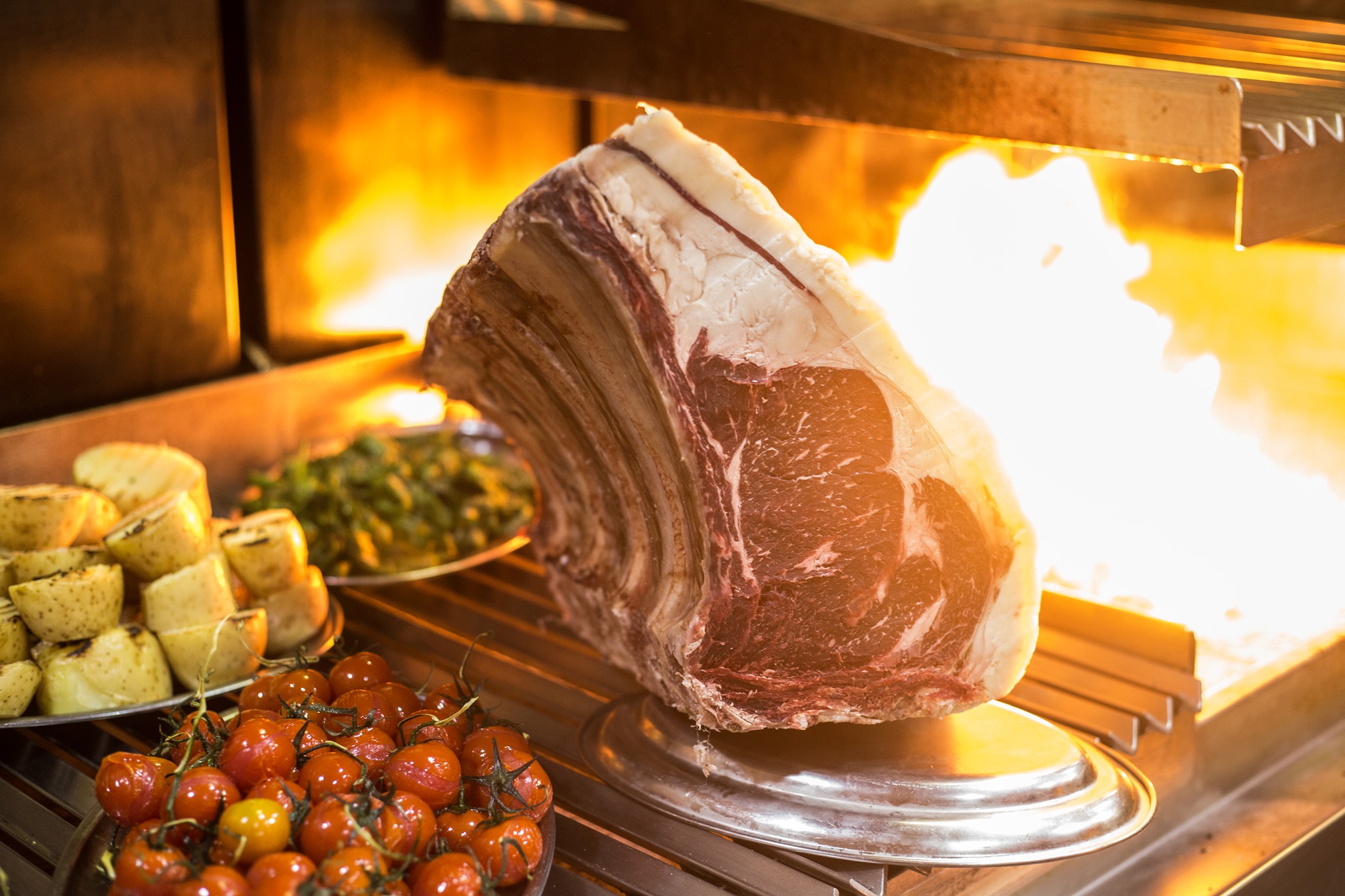 La Falúa has been an established avant-garde and modern restaurant since 2007, where highly-experienced staff works closely to provide attentive service. Like a well-oiled machine, they make the satisfaction of all their customers their top priority.

Manning the kitchen is distinguished chef Maria Teresa Carrasco, who beckons on the customers to discover a new world of sensations and flavours.

At Falúa, your palate will be overwhelmed by the innovative culinary creations combined with the more traditional Spanish recipes. Find the menu here where they offer a wonderful array of salads, grilled meats, and tantalizing dessert choices.

The restaurant is located in Benidorm near the Poniente beach, with a tasteful decoration mixing classic and modern elements very successfully. They elaborate a refined cuisine, well elaborated in Mediterranean style with author touches.

Expect delicious paellas and rice dishes, soups, fish and seafood typical of the land, in its menu we can find, Warm Salad of Prawns and Duck Ham with Nuts and Raisins, Homemade Croquettes of Iberian Ham, Sirloin Carpaccio with Mustard Vinaigrette, Grilled Sirloin with Sauce, and many more! 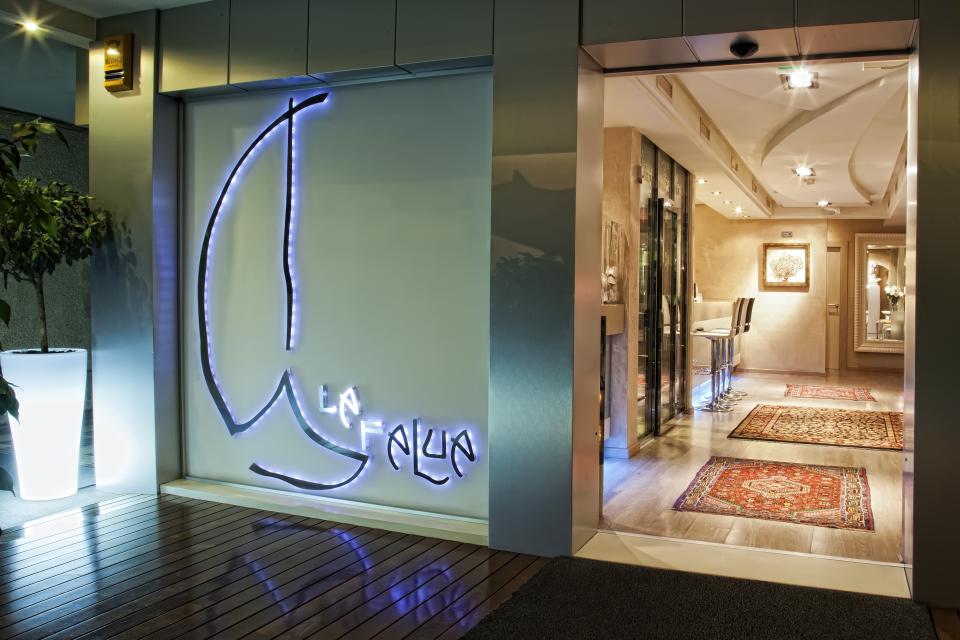 Dinner and a Show at Benidorm Palace

With its extravagant shows and fine dining experience, this palace offers the glitz and glamour of Las Vegas with the exotic flair of Bollywood.

Expect acrobatics and extravagant dance routines are some of the nightly shows you can enjoy at the Benidorm Palace. Dinner is served at the candlelit tables that fill the majestic auditorium, while exciting dances and rhythms light up the stage. Enjoy the wide variety of musical styles in this electrifying forum.

Since the palace opened in 1977, many famous people have performed on this stage. Talk to the staff to learn the stories of some iconic performances, including Gloria Gaynor, Louis Armstrong, UB40 and The Platters. Learn about the incredible tributes to some classic stars, such as Elvis and Queen. The auditorium has 1,660 seats divided into three floors. This forum has been used as a stage for the popular British comedy series Benidorm.

The main shows take place on Tuesday, Thursday, Friday and Saturday evenings, while the box office is open Monday through Saturday, from morning to evening. Choose from different types of tickets, which can include the show, food and drinks.

The menu includes delicious desserts and bottles of wine. Children’s meal options are also available. Bring your partner to the dance floor to join in the fun. 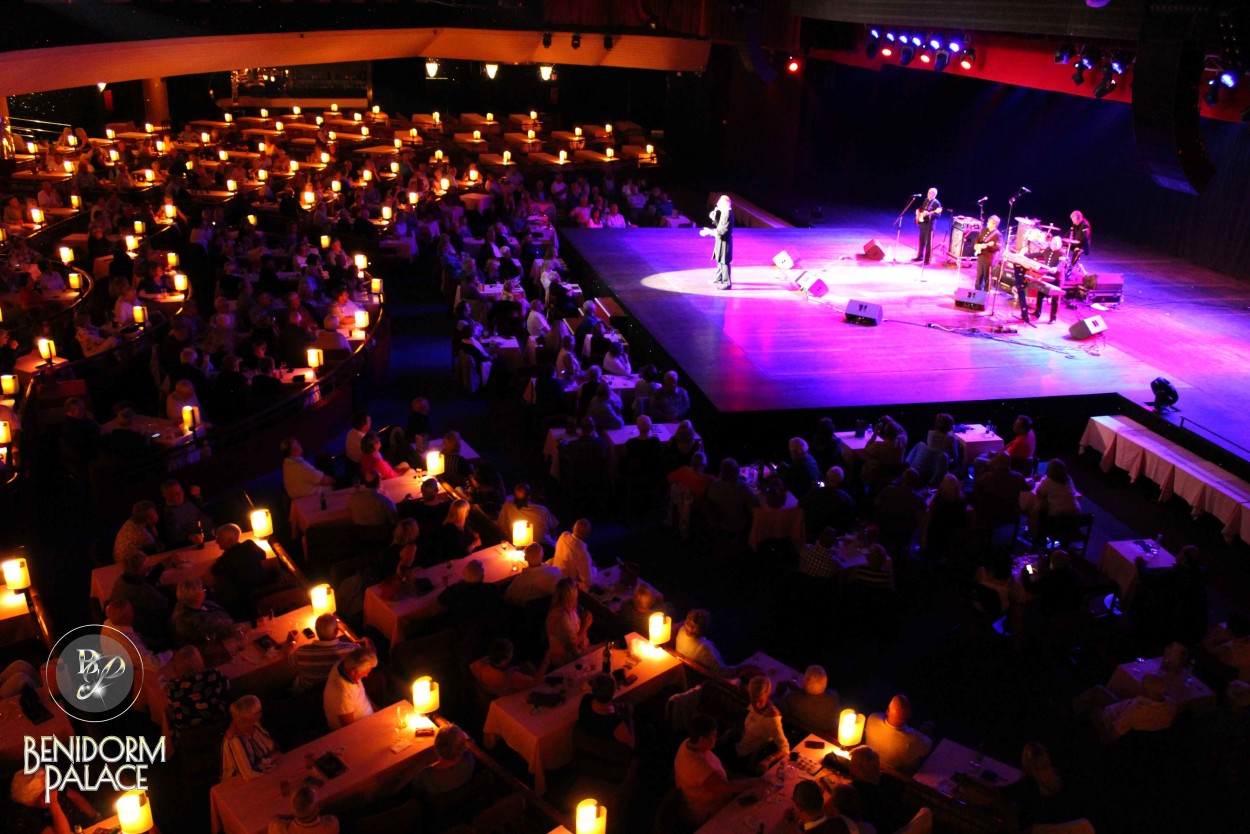 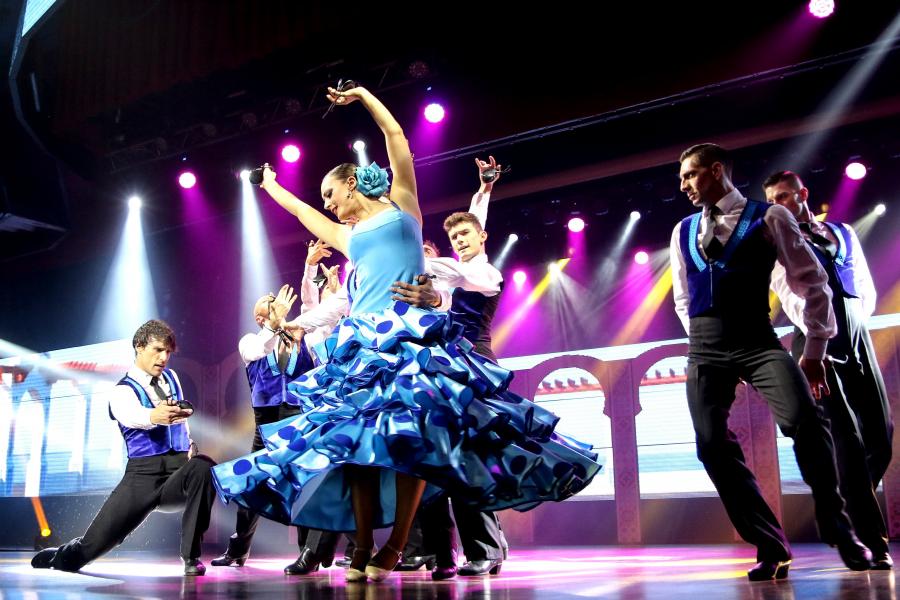 Previous articleElian’s School: Join Their Forthcoming Open Days And Explore Their Nurturing Environment
Next articleBonAmb Kicks off the New Culinary Season with “L’Encesa”