Toledo: What to See and Do in One Day at this Mediaeval Delight

If you find yourself in Madrid and have a day of your trip to spare, then you have to dash out to the Mediaeval city of Toledo. 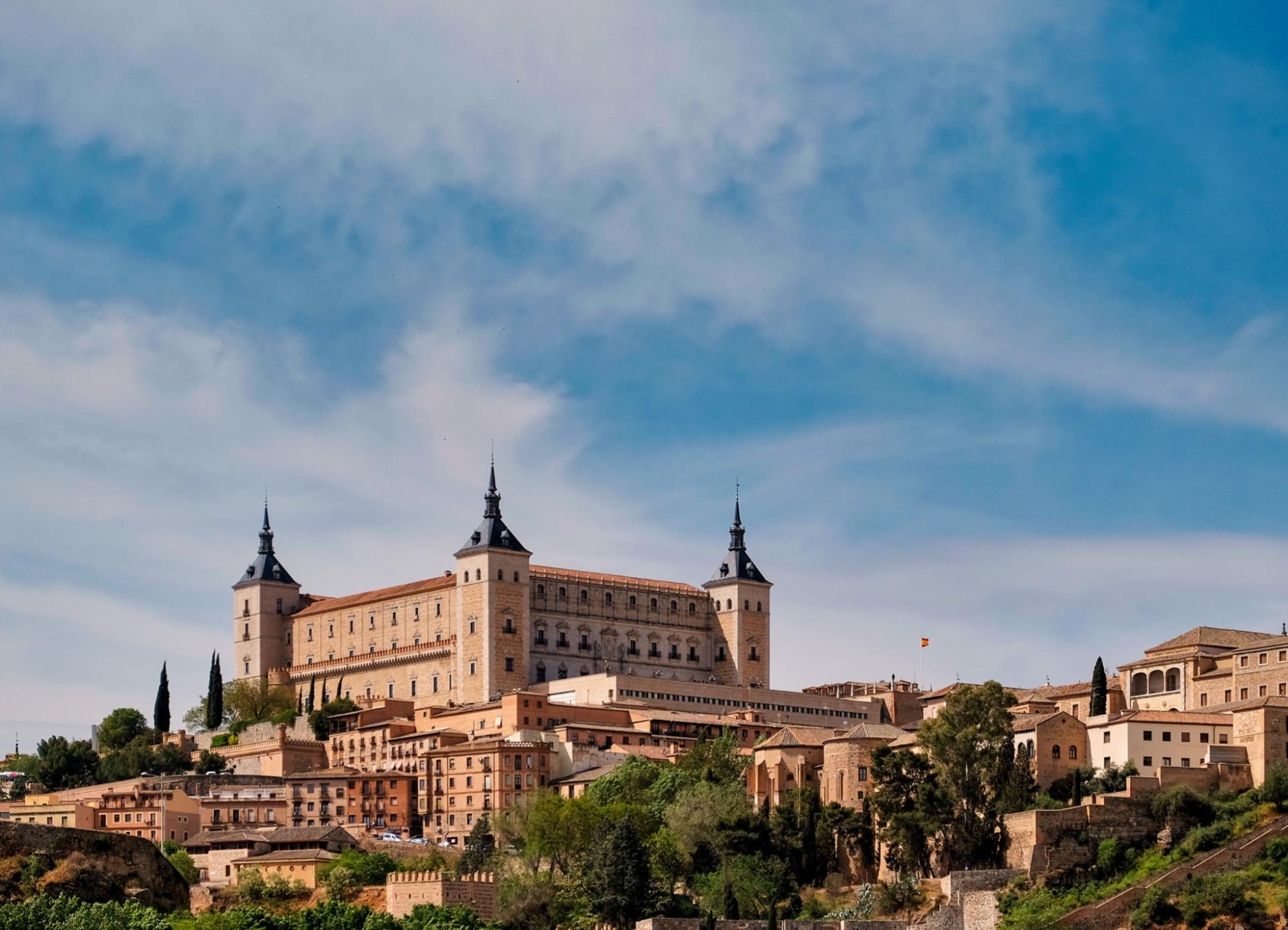 Toledo is a city with a long history dating back to Roman times and is now known as the City of Three Cultures, as it is home to monuments from the Muslim, Jewish and Christian cultures.

If you are thinking of a weekend getaway to Madrid, then Toledo is one of the places you absolutely must visit. Its proximity to the capital, the history of every corner of its streets, its gastronomy, and its location on the banks of the Tagus River, make this spectacular city a must-stop for thousands of national and foreign tourists.

During the reign of Charles V, Toledo was the imperial capital, and it has also been declared a UNESCO World Heritage City. The city has a very important historical and artistic heritage. To give you an idea, the writer Garcilaso de la Vega was born here, and the famous painter El Greco lived here for many years.

As a recommendation to make the most of your trip, we recommend you to park the car as soon as you arrive, and use your legs as a means of transport to go from one place to another. This way, you will be able to enjoy strolling through all the narrow streets of the old town and marvel at the style of the traditional village houses.

Without further ado, let’s delve into the top sites you must check out in this historically enriched city.

Toledo’s Jewish quarter is one of the must-see stops in the city. During your stroll through its streets, you’ll find different tiles with Jewish symbols on some of its walls and on parts of its floors.

For art enthusiasts, a stop we recommend is the El Greco museum, where you can enjoy the paintings of the celebrated artist who once lived here, as well as many others. 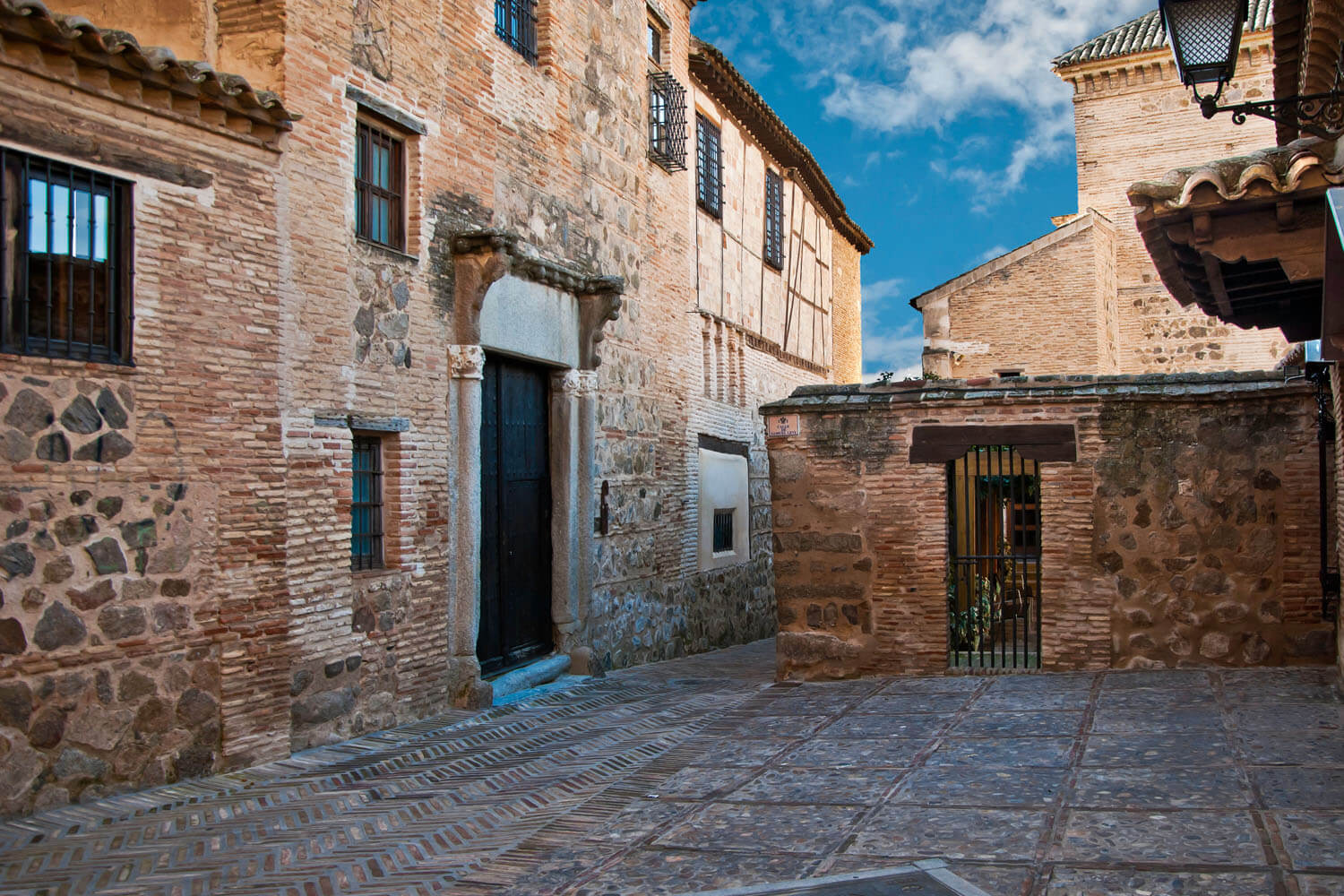 This square is considered the Plaza Mayor, in Madrid of Toledo. As one of the most beautiful squares in the city, it’s quite large and the buildings are very well preserved. The façade of the houses in this square has a very elegant and coquettish look. This is the epicentre of the city and this is where a lot of streets converge.

You could say that it is a “passing through” square from which you go from one place to another. You’ll surely pass this place several times without making a big effort to find it.

We can guess that its name comes from the Arabic: sūq ad-dawābb and means “market of beasts of burden”, as animals used for carrying items were sold here, such as horses and donkeys, etc.

What is more, next to the Plaza de Zocodover is Calle Sillería (where our office is located), which is where the saddles were made for horseback riding and those animals that were sold there in the square. It was also the site of inns, where travellers passing through the city could make a pit stop. 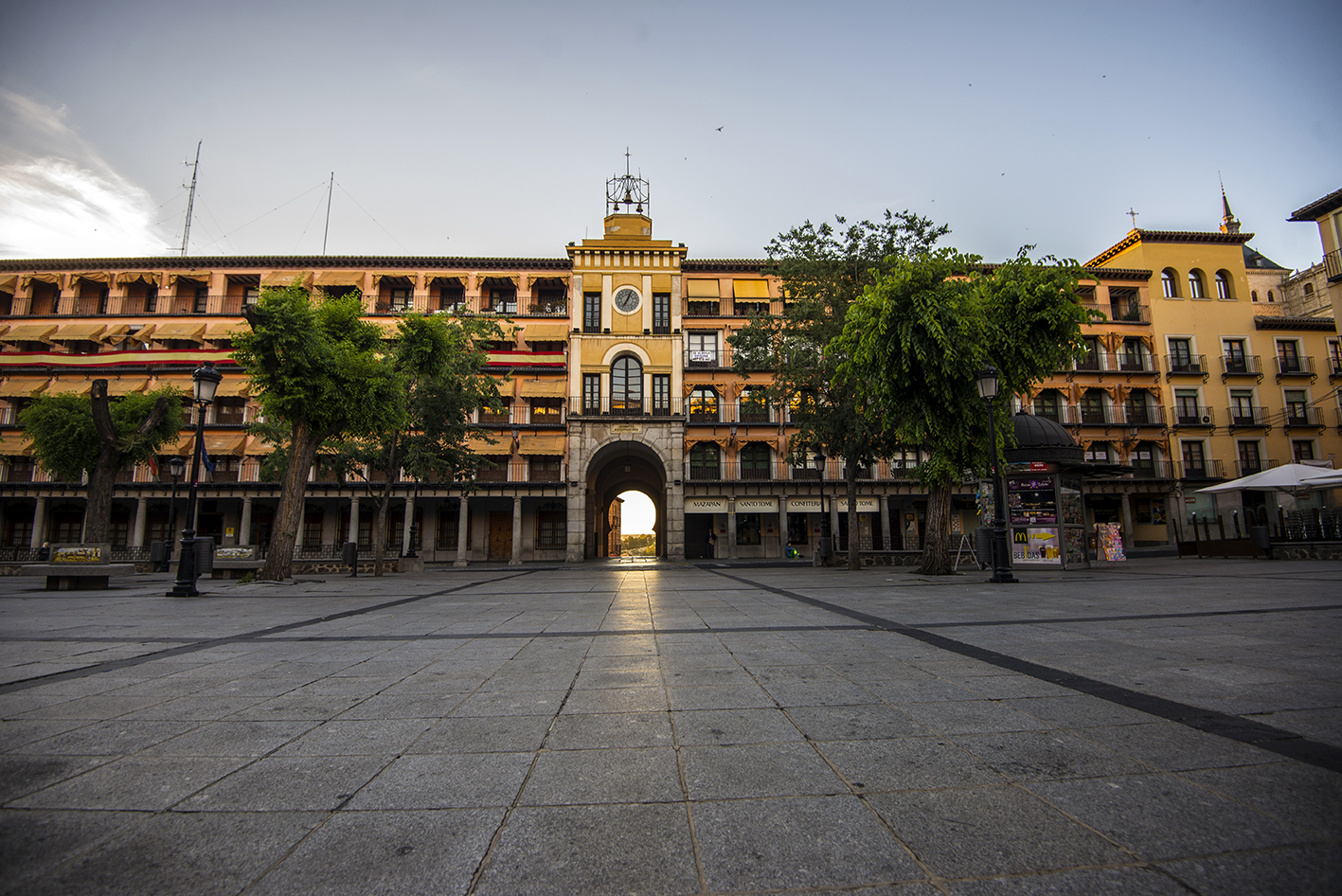 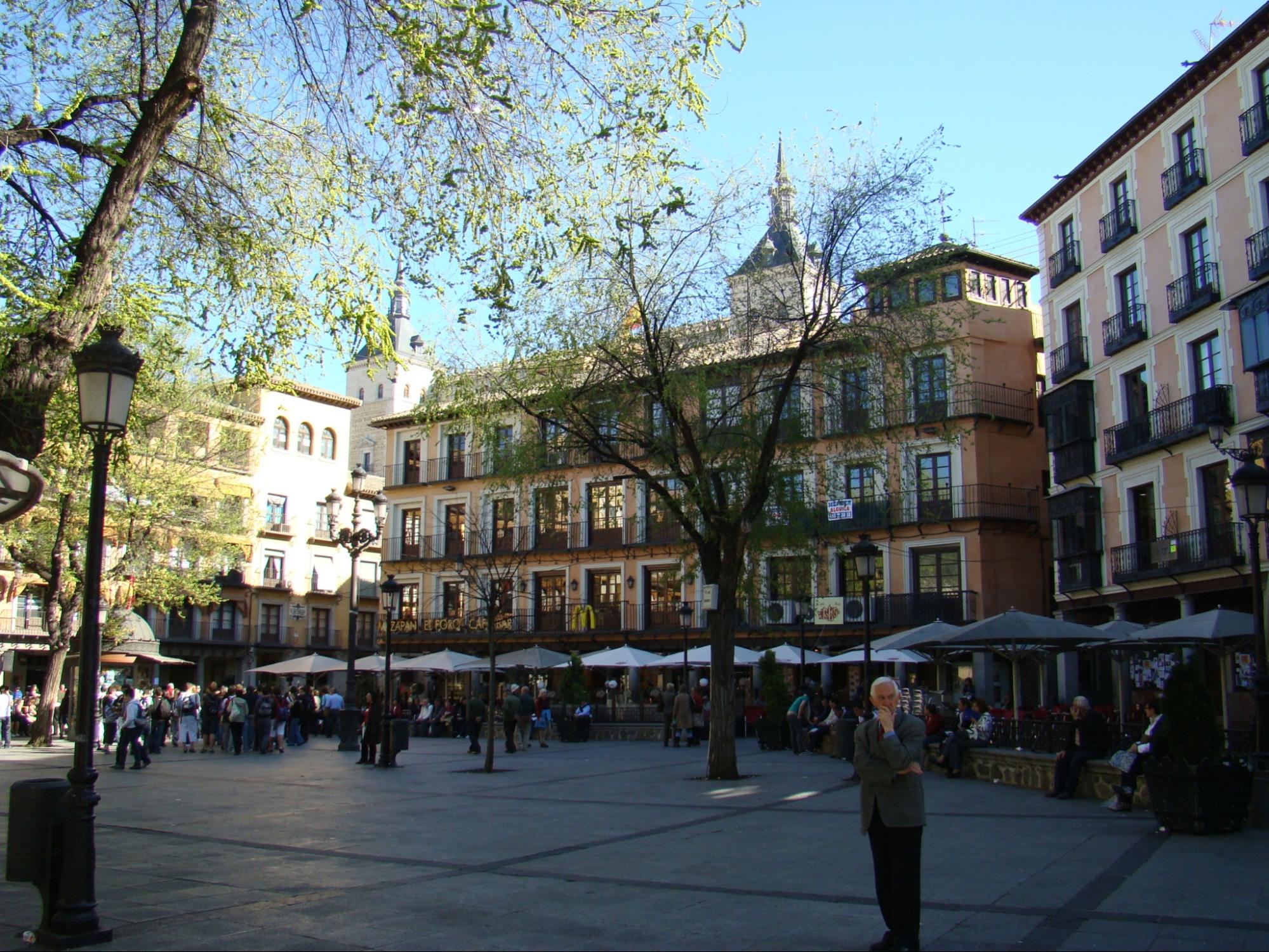 When approaching the city by car, the first thing that strikes us is the Alcázar of Toledo. It’s a military fortress that presides over the city from its highest point. This fortress was of great use due to its high location, which allowed a better view of the territory and made it difficult for enemies to access.

Inside this fortress, you can find the Army Museum and an archaeological site. Without a doubt, the Alcázar is one of the best places to see in Toledo. To make sure you don’t miss it, we recommend you buy your tickets in advance and avoid waiting to make the most of your visit to the city. 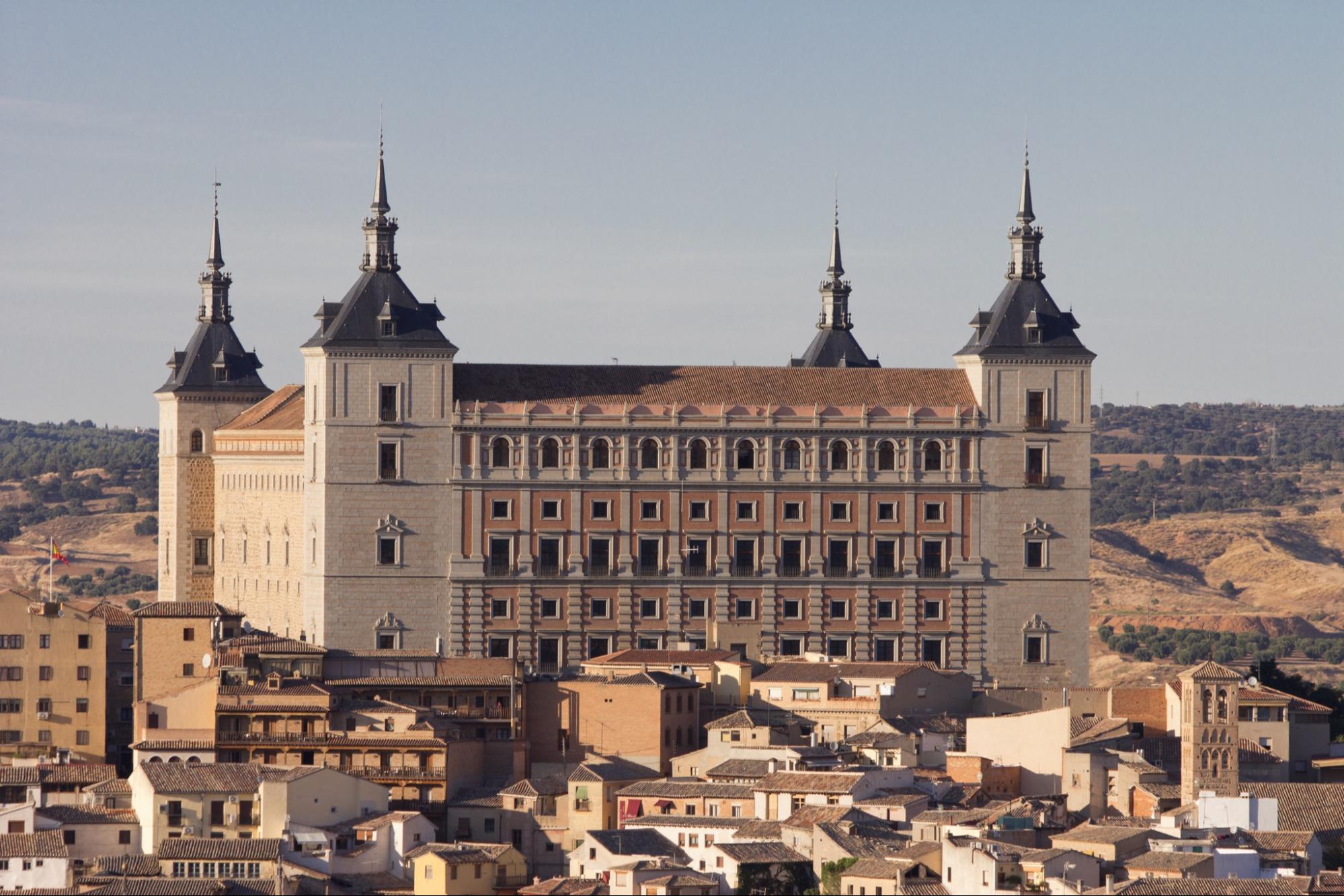 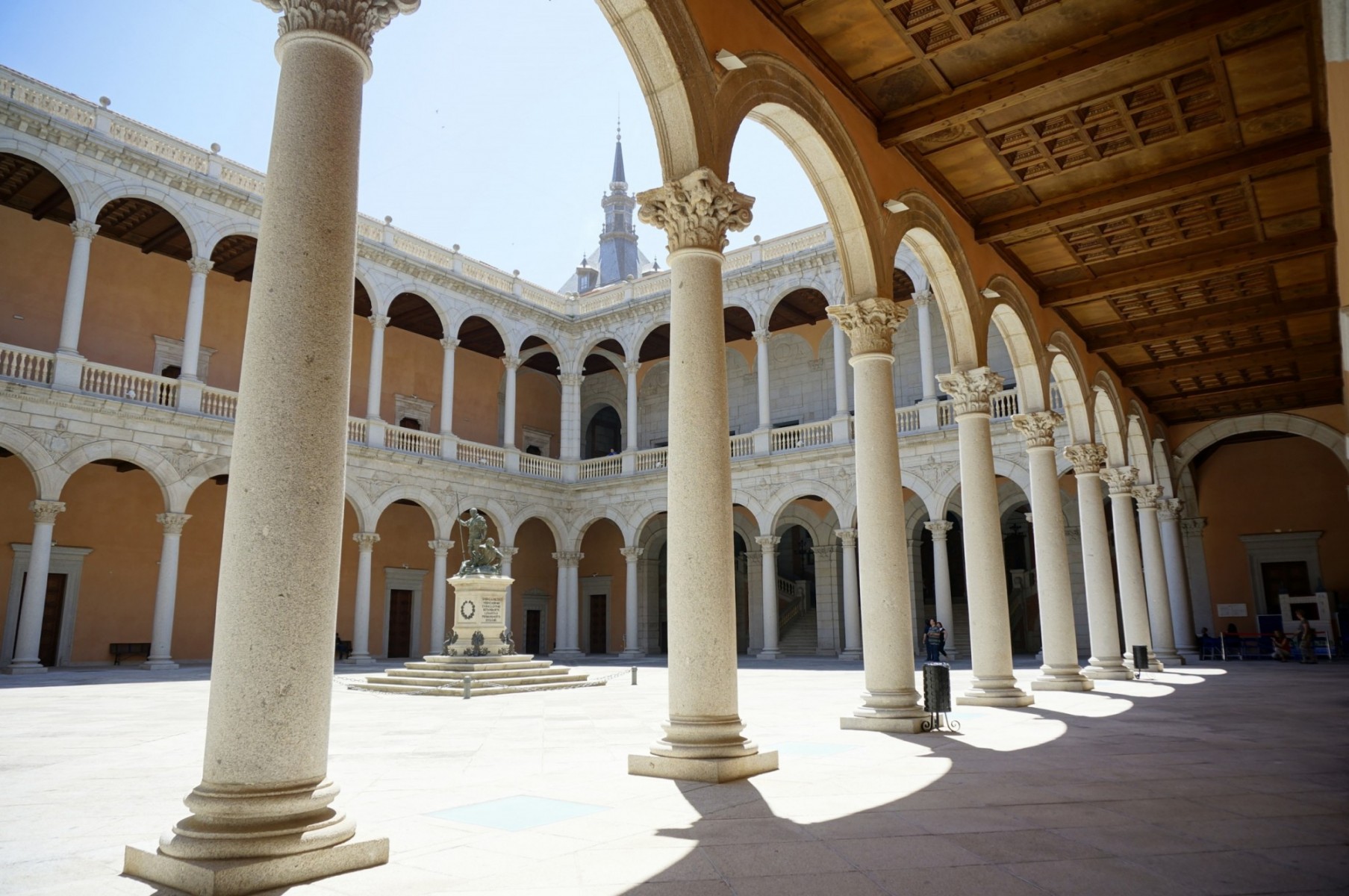 Inside the Alcazar of Toledo

After the Alcázar, the next essential place in Toledo that we recommend is, of course, the Cathedral of Santa María. You simply can’t leave Toledo without appreciating its cathedral, either from the outside and/or the inside.

The cathedral is Gothic in style and was built in the 13th century. In the Plaza de la Catedral you will also find the Town Hall, the Archbishop’s Palace and the other tourist office.

This enormous cathedral, another of the best places to see in Toledo, took more than two centuries to build, and, without a doubt, so much work was worth it.

On the outside, it stands proudly as a picture-postcard cathedral, and on the inside, its architecture and the decoration of its murals with pieces by El Greco and Goya, among others, make it a kind of art museum. Along with the rest of Toledo’s historic quarter, it is one of the 48 sites declared World Heritage Sites in Spain.

We recommend you to walk around the cathedral at night, as you will be able to enjoy the illumination of its façades, and it will give you the feeling of being in a different kind of cathedral. 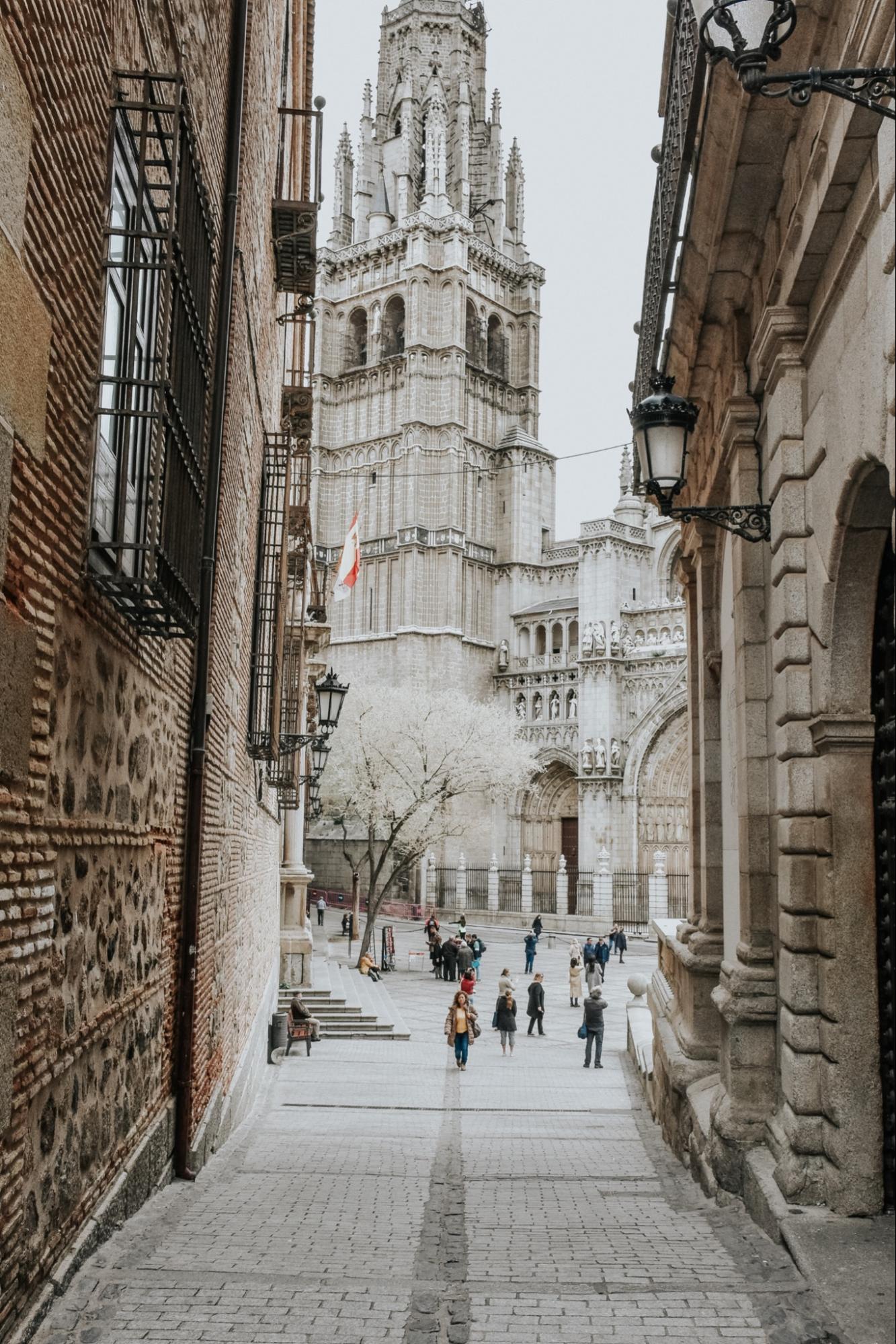 One of the things to see in Toledo with children is the San Martín Bridge. This bridge is famous for its zip line across the Tagus River, and for the views of the city from here. You can book in advance so you don’t miss out on this fantastic experience.

However, if you want to enjoy an equally beautiful view of the city, but without the thrills of riding the zip line, you can visit the Alcántara Bridge.

Crossing the Alcántara Bridge, you will be able to see the Alcántara Gate, which gives access to the city of Toledo across the Tagus River. Once you get to the other side of the river, you will find the Castle of San Servando, nowadays converted into a hostel, and from where you can take one of the best pictures of the city. 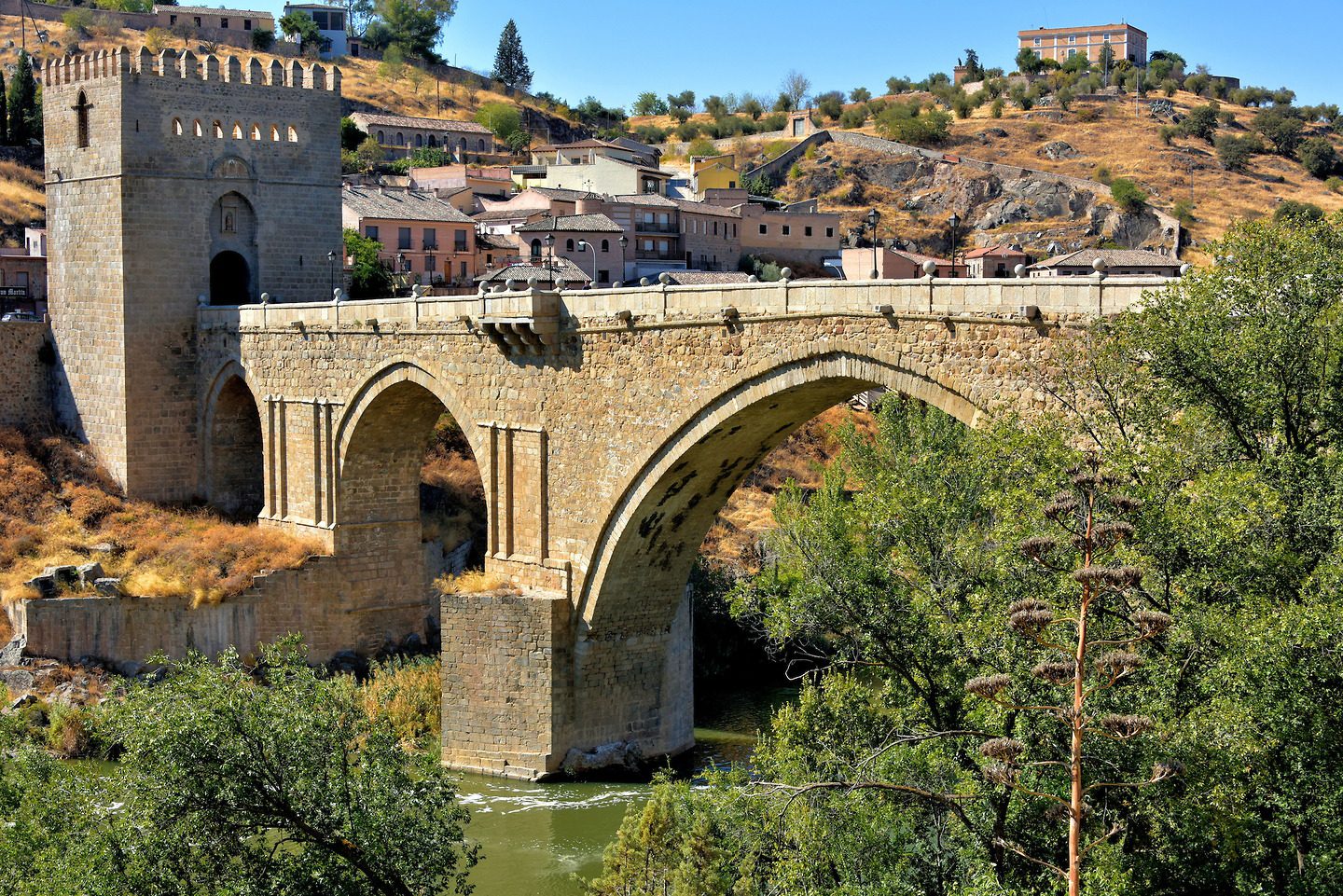 The city of Toledo is breathtakingly beautiful whichever way you look at it, and for this reason, there is a wide variety of viewpoints from which you can take the perfect photo. These viewpoints are usually on the other side of the river. 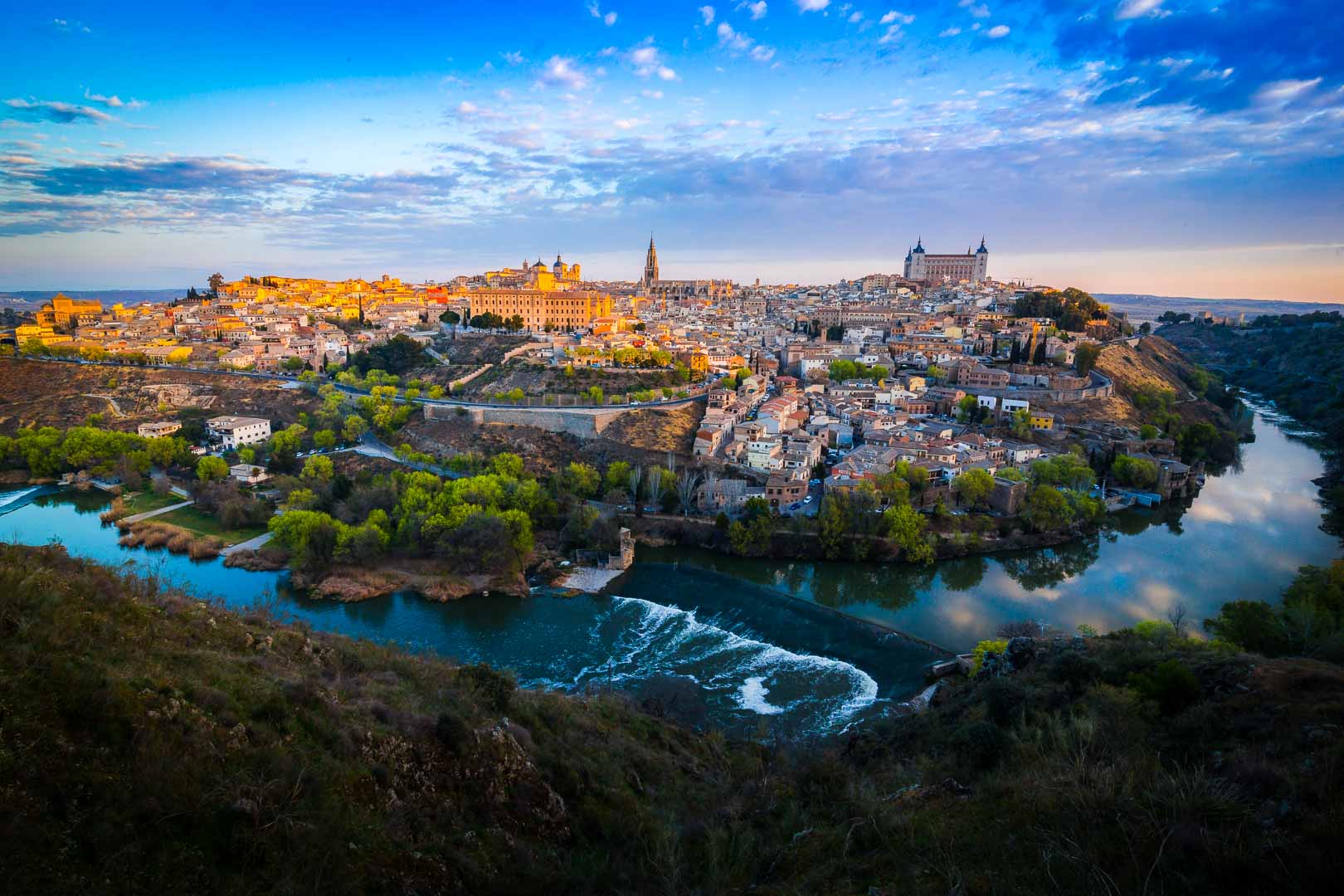 What to Eat in Toledo?

Toledo has rich gastronomy with typical local dishes that will not leave you unsatisfied if you are one of those people who like to enjoy good food. You should take into account that throughout the region, hunting is a very common activity, and many restaurants take care to obtain the best raw meats to give their dishes an authentic touch.

This is the case with one of the most famous local dishes, Perdiz Estofada (stewed partridge), cooked with different natural aromatic herbs, garlic, onion and vinegar. A restaurant we recommend is Restaurant La Perdiz where you can order a gazpacho manchego while you wait for this spectacular dish to be served.

Carcamusa is usually the dish par excellence for most tourists who choose to try something truly typical of Toledo. It is a pork stew with vegetables, characterised by its slightly spicy touch. 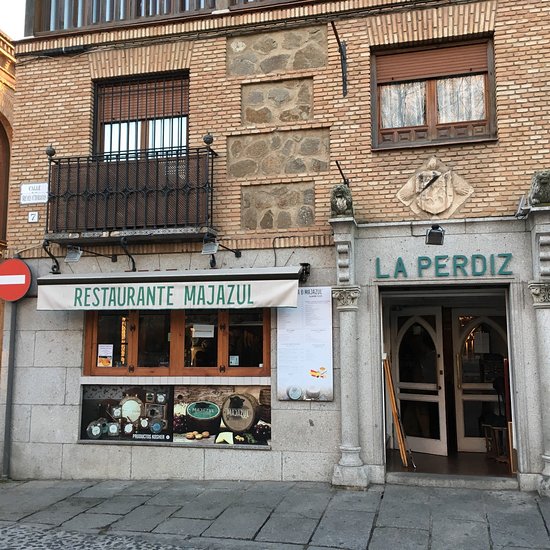 How to Arrive to Toledo from Madrid

From Madrid, you have the option of the Toledo Tour by AVE high-speed train.

In addition to the high-speed train ticket, this tour includes the Toledo Card which gives you access to the main monuments of the city, the tourist bus, the one-hour guided tour of the cathedral and a traditional lunch.

If you go with your family or group of friends, you also have the option of the Private Tour of Toledo.

Previous articleLa Cumbre: Tempt Your Tastebuds In This Wonderful Restaurant With Breathtaking Sea Views
Next articleFind the Trendiest Garden Centres in Murcia to Deck Out Your Backyard