The Royal House are wearing Vicente Gracia Joyas as they only accept pieces from the best artisan jewellers.

Vicente Gracia, are a goldsmith artisan fascinated by alchemy and they like to tell stories through jewelry pieces were recently named one of the thirteen best jewelers in the world by BBeyond Jewellery 2020, the refined publisher of the famous jewelry books, as we mentioned in one of our latest articles.

This proud mention is due to his impressive work as an “Artist-Jeweller” as all the pieces designed by Vicente are carefully custom-made jewelry pieces and that is why numerous times The Royal House has worn some of his pieces in different public events.

For those who don’t know, the only jewelry that the Royal House accepts are those made by artisans and which represent traces of the tradition of the place to be visited. That is why we were not surprised that the Valencian Generalitat commissioned the Valencian jewelry artisan Vicente Gracia to make a very special piece of jewelry as a gift for H.M. Queen Sofia of Spain.

The piece is a unique brooch made in the shape of a stylized fan which is an element associated with women. It is made in white gold and on it rests a harp, made in rose gold, an instrument that represents one of the two deepest feelings of the queen: Spain and music.

This brooch has the particularity of reflecting both rose gold and white gold, depending on how the light reflects. 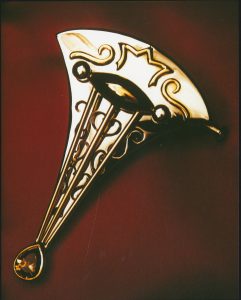 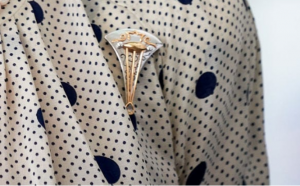 Therefore, thanks to the intervention of the artist, today her majesty has a brooch inspired by her and for her, adorned with a stone of the most beautiful purity that exists in intense colored diamonds. 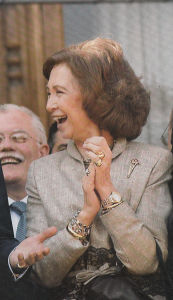 In particular, the queen asked Vicente Gracia to make her some earrings to match with the brooch, and the artist made the same design in a smaller size. 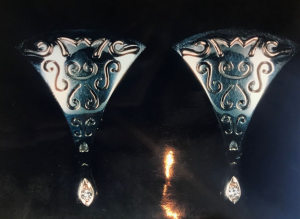 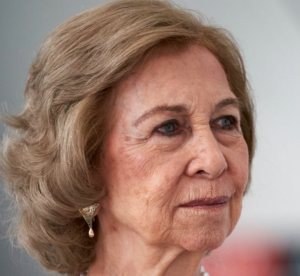 On the occasion of the tenth anniversary of the Jaime I awards, the foundation that grants these constituted among others by order of the ] Generalitat Valenciana, decided to celebrate such a great event by presenting H.M. Queen Sofia with this beautiful necklace. 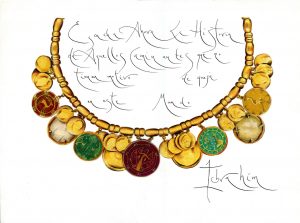 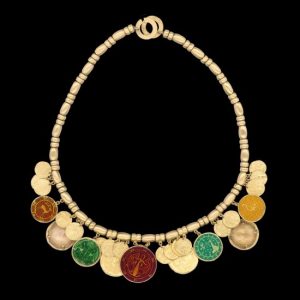 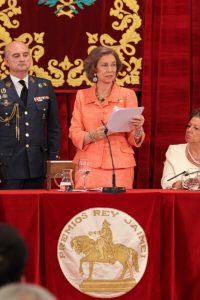 The earrings that Doña Sofia wears in the photo above have an eight-pointed star, an institutional gift that was also inspired by an esoteric design, which represents the expansion of the soul.

The long Arab tradition in the area is well known, that is why the design represents the Andalusian fountain, the source of life. It is the origin of the Valencian garden in all its glory.

The star means the expansion, in that classic garden where the four rivers of paradise converge, a beautiful piece made in gold, where the intricate drawing, takes us with the thought to immerse ourselves in a deep lethargy of past centuries.

They are topped by the Alif, the first letter of the Semitic alphabets, which has a double meaning as it symbolizes the number one and at the same time the name of God, that is, the presence of the divine. 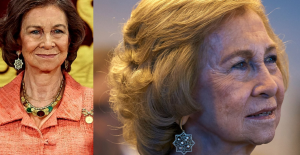 The pair of cufflinks below in yellow gold was made for H.M. King Juan Carlos I, they reflect the history and tradition of the Golden Fleece. Greek mythology tells us that Jason and the Argonauts, by covering themselves with the ram, became invisible and thus set off to ensure that Jason rightly occupied the throne of Yolk in Thessaly. 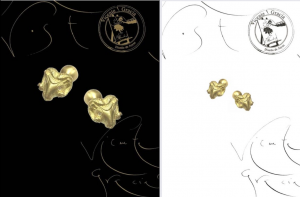 These are the earrings that were given to H.R.H. the then Princess of Asturias, they are simple and at the same time extraordinarily beautiful. The Lady of the Fishes, a very famous Moorish symbol in Valencia, encrypts a hermetic message. The two tails of the fish represent the material world and the spiritual world, united by the subtlety represented by a female figure.

On the occasion of the christening of H.R.H. the Infanta Sofia, the Generalitat Valenciana, on behalf of all Valencians, sends her the traditional “penjoll”. 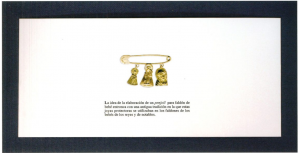 Thanks to Pablo Milstein for his research work on the article on which we based the information on this feature.

The Olive Tree in Moraira is a staple of fine dining, offering its customers the perfect balance of modern and traditional cuisine in a...
Best Restaurants