From breathtaking architecture, gorgeous plazas to vibrant locals , Valencia is a sightseeing dream with surprises around every corner.

Spain’s third-biggest city is synonymous with traditional Spanish culture. The historic centre of Valencia is easily walkable, oozing with charm, and holds most of the main tourist attractions. Formerly a walled city from the Roman period, the Ciutat Vella (Old Town) is made up of five neighbourhoods. 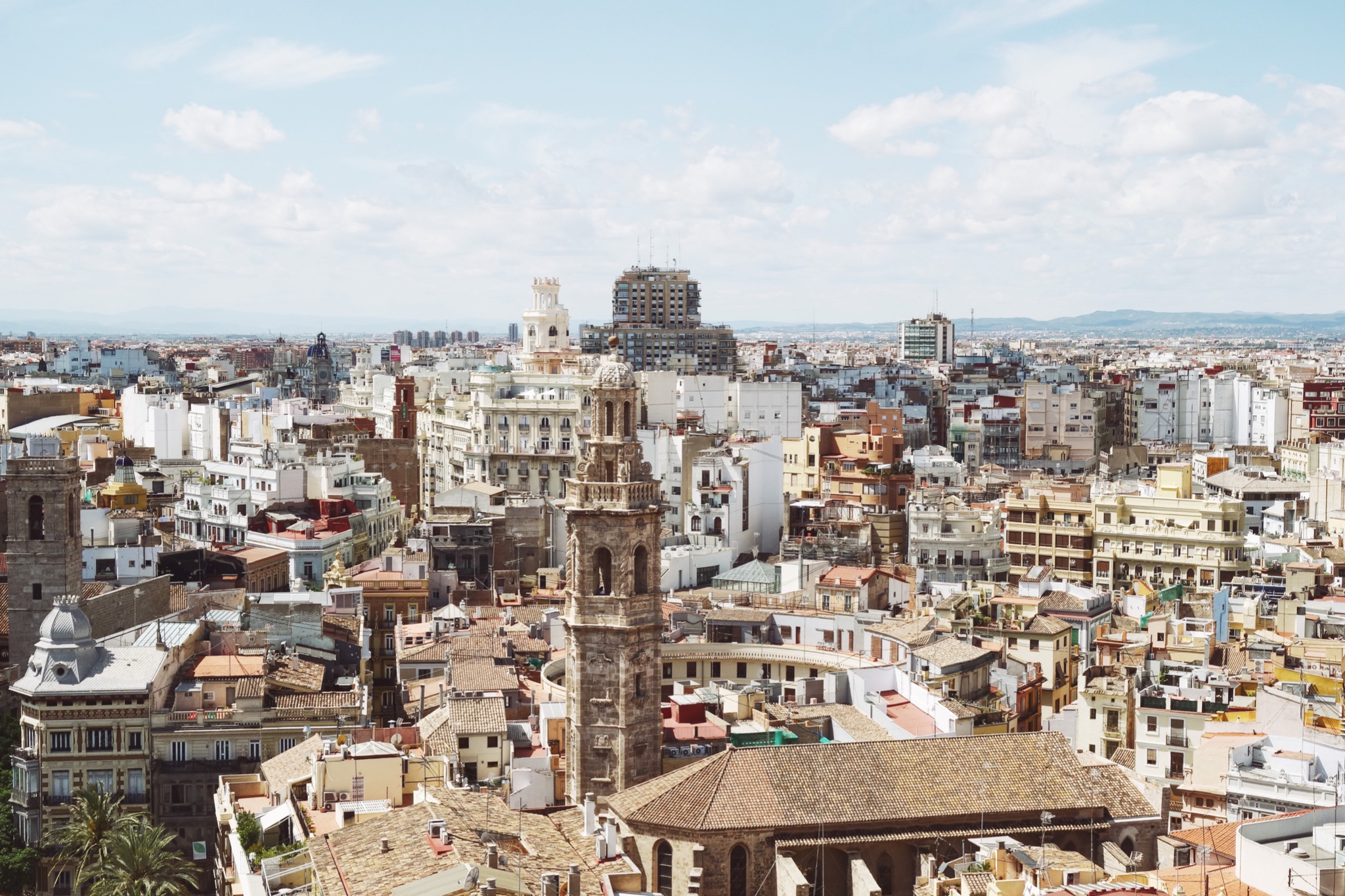 With a rich, artistic heritage, Valencia City is over 2,000 years old. Home to the Romans, Visigoths, and Muslims, it was founded in 130 B.C. and is one of Europe’s most historic and symbolic sites. As the city is full of stunning architecure from previous civilisations, you’ll fall in love as you wander its cobblestone streets.

This beautiful square stands out in the mind’s of many that have already visited Valencia’s historic district. Plaza de la Virgen is an enchanting site that dates back to Roman times, giving the city the perfect balance of history and modern day life. The spot is perfect for eating, drinking and just general people-watching.

The square is bound by three of Valencia’s most characterising buildings: the Cathedral of Santa Maria, Basílica de la Virgen de los Desamparados, and the Palace of the Generalitat. Here you’ll find various cafés and outdoor terraces that are typical relaxed way of Spanish culture.

The landmark is defined by its elaborate fountain, which portrays the god of Neptune, surrounded by eight women. Created by local scukptor Silvesdtre Edta, the sculpture is a representation of Valencia’s Turia River and its eight irrigation ditches. 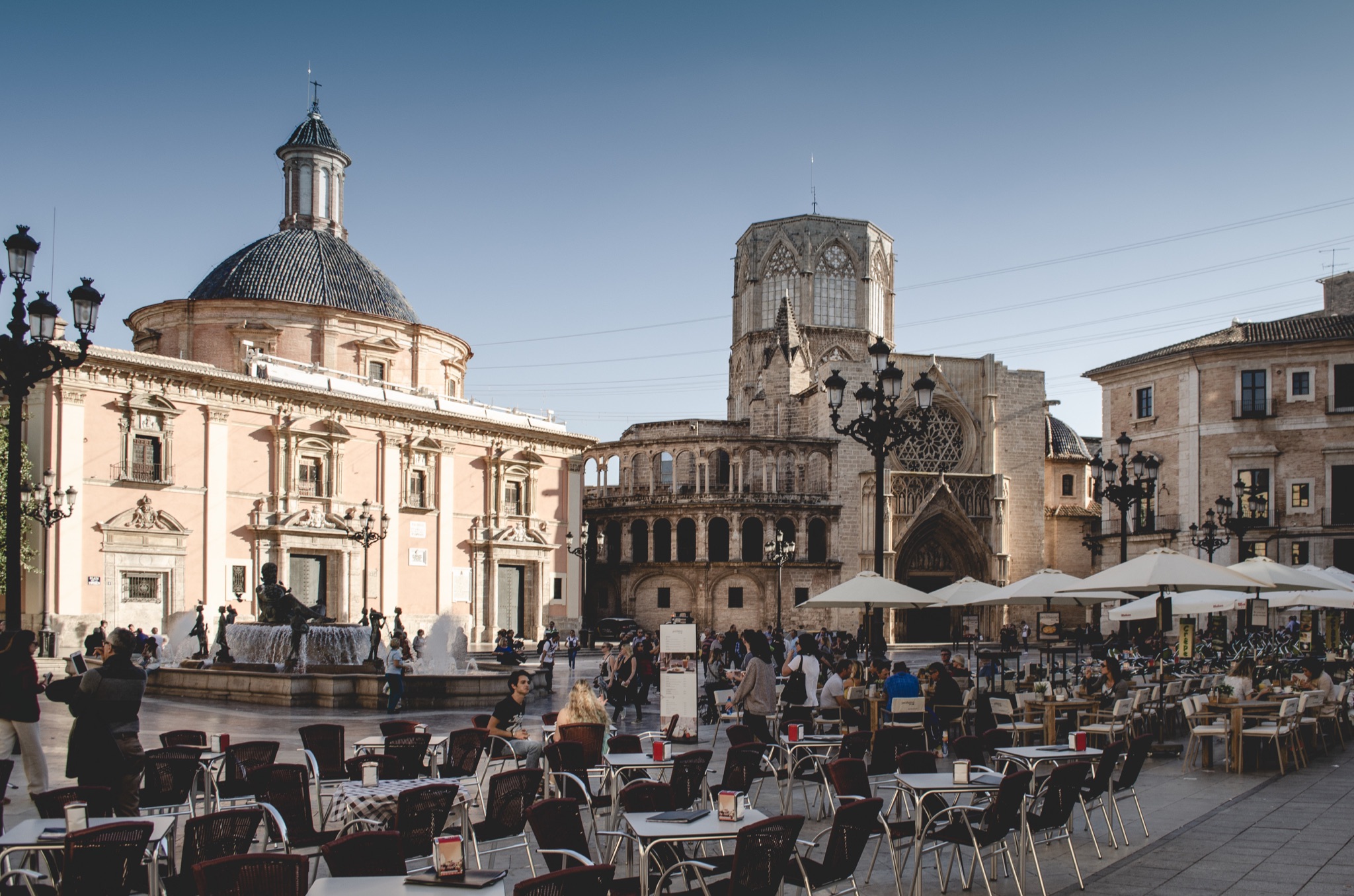 The Gothic Cathedral is Valencia’s most important religious symbol. Built originally in the 13th centure on the site of an earlier mosque, several changes and additions were made to it before its completion in the 17th century.

The Cathedral links two of the most iconic plazas – Plaza de la Virgen and Plaza de la Reina. The impressive structure boasts a variety of architectural styles, such as Romanasque, Gothic, and Baroque.

Regardless of whether you’re religious or not, this jaw-dropping Cathedral is definitely worth a pit-stop on your stroll. Audio guides come included with the entrance fee, and so you can learn about its history as you marvel at its beauty.

One of its most stunning features can be found inside the Chapel of the Holy Chalice, with a star vault depicting the image of heaven with the 12 apostles and the Coronation of the Virgen. 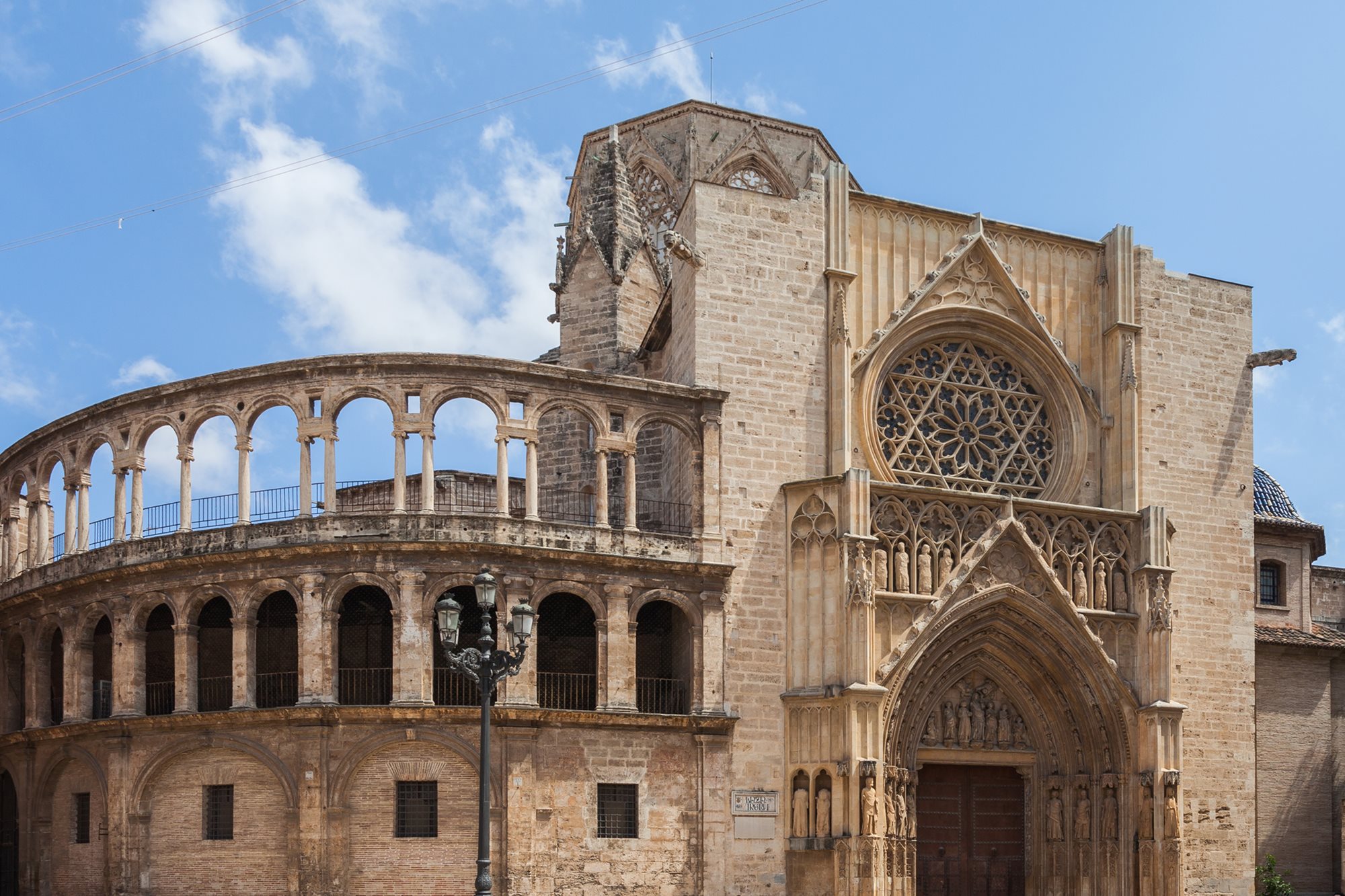 This Plaza is a uniquely shaped, circular square, found in the enchanting El Carmen neighbourhood. Built by Salvador Escrig Melchor in the 19th century, it was meant for fish and meat stalls to set up and sell their goods.

If you can, make sure to head there on a Sunday, where a lively and bustling open-air market takes place. The square is transformed into a spot of buzzing activity for street performers, music, and vendors selling all kinds of treasures from birds, to books, and artwork. 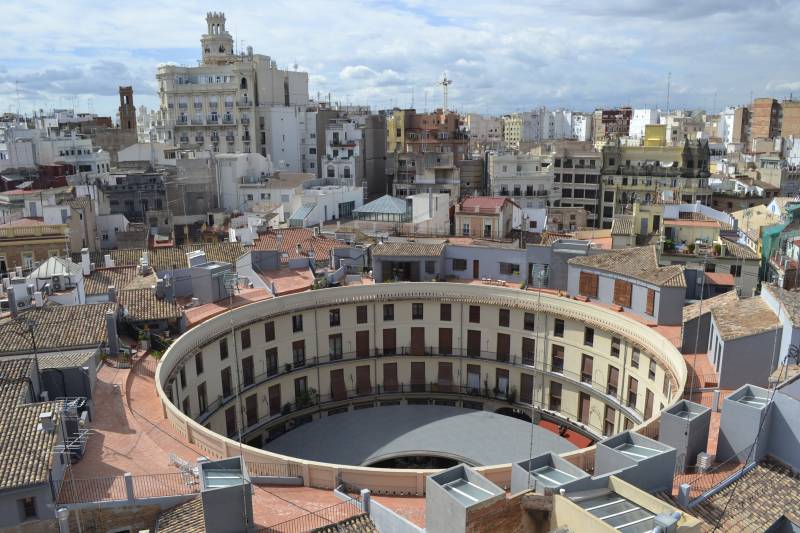 Next stop on our Valencia tour is an exemplary example Valencia art nouveau, the Colón Market. Designed in the 20th century by Francisco Mora Berenguer, the market is home to the finest restaurants as well as flower stalls.

Reminisce of Gaudi’s buildings in Barcelona, the large market is divided into three sections, closed off at either end by stone and brick arches. Listed as a National Monument, the market is located in of the areas with the highest purchasing power, associated with the bourgeois of its period.

Today, the market receives countless visitors everyday, and is especially crowded on the weekends. The market house are from 8.00am to 1.30am in the morning. Its busiest attractions and most popular eating places include Las Cervezas del Mercado, the café Bocados, and Daniel, a horchata stand. 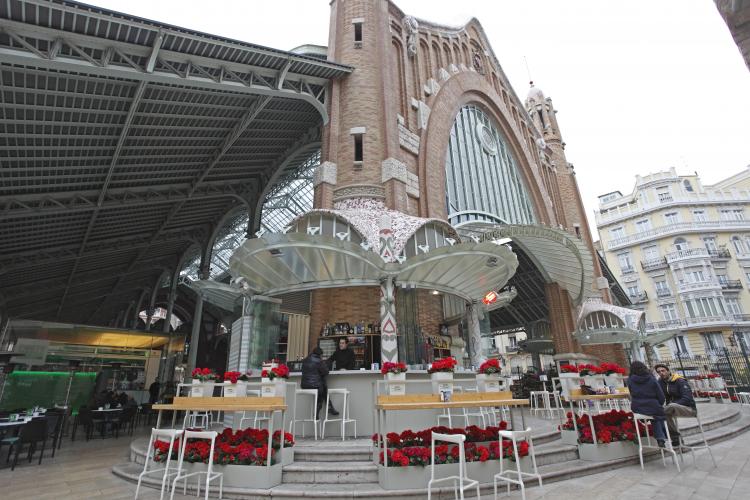 Ending our list with a bang is the impressive main square in Valencia. This grandiose Plaza is the best point to start venturing into the city. Here you’ll find the most prominent buildings such as the Neoclassical Town Hall (Ayuntamiento) and theCentral Post Office (Edificio de Correos), representing the typical Spanish architectural styles.

A magnificent sparkling fountain dominates the centre of the square, surrounded by flowers and greenery, which is illuminated by multicoloured lights at night.

The square is a popular meeting point for locals to sell flowers, which is a Valencian tradition that dates back to 1924. This is where we recommend that you start your tour of the city, as you’ll find the lively narrow lanes that lead away from the square towards the Old Town.

Make sure to come here during the annual Fallas Festival, where the Plaza really comes to life with an outstanding fireworks display and the mascletas, the Valencian tradition of pyrotechnic displays. 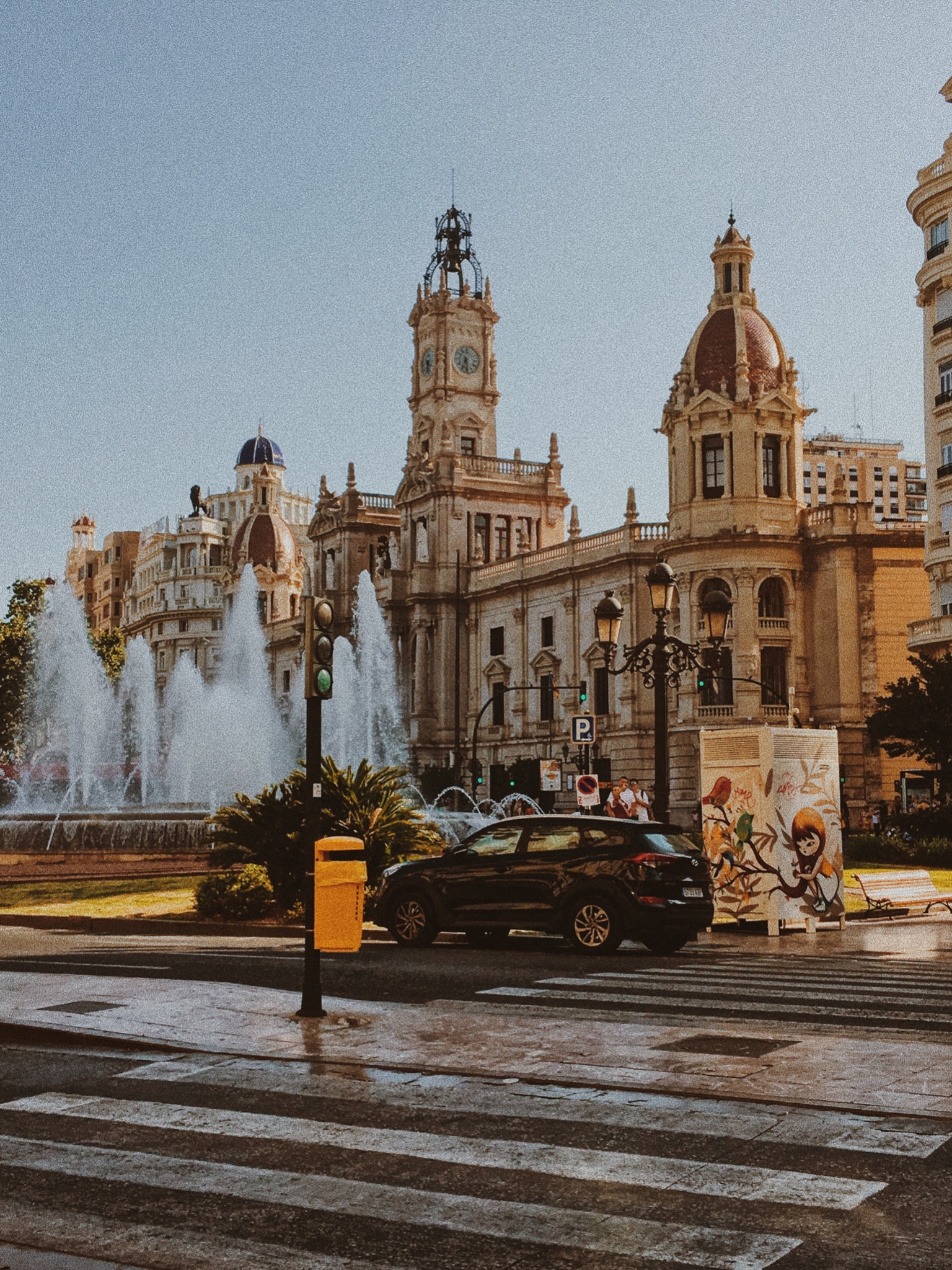