In case you decide to take a flight to Mallorca, Menorca, Ibiza or Formentera, here are 10 restaurants in the Balearic Islands where you can eat well and try the islands’ recipes with local produce under modern or classic proposals and with the sea as a backdrop. 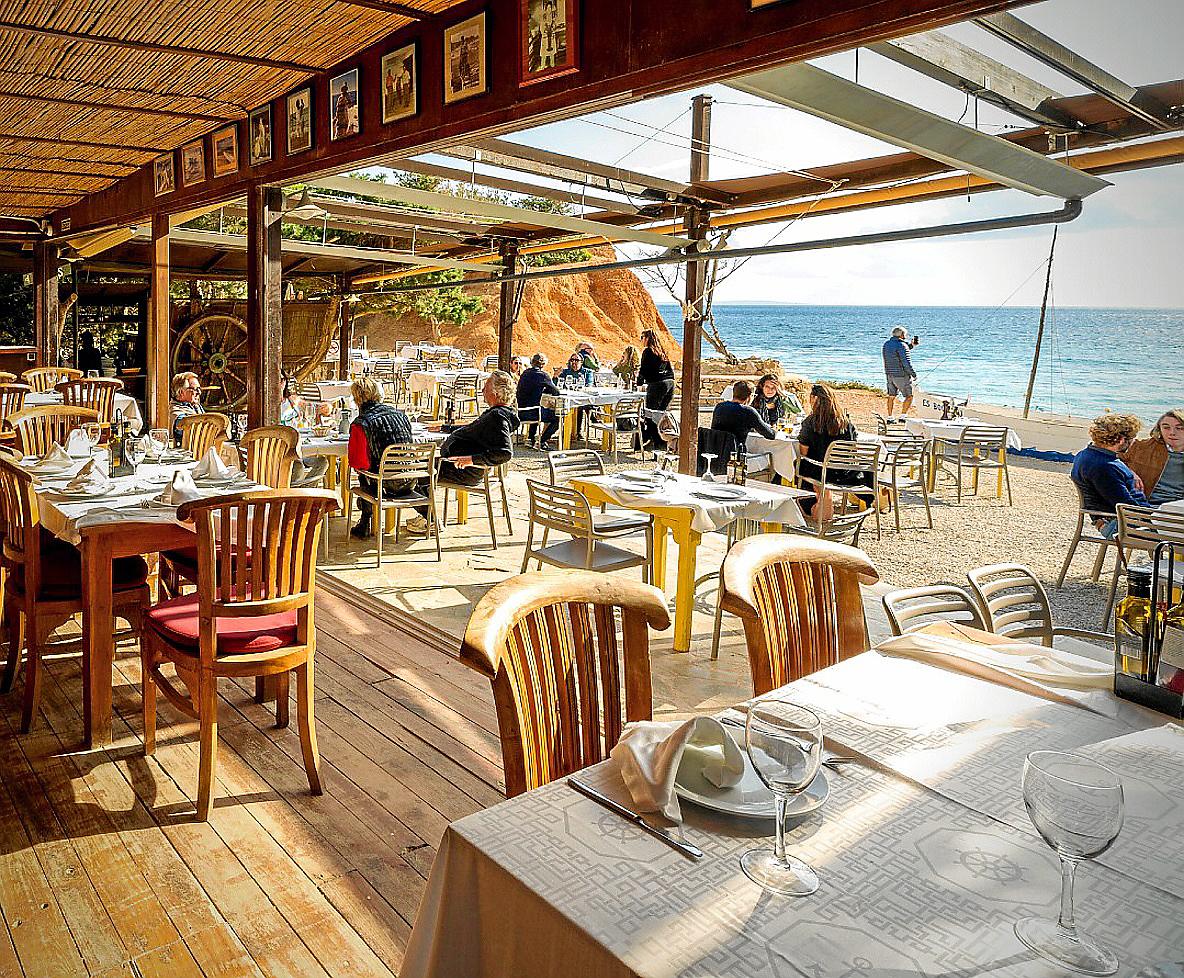 The Balearic Islands avail of exquisite gastronomy that is directly linked to cuisines such as those of Valencia and Catalonia. A Mediterranean cuisine, established for centuries, in which seafood products predominate, where vegetable gardens and farms have a privileged place, and where the traces of so many peoples that have passed through the islands throughout history, such as the Arab, the English or the French, can be found.

A cuisine that can be discovered through the best restaurants in the Balearic Islands where tradition and innovation go hand in hand, where creativity and avant-garde walk hand in hand. We review the work of the best chefs in the region, those who research and defend top-quality local produce with the help of dining room teams who are always up to the task.

If you want to enjoy gastronomy that has impressed the toughest critics – the Michelin inspectors – look to their coveted stars. And Mallorca now has nine restaurants to which the Michelin Guide has awarded its seal of excellence.

Chef Fernando Pérez Arellano’s Zaranda is one of them and is located in the Hotel Es Príncep. The other eight Michelin-starred restaurants include two in Palma: Adrián Quetglas and Marc Fosh, who remains the only British chef in Spain with a Michelin star. In the small town of Capdepera is Andreu Genestra. The only two-starred restaurant is chef Álvaro Salazar’s VORO.

Es Fum, at the Michelin-starred St Regis Mardavall Resort Hotel, has chef José Miguel Navarro at the helm. And in Puerto de Alcúdia, Maca de Castro is named after the only woman on the island to be awarded the prestigious star. 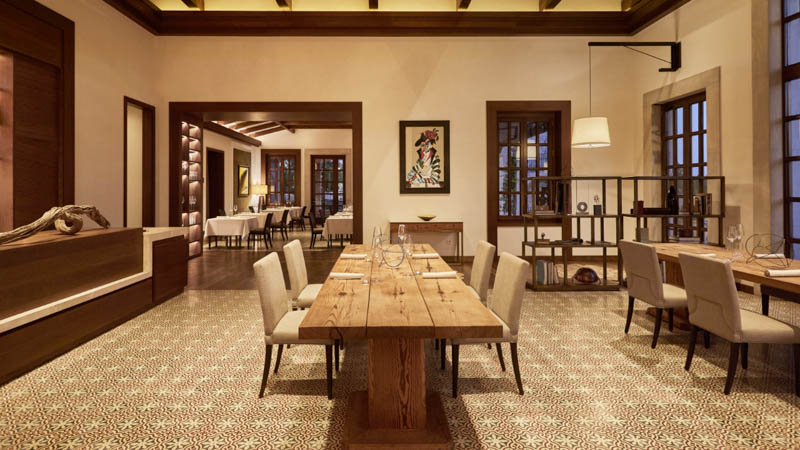 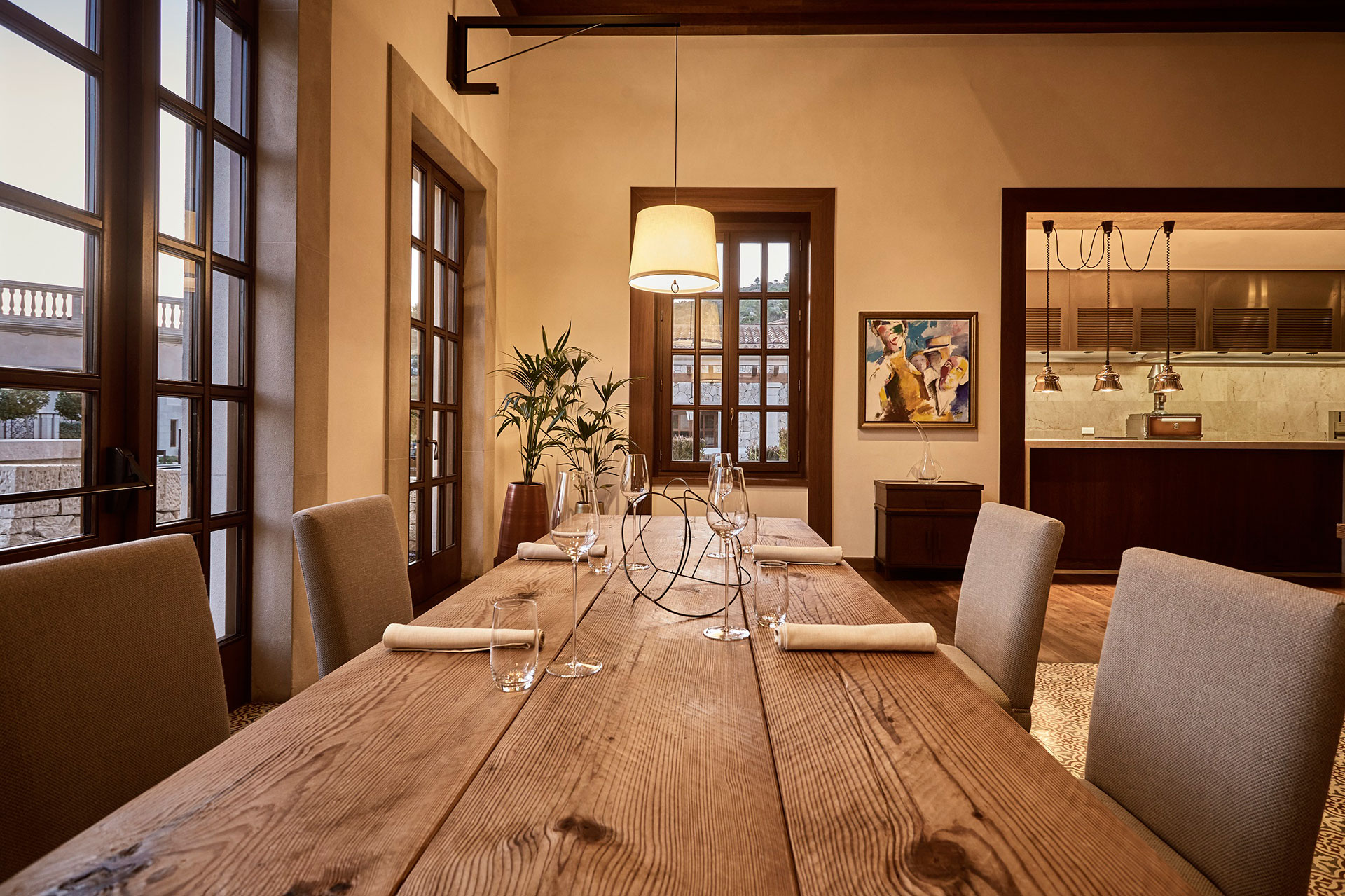 Sa Caleta is an excellent place to try typical Ibizan cuisine, that attracts both tourists and locals. This chiringuito is located inside a historic seafaring shelter on Sa Caleta beach in Sant Jordi de Ses Salines.

Among the must-try dishes are, on the one hand, rice dishes, among which the seafood Paella is a great speciality; and, on the other hand, there are dishes such as grilled ‘Rotja’, the typical ‘Bullit de peix’, lobster stew, clams in sauce, sautéed squid or Ibizan red prawns. For dessert, Flaó, a typical goat’s cheese and mint tart.

In any case, it should be noted that the menu varies according to the daily catch. It is also a place to sit down at sunset for a cocktail and, on many days, to enjoy live music. The average price per head is from 30 to 55 euros, which is very reasonable.

Mon is located in one of the most unique buildings in the Citadel of Menorca. The building, in the Deco style and dating from 1935, houses a restaurant with clean lines, aged wooden floors and classic details. The dining room is the final result of the work of the dining room and kitchen, obsessed with highlighting Menorcan-Balearic tradition and the avant-garde of haute cuisine.

The menu shows a return to the simplicity and naturalness of Balearic dishes, with a predominance of local ingredients and a return to essentials such as savoury coca, topped with anchovies, melon and brossat, a type of cottage cheese typical of Menorca, or simple seasonal tomato salads with pickles and tuna. Hake is one of Mon’s most popular fish dishes, either prepared Roman style with roasted peppers and pumpkin or with a contrasting basil sauce.

We absolutely recommend the pork jowl, espardenyes and hoisin sauce, in steak tartar with an interesting dressing or in oysters with citrus pearls. There is no shortage of local starters, such as spicy sobrasada with honey, cod fritters or fried fish. Price range is between 30-60 euros. 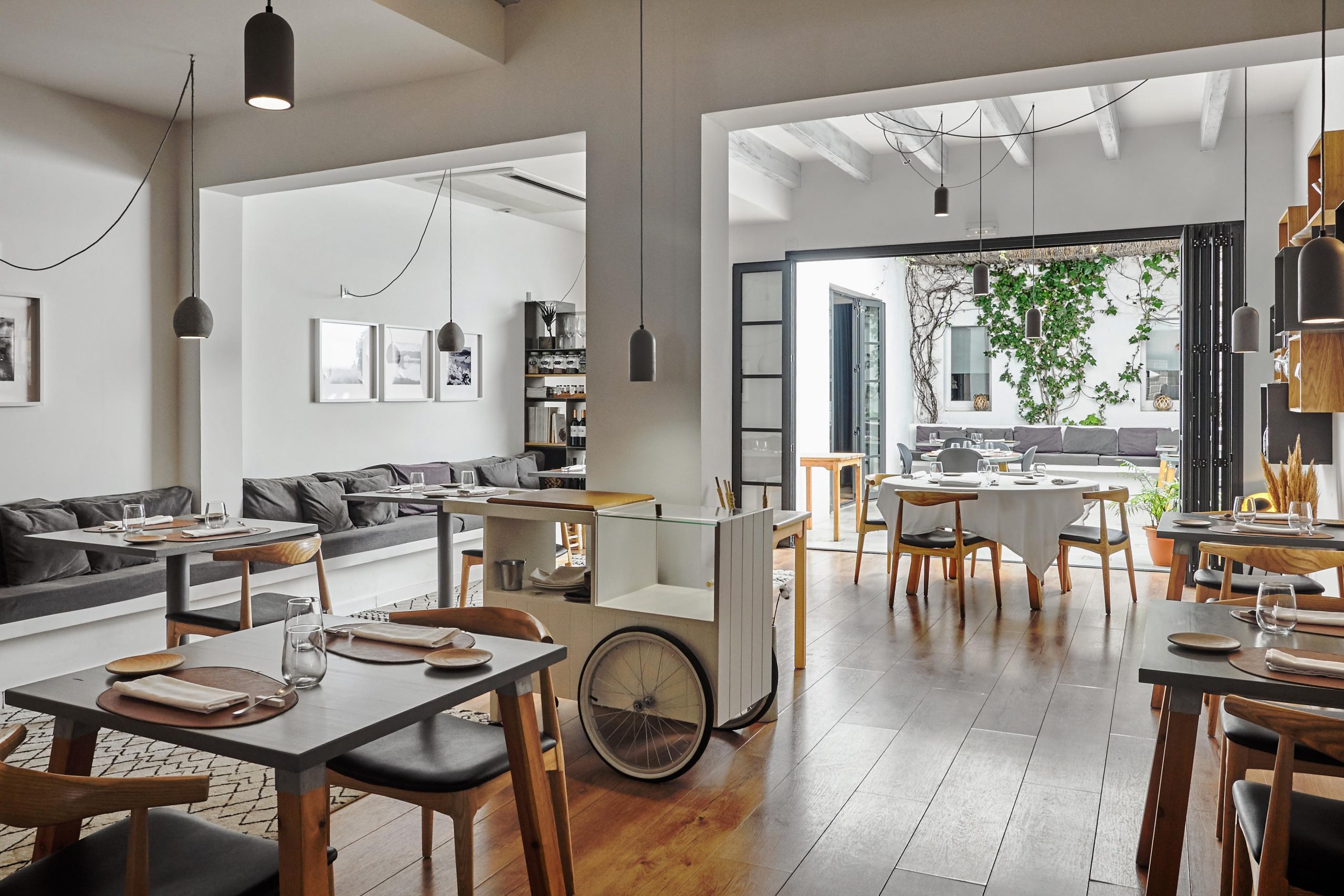 At HEART Ibiza, prepare to witnes an unexpected concept of multi-sensory leisure in which music, art and gastronomy merge in Ibiza, synonymous with the most varied leisure activities on an international level. The artistic and magical creativity of Cirque du Soleil takes care of the visual side, while the particular gastronomic styles of Albert Adrià add flavour to the experience.

In addition, the Adriàs’ varied gustatory background – a gastronomic heritage that embraces flavours from all corners of the world – is paired with the avant-garde entertainment created by skilled experimental artists. On the speakers, contemporary music is performed by various bands and artists; on the decks, DJs and top music selectors.

The tour at HEART Ibiza begins with a welcome at Terrace, a first stage to whet your appetite with a unique aperitif, enjoyed outdoors, overlooking the stunning views of the harbour and the historic centre of Dalt Vila.

On this terrace, you can enjoy a succession of delicate bites created by chef Rafael Zafra, such as the potato cube with wagyu tartar, the excellent Gilardeau oysters with kimchi or the lime and mezcal amber. After the festive and relaxed start to the evening, the dinner continues with Dinner. In this space a house band welcomes the diner creating a special sound atmosphere. 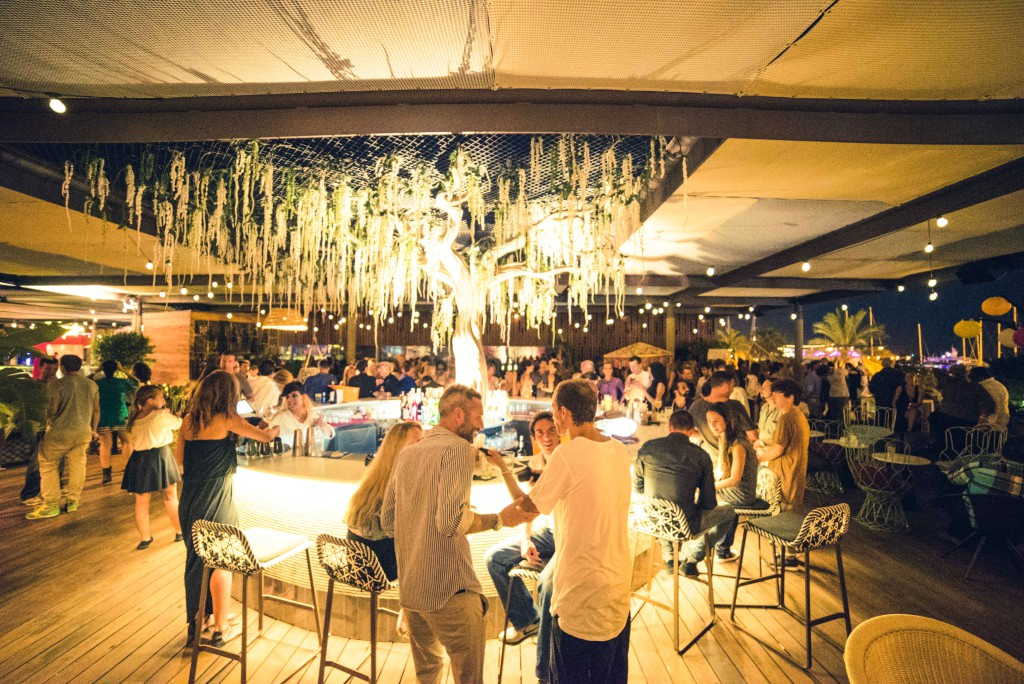 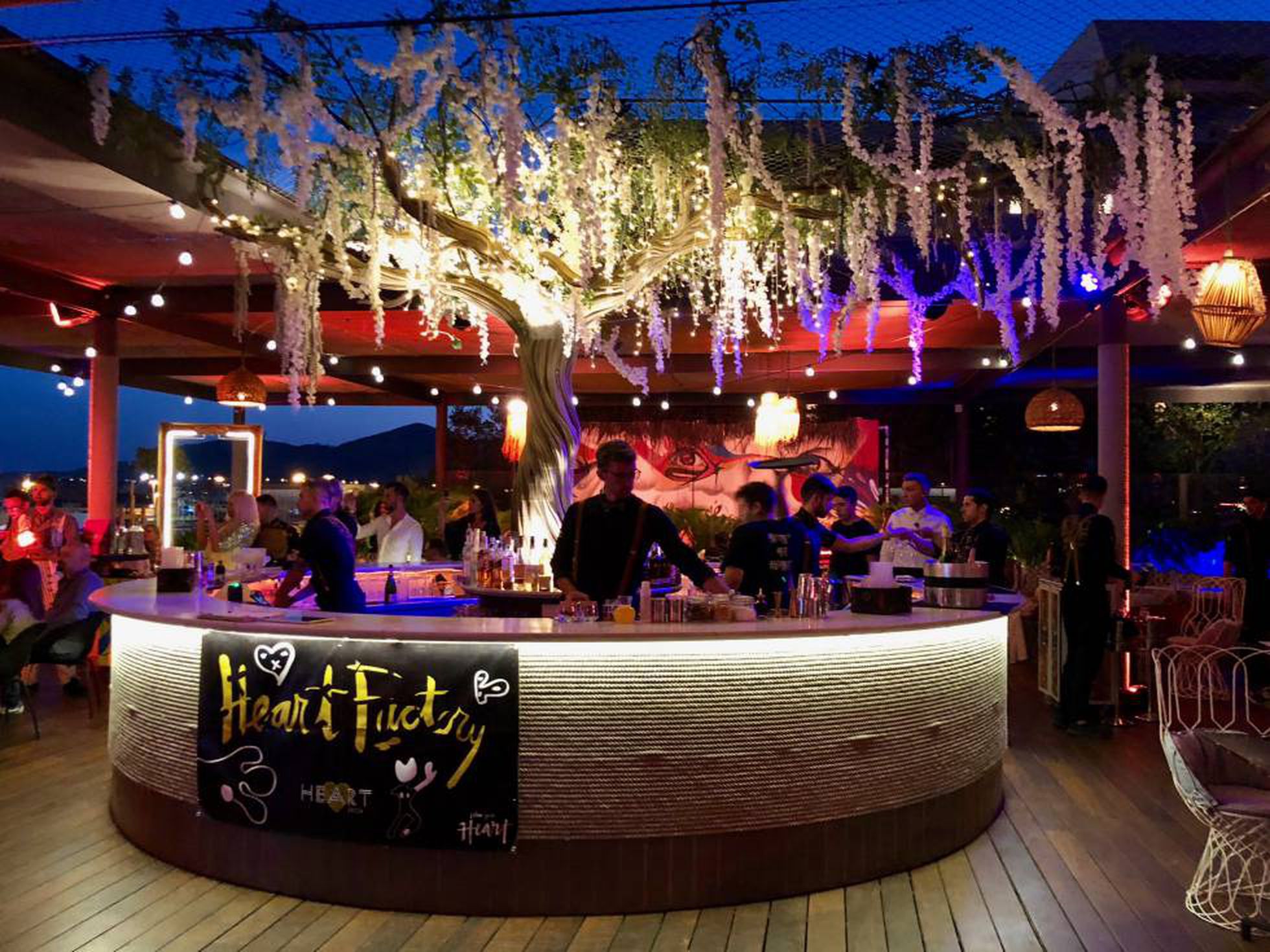 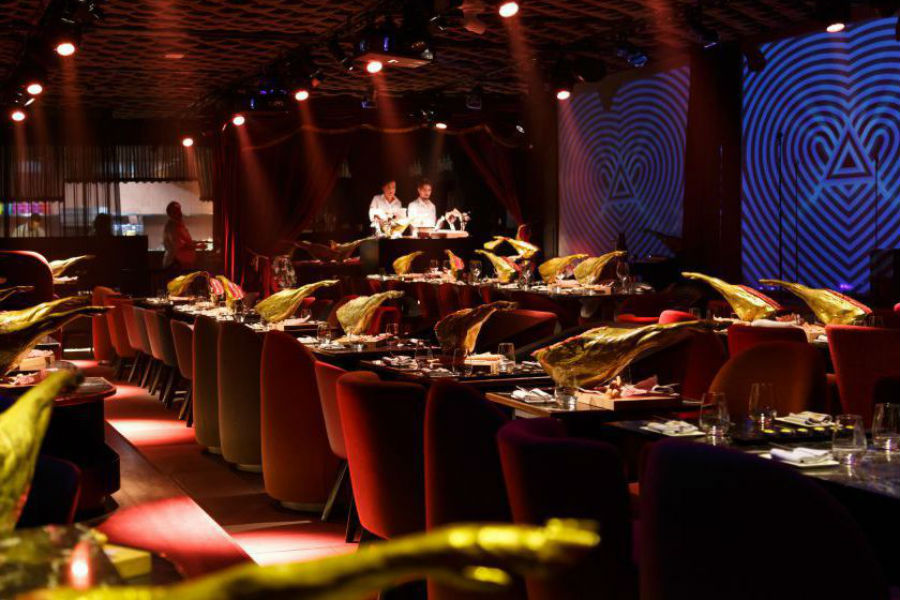 Macarena de Castro is a Michelin-starred chef who heads a family hotel group with several businesses on the island. Maca de Castro is its parent company in Alcudia, which will not reopen until May 2021. In the port of the Mallorcan town, the chef does operate El Jardín, in a bistro format, while her brother, Dani de Castro, has Danny’s Gastrobar open, another of the DCastro family group’s businesses.

But for a taste of the chef’s cuisine in the 2020 season, your best bet is to visit Andana, her new project opened in Palma’s old train station. If the chef has been insisting for years on ‘zero kilometre’ cuisine based on local produce, here she takes it to its maximum expression.

On the menu, you can try everything from kamado (grilled) vegetables or tomatoes in different recipes (ask for the spoon ‘Pà amb oli’) to cocas, entrepanes, fried eggs ‘de granja’ or legumes ‘en paellera’. The average price is between 30 and 45 euros per head. 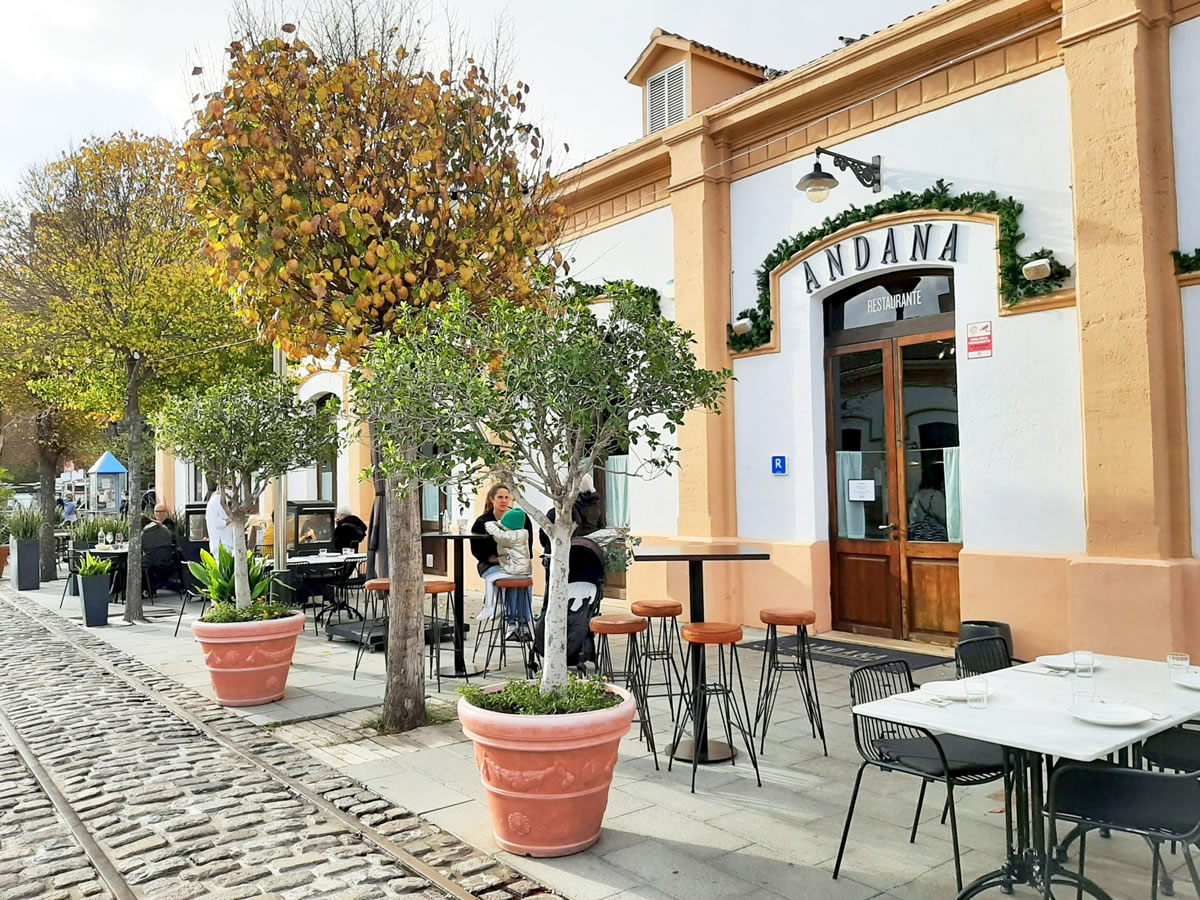 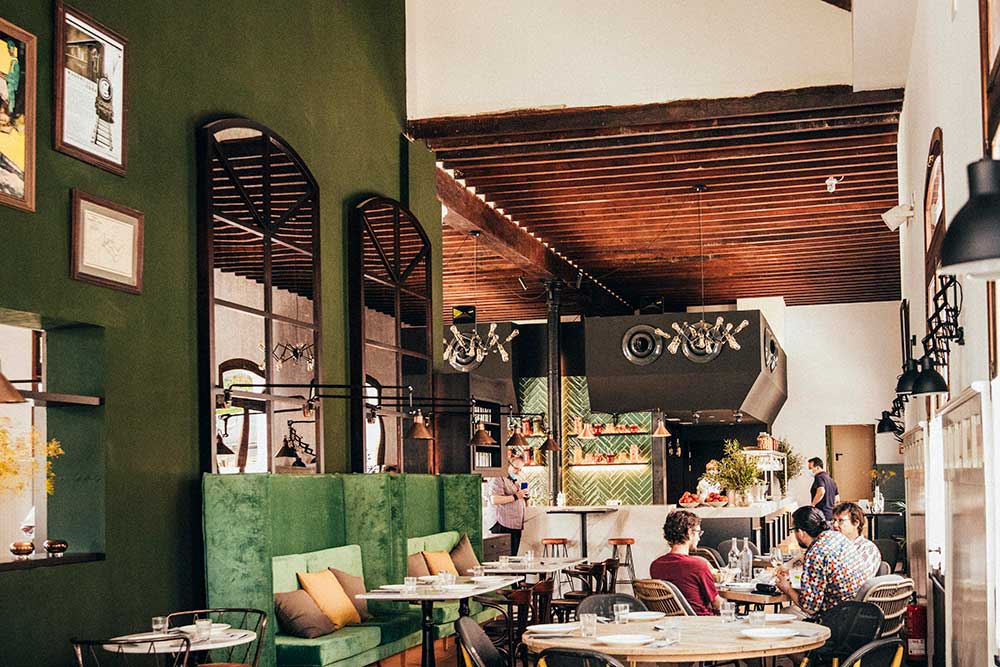 Another of the best restaurants on the Balearic Islands is something of an institution on Ibiza. It boasts of being “one of the oldest restaurants on the island”: it opened in 1934 as Verner y Gertrudis, until two years later the business was taken over by the German-Jewish Hanauer family, who lent the name of their son Alfred as the name of the restaurant, which in 1941 was transferred to the Riera family, the current owners.

A place oozing with charm, it’s been committed for decades to a “traditional and family” format and a proposal based on “Ibizan and Mediterranean cuisine”, linked to products from the island.

You can start with an assortment of canapés made from country bread with anchovies and sobrassada or an assortment of breaded products: from prawns and croquettes to baby squid, squid, dogfish or fish roe.

There are excellent main dishes to choose from, such as the escupiñas (clams from Menorca), ‘Ca n’Alfredo’ soup, rice dishes or a good list of recommended Ibizan recipes, such as ‘Bullit de Peix’ with arroz a banda, ‘Guisado de pescado’ (a coastal fish stew), ‘Borrida de ratjada’ (a ray stew) or ‘Raons’ (‘little parrots’) with tumbet.

Average price per head is roughly 55€. 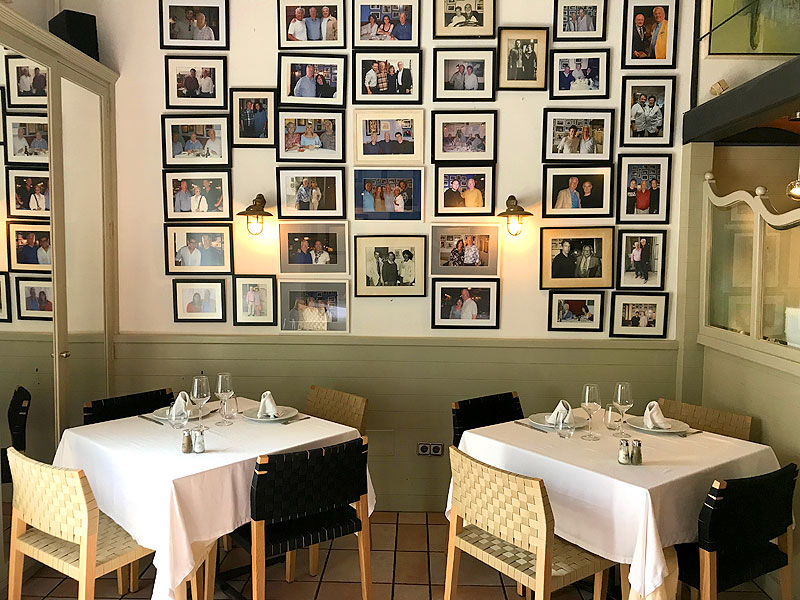 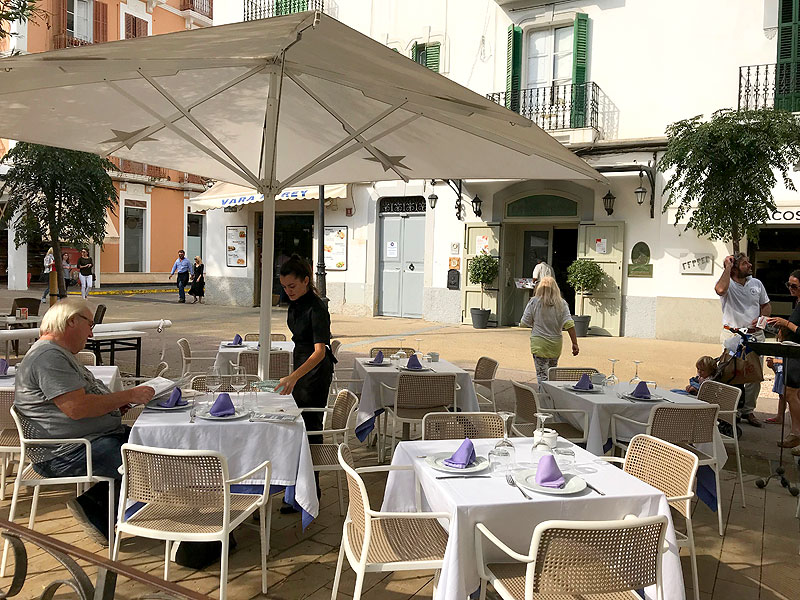 This is David de Coca and Mónica Cortassa’s business in Menorca. Located in Fornells, in this house the Menorcan lobster is a kind of religion: this critter caught with trammel nets (an artisanal art that uses 3 nets) becomes in the hands of this chef a delicious Caldereta de langosta menorquina, but also in rice, ramen, ceviche or taco. Another highlight to note: is the Lobster brava, with eggs and potatoes, with sautéed coral.

But there are many more dishes worth trying that are based on the island’s products. So, for example, don’t forget the rice dishes, such as the dry ‘esclatasangs’ (scallion), rib and langoustine. Expect to pay between 65 and 80 euros. 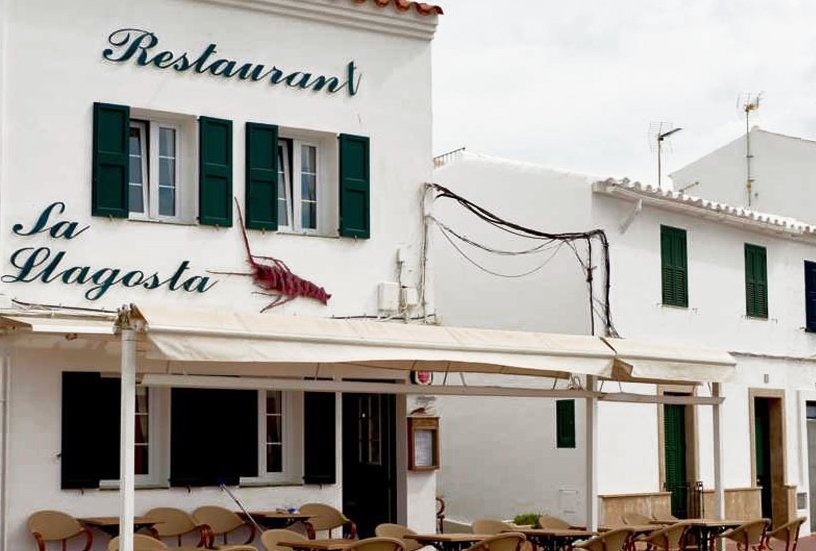 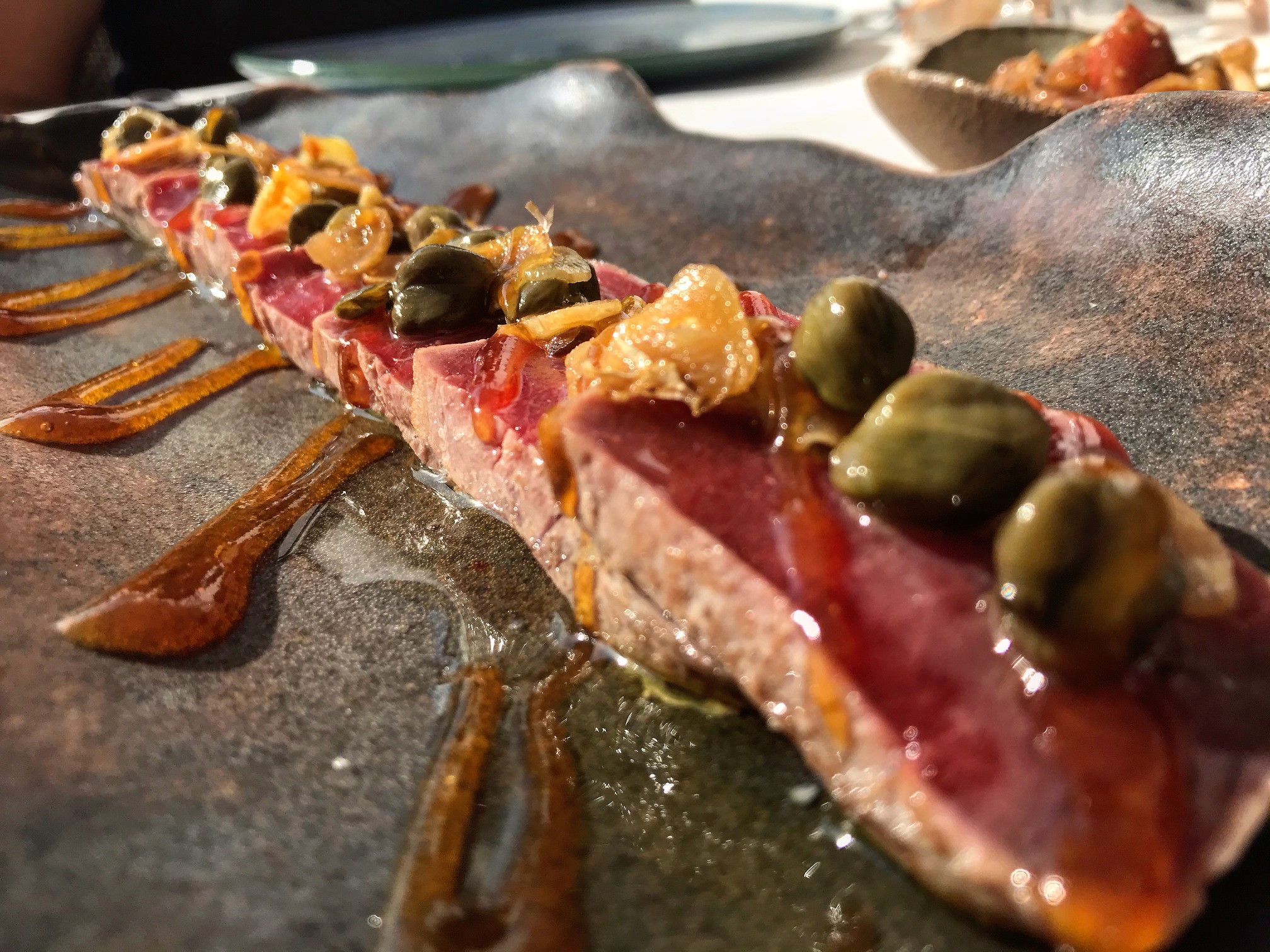 Previous articleTraditional Dishes from Valencia that You Have to Try
Next articleWhere to Eat in Calpe: The Essence of Mediterranean Dining at Essenza