Queenmania in the Benidorm Palace

If the question is which is the best front man of all time, without a doubt you will hear a voice in unison saying that it is Freddie Mercury and that one of the most important bands in history is Queen. The band that marked a historic milestone in music, breaking paradigms and concepts of the time, had a strong and risky proposal for the 70’s. That proposal won the critics and boos from experts in the field of music- However the public loved Queen and we can witness that watching some of its emblematic concerts anywhere in the world.

Queen attended countless tours, filling stadiums and stages with thousands of souls singing their songs. Bryan May, John Deacon, Roger Taylor and Freddie Mercury left the soul on stage. All their career has always been recognized as magical and frenetic, especially by the self-confidence of their vocalist, Freddie Mercury. He sang their songs to hundreds of people in one voice, unfolding a stream of emotions with each of his mythical movements that did not stop during the entire concert. Freddie’s voice held complex chords without tune at any time.

A short time ago was released a biographical film of the band called Bohemian Rhapsody, directed by Bryan Singer and Dexter Fletcher and the success was resounding. So much that it had several nominations in recognized prizes as Golden Globe Awards, Bafta Awards and International Palm Springs Film Festival. But it was at the Oscars where it obtained the highest number of gold statuettes, with a total of four awards as best actor, best editing, best sound editing and best sound. 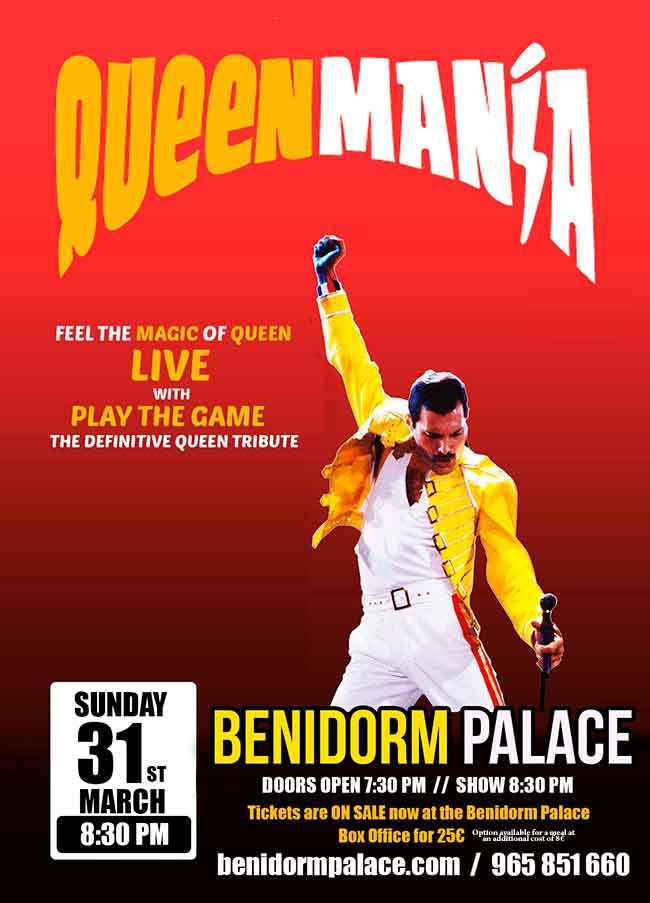 Now Queen is back in fashion. The radio music networks have put its songs back, occupying again the first places in lists as they did in the 70’s. Maybe some young people who had not had the opportunity to listen to it now feel surprised by its great popularity. Queen has songs for all moods, from unforgettable ballads to great party songs loaded with rock and roll. And now you can live them in the Benidorm Palace. Benidorm Palace could not be left behind with this trend and presents an impressive event on its wonderful stage. Queenmania is the unique opportunity to feel again the magic of Queen. Thus, Benidorm Palace presents the best Queen tribute band with a fantastic show full of emblematic and successful songs.

Queenmania is a spectacle with a dynamic rhythm in which this amazing tribute band recreates several of original videos of Queen and the staging of symbolic concerts. You will listen to legenday songs like ‘Another One Bites the Dust’, I Want to Break Free’’Bohemian Rhapsody’ and ‘We Are the Champions’. The show promises a trip back in time, where for a moment you’ll feel at Knebworth Park or Wembley. This great show will be exclusively for Benidorm Palace on March 31 at 8:30 p.m. Do not stay without a ticket!

You will find the Benidorm Palace at 13 Dr. Severo Ochoa Street, in Benidorm (Alicante). Visit this and other shows on the website of Benidorm Palace (https://www.benidormpalace.com). You can also call at the phone +34 965 851 660 or +34 965 851 661. Leave your comments and find out more about the upcoming events at their social networks.