In 2020, the prominent real estate agency Marbella Panorama celebrated half a century of booming business bliss. Let’s take a look at the humble beginnings and accomplishments of this hardworking family team. 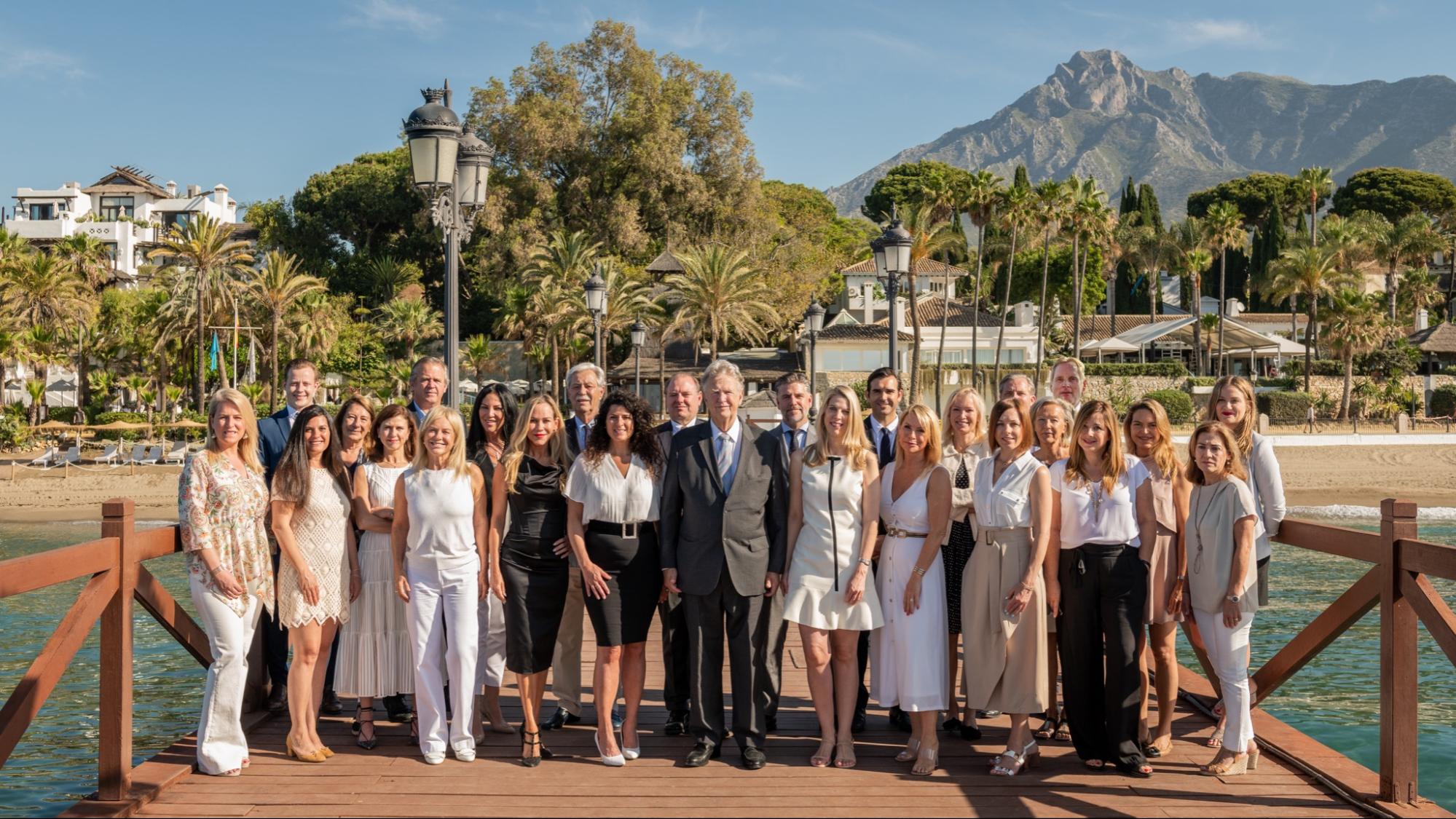 The oldest agency in the real estate sector in the city, Panorama opened its doors in Marbella in 1970, as one of the international branches of the US-based family company, Panorama International. In 1973,  Cristopher Clover, one of the sons of Williston (Bill) L Clover took over the Marbella office and in 1975 Panorama became an independent company.

The team at Panorama still strives to provide all their buyers and sellers, landlords, and tenants with a bespoke service, aiding them with a high level of attention, continuing with the values and principles laid out by Christopher’s father and grandfather over a century ago.

Throughout Costa del Sol, Panorama has a reputation that is hard to equal for its professional and straightforward dealings with its clients.

The ability to adapt in a sector that is in continuous evolution has been fundamental for Panorama Properties to have reached half a century of life as a reference agency in the luxury sector on the Costa del Sol, an anniversary that only shows the strength of the company thanks to its high level of demand and professional service.

According to Christopher, these values have been passed down from generation to generation in the Clover family, which started in the real estate business more than a century ago in the United States.

The team settled in the luxurious area of Marbella that attracted aristocrats, royalty, Hollywood stars and the most select Spanish and European society. A move that would later prove to be most beneficial. 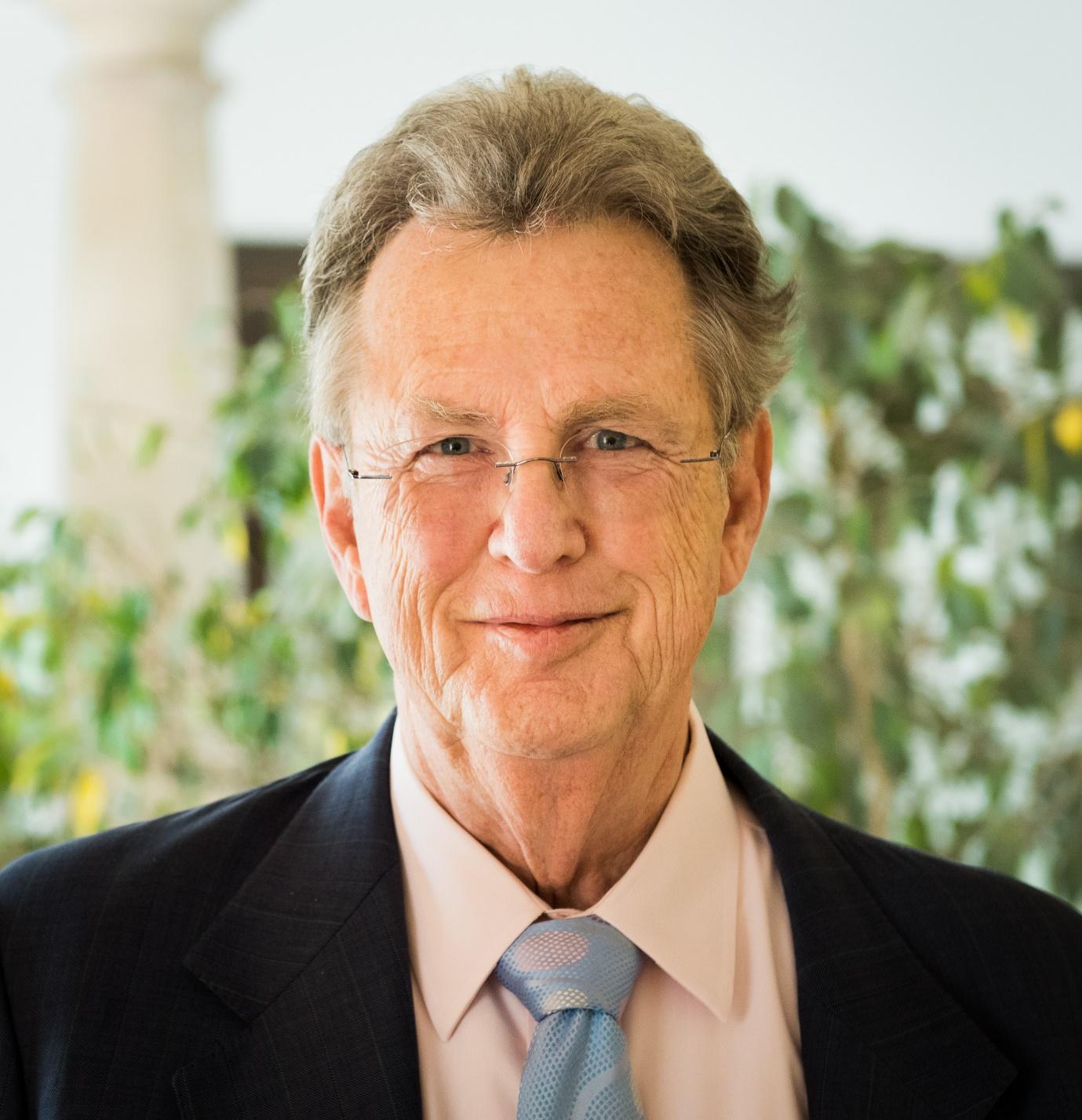 Marbella: Why is it Such a Special Place?

Why is Marbella so famous? What has turned this small town into a world-famous city? What makes it so valuable in the eyes of tourism and foreign investment? We bring you 5 reasons that -of course- are not the only ones but that -in our opinion- are the ones that mainly turn Marbella into a city of great interest, which receives an average of half a million tourists a year.

It has a privileged temperature. What this city is most famous for is its so-called microclimate, which allows its temperatures to be mild throughout the year. That is to say, it is neither stiflingly hot in summer nor excessively cold in winter. In fact, the average annual temperature in Marbella is 17.8º. A climatological blessing, which makes it a very appreciated place by all.

Marbella is framed by the sea and the mountains. This extraordinary orography allows the city to present a natural unevenness, making it possible that sea and mountain can be observed from any point of the city. In addition, these mountains and the aforementioned unevenness are what give it that extraordinary microclimate we mentioned in the previous point. 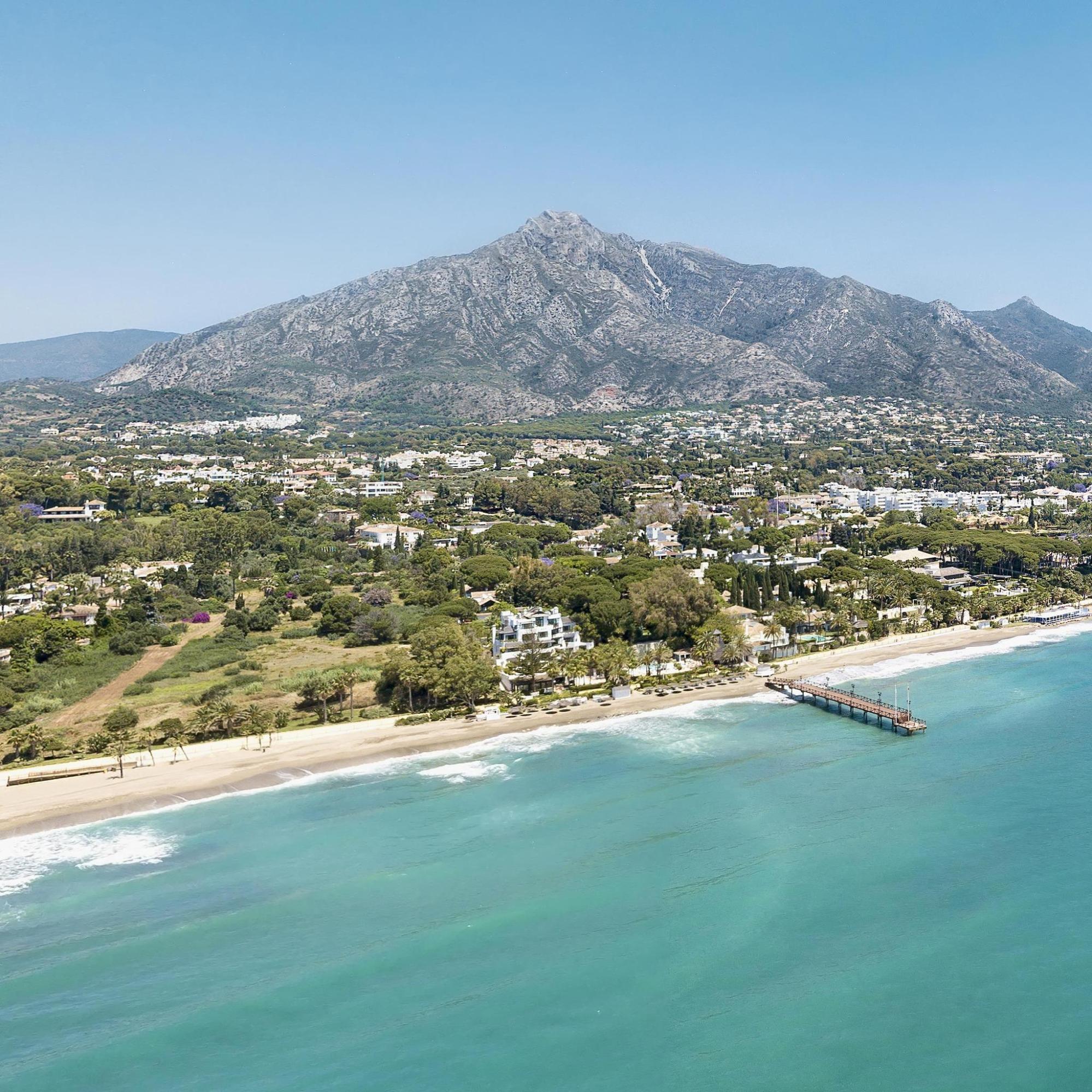 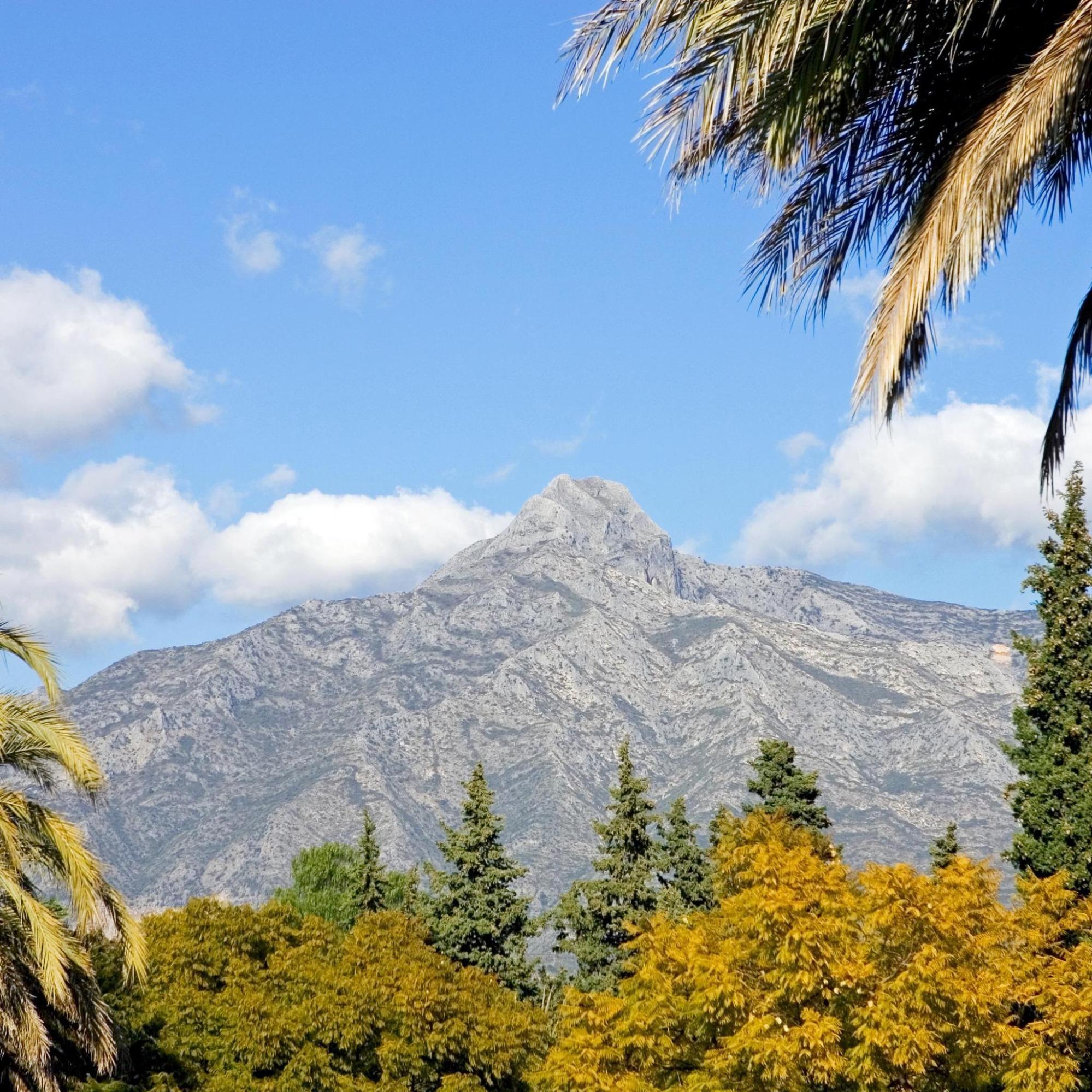 Since the ’50s, Marbella became a fashionable city for leisure, thanks to famous personalities who chose it and proclaimed its goodness all over the world. Influential people such as José Banús -which gives its name to the famous port-, Jose Antonio Girón or Prince Alfonso de Hohenlohe. 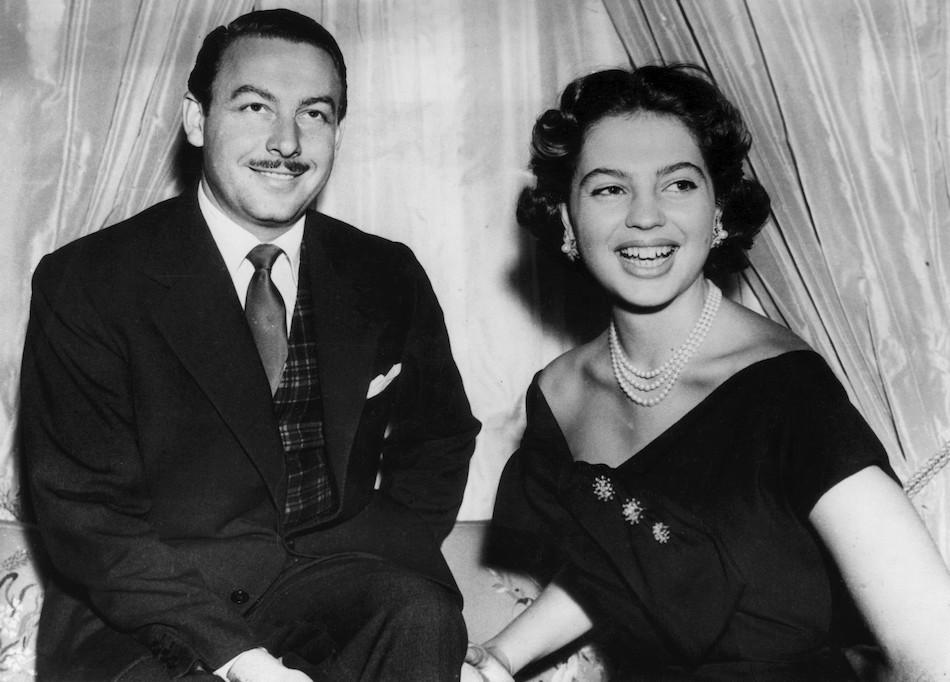 They were followed by many other prestigious families of the time such as the Bismark, Mora and Aragon or the Thyssen-Bornemisza. At this time began its universal fame, thanks to the visits of the jet-set, ie: the most famous, handsome and rich of the moment.

Have we mentioned that Marbella has 27 kilometres of beach? Distributed among 24 different beach games, beaches that are linked to the town allows residents and visitors to enjoy an unbeatable coastline and be very close to virtually anywhere in the city. In addition, this mild climate allows you to enjoy the beach during many days of the year.

How could we forget about the luxury port of Puerto Banús, the fourth Marina in the World Ranking for the price of berthing? Luxury, leisure and grandeur have always been linked to this tourist enclave, where many make ostentation before the surprised eyes of the many visitors. Its sophisticated structure is due to architect Noldi Schreck, who also collaborated in the creation of Beverly Hills. 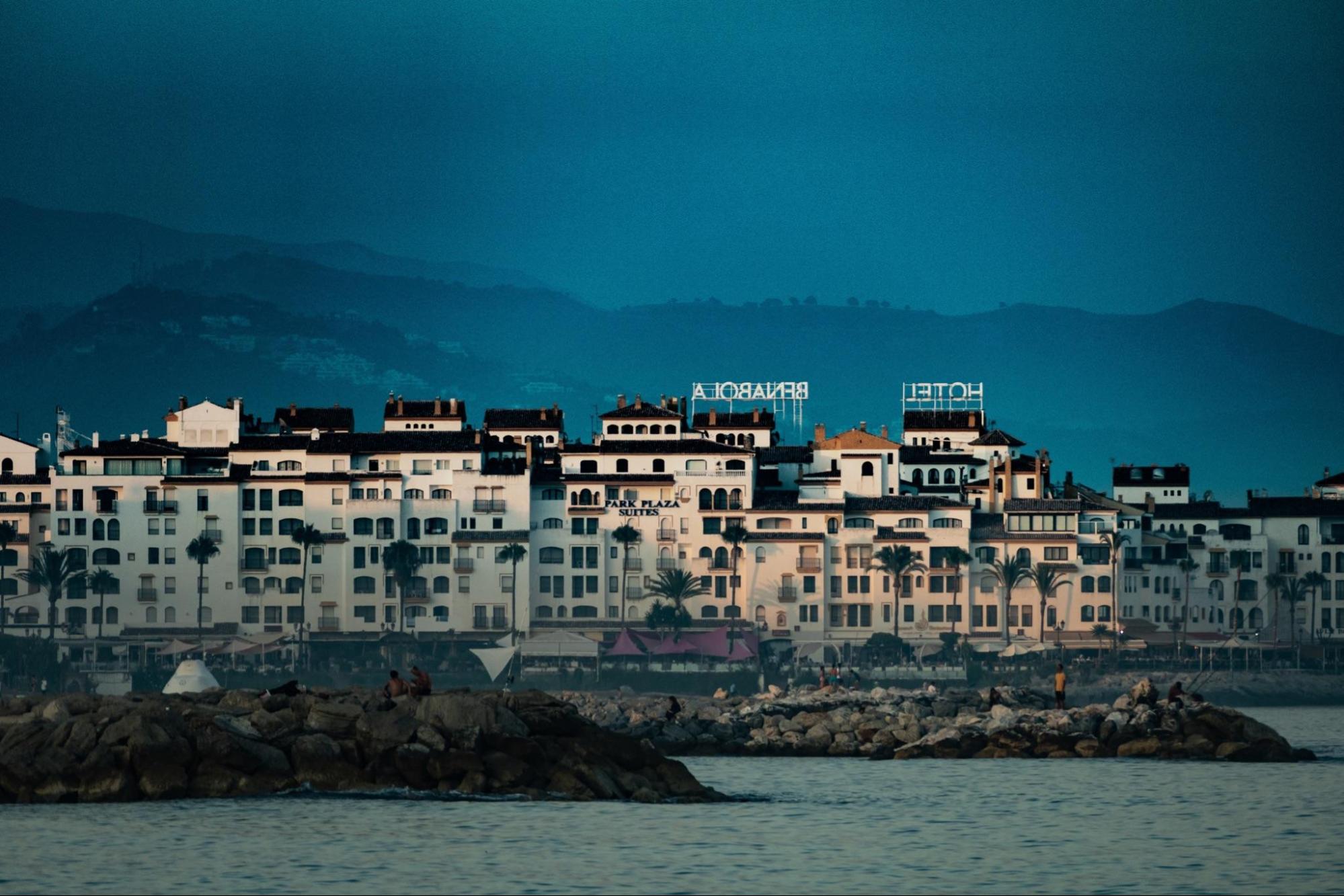 Where Panorama All Began

Amidst such a fabulously bustling area such as Marbella, Panorama saw a fantastic opportunity. Since becoming the first international real estate agency located in the city in 1970, the company has been an exceptional witness to the evolution of Marbella and the Costa del Sol.

For the past 25 years Panorama’s offices have been located on the Golden Mile, inside the Puente Romano Hotel and opposite the Marbella Club Hotel, “a strategic location in the heart of Marbella’s ultra-prime area”.

Panorama broke new ground with innovative practices such as sponsoring inspection flights to the coast or promoting open houses. Clover’s children, Alex and Katinka, have subsequently joined the management of the company, sharing their passion and dedication to forging lasting partnerships with their clients.

To celebrate 50 years of leading a very competitive and constantly evolving environment, Panorama has renovated its sales offices at Puente Romano as a way of giving back to its dear clients who have relied on their experience and know-how when buying or selling a property.

Panorama’s comprehensive knowledge of the luxury property market and top-quality service has enabled the family-owned and run company headed and managed by Christopher Clover to become a benchmark in the sector, making it an integral part of Marbella’s history over the past half-century.

This important milestone was recognised by the mayor of the city herself, Ángeles Muñoz, who with her presence at the inauguration of the refurbished facilities wanted to demonstrate her commitment and support for one of the most important economic sectors of the Costa del Sol.

“For Marbella is proud to have Panorama Properties, Christopher Clover and his children, because after 50 years they have made it possible for the name of Marbella to be associated with concepts such as prestige and professionalism,” said the mayoress during her visit to the offices. 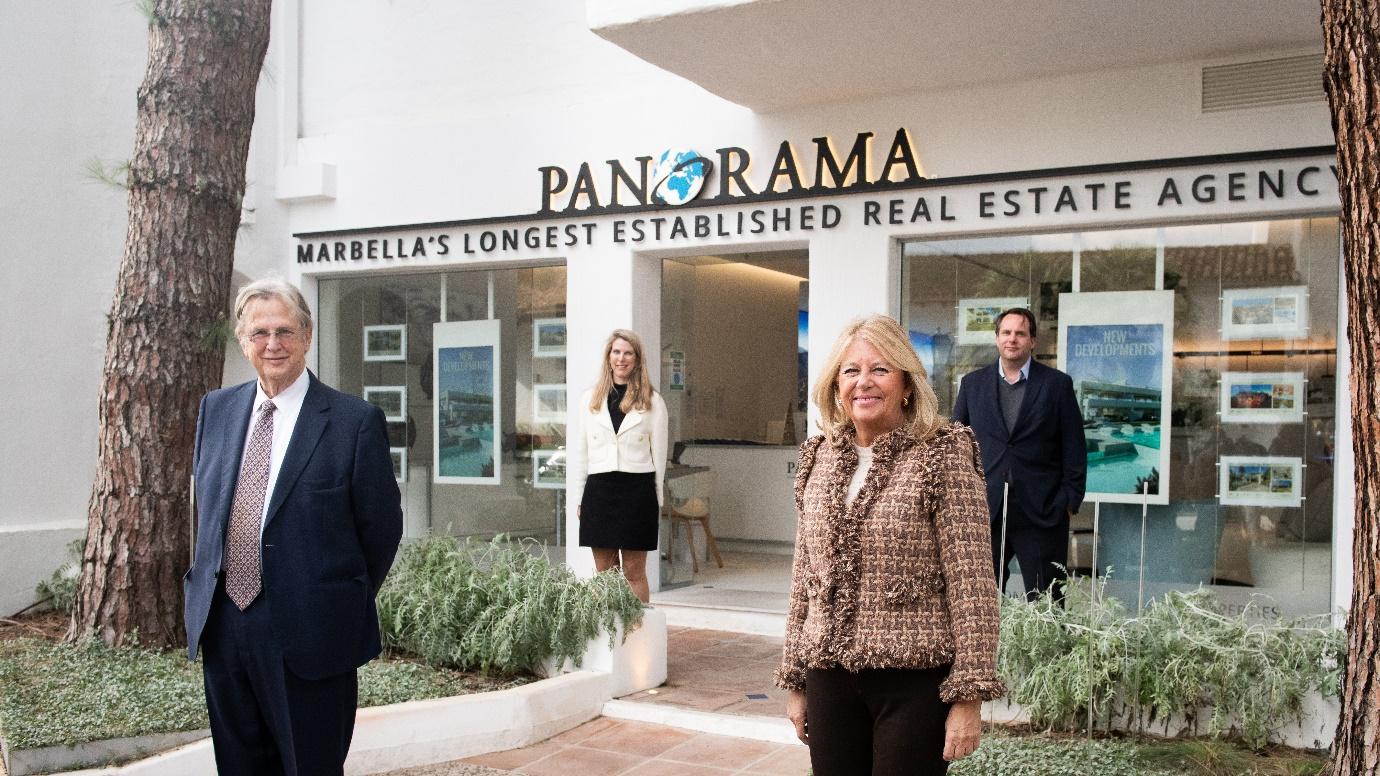 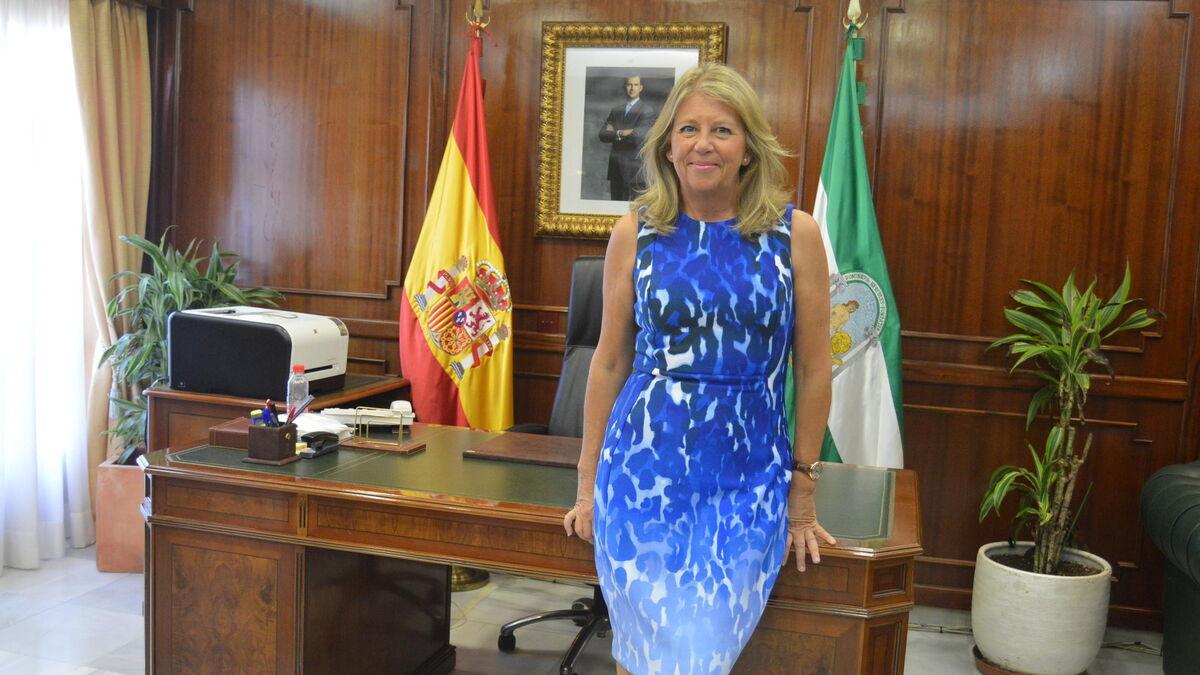 In 2004, Panorama launched its magazine “The Marbella Property Magazine”. In addition to the renowned market report written by Christopher Clover, it contains other interesting articles for both buyers and sellers as well as an excellent selection of properties.

In 2015, Christopher Clover was appointed Eminent Fellow by the prestigious Royal Institution of Chartered Surveyors (RICS), the largest and most prestigious organization of real estate professionals worldwide since 1868. And in 2016, Panorama’s CEO was awarded the Lifetime Achievement Award by the REAS association. 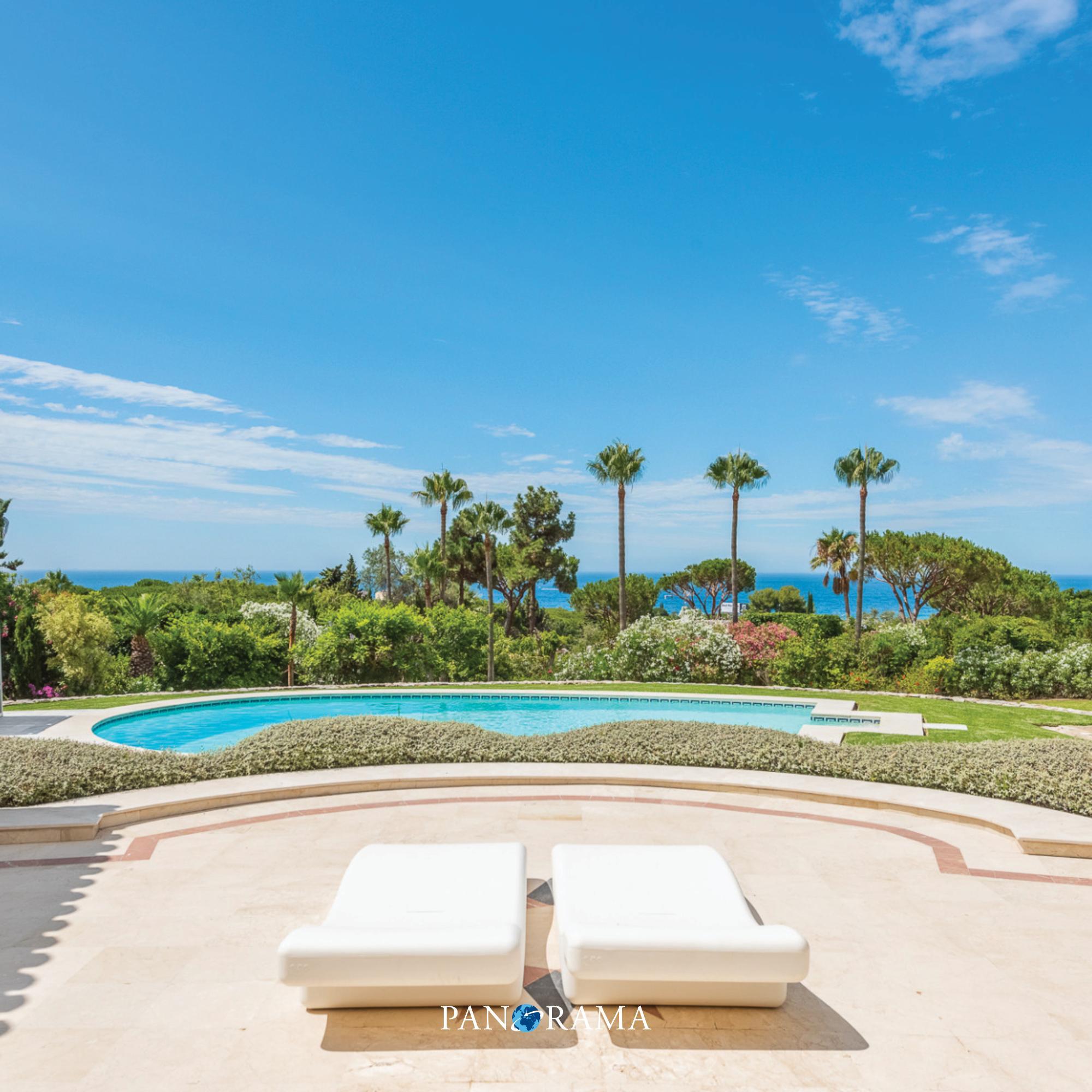 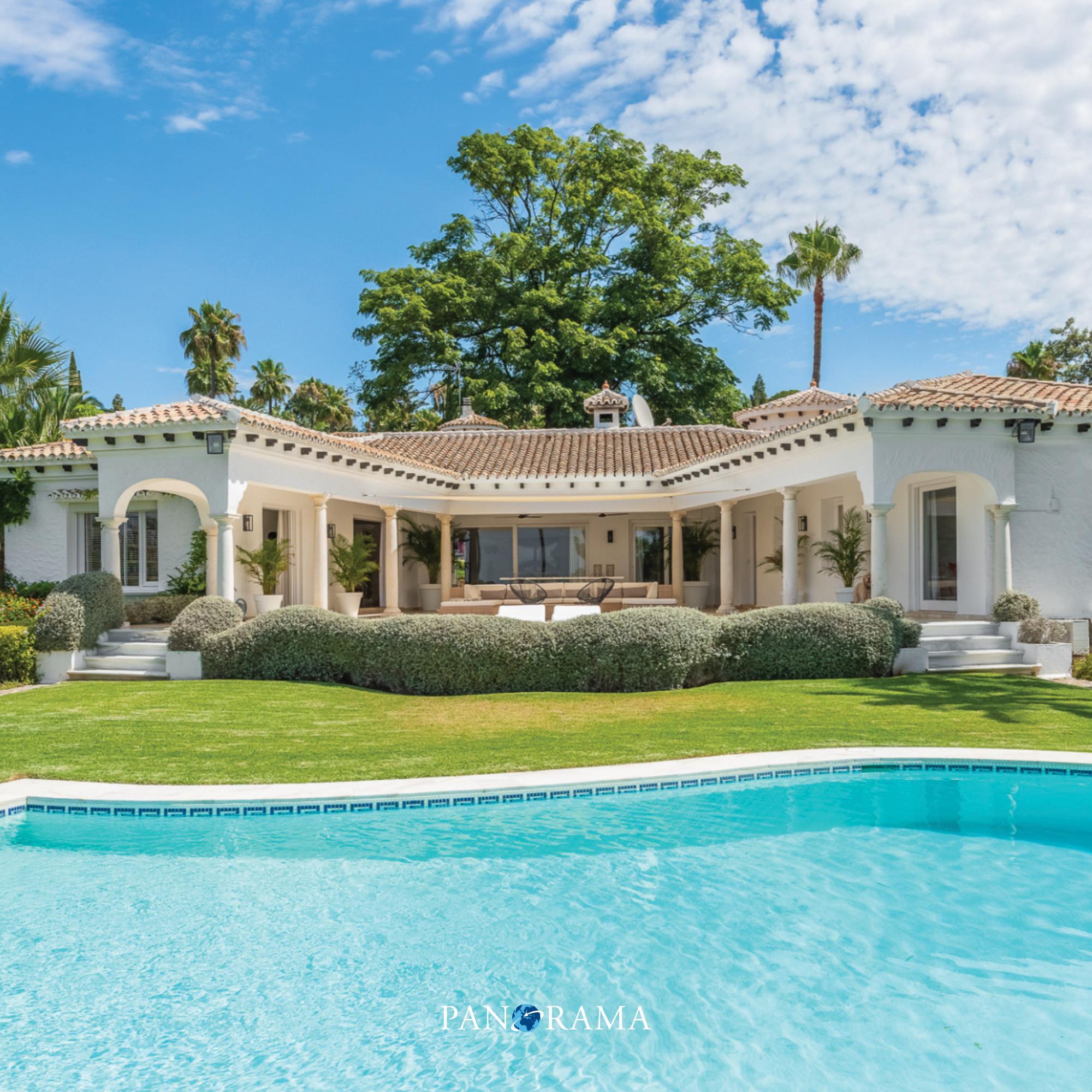 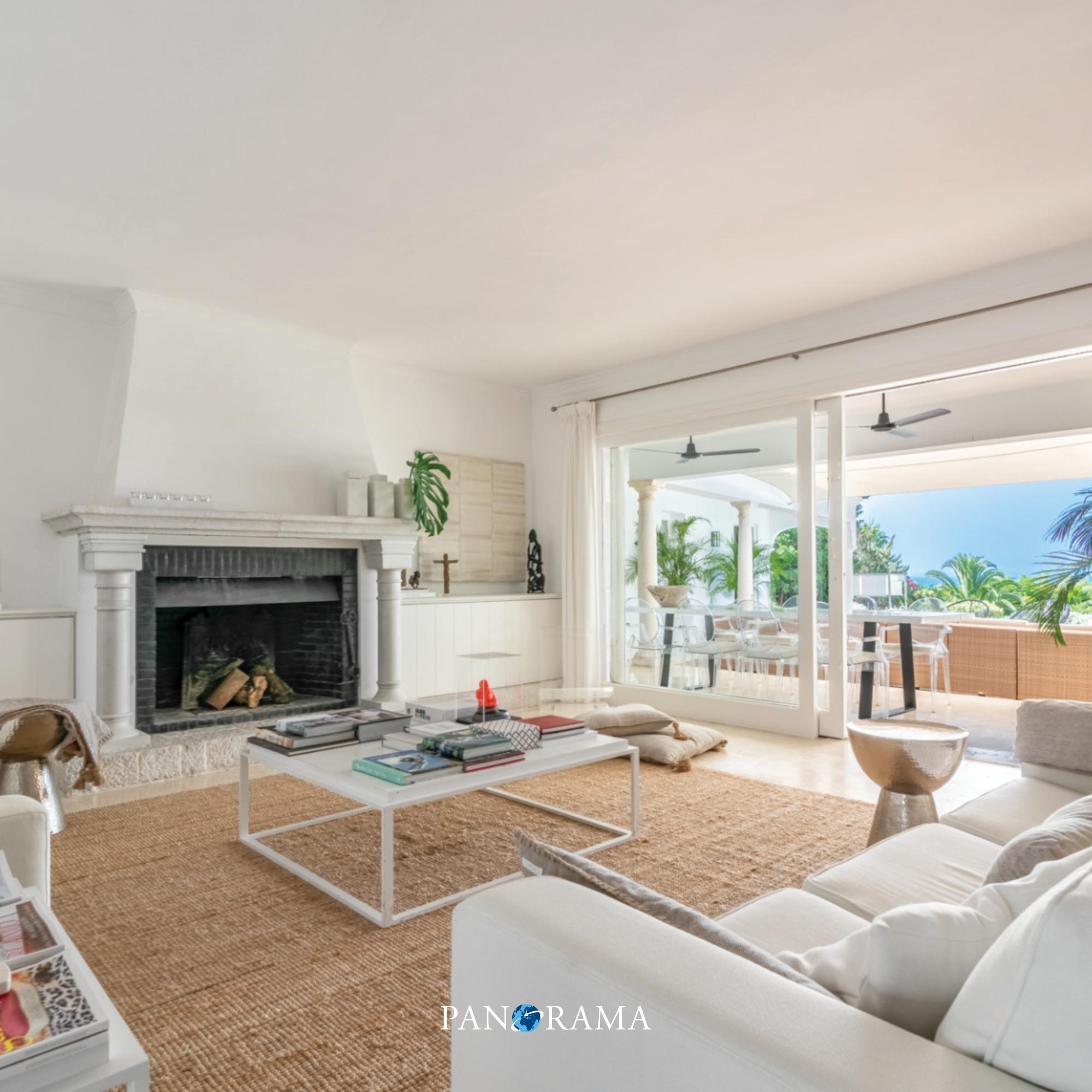 Hotel Local 23 (next to Nobu reception)

(opposite the Marbella Club Hotel, on the upper level)