Las Fallas: The Valencian Tradition that Has to Be Seen to Be Believed

The Fallas in Valencia is the most important celebration in the city of Valencia, which includes exciting activities for all the family. 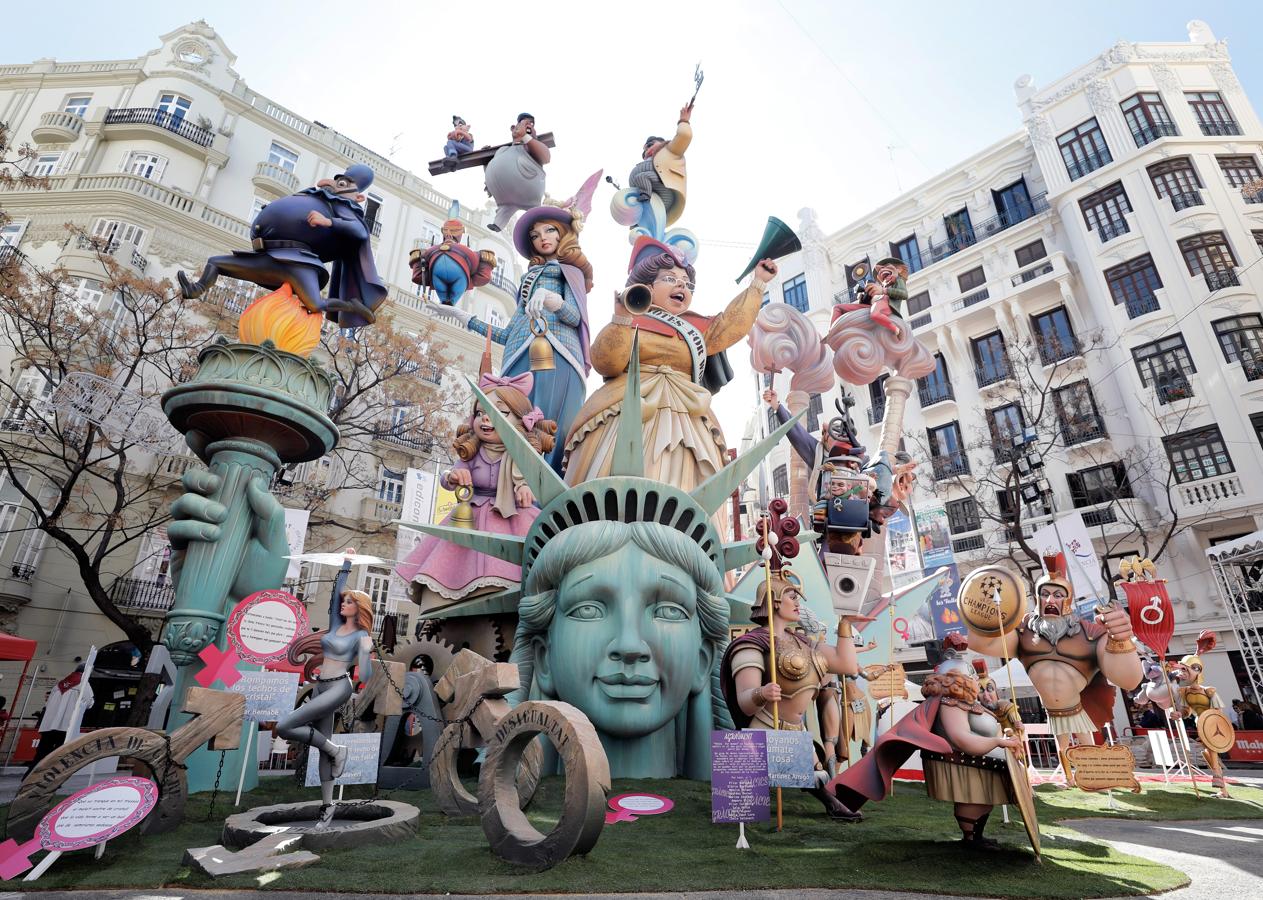 The first festival in honour of gunpowder and fire, the Valencian festival of Valencia is an exhilarating experience that you have to witness at least once. Las Fallas can best be summed up by fireworks, noise, and a lot of gunpowder.

Between the firecrackers, fireworks, and mascletás, the festival is one of the noisiest and most popular in all of Spain. Commencing on the 19th of March every year, there are many things to see and do in this extravagant and over the top festival.

What are Las Fallas?

Valencia is considered a relatively quiet city with a population of around 800,000, which doubles size when more than a million fire lovers come to celebrate Las Fallas.

The festival lasts five days, from 15 March to 19 March, but the atmosphere begins to smell of fiesta weeks beforehand. It starts on the 1st of March and ends on the 19th, at which time a show begins with the thunderous firecrackers that form the mascletá every day at 14.00 in the Plaza del Ayuntamiento, at the Town Hall square.

The ninot from 2019 at the Town Hall square

These firecrackers shake the ground for 10 minutes, as the mascletá is an auditory rather than a visual spectacle. But the most amazing firecrackers are set off between the 15th and 19th of March.

The festival really takes shape on 15 March, with La Plantà, when more than 700 huge ninots are placed all over the city and most of the streets are closed to traffic. In this way, the streets fill with people and activities during these days and nights of festivities.

For many, the main moment of Las Fallas is the creation and destruction of the ninots, which are large statues made of papier-mâché, cardboard, wood or gauze. The ninots are extremely realistic and usually depict satirical scenes or current events.

Many ninots tell several stories, so cranes are needed to move them into place in the squares, parks or intersections of Valencia. Many ninots are placed together so that the whole story can be seen in each falla. 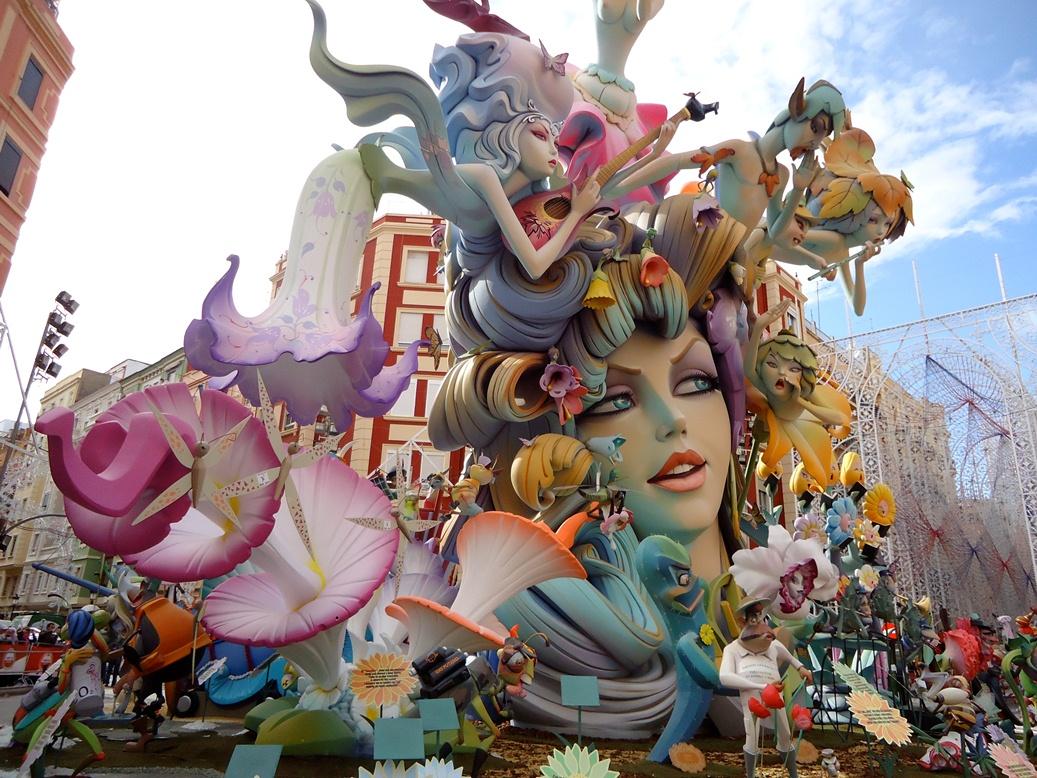 For the next few days, people can walk through the streets to admire the art and humour of these masterpieces and enjoy the traditional sweets sold on every street corner. For an even more intense local experience, try the classic bunyols de carabassa with a glass of chocolate.

The ninots are kept in place until they are burnt on 19 March, and the day is known as La Cremà (the Burning). Every year, one of the ninots is saved from destruction by popular vote. This is called “pardoning” a ninot, and it goes on display in the Local Fallas Museum along with the rest of the pardoned ninots from other years. Some of the structures are so beautiful, that it’s hard to believe that they’re meant to be burned. 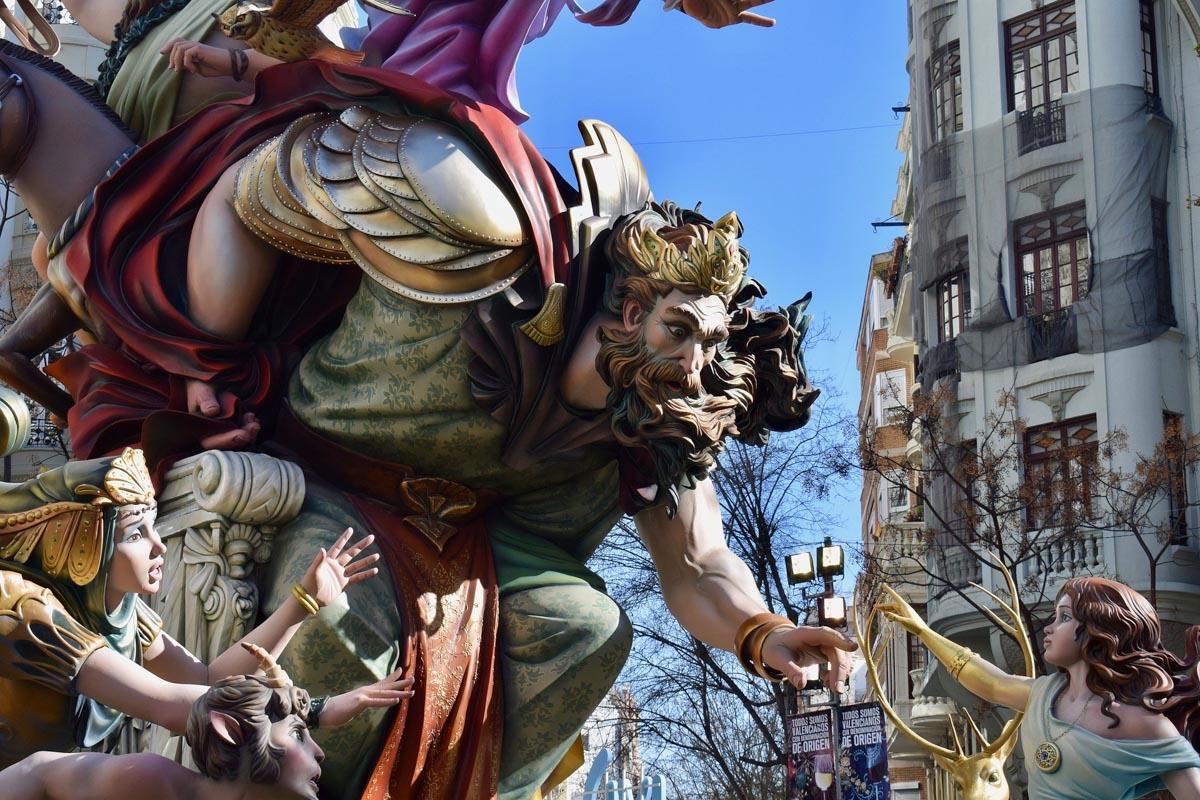 In addition to the daily firecrackers and the burning of the ninots, there are many other events that are also part of Las Fallas. People who go to the city can enjoy an extensive list of bullfights, concerts, parades, paella competitions, floral offerings and beauty pageants all over the city.

Festivities that Can’t Be Missed

A mascleta is a series of loud explosives (known as masclets, hence the name) with a certain power that is fired continuously with the basic purpose of producing noise, with rhythm.

This is a pyrotechnic display characterised by its noisy and rhythmic composition and normally takes place during the daytime. The deafening noise already starts to rumble through the main streets of the capital of Turia in February.

If you’ve never been to a mascletá, Valencia offers one of the best, every day in the Plaza del Ayuntamiento: we promise you’ll be left open-mouthed for a long time. Reason enough to make it one of your travel destinations in March. 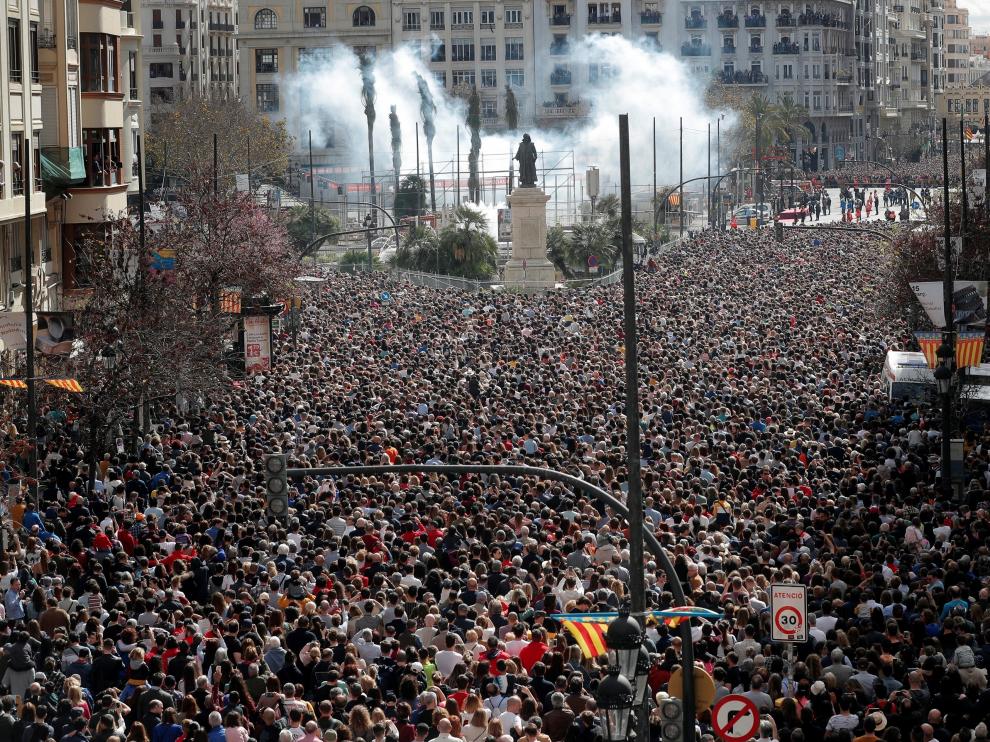 Spectators watching a mascleta at Fallas, in the Plaza del Ayuntamiento

One of the high-selling points of Las Fallas is the Cremà de las Fallas, the moment when they all burn and which takes place on the aforementioned night of 19 March. The night before is marked by the Nit del Foc, or Night of Fire, which is celebrated with a spectacular fireworks display that marks the beginning of the end of the festivities.

The event organisers spare no expense, and the pyrotechnic display is sure to leave you speechless. The best places to catch the fireworks are at the Puente Real, and Puente de Aragón. 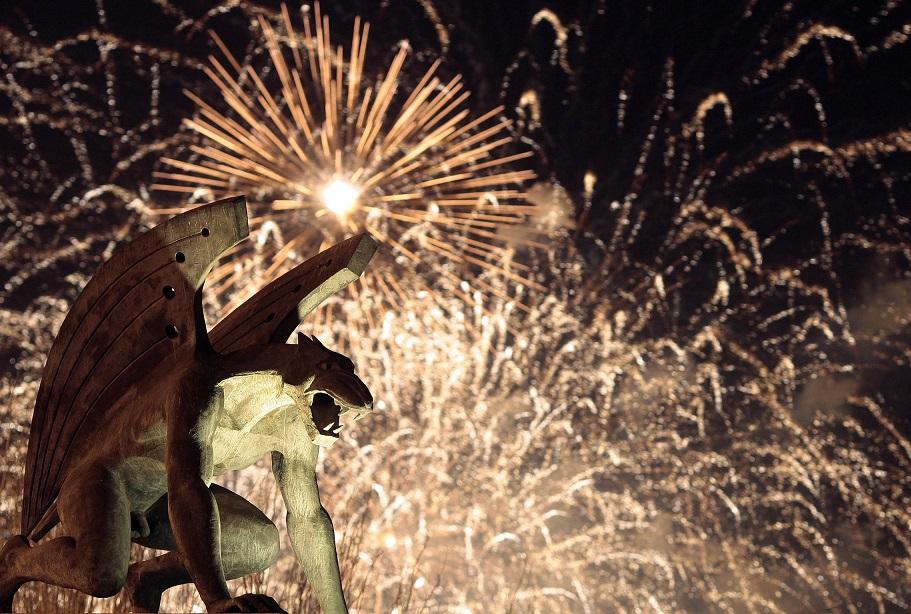 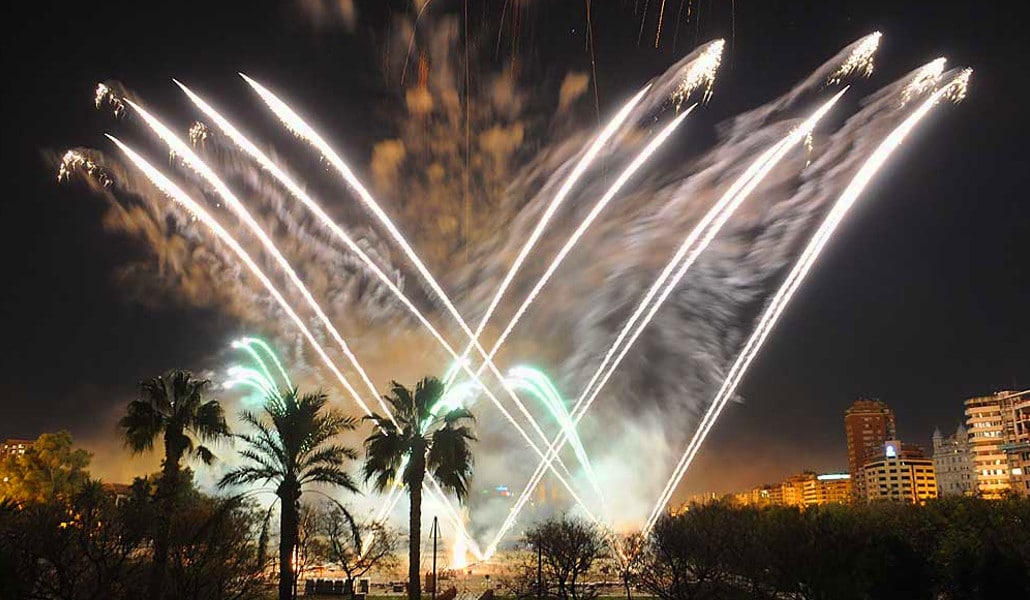 At night, the neighbourhoods come alive with the rhythmic beats of live music with talented local artists covering Spanish music as well as international hits until the early hours of the morning. Follow the rhythm of the music to find one of the many street concerts where you can dance until dawn. There is something to suit everyone’s tastes, as well as many stages with DJ’s playing electronic music. 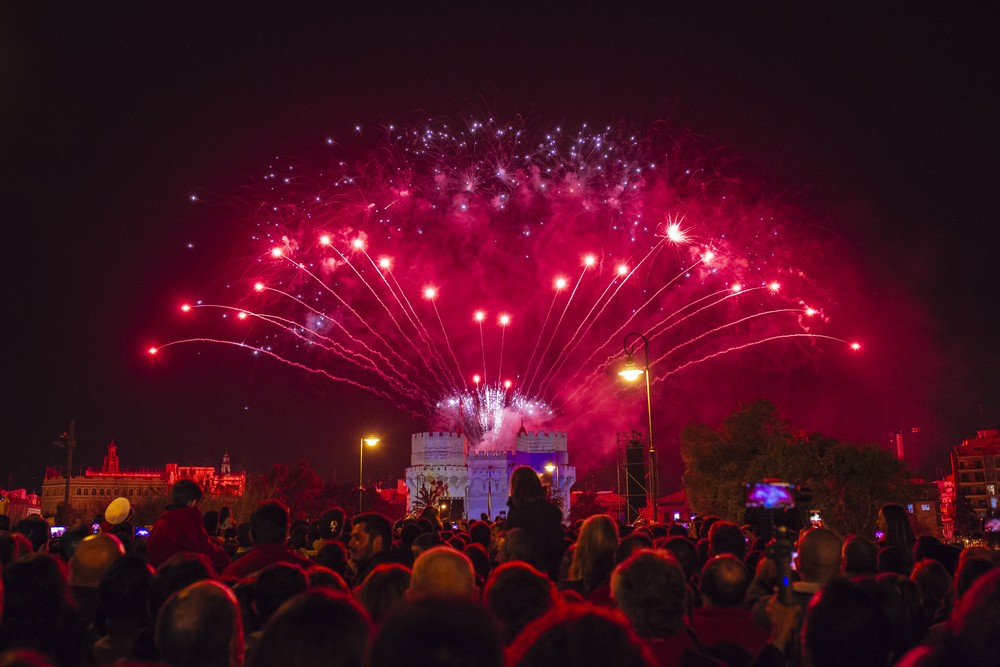 If you’re thinking about visiting Valencia during the festival, don’t miss these essential activities to experience the Fallas in Valencia like a true Valencian.

Previous articleThe Valley of the Fallen: Inside Spain’s Most Controversial Monument
Next article10 Autumn and Winter Fashion Trends in Spain this 2021