The small and walkable city in Spain’s region of Andalusia is a delightful weekend trip option for travellers. 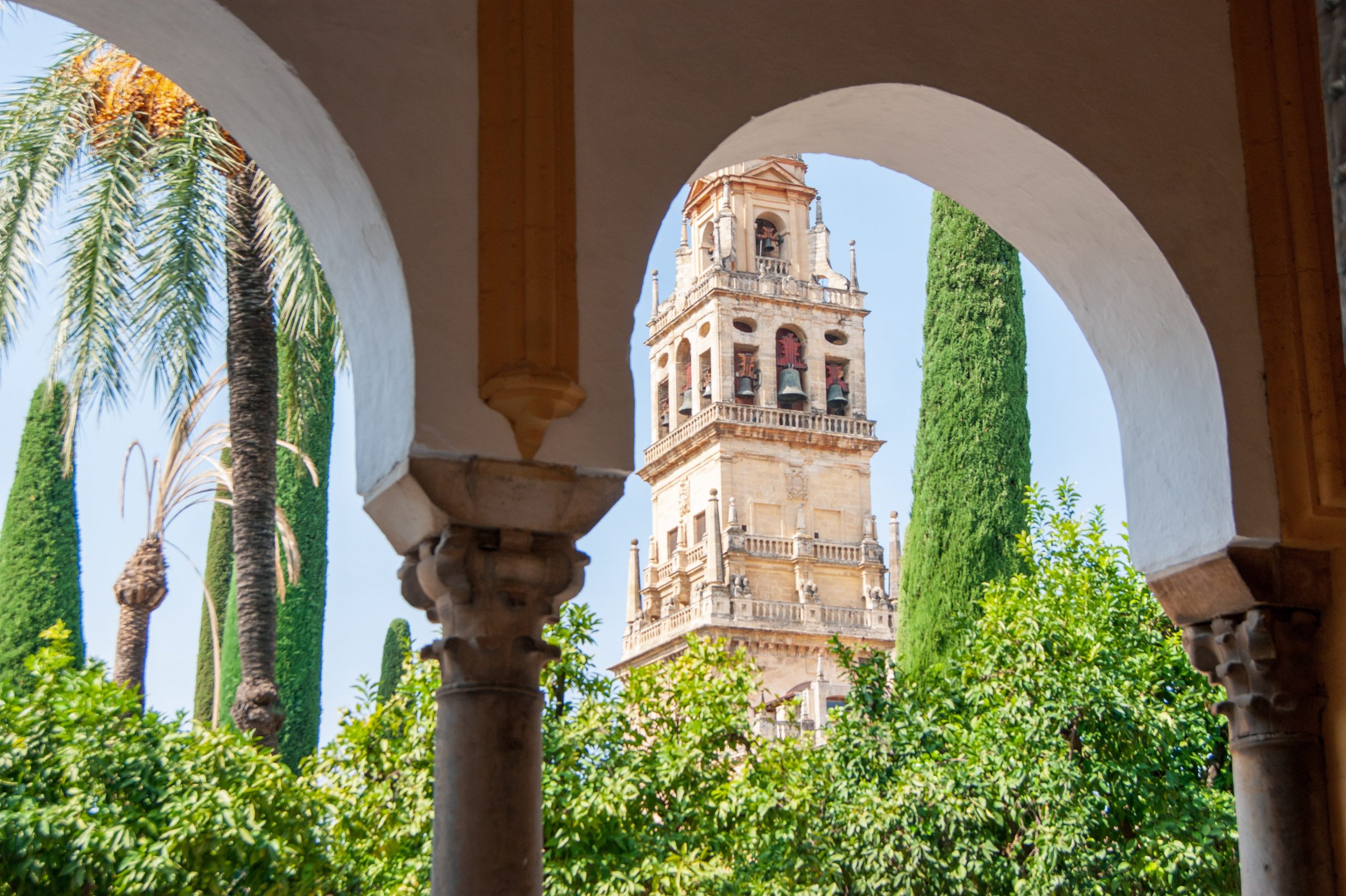 This compact city has everything you need for an exciting weekend getaway in Andalusia, it’s no wonder that Córdoba was named the greatest city in western Europe in the 10th century.

Full of history and culture, Córdoba is home to both Roman and Islamic influences, wrapped in the Spanish tradition. It’s one of our favourite cities in Spain for its quaint and narrow streets, bustling squares, intimate tapas bars and bright white-washed streets.

Also, we bet you didn’t know that the charming city of Córdoba is home to more UNESCO World Heritage sites than any other city on Earth? Let’s find out why by taking a look at our recommended weekend itinerary:

Venturing the Old Town of Córdoba

We suggest getting an early morning start to be able to get free entry Mezquita-Catedral de Córdoba between 08:30 and 09:30 every day (except for Sunday). This mosque-cathedral is undoubtedly the city’s most stand-out and emblematic monument.

Now considered one of the most beautiful examples of Islamic art and architecture in Spain, it was built in 785 on top of the ruins of a church by a Muslim emir. Over the years, it’s been added onto and embellished, with endless columns, arcades with intricate patterns.

The stunning mixture of Christian and Muslim iconography is what makes it one of the most compelling structures you’re bound to visit. 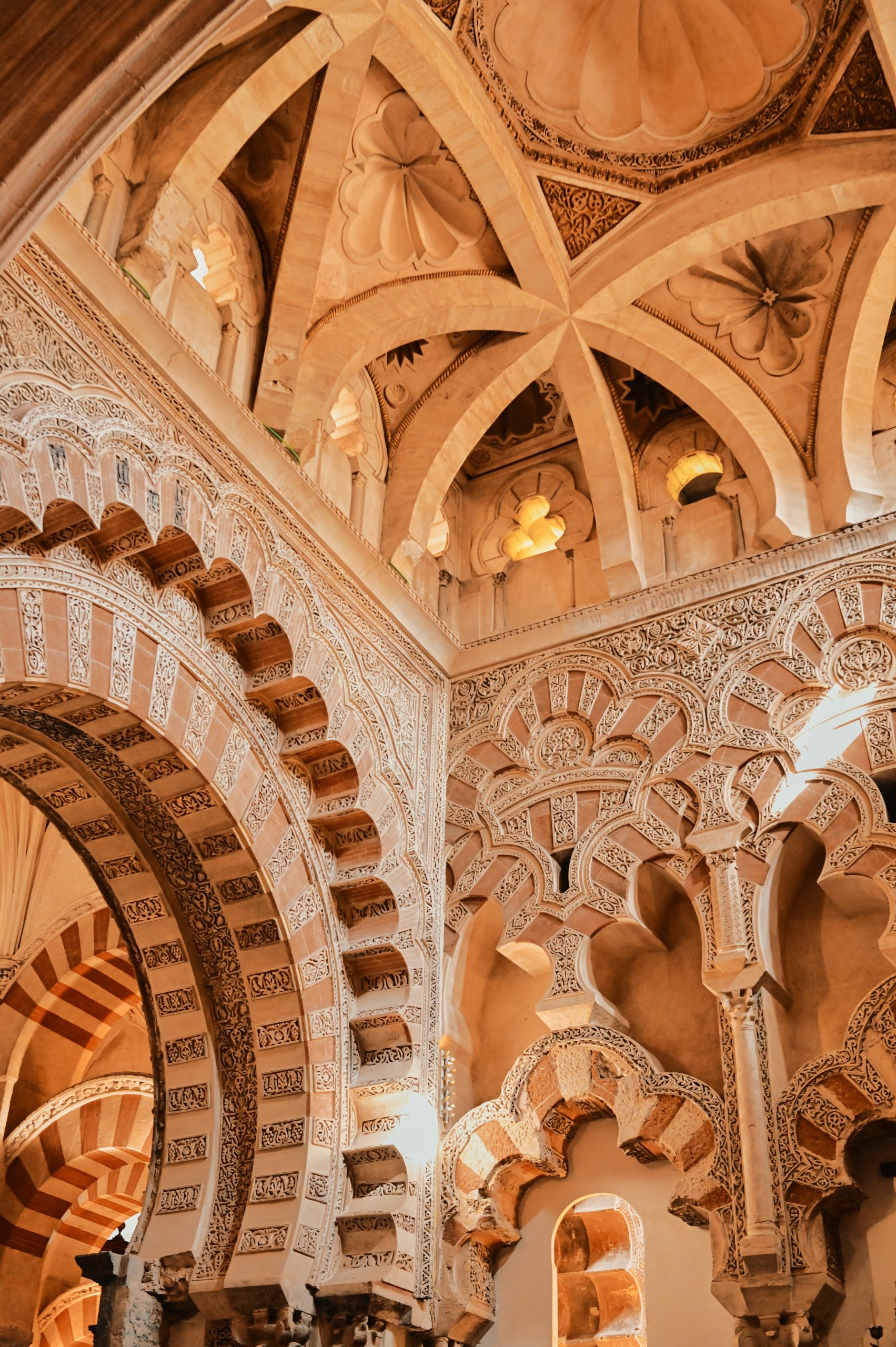 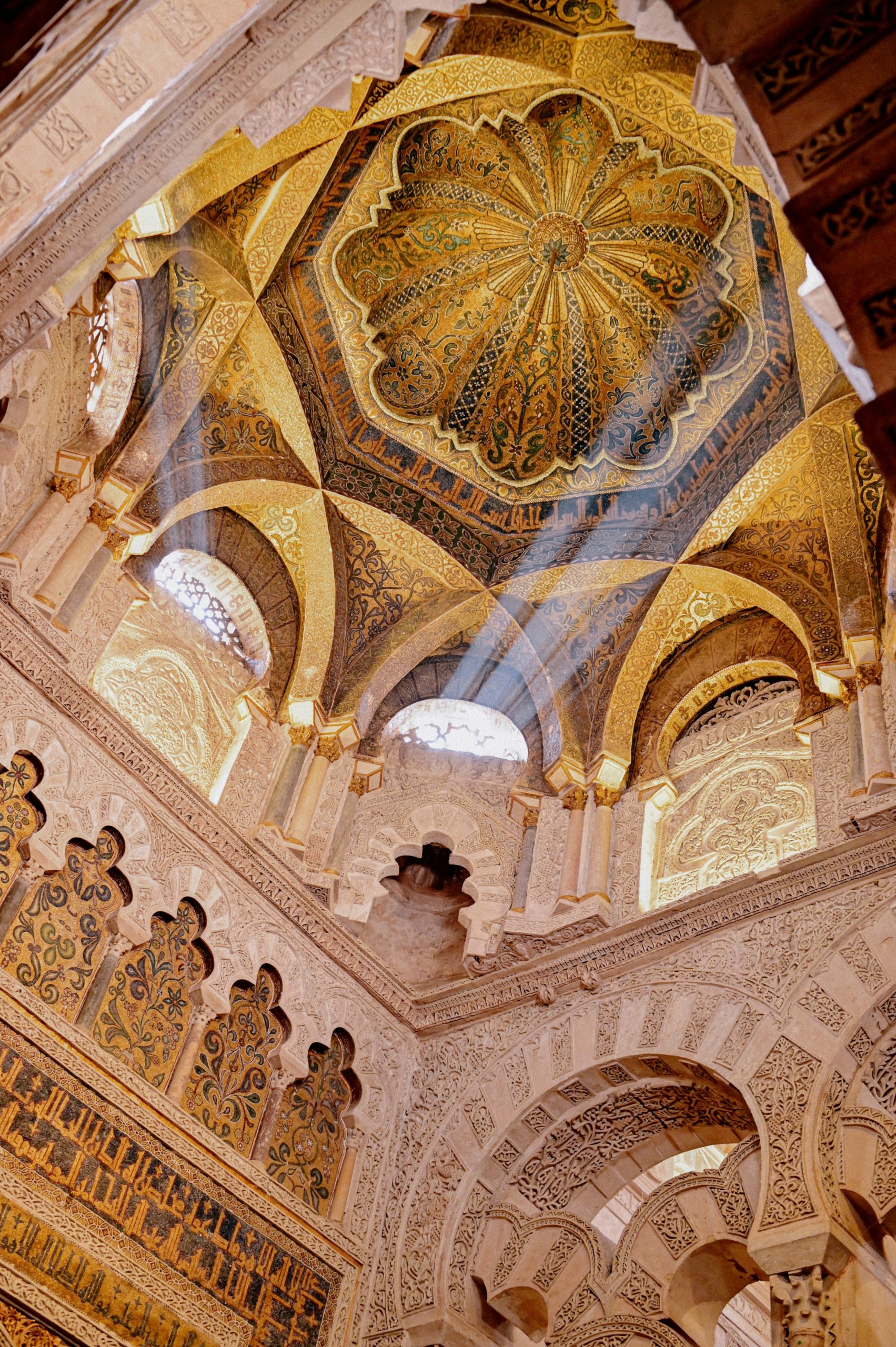 Inside the Mosque / Cathedral of Córdoba, Spain

We recommend strolling across the Puente Romano to get maximum views of the whole city. Originally built in the first century B.C, the Roman Bridge spans the Guadalquivir River that flows through the city.

The bridge contains the famous Moorish style arches that are seen across Córdoba. Unfortunately, only a few arches remain intact due to many restorations over the years. At the end of the bridge, you can savour the sight of the Islamic Calahorra Tower at the end. 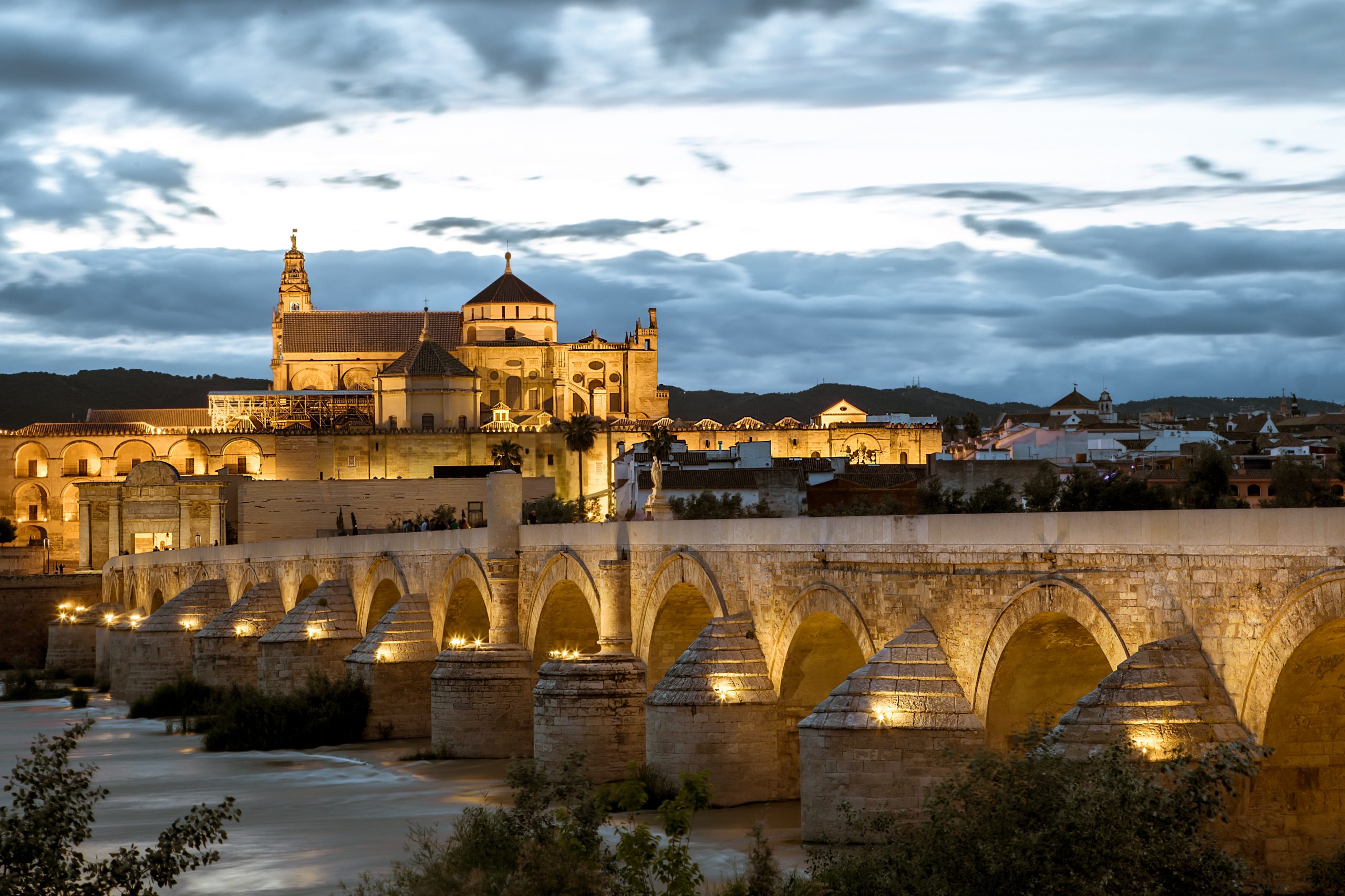 No trip to Córdoba would be complete without eating a traditional Andalusian style lunch al fresco style. After checking out the mosque and the roman bridge, we recommend heading to Puerta Sevilla, a restaurant that takes up an excellent spot in the square inside the Sevilla Gate. Remember that portions in Andalusia tend to be more generous than in other parts of Spain, so we suggest that you order a few tapas between yourselves. 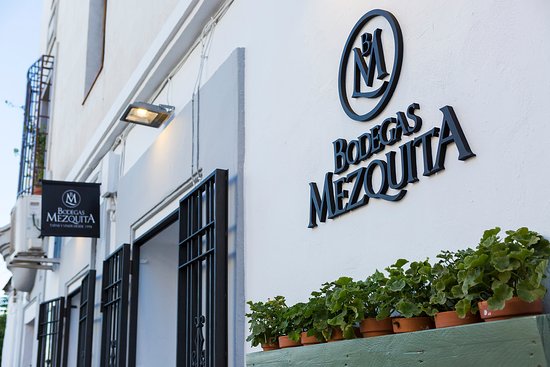 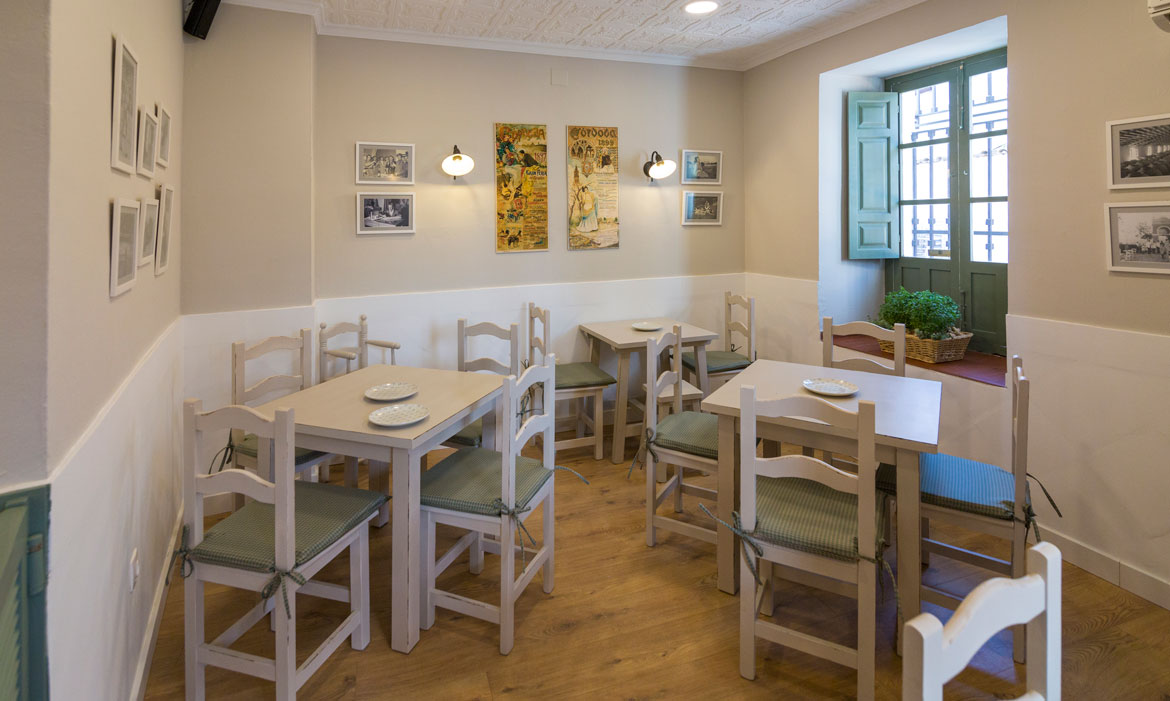 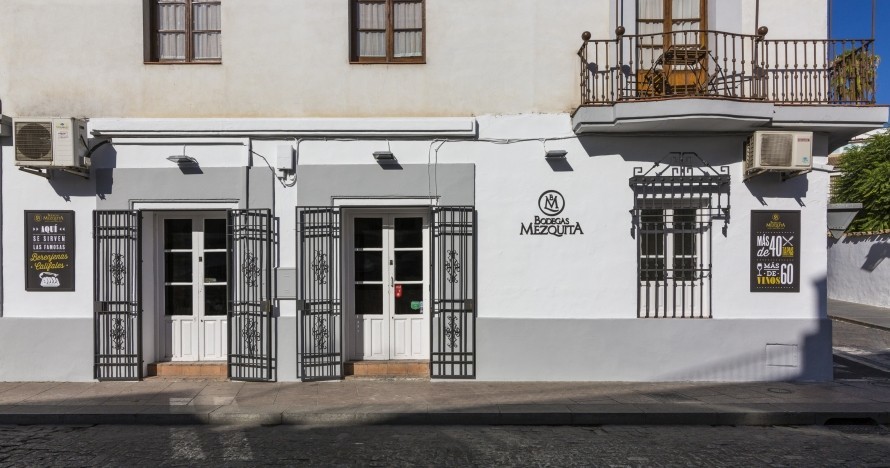 Another must-see monument of this historic city is the “Alcázar of the Christian Kings”. Once used as a residence for the Catholic monarchs, it was also the headquarters of the Holy Office during the inquisition, and it was also converted into a prison.

Start your tour by climbing into one of the Alcazar’s four impressive towers, and as you reach the top of the ramparts you’ll be able to enjoy a breathtaking panoramic view of the city.

On your descent, make sure to visit the inside of the Alcazar of Córdoba, as it features a beautiful mosaic salon with baths and a patio fit for kings. There, you’ll also find large paths lined with orange trees, streaming fountains and ponds in the centre of the exquisite gardens.

Coming here is the perfect opportunity to take a break from all the walking, relax, and breathe in the delicious orange scents and take a breather. 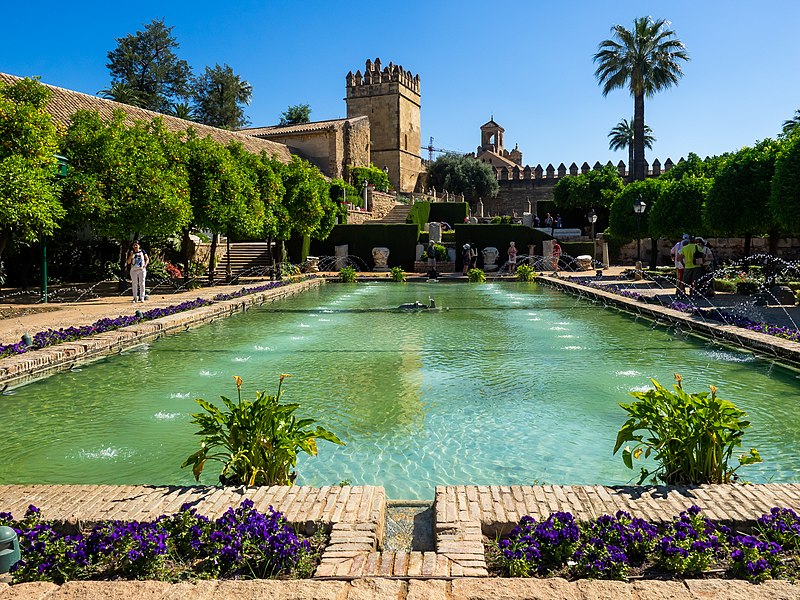 Best Time to Go To Córdoba

Córdoba is in Andalucia, where temperatures are known to reach a stifling 40 degrees in peak summer times. Unless you want to spend your trip sweltering from the heat, we reckon it’s best to avoid going between June to September.

We recommend going between March and May when it’s not too hot but the weather is nice enough to be outdoors and spend the day walking and exploring.

Previous articleWhy You Should Visit Tenerife at Any Time of the Year
Next articleElys Relocations: Making Your Move to Spain Swift and Efficient