Get to Know Valencia for its Must-See Architecture

Let’s take a spin around the Mediterranean community that best represent Valencia’s architectural treasures that best define each of the provinces and represent their heritage. 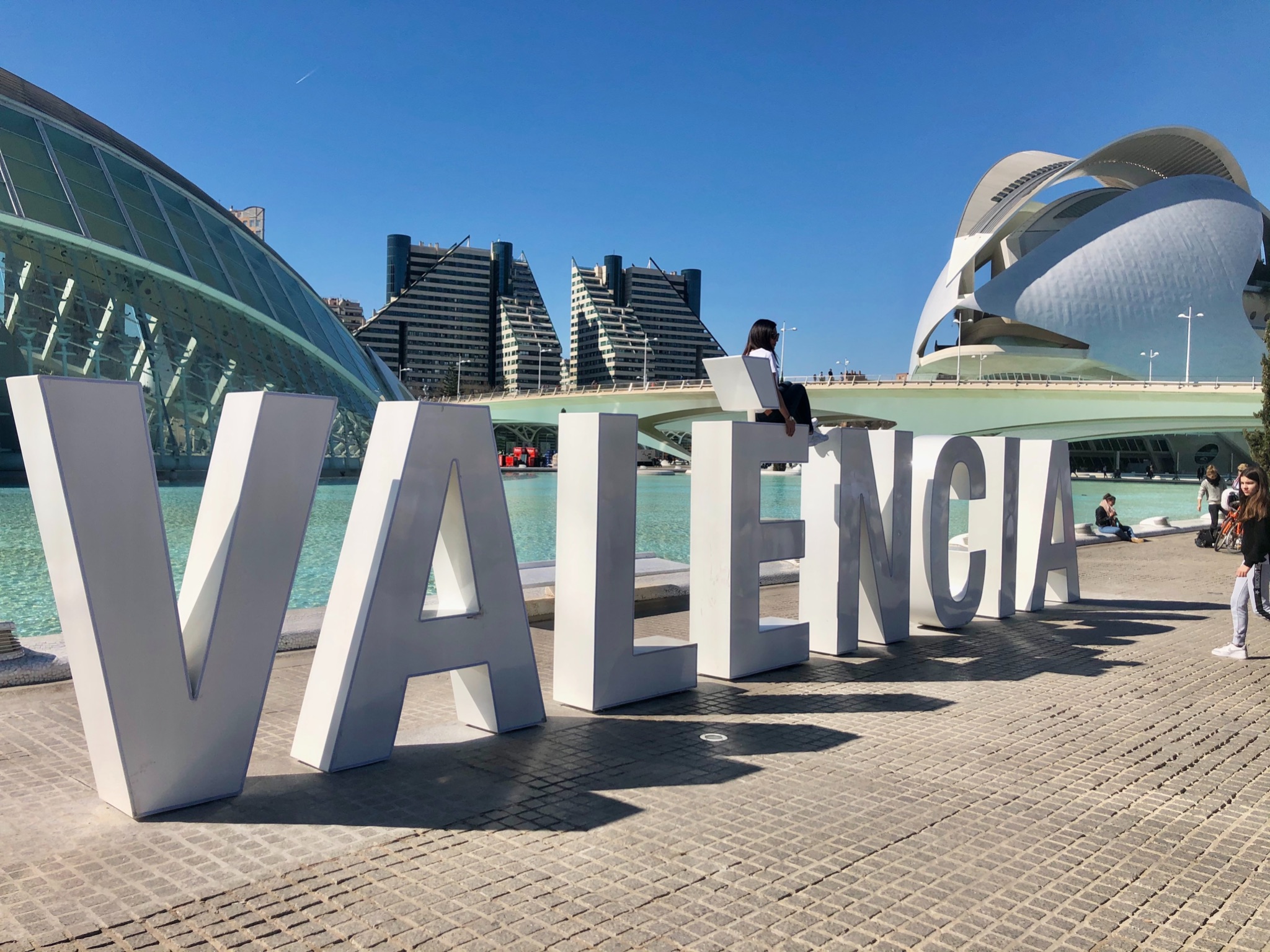 Valencia is a special city whose architecture fascinates many. The capital of Turia is one of the richest cities, architecturally speaking, in the country of Spain. It’s easy to trace the history of Spanish architecture through the Valencian stones, just as it is easy to walk through the history of the city by visiting its buildings from the centre to the outskirts, from Ciutat Vella to La Malvarrosa via Patráix.

Valencia’s buildings represent a rich historical past based on the exchange of products and commercial activities, the modernity and culture of its people and the most Mediterranean modernity.

If you have been living in Valencia for some time, you will already know that the capital of the Túria is not only rice, Mediterranean sea and oranges. The city stands out for many other elements such as its architecture, which masterfully combines the traces of the past with the most avant-garde architecture.

Whether you are a lover of architecture or not, a stroll through the streets of the city will not leave you indifferent and you will discover everything from medieval constructions to the most innovative buildings.

An example of modernity and one of the most widespread photographs of the capital of the Túria in recent years is the characteristic Ciudad de las Artes y las Ciencias de Valencia. A complete architectural, cultural and entertainment complex that stands out for its pristine white, straight lines and the almost impossible shapes of its buildings.

As the work of Santiago Calatrava, it was inaugurated in 1998 with not a little criticism for how expensive it turned out to be in the end. The spectacular work captures the essence of Valencia in its buildings, combining a futuristic aesthetic. It also draws a clear allusion to the animal world with the shape of a whale skeleton in the 4,000 square metres that make up the three floors. 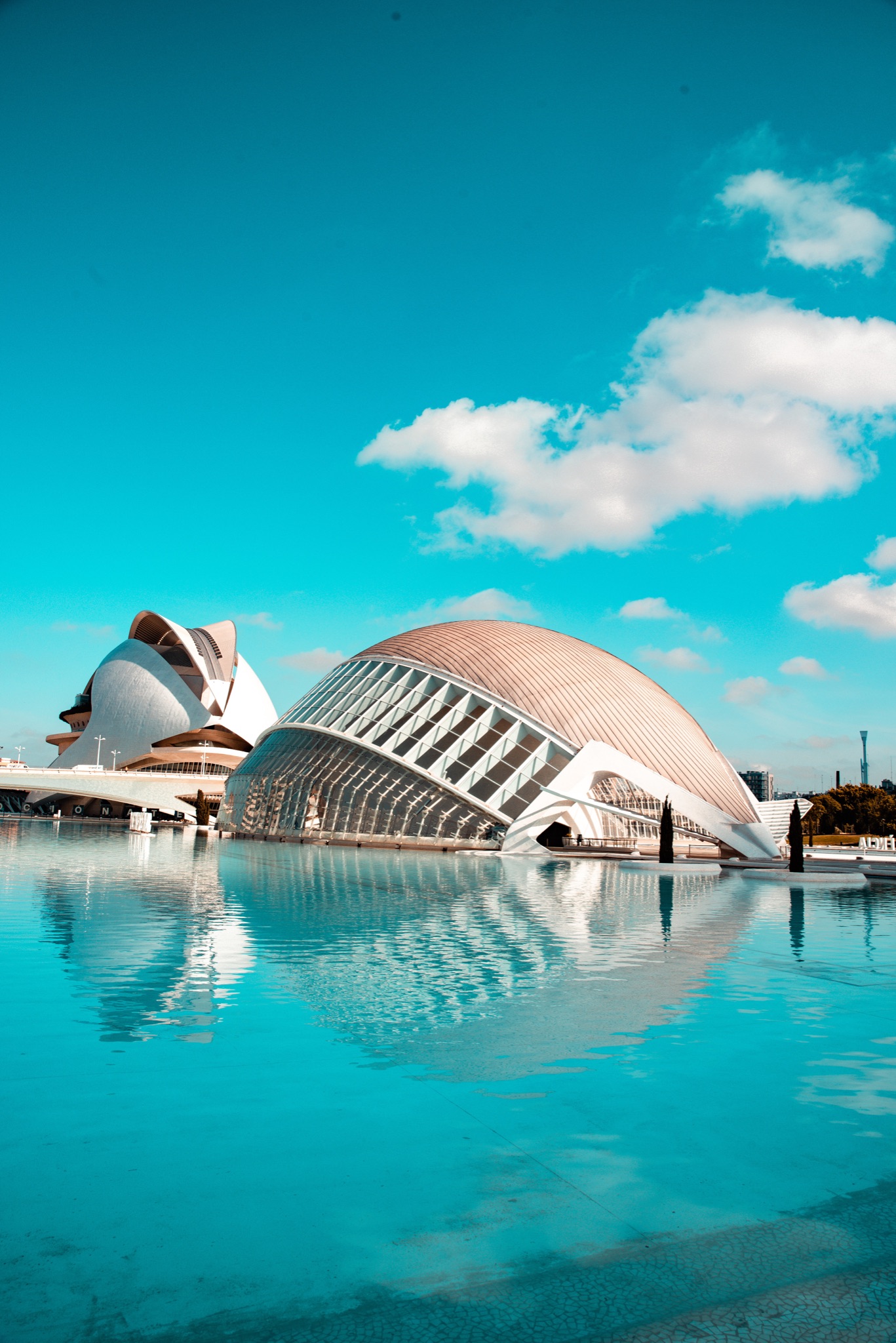 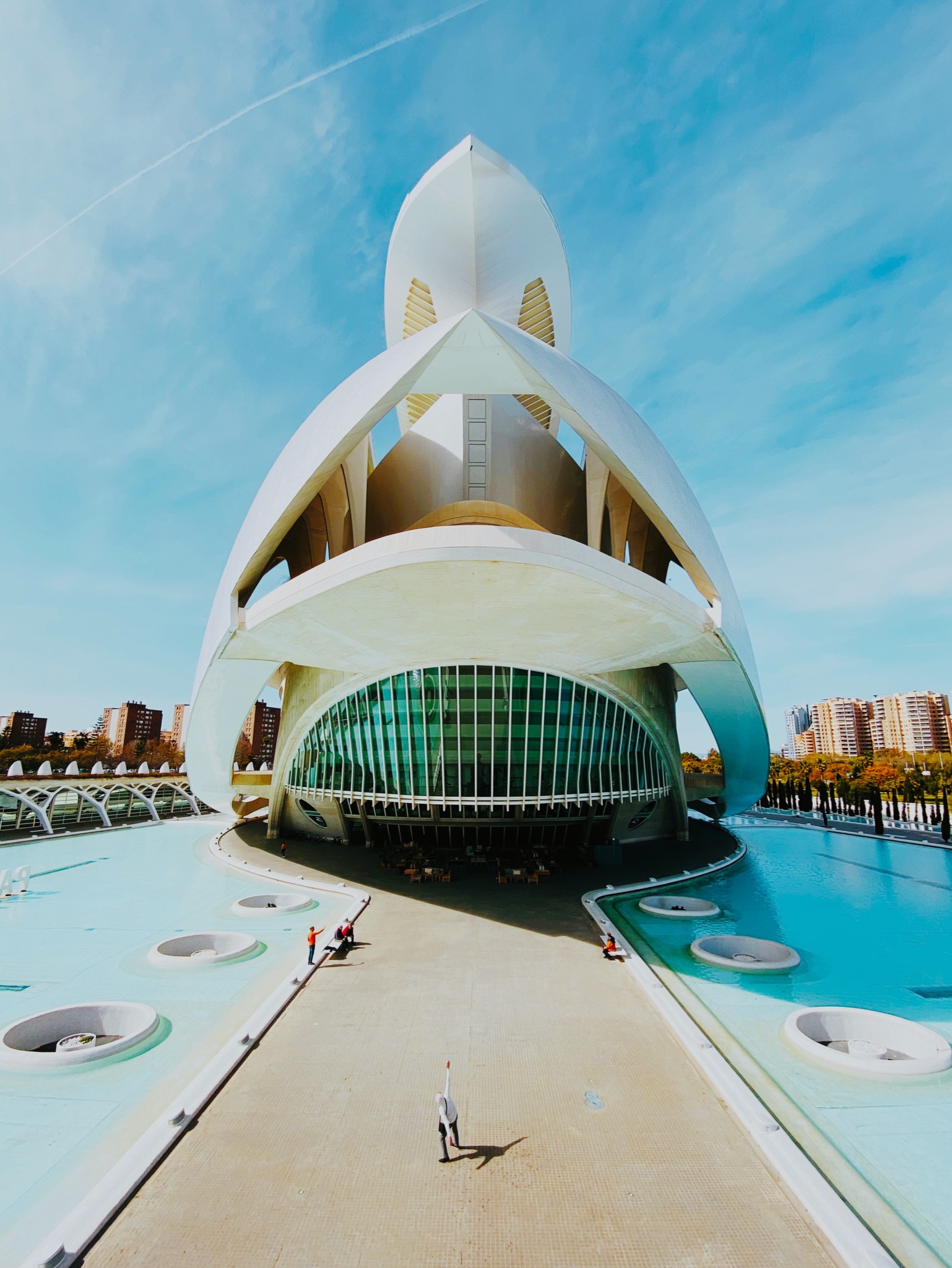 Its origins of the “Central Market of Valencia” date back to Islamic times, as a souk was located in the area known as the Boatella suburb. The market we know today has a surface area of more than 8,000 square metres, with an irregular floor plan of fourteen sides and divided into two areas, one for the sale of fish and the other for market garden products and salted fish.

Construction began in 1914 by the architects Alejandro Soler March and Francisco Guardia Vial, collaborators of the Catalan Lluís Doménech Montaner, and was completed in 1928. It is adapted to the plot it occupies and its roofs are resolved with innovative domes and sloping roofs. The roof frame is reminiscent of the great iron architectures, while the perimeter walls are fitted with polychrome ceramic plinths at the base and the so-called metal mallorquinas at the upper end. 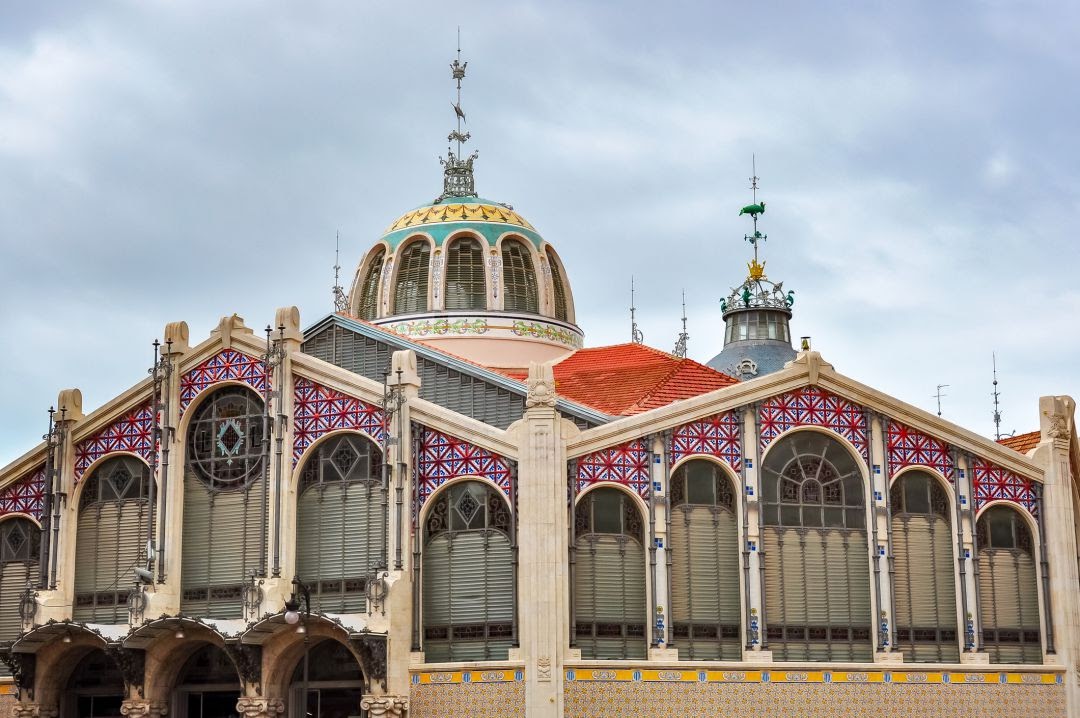 Located in the Palace of the Marquis of Dos Aguas, in the historic centre of Valencia, the museum is home to the largest national collection of ceramics from the 8th century to the contemporary period, with pieces even by Picasso.

Around 1740, the 3rd Marquis of Dos Aguas decided to renovate his manor house as a sign of his power and lineage, replacing the severe character of the previous medieval building with an opulent palace with a large alabaster façade.

Its current appearance is the result of important modifications, both internally and to the exterior façade, carried out in the 19th century, which had a great impact on Valencian society at the time due to its extreme sumptuousness and refinement. It was declared a Historic-Artistic Monument in 1941. 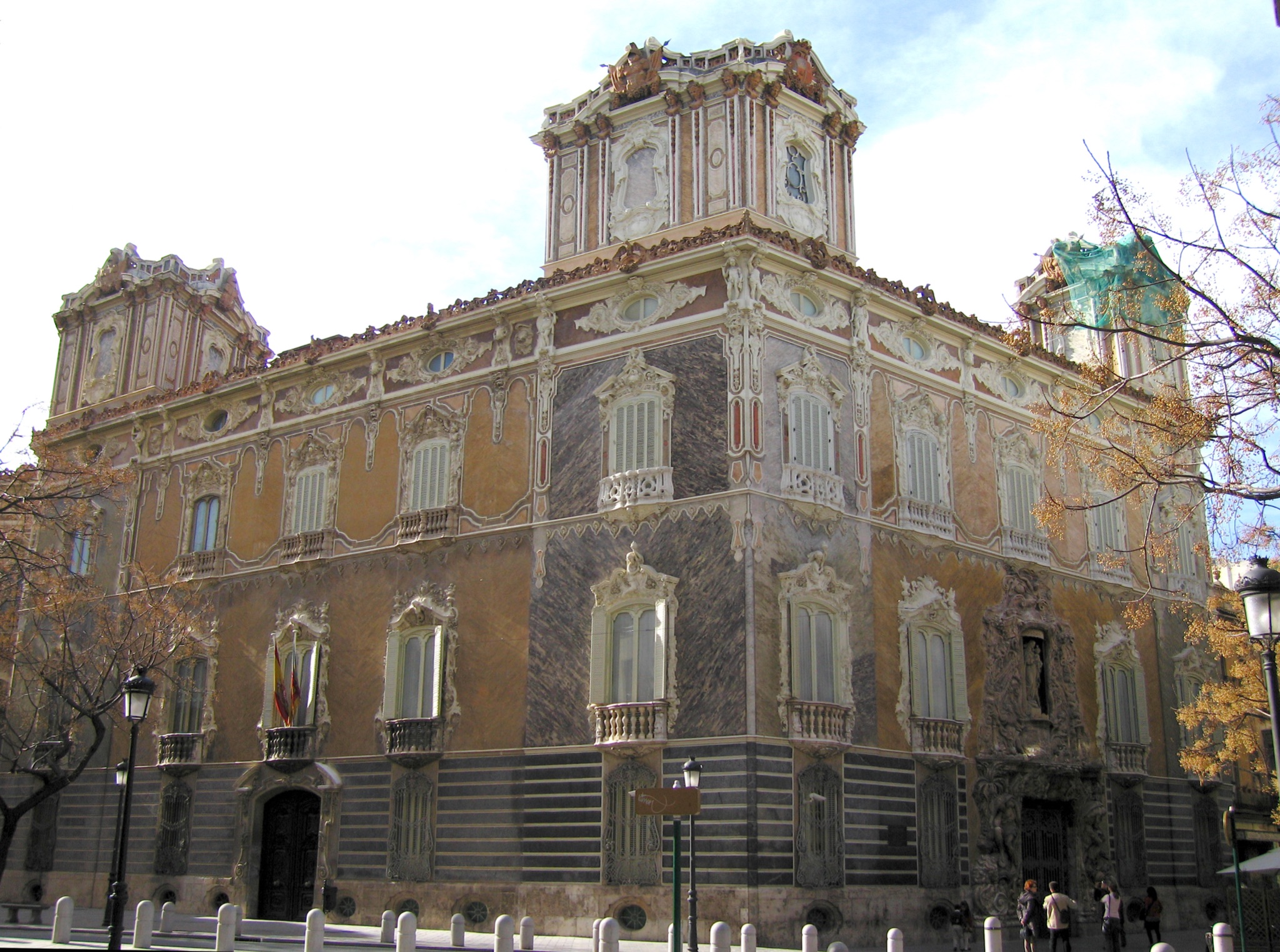 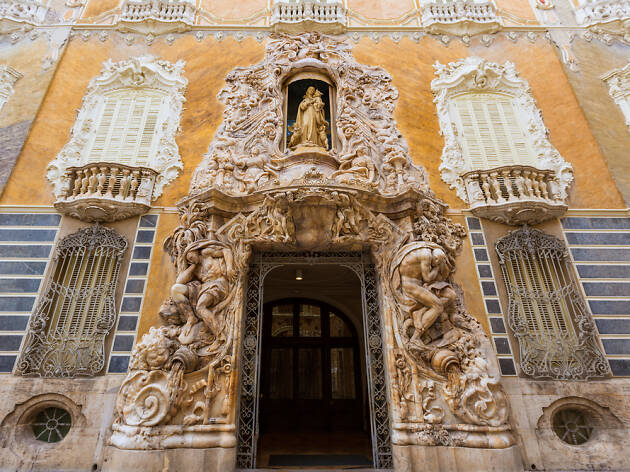 This is a residential building built in 1930 by Joan Guardiola that reflects the essence of Valencian Art Deco. Its façade causes the jaws of many to drop the floor, as it’s impossible not to notice as you pass by.

As you can see, its architectural elements from other periods and cultures have been reused in a completely arbitrary manner, such as compositions of columns with Egyptian capitals, pointed windows, exotic pagoda-shaped finials and above all colour. Lots of colours, as if it were a model.

It is so named because it was where, before the 1960s, Jews or Judías in the city and the surrounding area used to meet in secret. 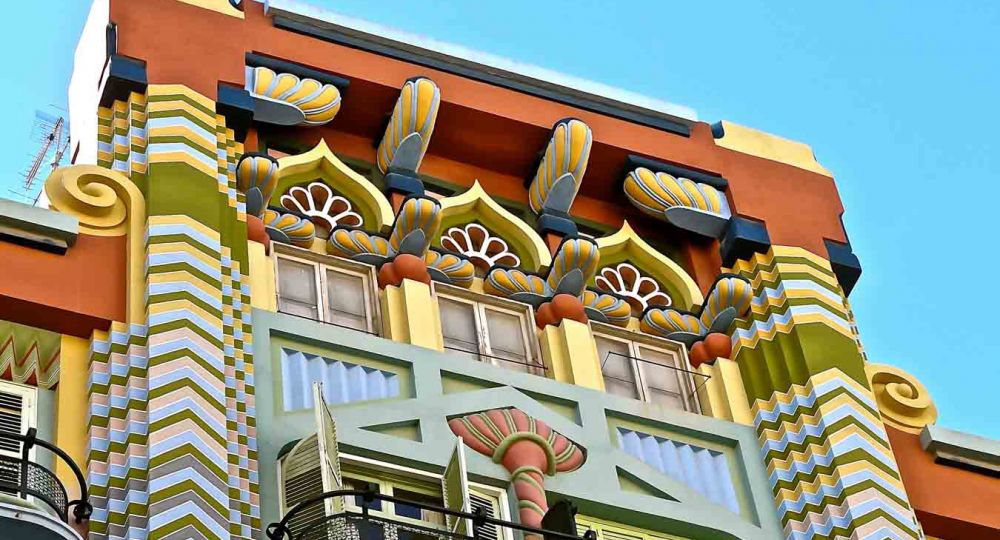 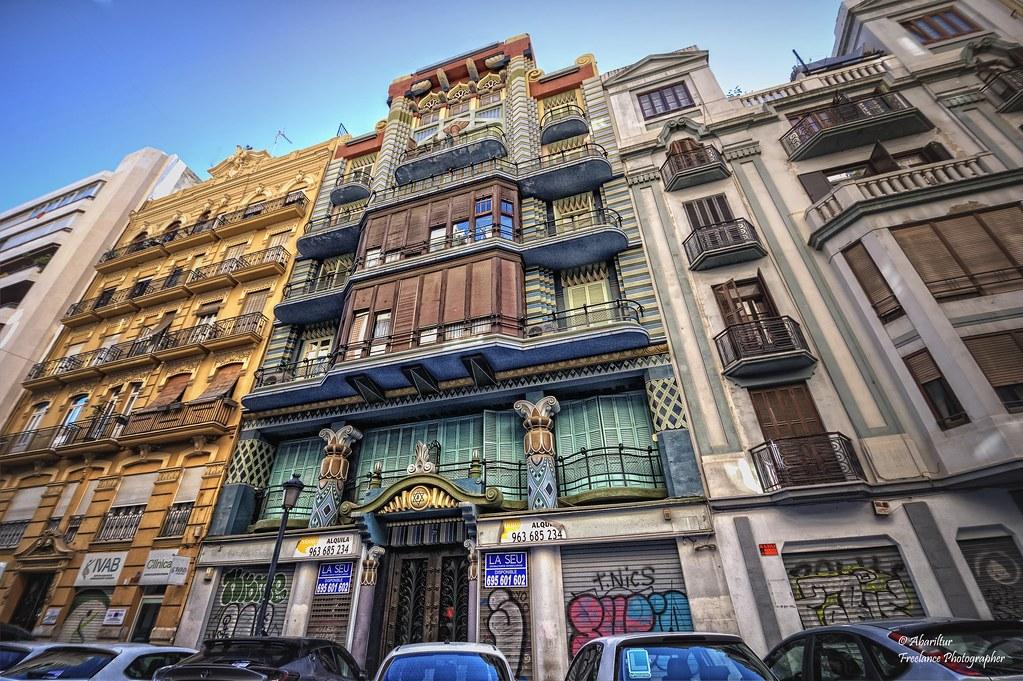 Translating to the “silk exchange”, La Lonja is one of the characteristic buildings of the city of Valencia, as well as being one of the most famous civil Gothic monuments that Europe has to offer. Having received high appraisal from the National Historic and Artistic Monument since 4 June 1931, it was declared a World Heritage Site by UNESCO on 5 December 1996.

It’s located in the city centre, opposite the Central Market and the Temple of the Santos Juanes, and occupies a rectangular area of about 1990 square metres. It is divided into the Salón Columnario or Sala de Contratación, distributed into three longitudinal and five transversal naves, the Torreón and the chapel, as well as a garden or courtyard of orange trees”.

Half a century of construction created this symbol of Valencia in its golden age. A masterpiece of Gothic style, now declared a World Heritage Site by Unesco. Be sure to discover its interior, where its enormous columns are joined by vaults that imitate huge palm trees. 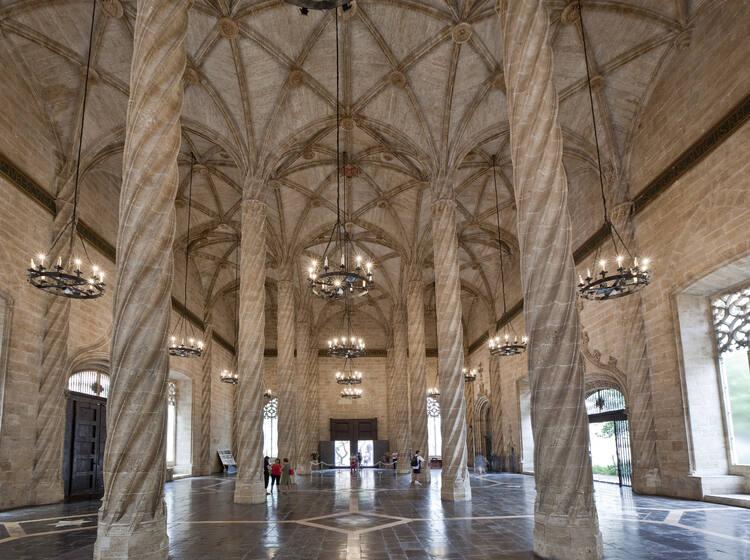 Valencia, like all the capitals of the time, was a walled city. However, to this day there are few remains of the defensive barrier, only these two constructions dating from the mid-15th century. With a late Gothic military profile, the Serranos Towers are characterised by the fact that they welcome travellers.

The “Quart Towers”, on the other hand, can be found somewhat more hidden among the hustle and bustle of the city, but this does not detract from their beauty and majesty.

Their construction began in 1392 by Pere Balaguer, and they were built to defend one of the most used entrances to the old city. In 1865, the walls were demolished and left free-standing, although from 1586 to 1887 they were used as a prison for nobles.

Subsequently, the back part was uncovered, and from the Plaza de los Fueros five rooms can be seen, with pointed arches and ribbed vaults. The Towers are a magnificent example of Gothic architecture. 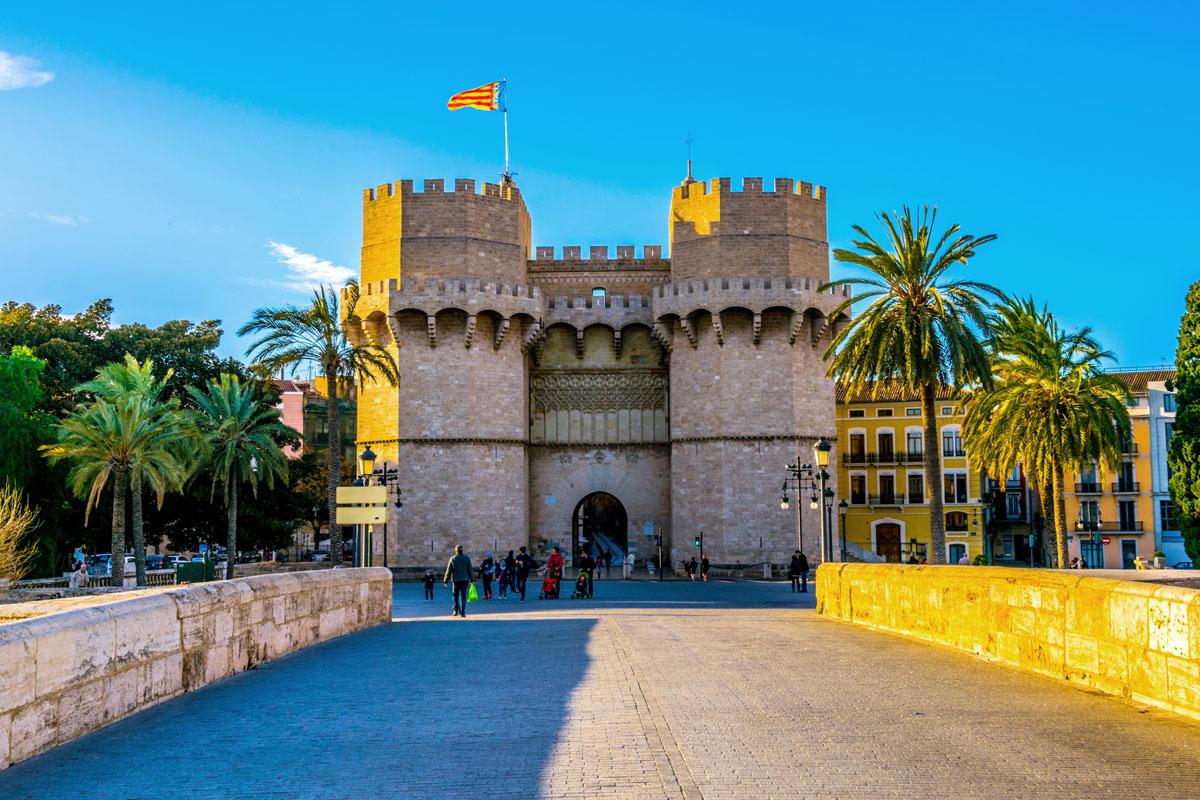 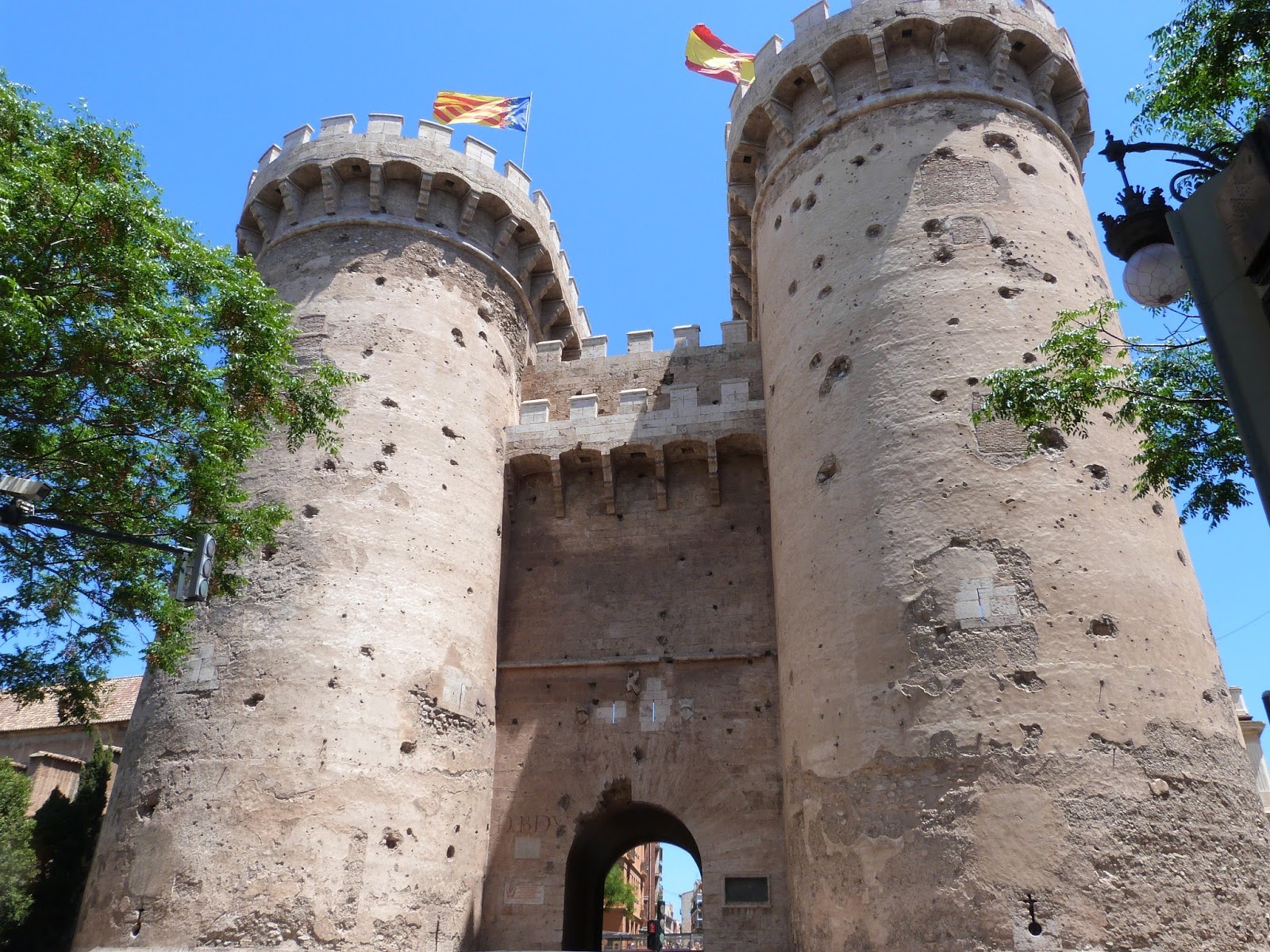 This beautiful square stands out in the minds of many that have already visited Valencia’s historic district. Plaza de la Virgen is an enchanting site that dates back to Roman times, giving the city the perfect balance of history and modern-day life. The spot is perfect for eating, drinking and just general people-watching. 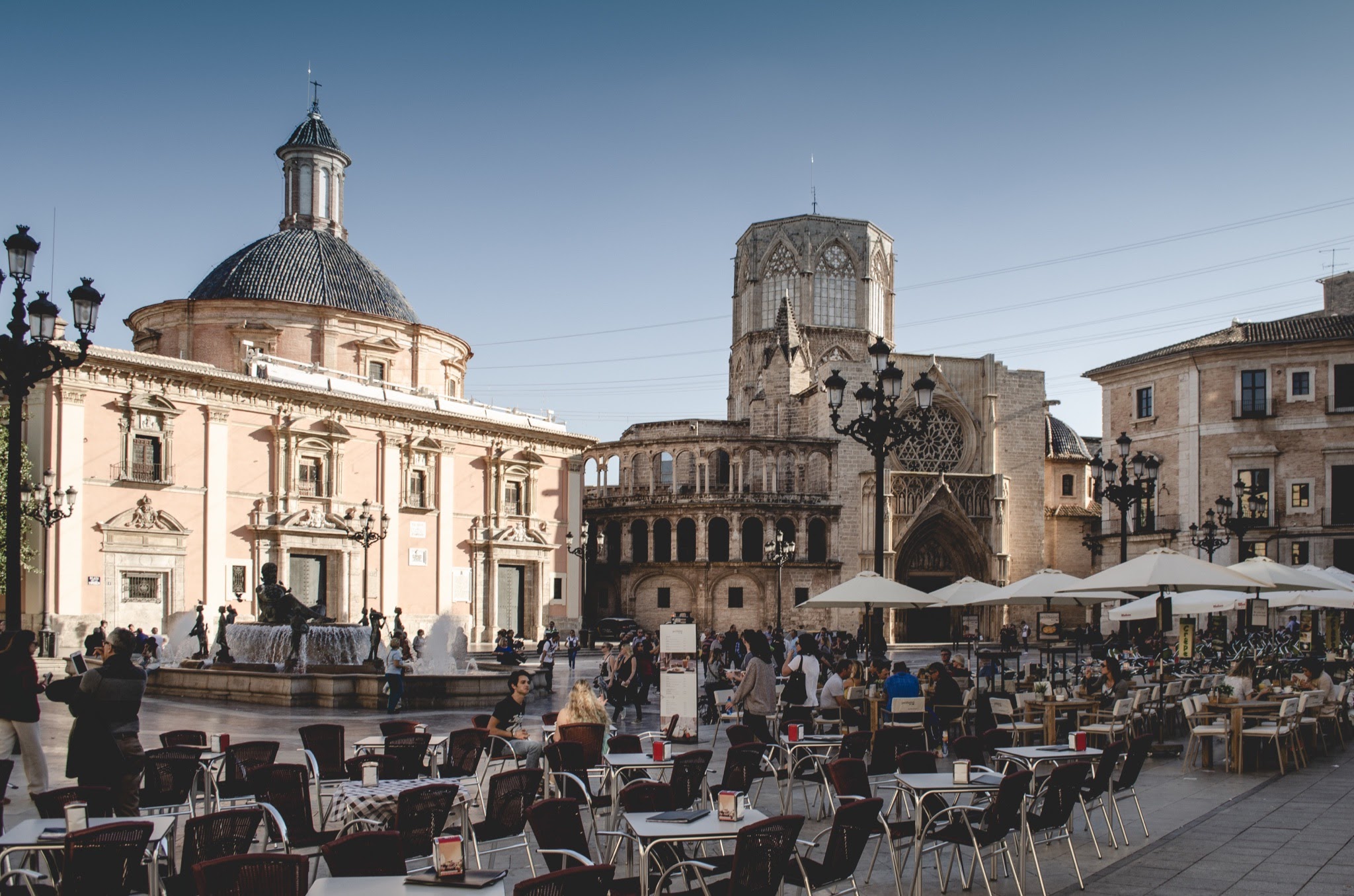 The Gothic Cathedral is Valencia’s most important religious symbol. Built originally in the 13th centure on the site of an earlier mosque, several changes and additions were made to it before its completion in the 17th century.

The Cathedral links two of the most iconic plazas – Plaza de la Virgen and Plaza de la Reina. The impressive structure boasts a variety of architectural styles, such as Romanasque, Gothic, and Baroque.

Regardless of whether you’re religious or not, this jaw-dropping Cathedral is definitely worth a pit-stop on your stroll. Audio guides come included with the entrance fee, and so you can learn about its history as you marvel at its beauty. 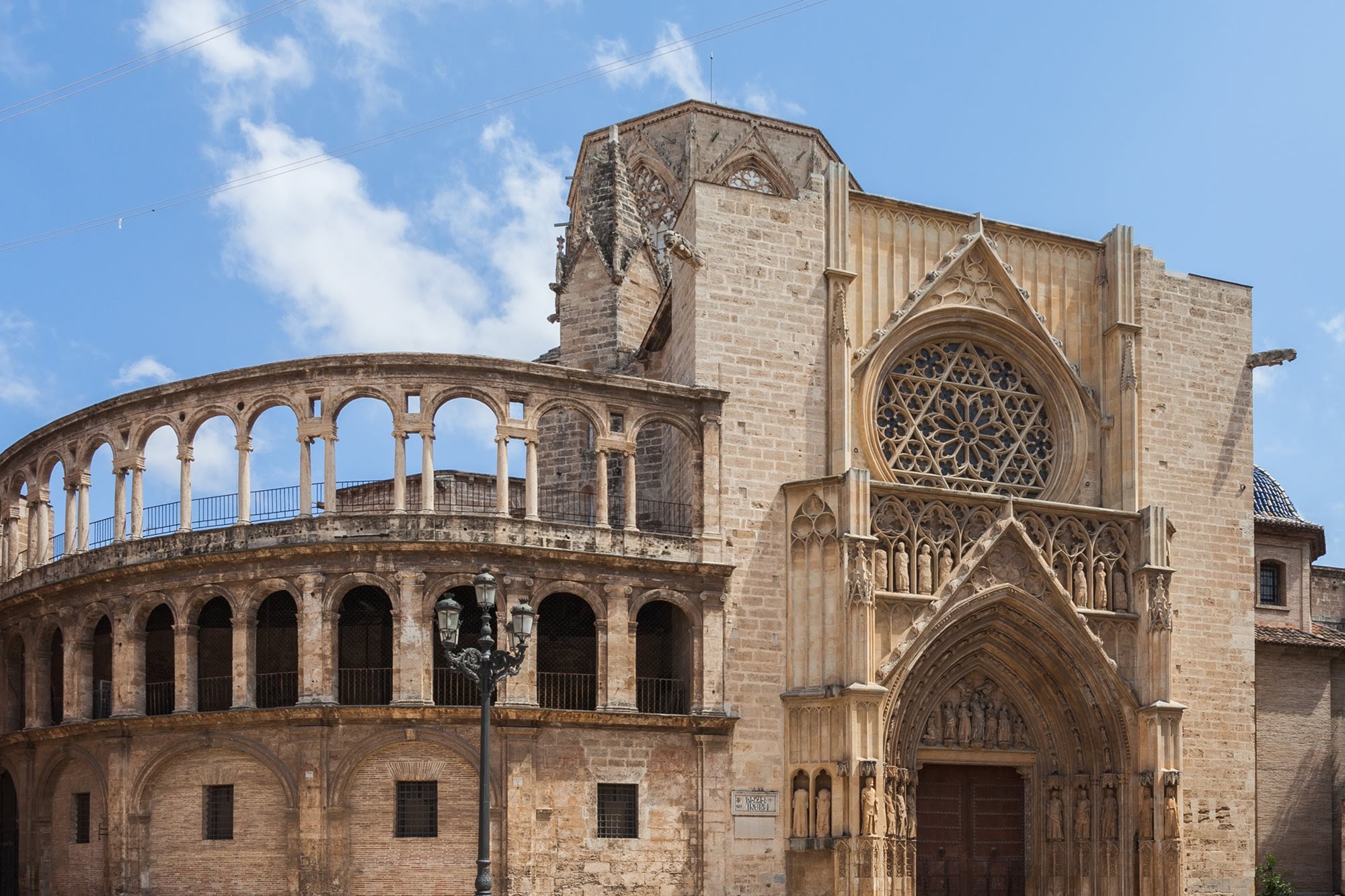 With these large dimensions, despite its reduction, it is one of the largest and most imposing squares in all of Spain. The square was inaugurated in 1859.

One service offered by the bullring, which is highly recommended, is the Bullfighting Museum, where you can witness the evolution and history of bullfighting from the 18th century to the 21st century. The museum was founded in 1929 when, thanks to donations, a large number of materials and objects related to bullfighting were sent to the bullring. 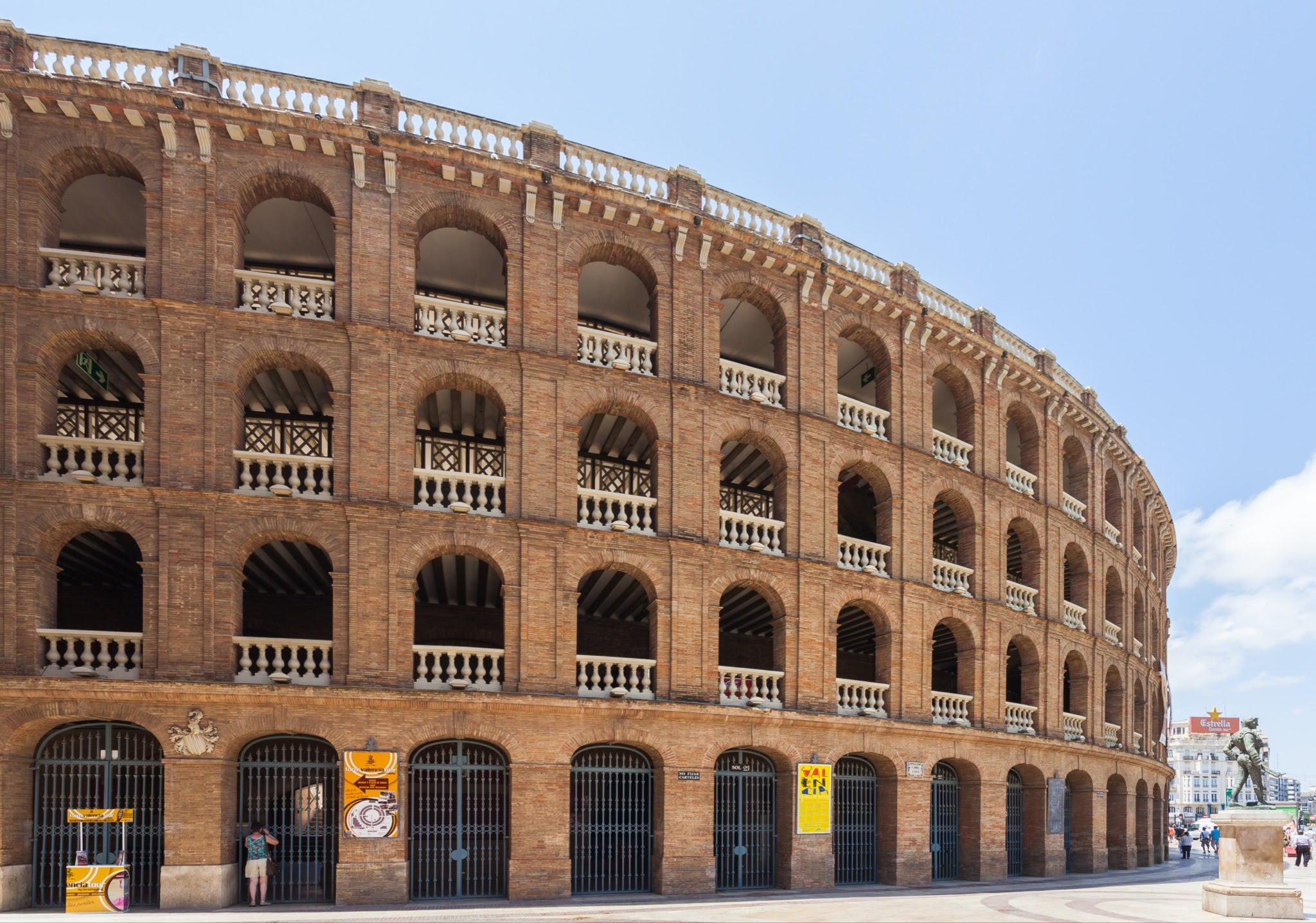 Previous articleBoutique Hotels of Spain: Why Opt for Intimacy at an Affordable Price for Your Next Holiday
Next articleCosta Blanca: Discover the Enchanting Towns that Make Up this Paradise Retreat

Head down to Direkt Optik in Moraira and inquire about their current models and frames available to not only have eyewear that’s on-trend but...
Property