Everything You Need to Know About Bilbao’s Guggenheim Museum

The Guggenheim Bilbao is one of the Basque regions standout selling points, as well as one of the world’s finest contemporary art museums. 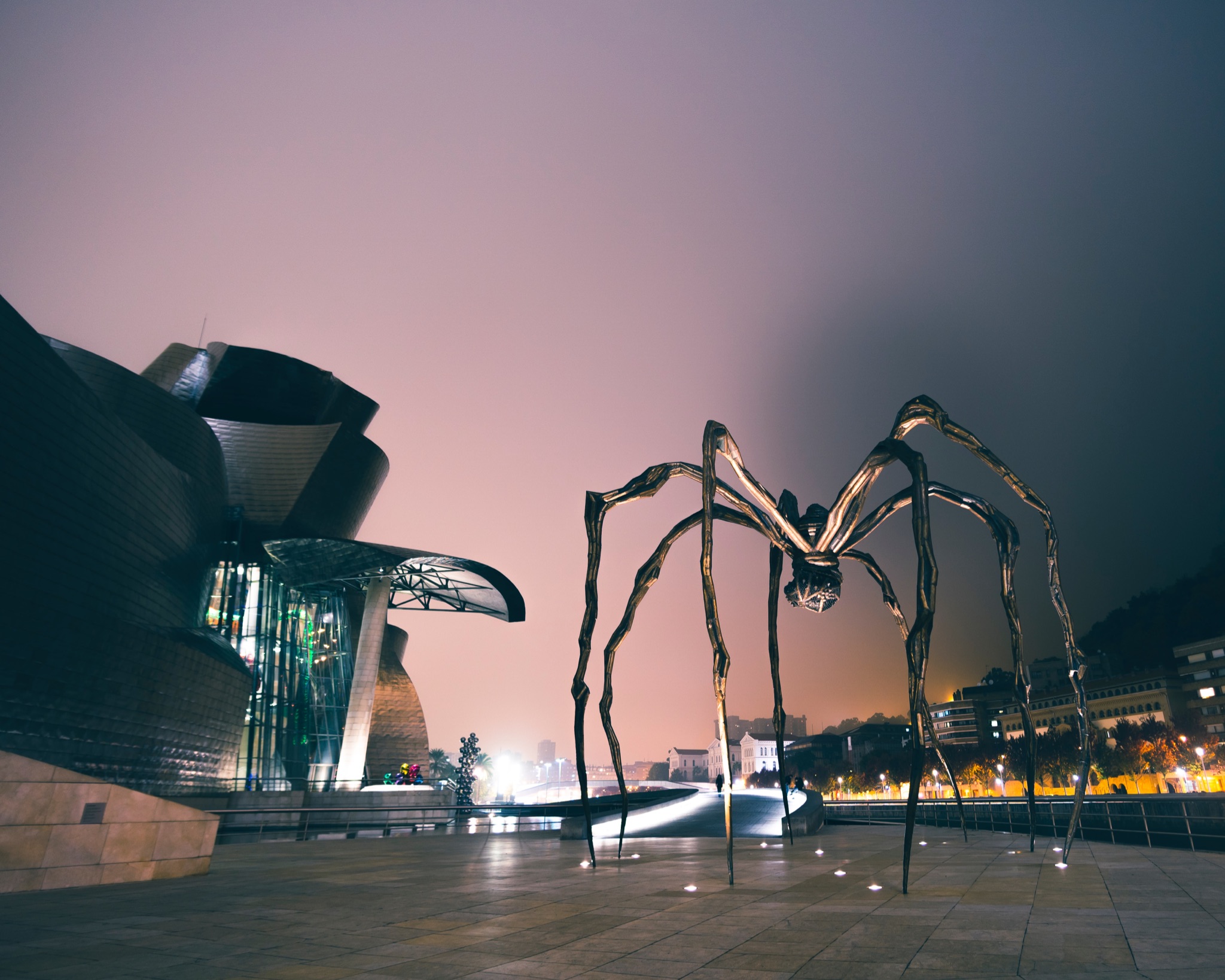 Located in the north of Spain, Bilbao is the largest city in the Basque Country, as well as the capital of the province of Biscay. In total there are three Guggenheim Museums: one in Bilbao, one in New York, and the other in Venice.

Lovers of modern art and architecture flock from all over the world to visit the Museo Guggenheim of Bilbao, and it’s not hard to see why. This impressive structure stands out brightly as a main landmark and attraction of the city since 1997. The construction period took about fours and cost 100 million.

The Guggenheim Bilbao receives over a million visitors every year, making it by the far the most prominent landmark of Bilbao as well as the whole Basque Country.

Its striking structure is recognised all over the world as a masterpiece of the 20th century. Designed by renowned architect Frank Gehry, the Guggenheim Bilbo is a monumental landmark that stands proudly on the edge of the Nervion River.

The museum is home to over 600 pieces of adored art from all around the world, making it a gold standard in the world of contemporary art. It houses works by esteemed and celebrated artists such as Pablo Picasso, Andy Warhol, and Richard Serra to name a few.

Historically, Bilbao was an important port and industrial town. After a downturn in economic activity in the 1970s, the government decided to implement a period of planned urban development. It was during this time that leaders and officials suggested the construction of the Guggenheim Museum in Bilbao in collaboration with the Guggenheim Foundation, a not-for-profit organization dedicated to art.

After signing the agreement in 1991, the project was appointed to experimental designer Frank Gehry, a Canadian-American architect. This was a breakthrough moment in his professional career, as his being chosen to lead the project launched him to worldwide fame and recognition.

The museum’s innovative design was inspired by Bilbao’s history and geographical location, from the fishing ports to the shipping industry. Hence, one could say that the museum’s structure is an artistic representation of the city itself. The building features unique titanium-laden structures, which capture the city’s life and culture. 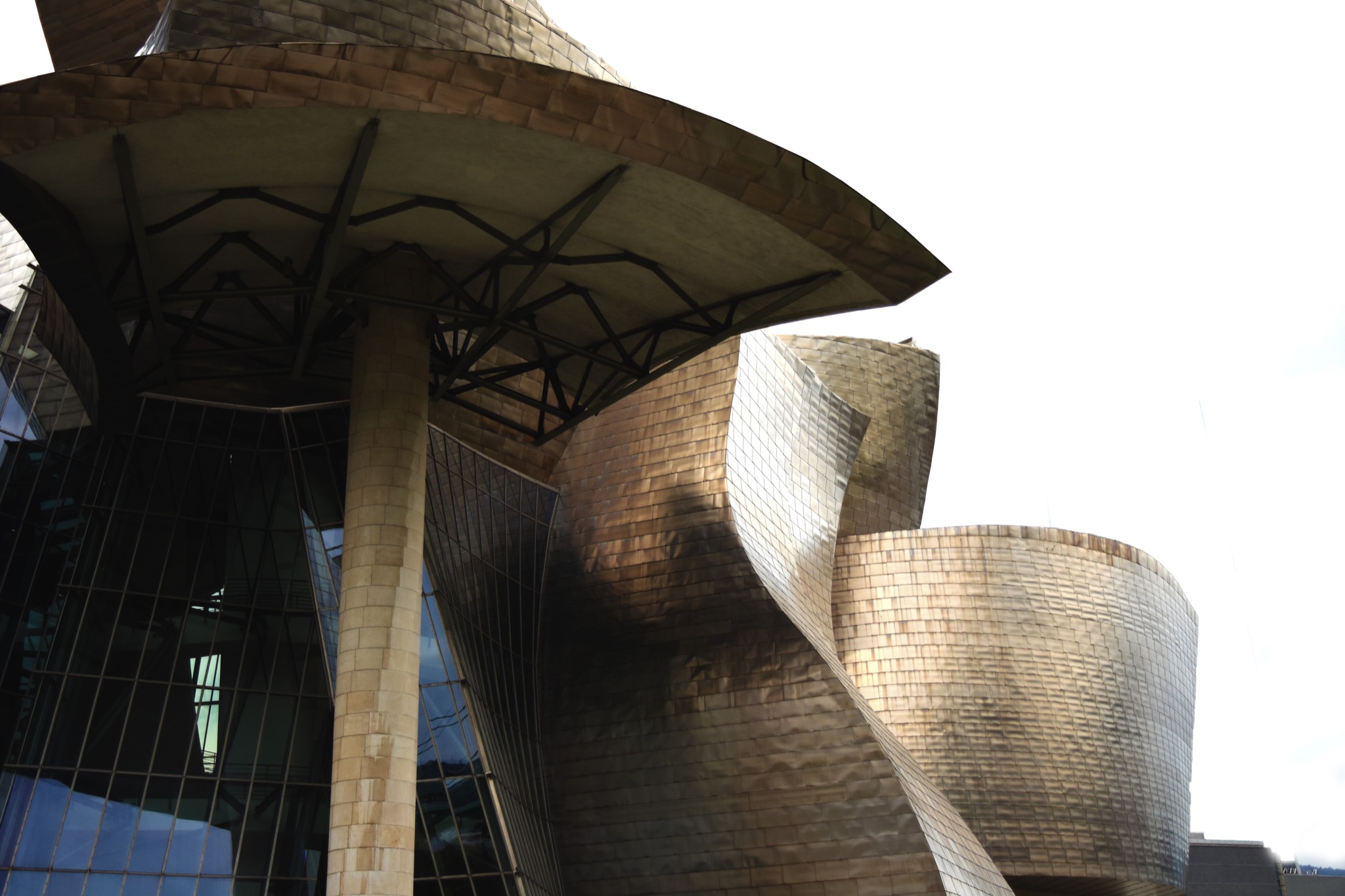 What to See at the Guggenheim

One of the world’s largest museums, the Guggenheim consists of a series of art galleries, media projects including interactive film exhibits as well as soundscape innovations.

With an impressive 11,000 square feet of exhibition space, the museum spreads across three floors of twenty galleries. Exhibitions here usually go on for about six months and are curated by both the Guggenheim Foundation and the museum. 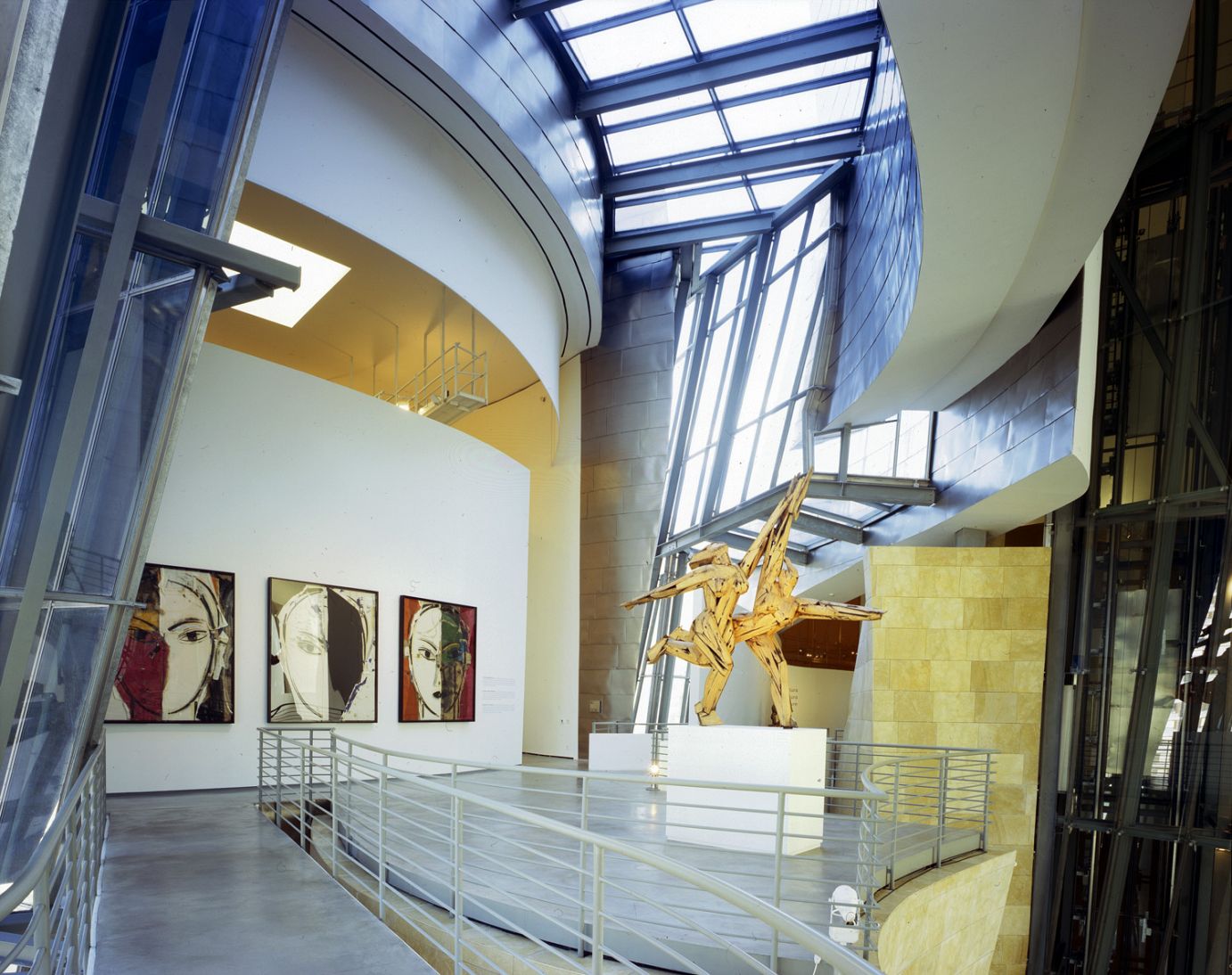 Inside the Guggenheim, Bilbao

There is even art to admire for free outside. In front of the main entrance is the “Puppy” by American artists Jeff Koons. This is a 12-metre high puppy statue covered in about 70,000 colourful flowers.

Don’t forget about the iconic giant metal spider created by French-American artist Louise Bourgeous on the riverside of the museum. Also known as “Maman”, the spider is a popular photo spot for visitors. 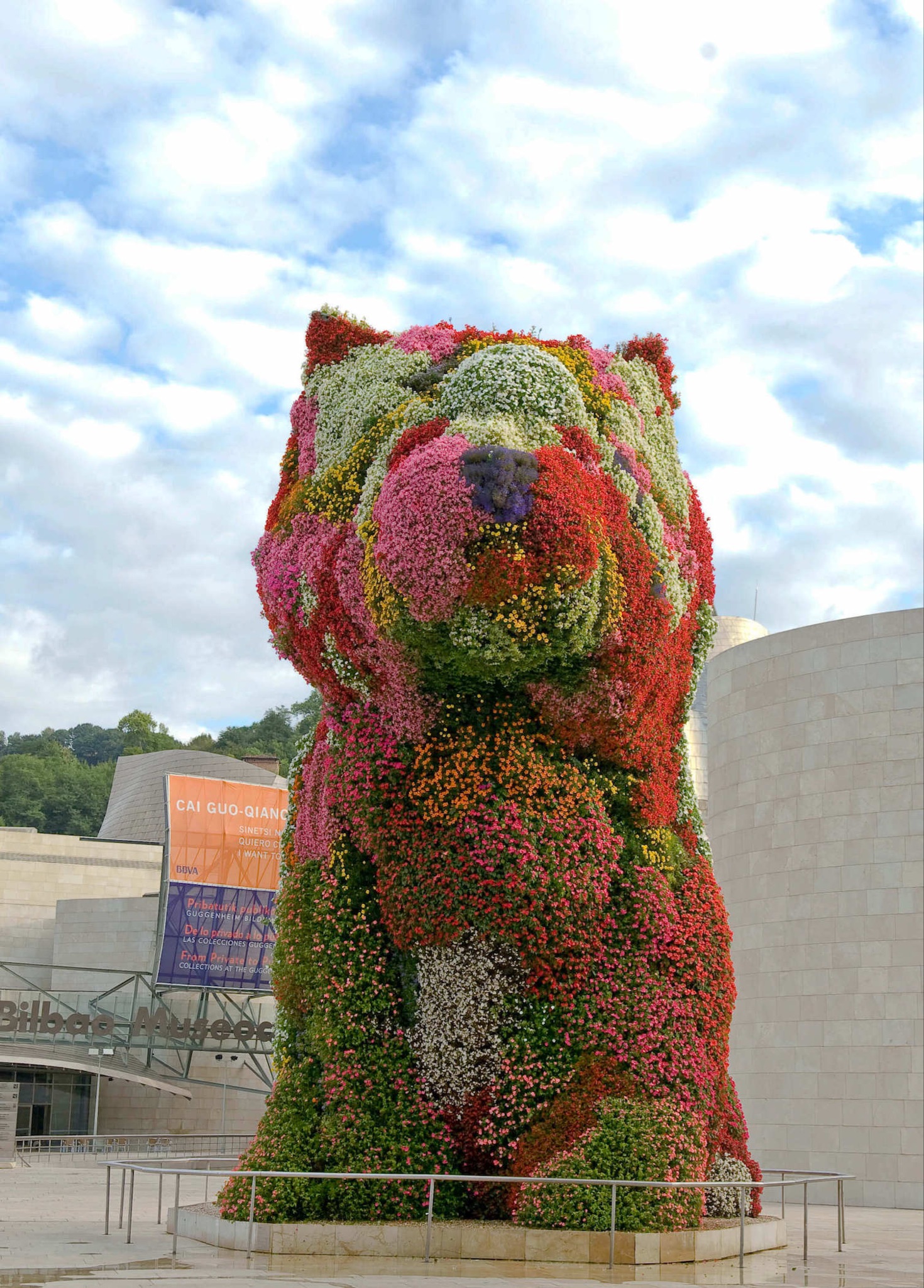 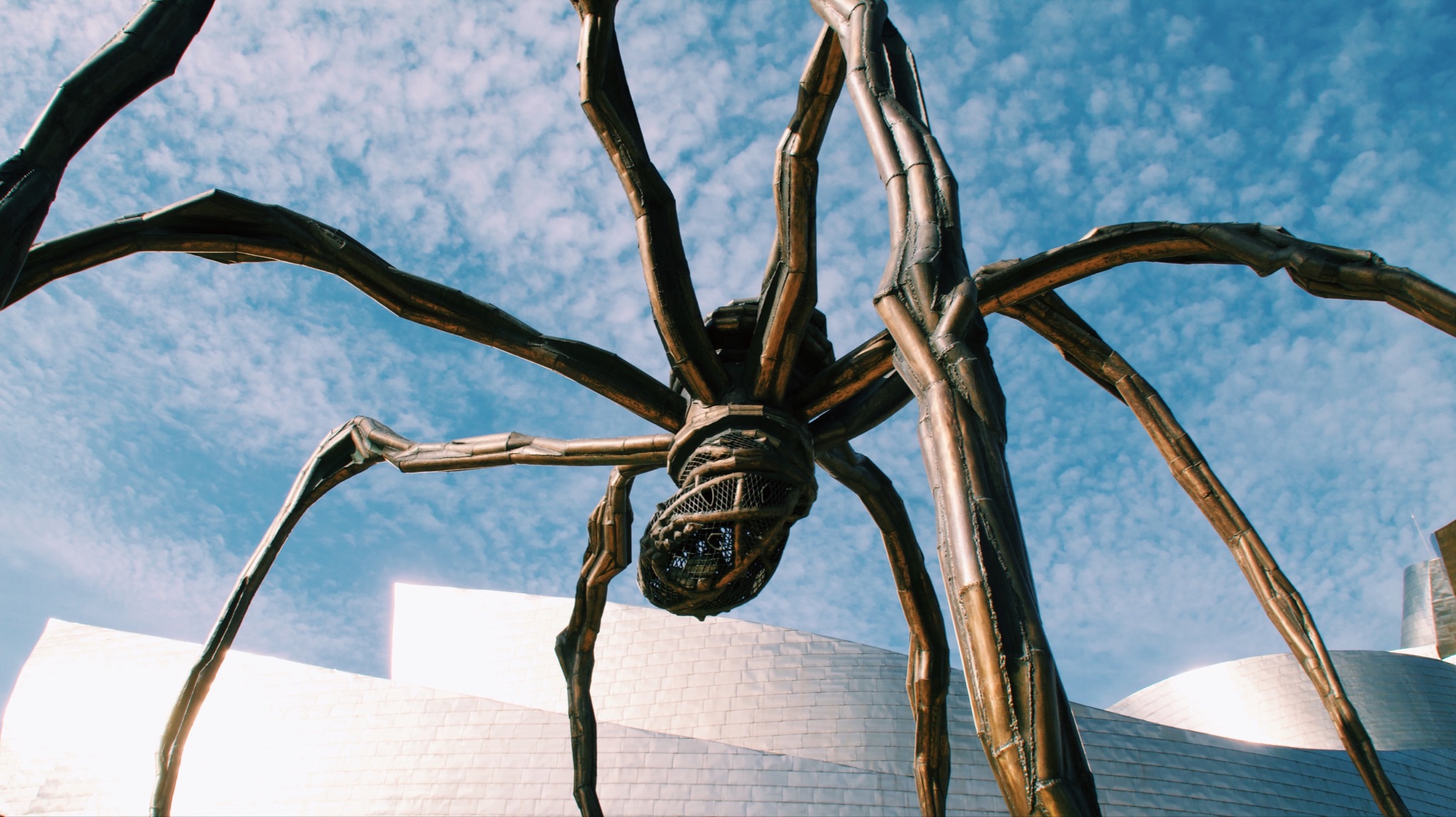 How to Visit the Guggenheim

Expect large crowds throughout the year at this popular tourist attraction. To avoid waiting in line and missing out on exclusive exhibits, we suggest that you go for “skip-the-line” tickets to the Guggenheim Museum.

Tickets cost €13 for visitors above the age of 12 and €7.50 for senior citizens and students. Entry is free for those under the age of 12 but must be accompanied by an adult.

Also, group bookings can be purchased for €12 per person in a group of between 20 to 50 people.