Discover the Most Beautifully Preserved Medieval Villages of Spain

Still haven’t chosen your holiday destination? Here are some of the seven best-preserved medieval villages in Spain that will take you back in time to the Middle Ages. 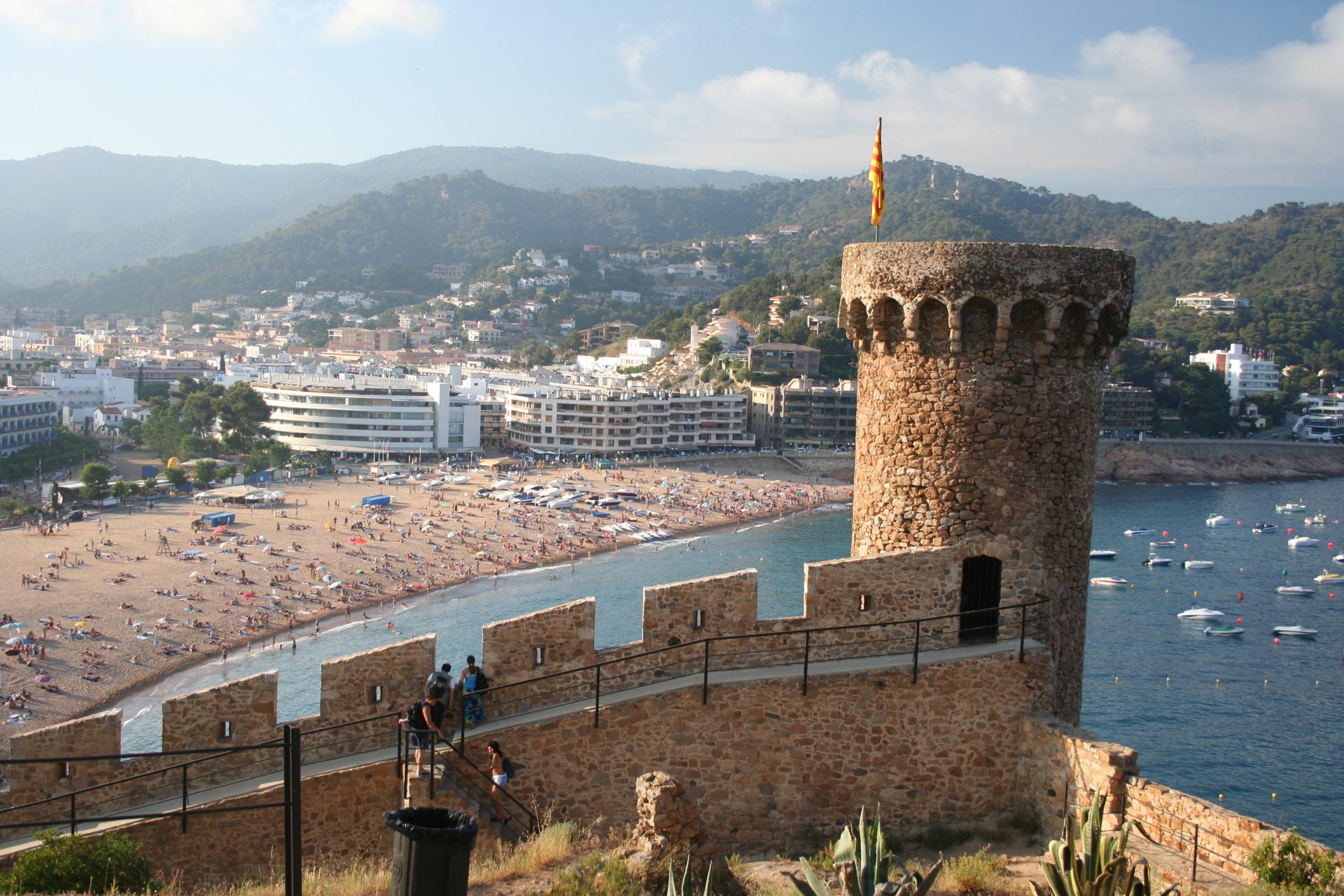 Spain hides incredible places rich in history, such as this route we propose to you through a series of the most beautiful and best-preserved medieval villages and historic sites throughout the country. Essential walks and visits to their castles, walls, cobbled streets, churches or palaces capable of transporting us back to the Middle Ages.

Medieval villages with that je ne sais quoi in which history, legends and traditions intertwine, trapping the visitor with that medieval charm that has managed to survive the passage of time to the present day.

Let’s take a look at seven Spanish villages where time seems to have stood still in medieval times:

Peñafiel was taken by the Arabs in the 10th century and conquered by the Christians in the 11th century. Its skyline is dominated by its castle, which is very unique, especially for its linear yet imposing structure with the town at its feet. It was restored by Don Juan Manuel, nephew of Alfonso X the Wise, and built again in the 15th century.

The town soon began to prosper with the construction of several churches and a great artistic movement. Nowadays you can visit the Plaza del Coso, the Clock Tower, several of its churches, its castle, which is currently one of the best-preserved in Spain and where you can also visit the Provincial Wine Museum, and finally its popular architecture which has survived the passage of time. 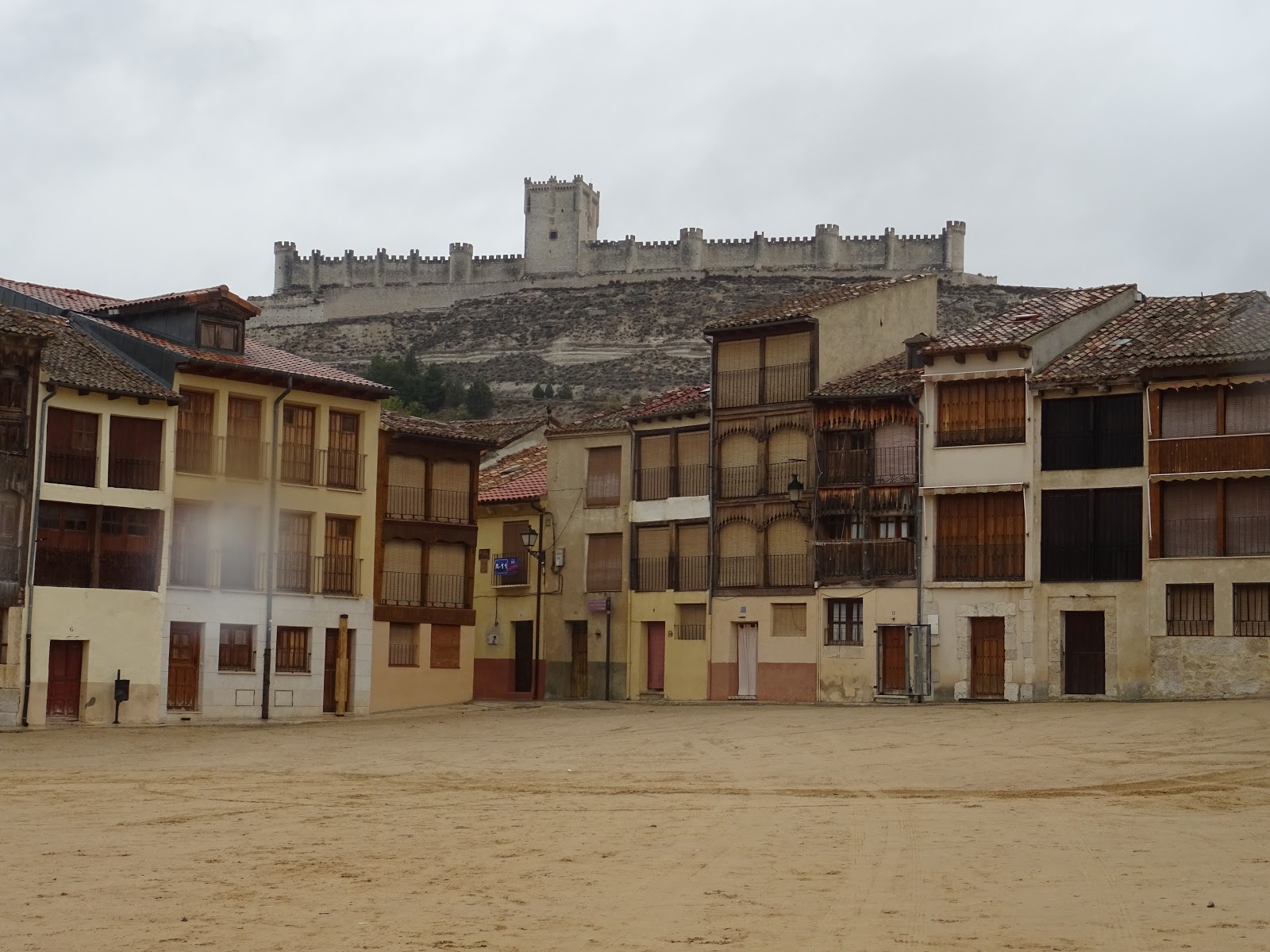 The province of Segovia in general, and Pedraza in particular, ooze history and top-tier gastronomy. Barely an hour from Madrid, this town of cobbled streets is one of the medieval jewels of the whole of Castile-León. Under the control of the lineage of the Constables of Castile for several centuries, today the historic centre of Pedraza has been declared a Monumental Site since 1951.

In addition, Pedraza was until well into the 17th century an important centre for the production of Merino sheep’s woollen cloth, from where it supplied cities such as Florence and Bruges. Today, it experiences a vibrant cultural life with events such as the Candlelight Concerts and a seductive gastronomic offer.

In addition to being one of the oldest cities in Spain because its archaeological remains have indicated that its beginnings date back to the Neolithic period, there are also numerous traces of its later Roman occupation in the area, but also of the Islamic period of which we must highlight the great cultural legacy that has survived the passing of the centuries and which is still preserved in the traditions, the farming systems, the gastronomy or in the town planning. Ronda became the capital of Takurunna, which was one of the provinces into which al-Andalus was divided.

Today, Ronda attracts hundreds of tourists every day who want to visit its most representative monuments such as the New Bridge whose views from the top are incredible or the Bullring which is one of the oldest and best-preserved in Spain whose origins date back to the 18th century. 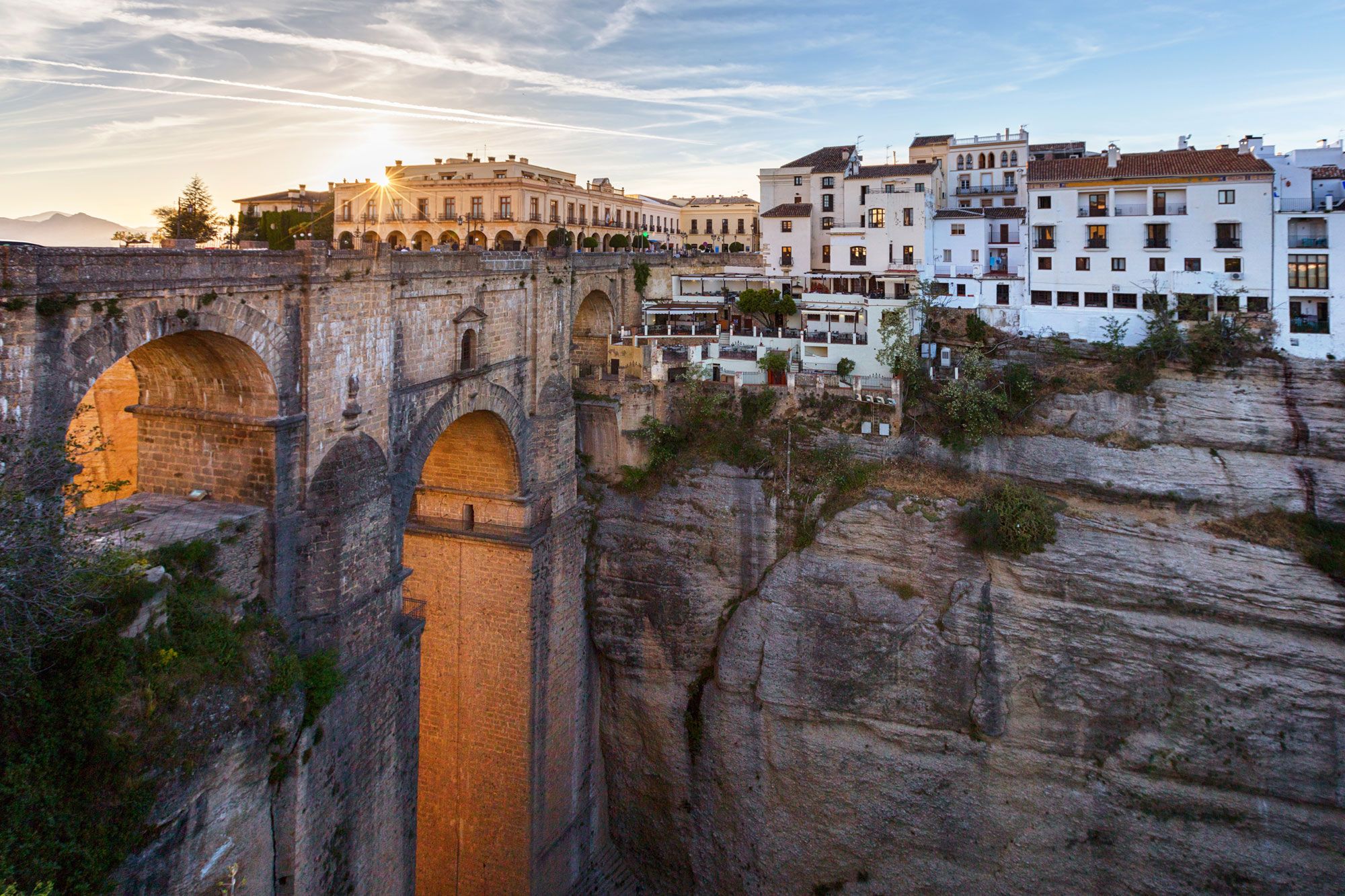 Visiting Peratallada is like visiting an open-air museum. This small Empordà village, with a population of around 400, enjoys a strategic location in the heart of the Empordà, just a few kilometres from some of the most beautiful beaches on the Costa Brava and not far from the border with France.

Declared an asset of national interest, this village is one of the most important centres of mediaeval architecture in Catalonia. It retains its old feudal appearance, with narrow, winding streets, with numerous inlets and protrusions. The most impressive features are walls and the moat dug into the rock. In addition to its architectural and historical attraction, there is also a wide range of handicrafts on offer.

One of the most prominent towns on the Costa Brava of Catalonia, Tossa de Mar boasts à deep history as a Neolithic, Iberian and Roman enclave, as evidenced by its heritage remains, but also as a perfect summer resort due to its climate and excellent beaches. Situated in the bay on a small development on the beach with seven imposing circular towers, the walled enclosure of Tossa is currently one of the most outstanding icons of the town.

To enjoy the medieval Tossa de Mar, nothing beats visiting its medieval fortification, the traditional fishermen’s quarter where the tourist area of bars and restaurants is now located or the old Church of San Vicente. But if you want to enjoy small coves that can be reached by car or beaches such as Gran Playa and Reig beach, which are located in Tossa de Mar itself, this is also the perfect place to do so.

Buitrago de Lozoya is found on the border of the two Castillas and is the residence of the first Marquis of Santillana and place of emblazoned mansions. Its almost intact walls, its bullring inside the castle, as well as a bridge and an aqueduct over the Lozoya River are outstanding. It was founded by the Romans in the year 190, although it is considered that its original wall was built by the Muslims or in the early days of the Christian Reconquest.

It’s the only town in the province of Madrid that has preserved its old walled enclosure intact, in fact, its walls have been declared a national monument and cover a perimeter of approximately 800 metres. Another must-see is the 14th century Clock Tower, also declared a National Monument, as well as the castle, although it is in a state of ruin, and the Gothic church of Santa María del Castillo.

In addition to these visits to the medieval part of Buitrago de Lozoya, you can also visit the Picasso Museum, with almost 60 pieces of art, almost all of them based on the theme of bullfighting.

Perched at an altitude of 660 metres above sea level on a mountain range parallel to the Pyrenees, Alquézar is located in an impressive landscape of limestone and ravines shaped by the river Vero. At the highest point is its castle-collegiate church, declared a National Monument in 1931.

The village has all the charm in the world, with endless narrow streets and picturesque corners to lose yourself in. In fact, the medieval architecture and layout of the town centre have been proclaimed a historic-artistic site since 1982. It is also an ideal destination for nature and wine lovers, as it is located in the Somontano de Barbastro region, a wine-growing region par excellence. 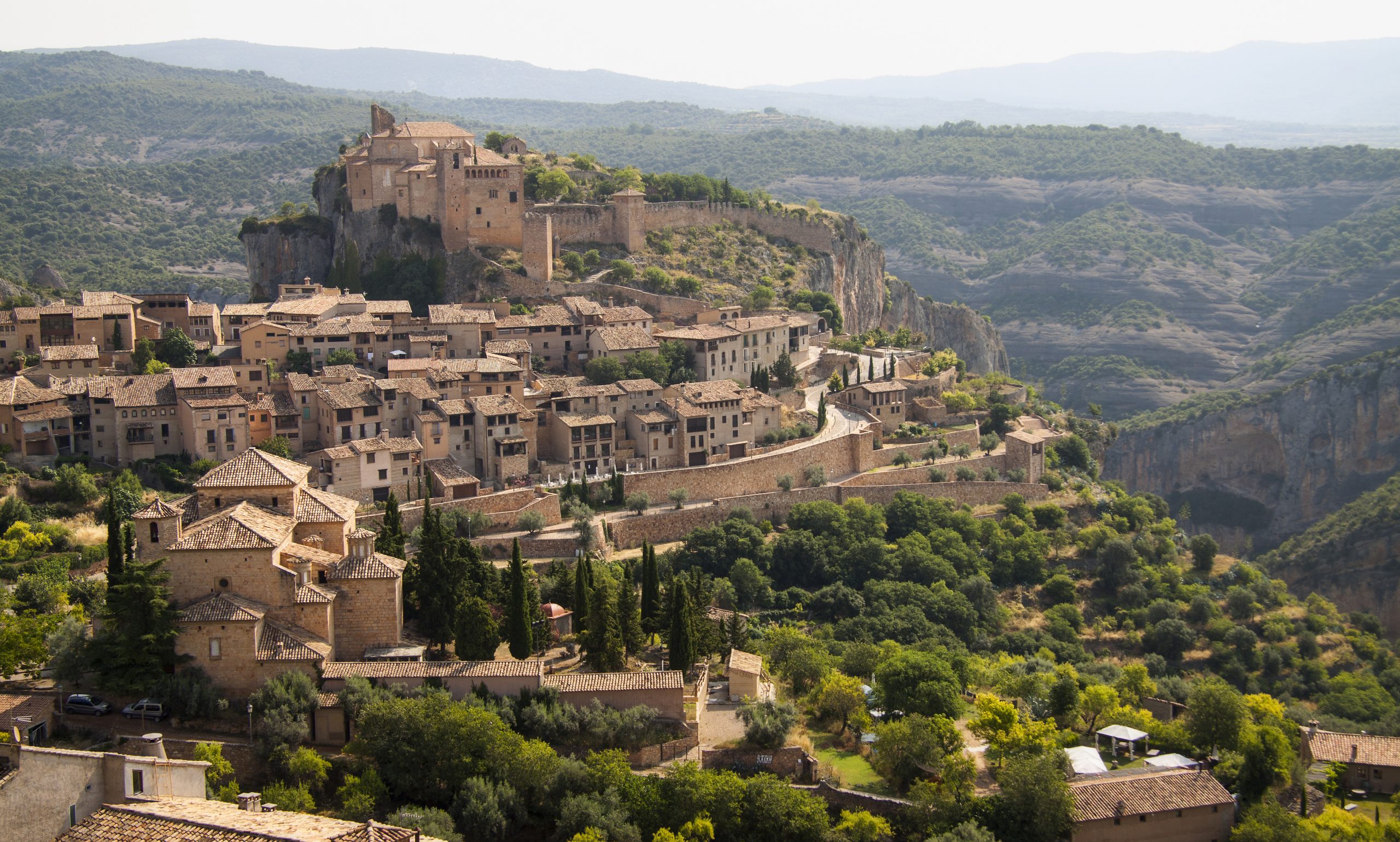 Previous articleRenting a car has never been easier than with VICTORIA CARS.
Next articleMORAGUESPONS Mediterranean Houses; Selling Or Buying Your Home Has Never Been Easier