Xabia, Was An Act of ‘Environmental Terrorism’ – NOT a TV Sitcom

After anger and frustration was directed at News channels who repeatedly mis-reported the location of the recent forest fires in the town of Xabia – The Sun newspaper made a cheap shot at selling more copies by making a mockery of the situation, while the residents of Javea (Xabia) witnessed the devastation first hand. The front page headline “BURNIDORM” was distasteful to say the least, and “60.6 kilometers incorrect” at best.

What happened in Xabia was not journalistic highlights from a television sitcom where this ‘play on words’ might work or be better suited, this was a real life disaster with the potential for loss of lives. The endless barrage of what I would call ‘lazy reporting’ only succeeded in causing unnecessary confusion and panic at a time when people were worried about the safety of loved ones, or losing their homes to the fires.

The Mayor of Xabia, Jose Chulvi said with a heavy heart – “During this terrible time, we have witnessed and suffered a lot of pain, but we have also seen great efforts of solidarity that we will never forget. Personally I have re-lived very hard moments of uncertainty and concern. As Mayor of Xabia, but mostly as a neighbor of these people, I will say that… they may have burned trees and houses, but not our will, nor the conviction of the people. We will re-build ourselves at all costs.”

Today, Xabia received the news they had hoped for. After much speculation had spread regarding the possible building on natural parkland and wooded areas affected by the fires – Puig announced that he has successfully incorporated a legislative ‘amendment’ in this years Budgeting Act for the shielding and protection of land affected by fire.

A difficult measure of smoothing over the Consell of Fabra no doubt, as they had previously incorporated a clause that left the decision solely in the hands of the Administration. Woodland is now well shielded, despite the fact that the State law of Montes still allows for reclassification in some cases. Valencian ecologists reported to have viewed the new changes introduced as positive.

So what does this actually mean?

The implementation on 29th of November, measures tax, management, administration and finance, and of those changes introduced in the law 3/1993 a reversal to the previous Government of the PP, enabled “exceptions” in the prohibition regarding forests that suffered from wildfires during the term of 30 years. But only providing they embraced construction projects relating to infrastructures which they loosely called “of general interest.” Now that article 59.4 has all but disappeared, the standard application that prevents the change relating to “the use of forest ground that has suffered a fire” will be defined with much needed clarity and stripped of it’s mountainous red tape. A measure that we can all agree – was desperately needed.

Arson We Know. But what about….?

IF the fires were (as most already suspect), deliberately started for financial gain, It’s a bitter pill to swallow if true. This means that the dark deeds of whoever is responsible – were fruitless. Information that recently came from who I’m told is a ‘trusted source‘ states that one or more of the young men arrested admitted to being paid to do it. I am yet to find out who this ‘trusted source‘ is however. My thoughts drift only in the direction of those who suffered in all of this – the perpetrators on the other hand, are not worthy of a single one of them.  Let justice be served!

Many of you may begin to see FOR SALE signs popping up in places, but before there is panic that something is ‘afoot’ these could purely be from private land owners who have every right to sell if they so wish  – more updates and news will undoubtedly appear as the weeks and months go on to bring more clarity to this subject. The Act amendment has given good grace to areas of heritage and natural parkland. Welcoming news for Xabia and the bordering town of Benitatxell.

Another important legislative change is the additional modification of article 33, the law 11 /1994 of natural and protected spaces within the community. The change in the treatment of such spaces and natural parks, can once again return to the current treatment specifics regarding such areas of natural and ecological beauty. HOORAH!

After so much devastation, and as the mammoth clean up task continues, Xabia proves once again that “It may be tiny in comparison to a well-funded Government, but it is also a force to be reckoned with when backed into a corner.”

This positive news will come as a relief to so many, but let’s not forget… due to the terrible events that began on Sunday 4th September 2016, many are now being forced to make some incredibly tough choices as they begin their lives over again –  some have lost everything they have ever owned.

“If you know of a fundraiser or donation page that is aimed at helping those who have suffered in the fires – please get in touch in the comment section below and we will happily publish an article on our site and social media pages.”

The familiar thwop, thwop, thwop of surveillance helicopters that still fly overhead – have us looking to the sky with (what I’m pretty certain), are the same thoughts running through all of our minds. What we can all be certain of is… with the overwhelming community outpouring, rescue and emergency services, and a Mayor who’s not afraid to fight back – Xabia truly is – in GREAT hands.

With Special Thanks to Photographer Marin Dugandžić for this incredibly poignant photograph.

A Town With A Big Heart! 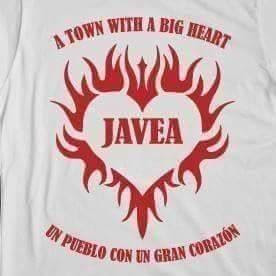 Since the devastating fires in Javea, Telitec have joined forces with Howard Wescott and Grant a Wish and donated alongside many other local business to help create charity t-shirts to raise money for the local Bomberos that have worked tirelessly to stop the fires.

Every single cent raised will be given straight to the Bomberos to helping them to continue their amazing work, and the T-shirts will be sold across Javea,
If you would like to donate please find the relevant details below:
Bank Account Details
Grant a Wish
2100 7704 2802 0000 5881
La Caixa
Adva. Alicante 6
PLEASE STATE DONATION IS FOR JAVEA FIRES X
Cash donations: in an envelope with name, amount and e mail for receipt marked ‘ Bomberos’ via Karen Rushton Lancashire Bruja in Javea.
Donations can also be given via Nicola Franklin at High Street Heaven
The T Shirts will be €10 each and be available from Telitec, alongside many other outlets.
FIRST HUNDRED BEING NOW MADE!!
Help Raise £5,000 https://l.facebook.com/l.php?u=https%3A%2F%2Fwww.justgiving.com%2Fcrowdfunding%2Falana-innes&h=hAQFdgrDB

PLEASE HELP raise £20,000 for those who lost their homes – Donate HERE

Thank YOU From Xàbia