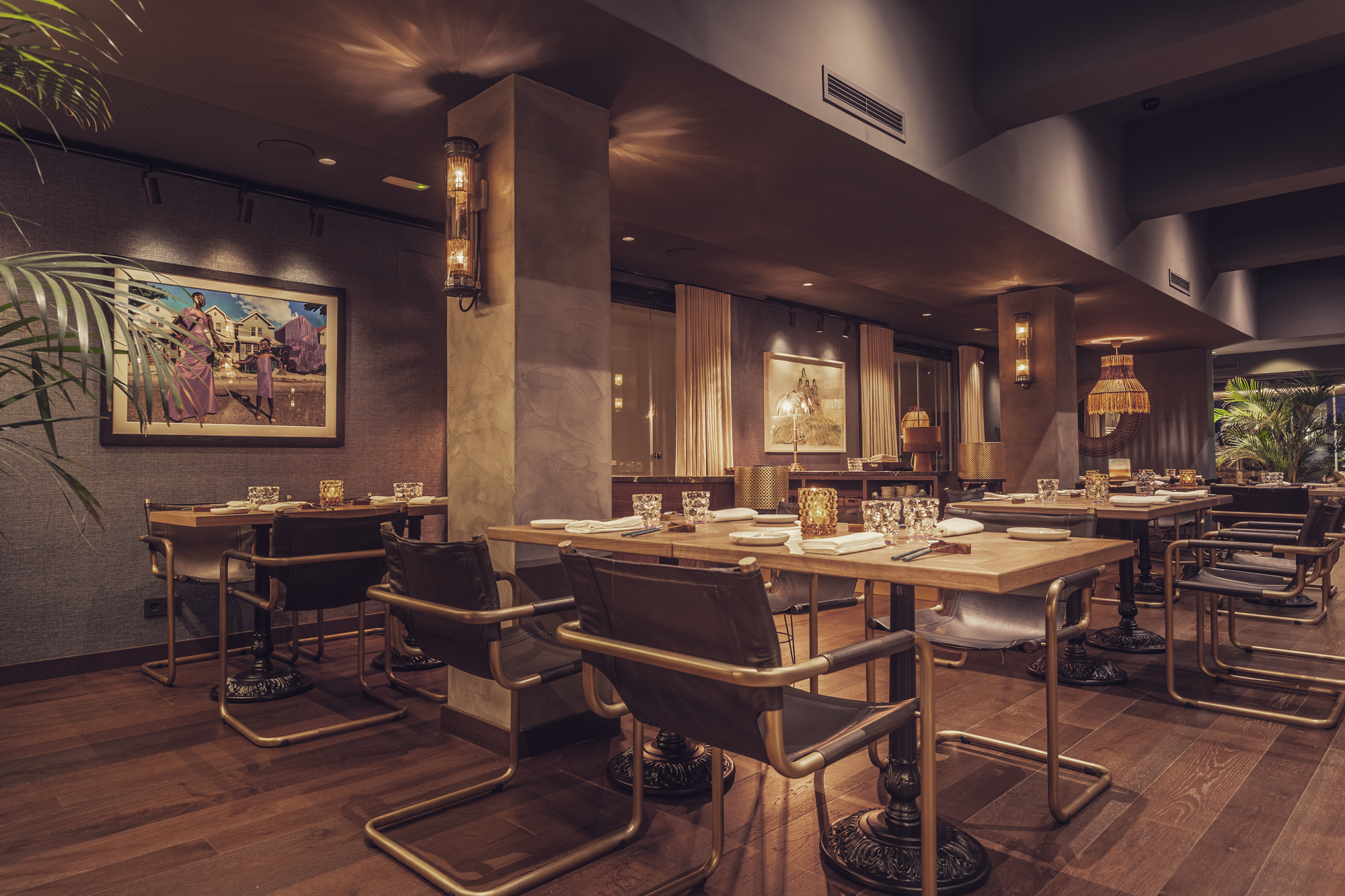 With a breathtaking interior, Boho Club is located in an estate formerly managed by the Swedish government as a place of rest for some of its officials. The paths between the lawns and the tranquillity make you forget that the N-340 is just a stone’s throw away and that the entire urban catalogue of the Costa del Sol unfolds on either side of it.

The restaurant of the Boutique Resort Boho Club offers a fresh, modern, yet also sophisticated and elegant atmosphere. A large open space, with different atmospheres, decorated with rope lamps, which remind us of the proximity of the sea, chandeliers, Italian design furniture and objects and works of art by Henry Hudson and David La Chapelle adorning the walls. 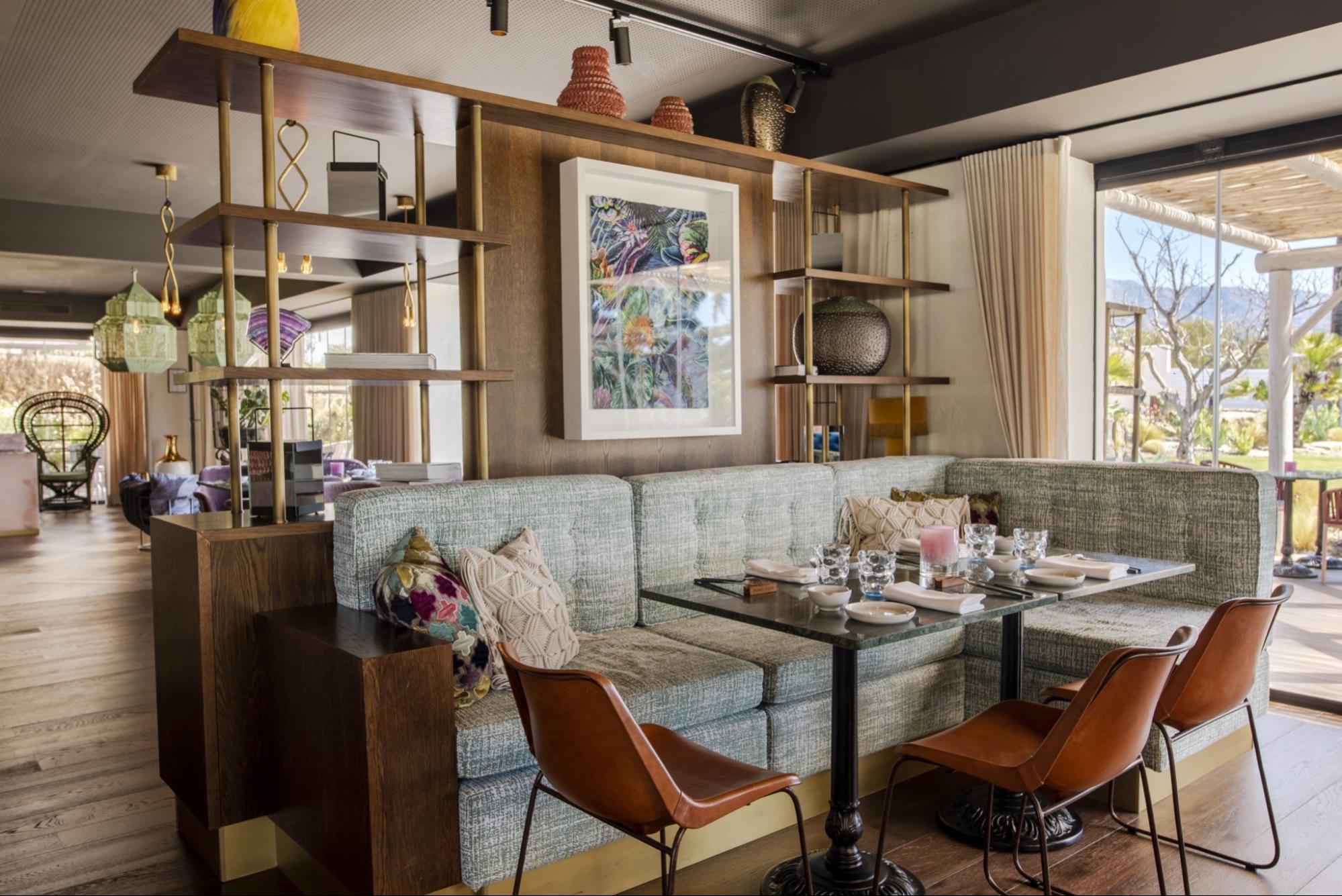 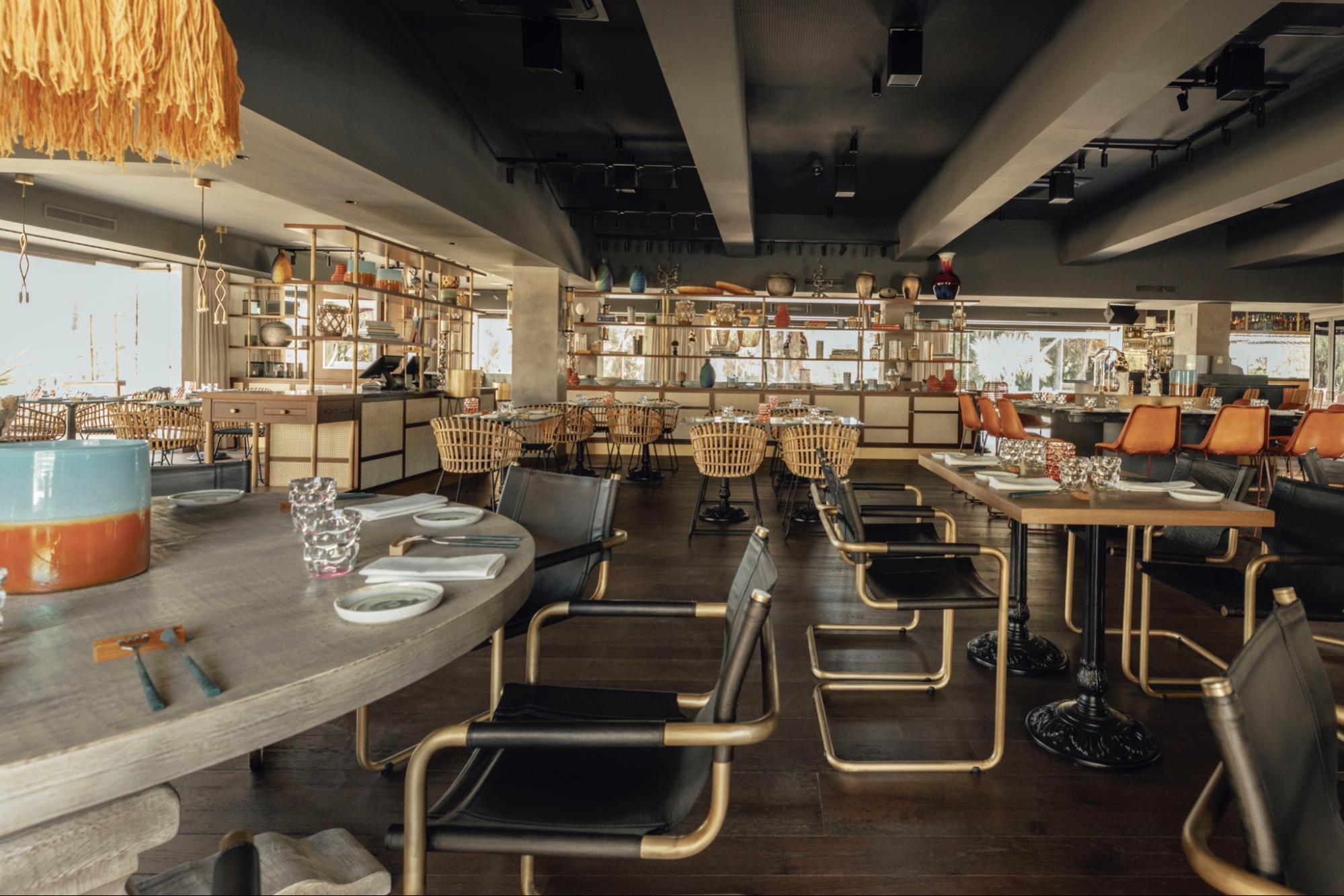 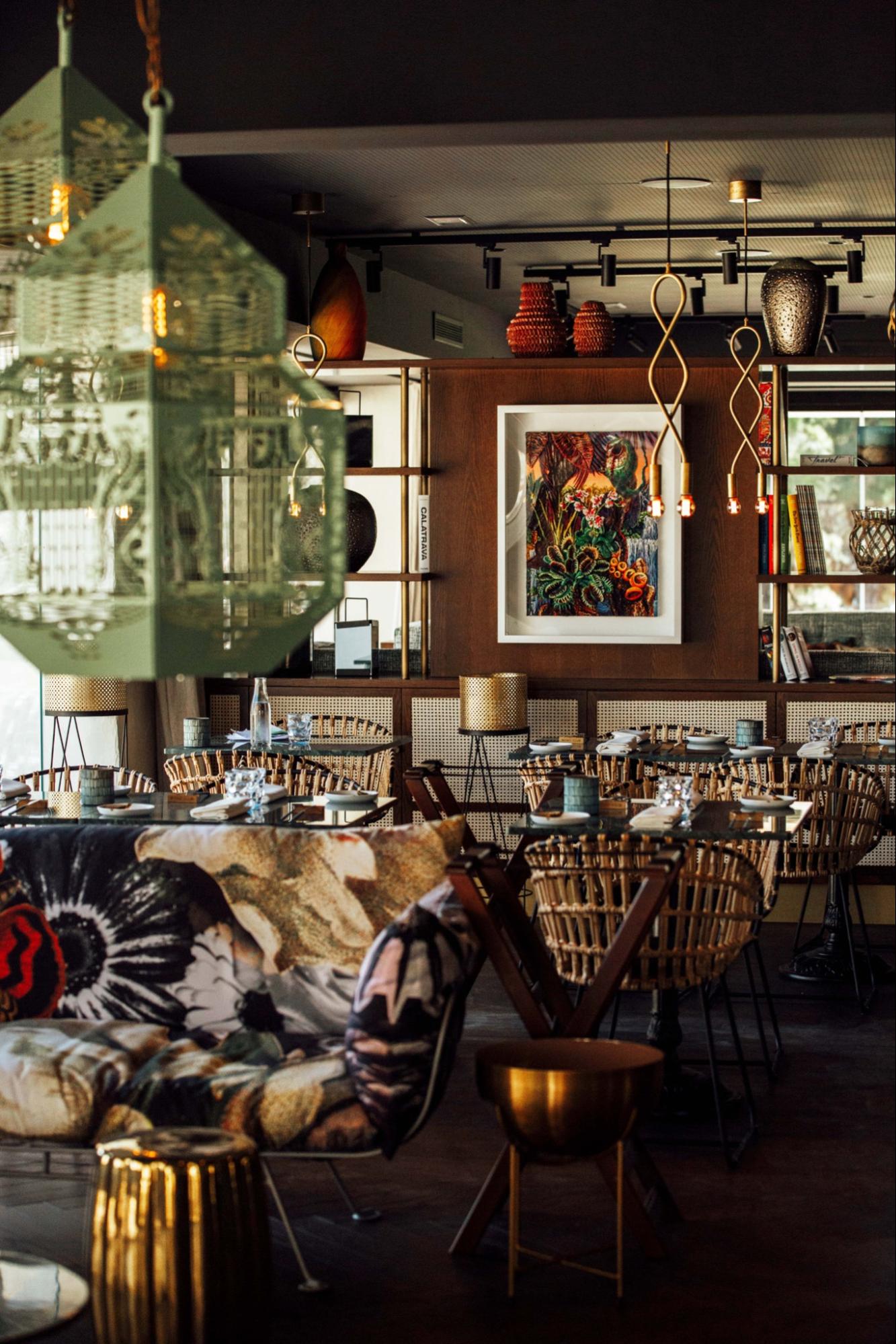 Boho Club’s menu offers a varied proposal in which the diner will find appetising dishes such as the prawn croquettes and their tartar, lobster gyozas with oiled lobster, fish from the market with cavatelli and pickle butter and seaweed, as well as a large selection of grilled meats with a choice of sauces and a varied choice of accompaniments. 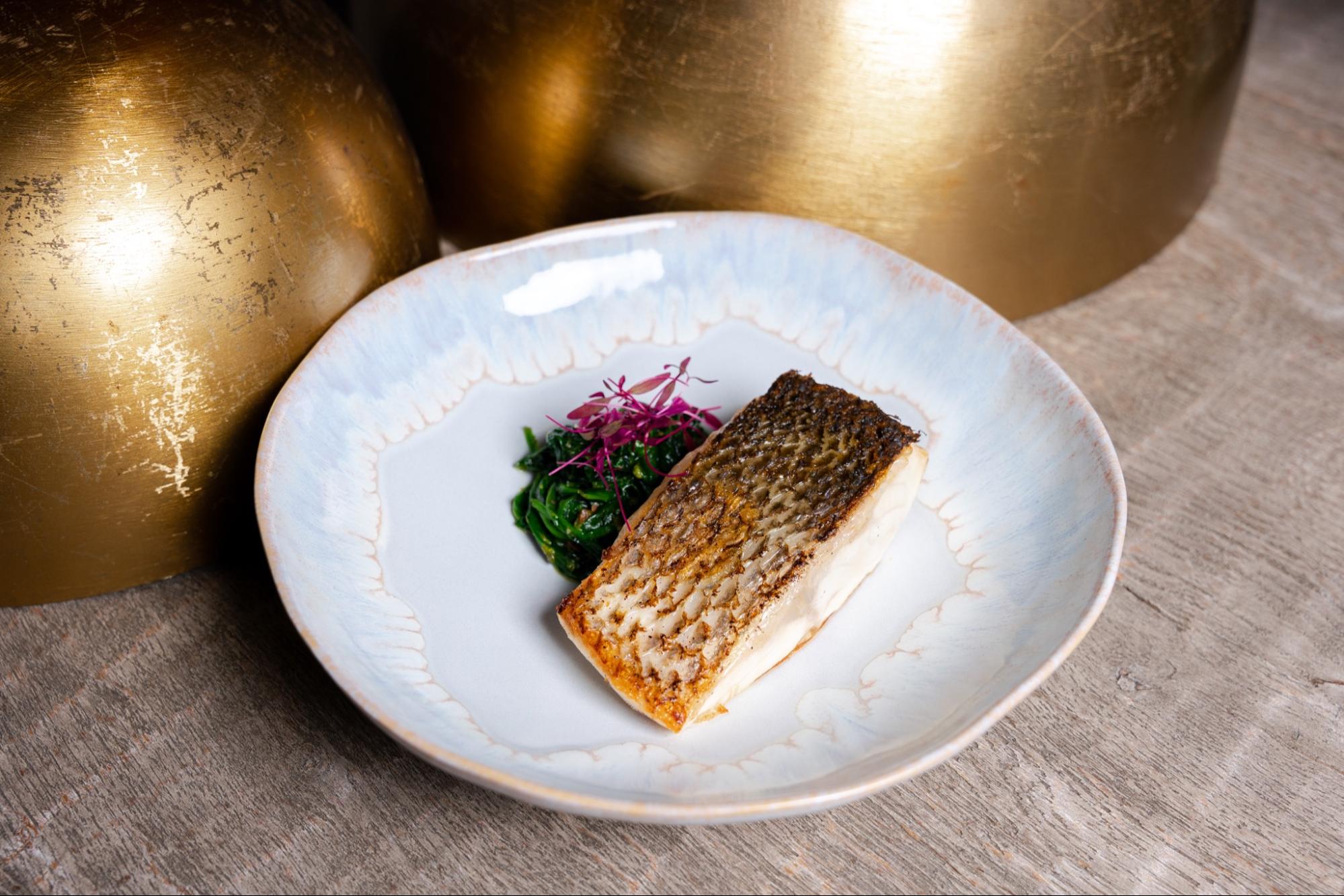 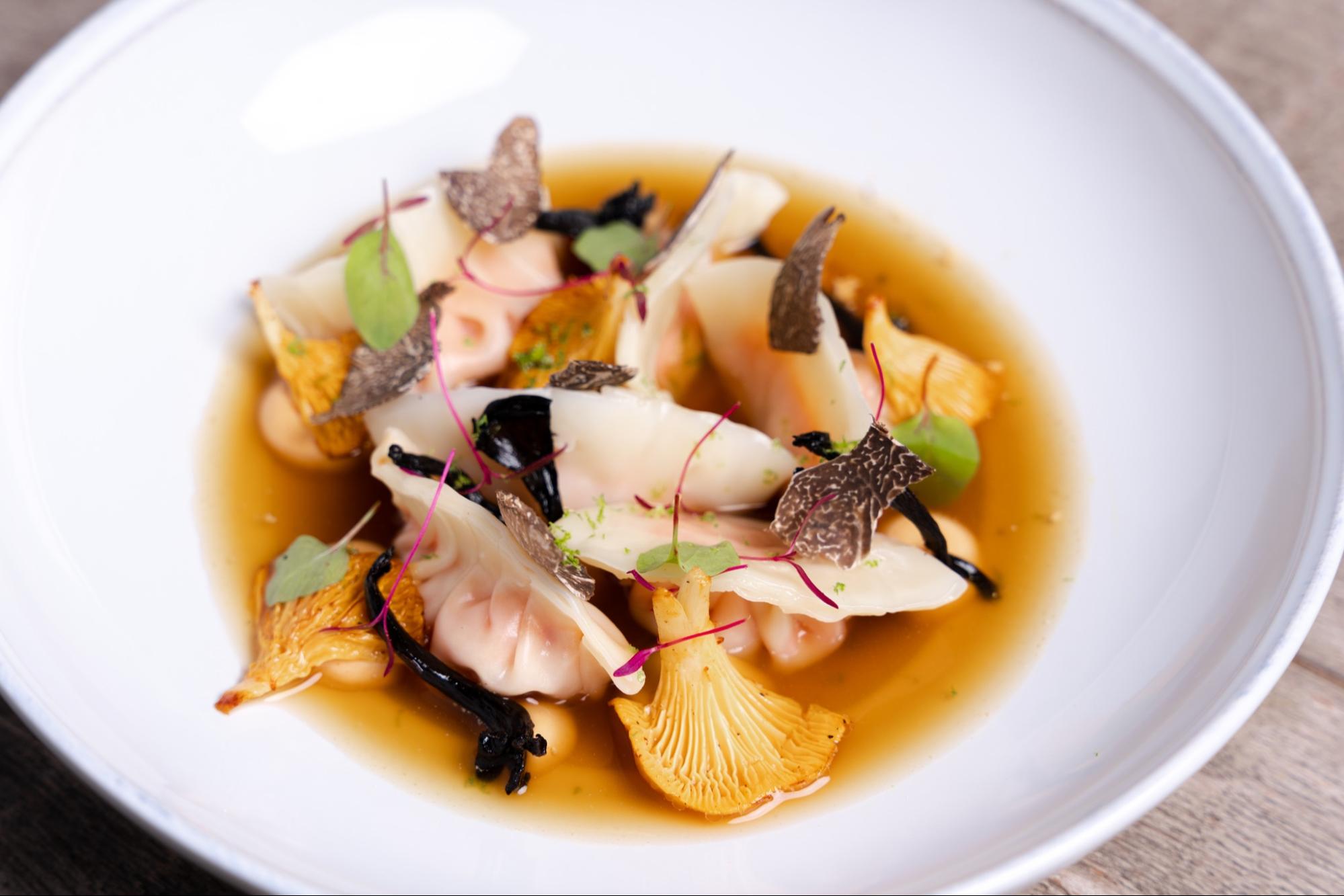 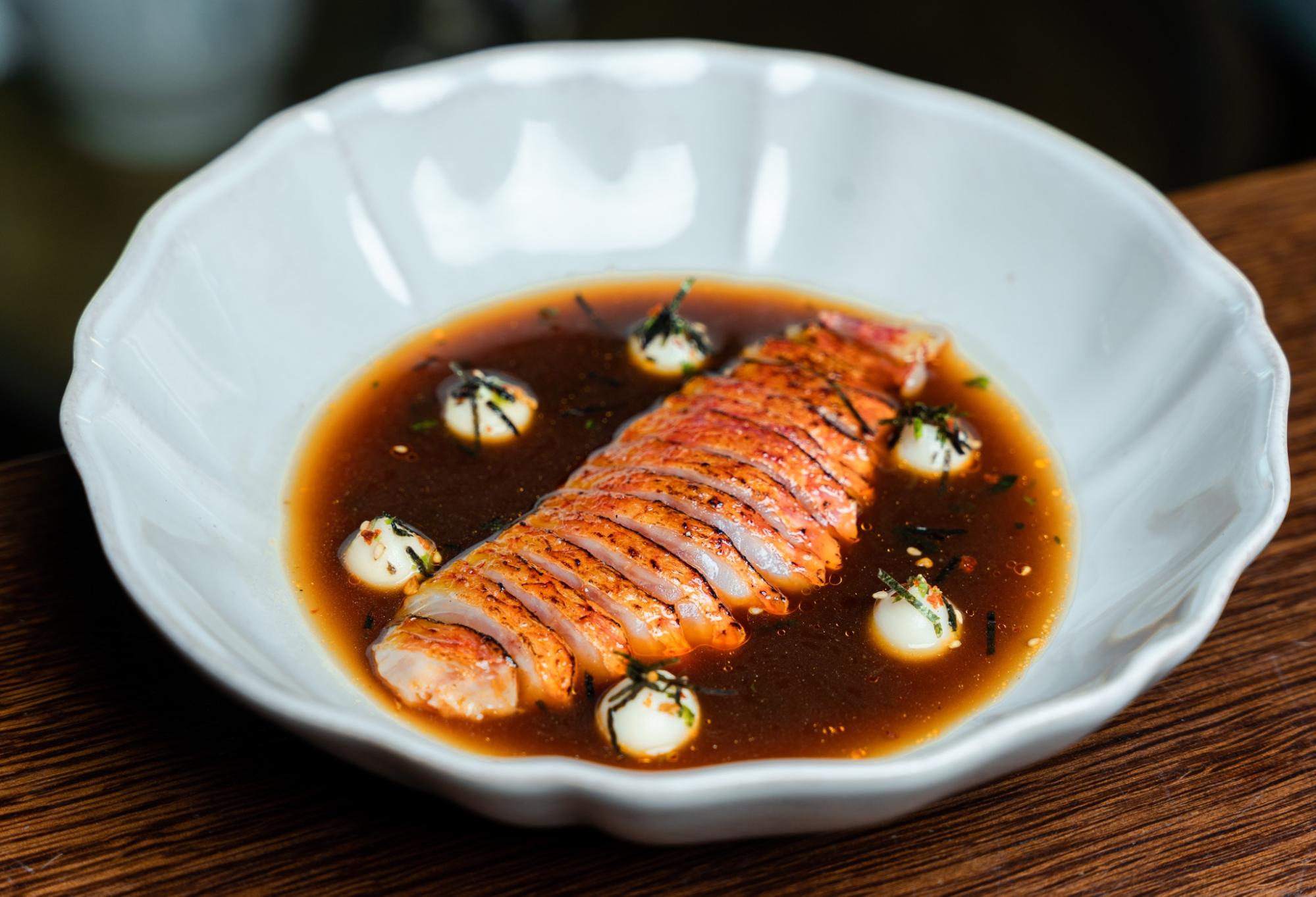 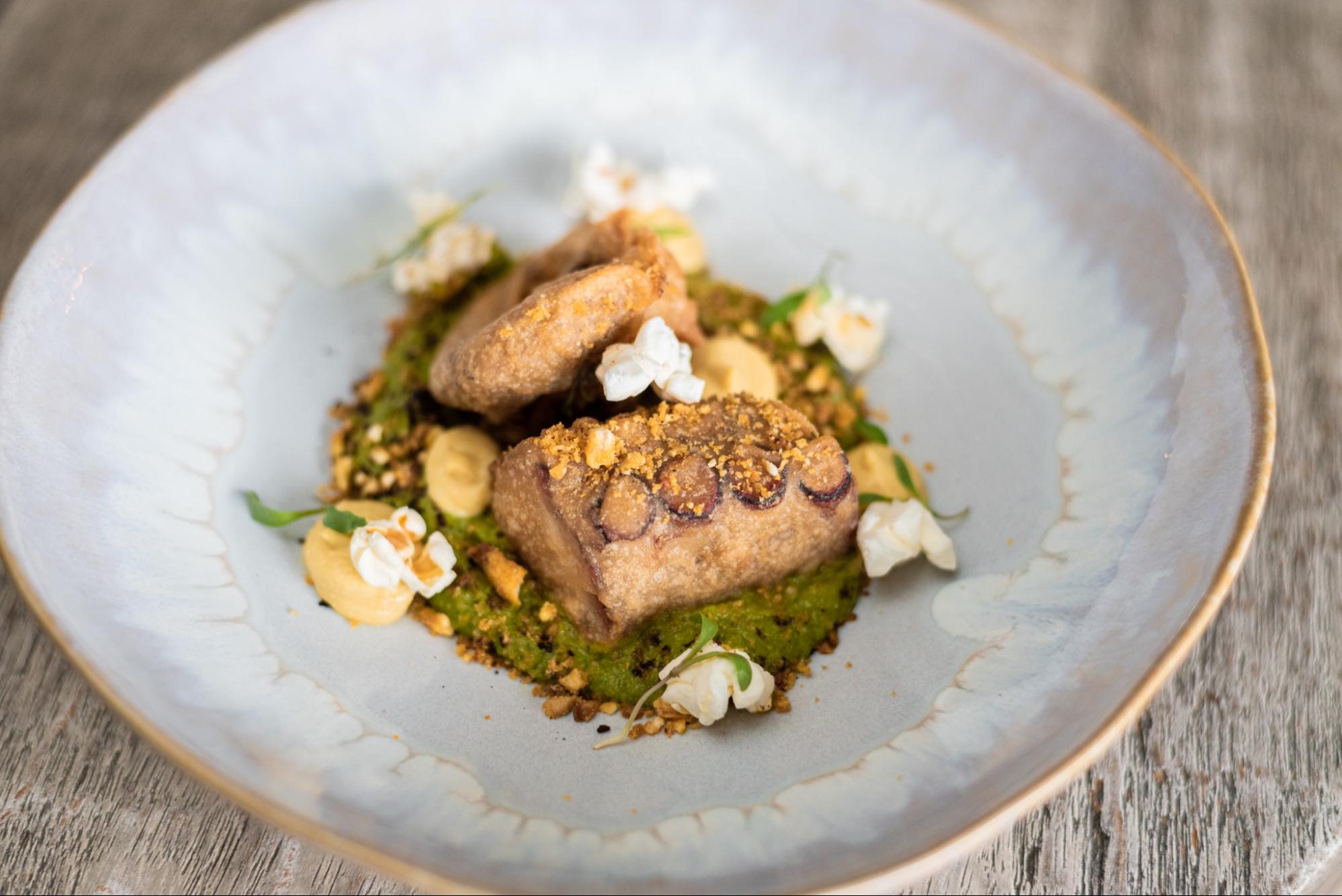 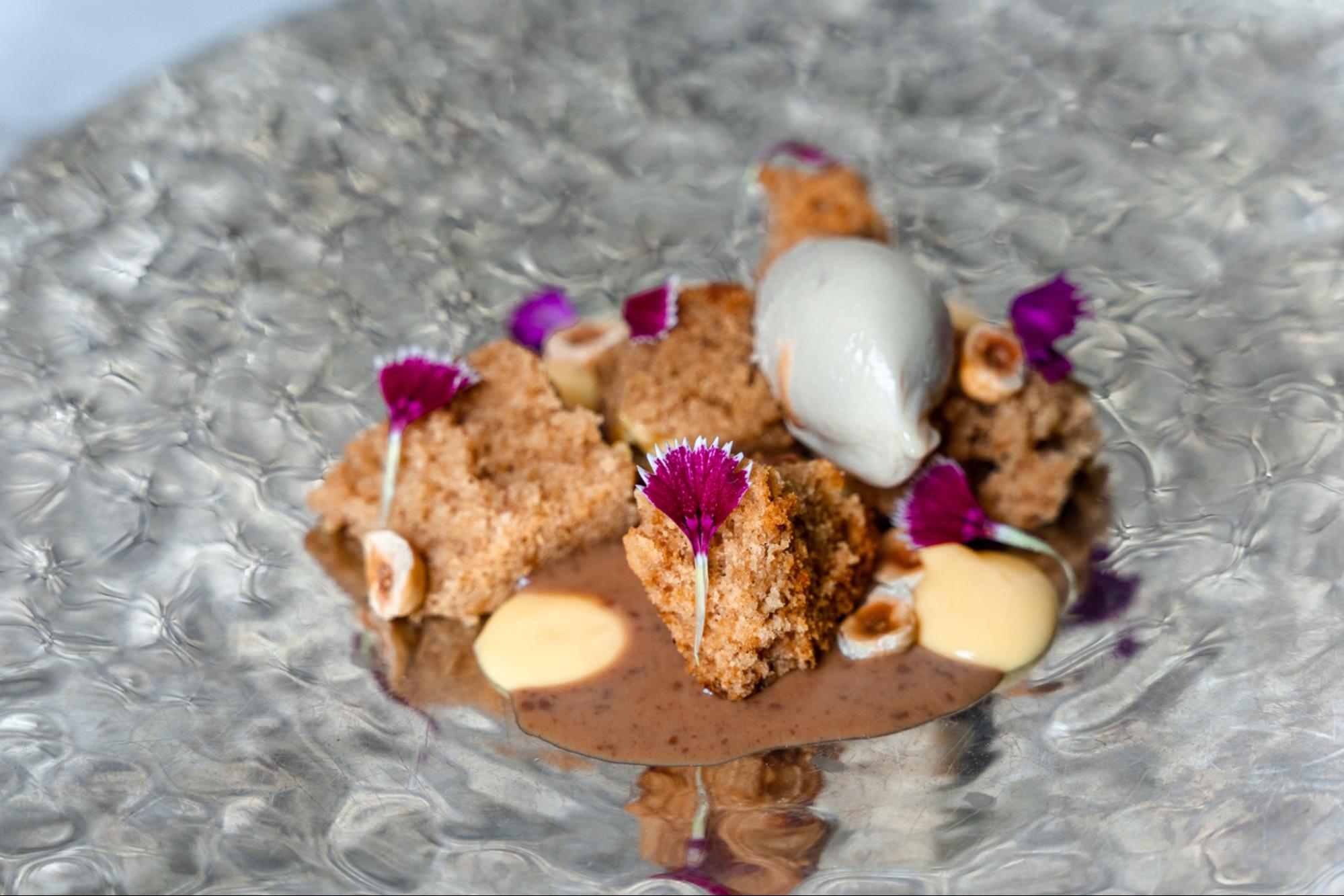 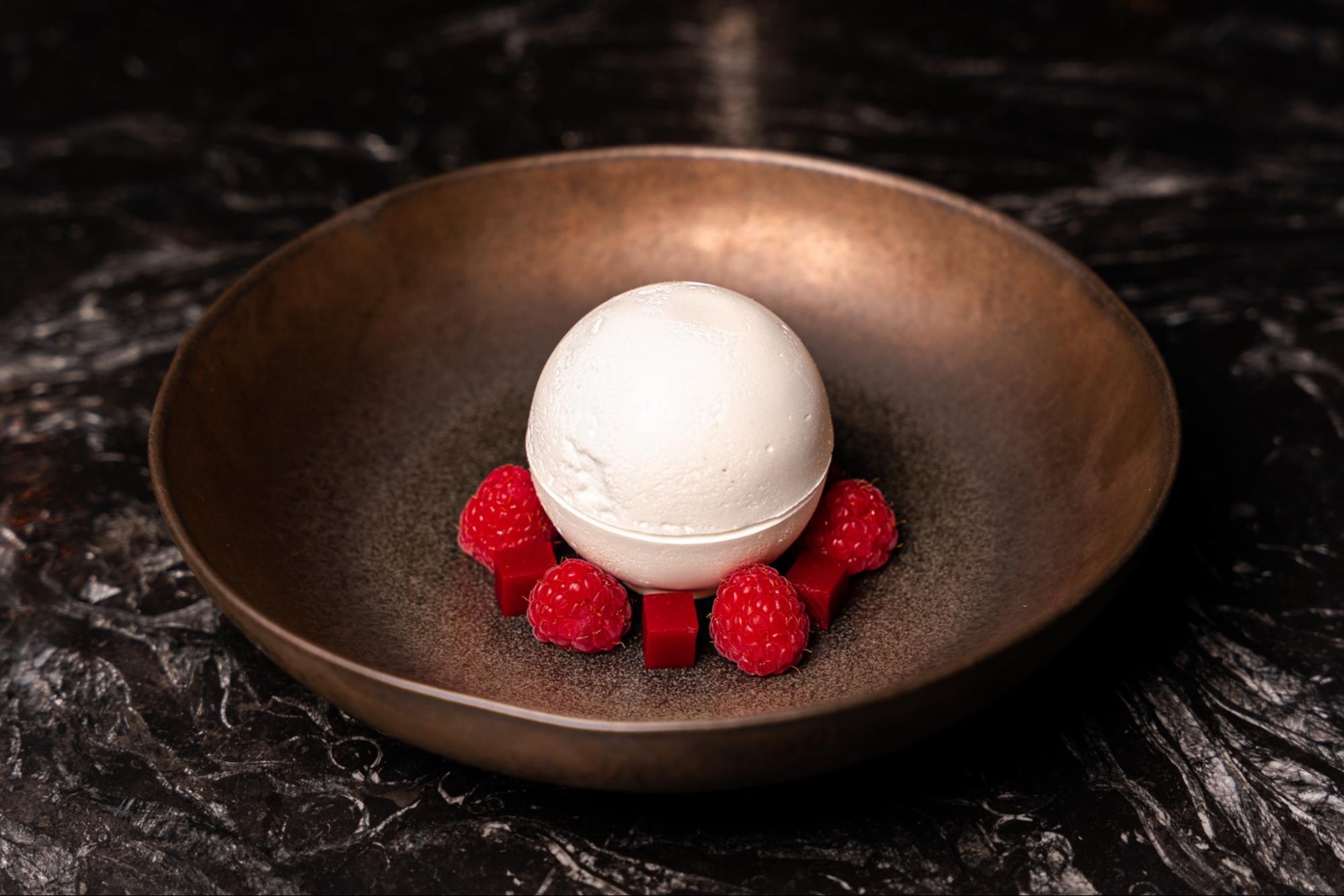 We were fortunate enough to have the chance to dine in this lavish establishment last week.  An aspect that particularly impressed us was the excellent staff service who smiled and were exemplary throughout with their help and advice. We greatly appreciated how they handled the fact we have a small dog and they allowed him to sit under our table with no fuss or problem as they stated no one knew he was there all evening, as he’s small and wasn’t a bother.

The starters were divine and were varied in their presentation. We had the gyozas stuffed with lobster and marinated with avocado corn and sweet potato in the form of like a dumpling,

The other starter was Thai mussels in lime-coconut juice which were large in portion and size. The bread was also served alongside this with four different types all topped with olive oil and they complimented the starters perfectly.

We wanted to see if we could try a different type of dish each and we chose solomillo de angus tenderloin which was cooked to perfection, and sea bass with spinach pistachio pesto and Iberian juice.

The food was perfectly cooked and had a lovely taste all around but what made it is the way it is also served as the kitchen brings it out to the waiter who then prepares it for you and serves it to your table with a smile and a confidence that is impeccable. Overall this was a lovely evening and topped off with desserts of lemon pie and chocolate cake. 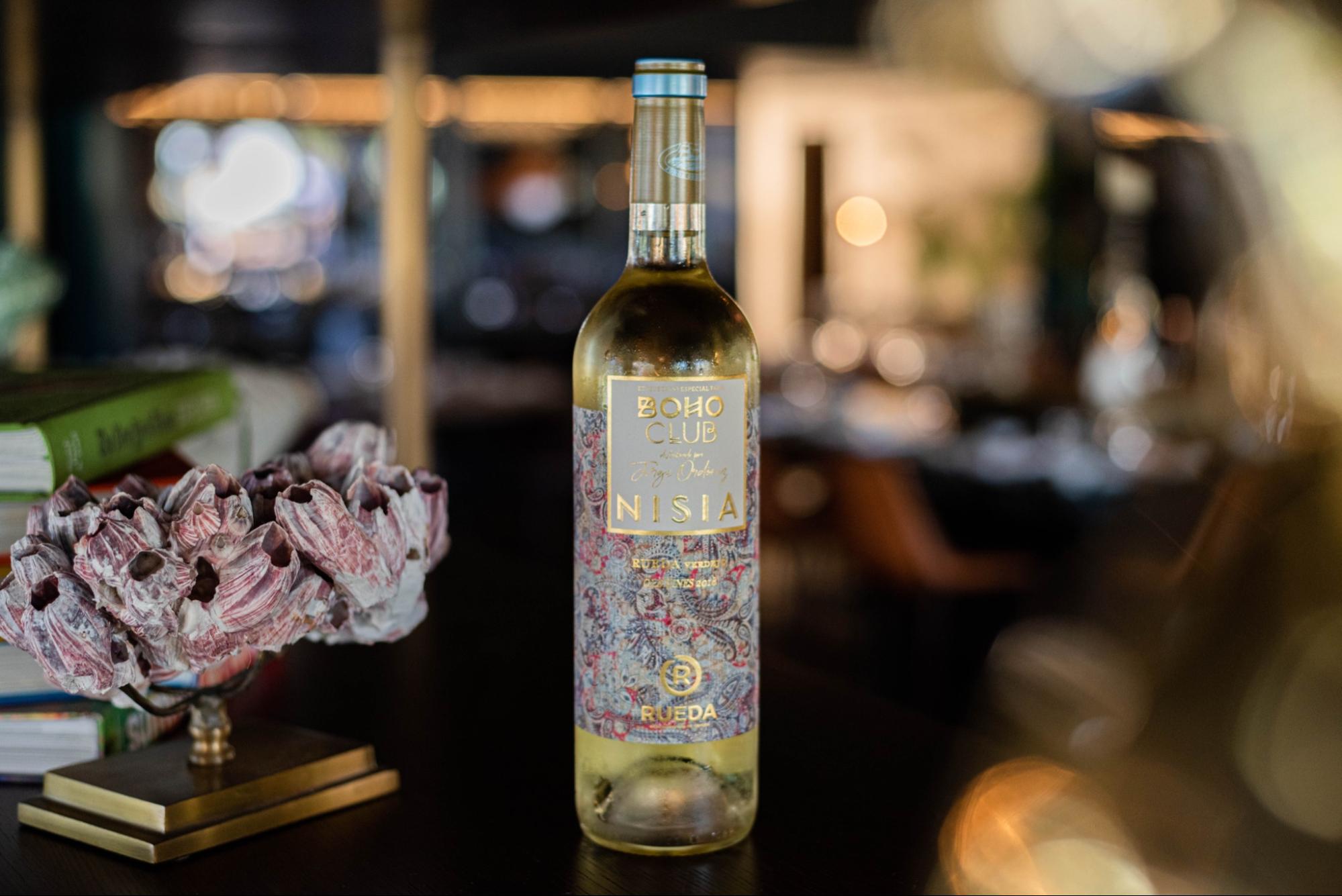 Del Río and his team achieve something really complex in this Boho Club. Appealing to the broader public, they manage to develop their own cuisine, with a sense of place, in which the local produce shines throughout the menu. They’ve achieved the perfect balance of a luxury environment without ostentation at any time and propose a technical and well-resolved cuisine.

Malaga-born chef Diego del Río is the head of the gastronomic venture, honing in on Andalusian cuisine with international influences.

Hailing from Malaga, chef Diego del Río directs the gastronomy at Boho Club. He is passionate about Andalusian cuisine, to which he applies the techniques he has learned over the years of his professional culinary career, combining them with the ingredients and flavours he has discovered on his travels around the world.

Having trained at Le Cordon Bleu school in France, Diego began his career in the great Parisian restaurants and has continued perfecting his craft in Spain. He was at the head of management of El Lago for eight consecutive years, in Malaga, during which time he held the Michelin Star. At Boho Club, he currently presents an honest, authentic cuisine, with a clear commitment to quality seasonal produce. 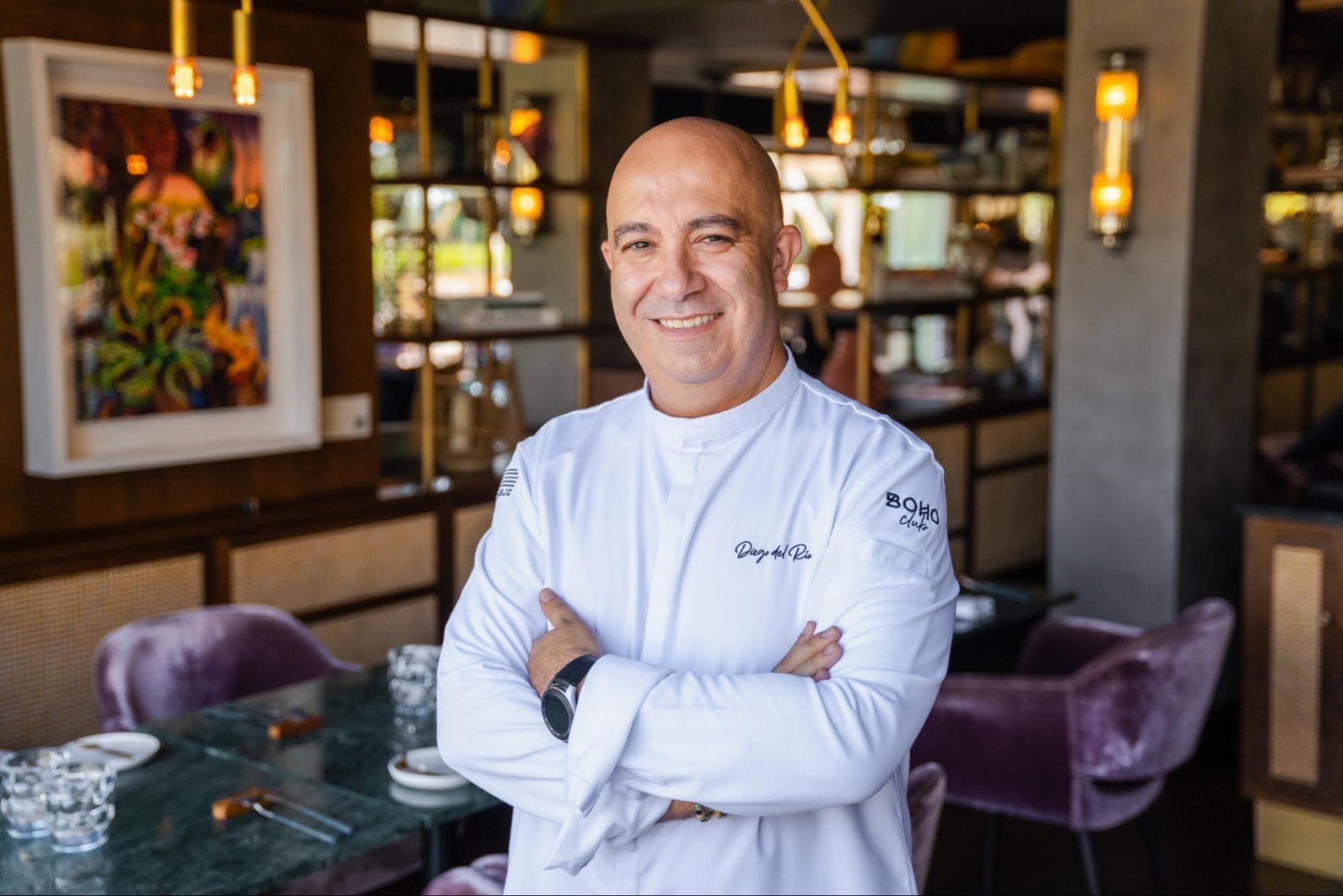