Galicia is an autonomous community with a vast cultural heritage, and a climate and geography that are distinct from the rest of Spain. It has over 1,660 km of coastline, with amazing beaches and offshore islands, and also green wooded valleys. It’s the land of legends, myths, and the pilgrim’s route. It’s also a place with unique gastronomy and famous local wines.

Galicia is located in the green and lush north western corner of Spain, just above Portugal and faces both the Atlantic Ocean and the Mar Cantabrico. This part of the country has an economy based on fishing, farming, agriculture and increasingly tourism. Beautiful beaches fill the bays of three of the four provinces in Galicia and the scent of pine and eucalyptus are ever present. All along the length of its coastline, bathed by the Cantabrian Sea and the Atlantic Ocean, you’ll find areas of spectacular cliffs like those on A Costa da Morte, or the incredible Islas Atlánticas National Park.

“You can also visit its numerous charming villages, both on the sea and inland, and cities such as Santiago de Compostela, A Coruña, Ferrol, Lugo, Orense, Pontevedra and Vigo. And marvel at its many monuments such as the Tower of Hercules or Lugo’s city walls, both designated World Heritage sites by the UNESCO” Spain’s official tourism portal says.

The capital of Galicia, Santiago de Compostela, is the final destination on the Way of Saint James, the famous pilgrim route. We quote Holly Daffurn from Global Grashopper: “The belief that the Saint’s remains were buried here lies at the very heart of the city and has led to the substantial growth of the area. The legend talks of a stone boat that the disciples used to bring St.James’ remains to Galicia. It was thought that the area held a special spiritual attraction. In the 9th century, a bishop was told about a magical rain of stars that fell on a specific spot in the forest. On investigation, he was led to the precise spot where St James’ remains lay. This is why the city was called San-tiago (Saint James) de (of) compo-stela (field-star).”

Galicia’s delicious gastronomy is one of its strong points, and features a variety of typical produce and dishes, including its shellfish, veal, octopus a feira (with potatoes) or the almond tart known as tarta de Santiago. Quoting a local source,“The Vieira, a fan-shaped sea scallop (known as the pilgrim’s shell) is not just the symbol of Santiago de Compostela, but also a regional delicacy. The Vieira harvested off the coast of Galicia are tastier and plumper than those found in the rest of Spain. They can be eaten either, directly with a squeeze of lemon, with a splash of Albariño wine, or more exotically coated with bread crumbs and spices” the online Galicia Guide says. Among two of its most famous wines, Ribeiro and Albariño each have their own Wine Route, and there’s also the popular “queimada” to try, alcoholic spirits set alight in an earthenware bowl according to the typical ritual. 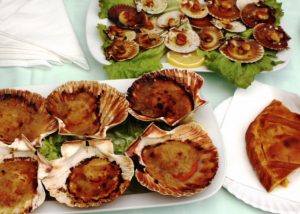